You have to really, really want to get to this simply charming island in Nicaragua and, as our Little Corn Island travel guide reveals, there are plenty of tempting reasons to make the journey including snorkeling, beaches, great food, island characters, and charming hotels. 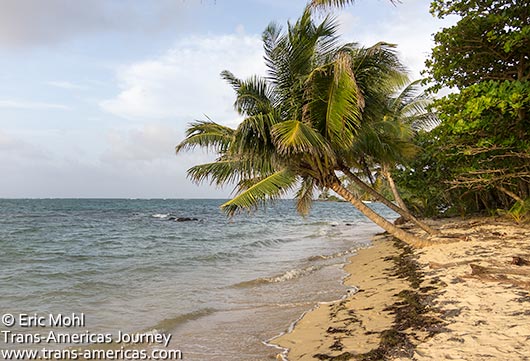 A “crowded” stretch of beach on Little Corn Island in Nicaragua.

Getting to Little Corn Island

There’s no direct way to travel from mainland Nicaragua to Little Corn Island which is located about 45 miles (100 km) east of the country’s Caribbean coast. First, you’ve got to get to Big Corn Island (find out how), then you need to catch a water taxi (essentially a very long, very exposed motor boat) for the journey to Little Corn Island.

This transfer costs around US$6 and takes 30 to 60 minutes depending on how rough the passage is (heading to Little Corn is often rougher because you’re going against the current). Pro tip: Bring some large plastic bags to cover your luggage. If you forget to bring bags you can buy some from general stores near the dock.

We were told there was a plan to start seaplane service from the mainland to the Corn Islands but the seaplane is currently “parked” on Lake Nicaragua near Granada and no one in the area expressed much hope that the service would ever materialize.

Once you’re on Little Corn Island you’ll be walking or taking smaller water taxis everywhere. There are no roads and absolutely no motorized vehicles on Little Corn Island. We expected that there would be a few sneaky exceptions to this rule but over our five-day stay we never saw so much as a moped.

As you can imagine, the carelessness creates an instant luscious disconnect from the noise and pace of the rest of the world. If you can’t relax here there’s nothing we can do for you. 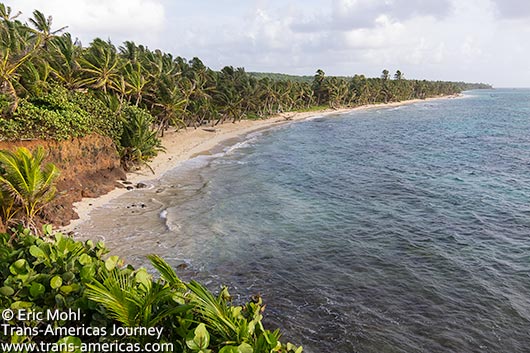 The view down to the beach from Casa Iguana on Little Corn Island in Nicaragua.

What to do on Little Corn Island

Snorkeling and SCUBA diving are the big activities on Little Corn and there are many more dive shops here than on Big Corn. When we were on Little Corn a group of guys was also getting ready to open a windsurfing business on the island, so check into that if that’s your sort of thing.

Or you can just let the heat and the slow, Caribbean pace of the place work their relaxing magic. We certainly heard the siren song of the hammock. 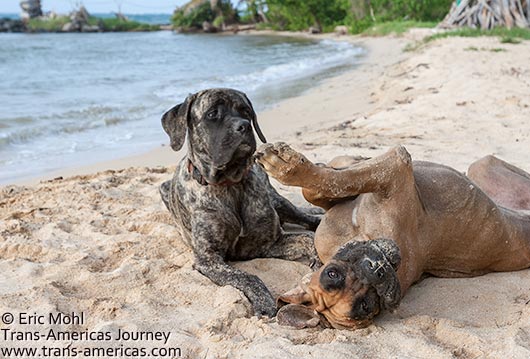 The “entertainment” at Farm Peace & Love on Little Corn Island.

Where to eat on Little Corn Island

There is an extraordinary amount of good food on Little Corn Island. They’re not the cheapest meals you’ll have in Nica, but for around US$10 a plate you can eat very, very well at stylish beachfront places like Cafe Desideri and the nearby Tranquilo Cafe where expats (mostly Italians for some reason) have created tasty hangouts. We also heard rave reviews of the authentic Cuban food at Havana but at more like US$20 it was too spendy for us. Some dishes, like their famed ropa vieja, need to be ordered in advance.

There are cheaper eats as well. For example, we loved Rosa’s, a tiny open-air place on the south end of the island near Casa Iguana for breakfast. About US$3 got us fruit salad, coffee, eggs, bread…the whole shebang.

A disappointment was the three-course dinner, served family-style, at Casa Iguana which cost US$15 per person and was really nothing special. 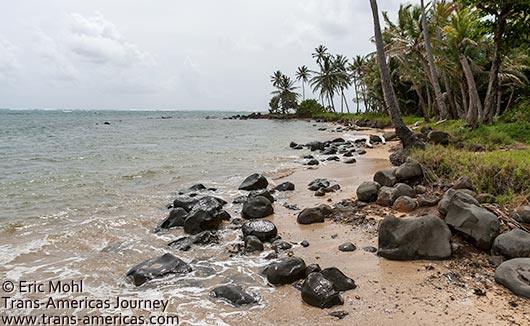 This beach was just steps away from our little bungalow at Farm Peace & Love on Little Corn Island.

Where to stay on Little Corn Island

When we arrived on Little Corn Island a man named Bing was waiting to ferry us to the other side for our stay at Farm Peace & Love in his boat. We cannot imagine a better introduction to the charms of Little Corn Island. 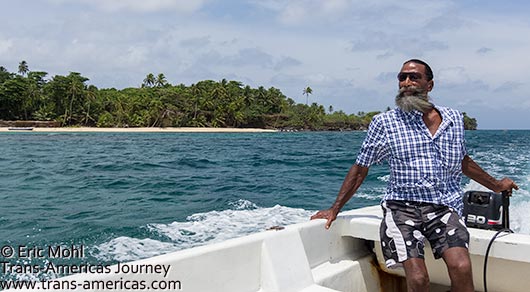 This is how Bing, co-creator of Farm Peace & Love on Little Corn Island, commutes to work.

Bing’s boat is named “Peace & Love” and that’s what he and his partner, Paola, are all about. Paola, an Italian journalist, and avid horsewoman arrived on Little Corn years ago with her saddle. Bing had the only horse on the island. The rest is history. 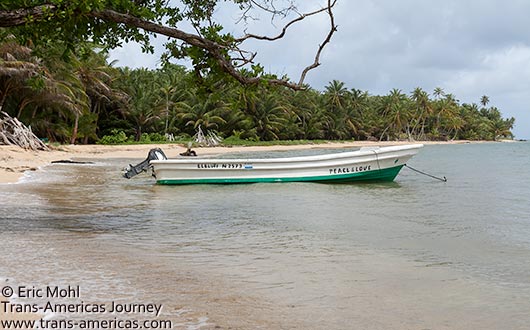 In 1996 they opened Farm Peace & Love on the still sparsely developed northern end of the island just a few steps from one of the sweetest little beaches on the island. The place is powered by solar energy and a wind turbine fashioned out of an airplane propeller and wood. Like Farm Peace & Love itself, the thing is half art, half tool. Bing and Paola live in a hand-crafted two-story home on the property and offer just two extremely private stand-alone casitas to guests. 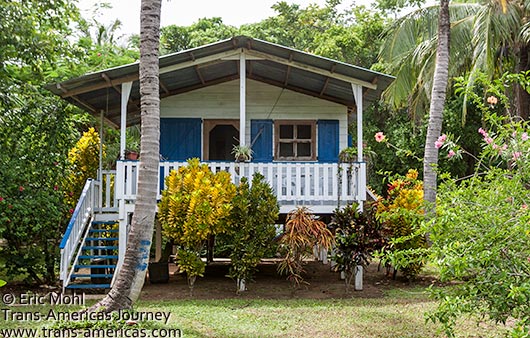 This the larger of the two casitas for rent at Farm Peace & Love on Little Corn Island.

Each has its own well-equipped kitchen and eggs and fruit from their chickens and organic garden plus coffee, homemade jam, house-pressed coconut oil, basic condiments, and Paola’s delicious coconut bread are supplied. As other things ripen (basil, beans, limes, plantains) they magically appear on your porch (you’ll need to bring all other ingredients from the general stores near the dock in Big Corn Island which have the basics and not much else). 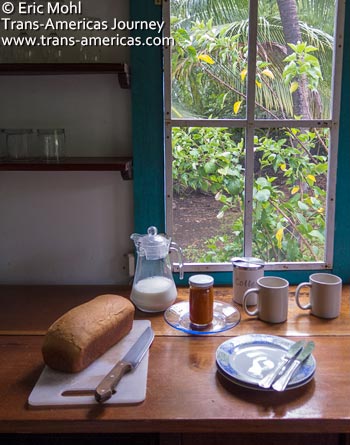 Paola’s famous coconut bread, homemade jam, and more produce from the farm made breakfast a treat at Farm Peace & Love.

We stayed in the smaller of the two casitas (which sleeps three and is called The Suite). It had an outdoor shower stocked with homemade coconut oil soap and a breezy porch with built-in wooden seating and a table. Ocean views were blocked by a wall of jungle but the soothing sound of the waves made it through. 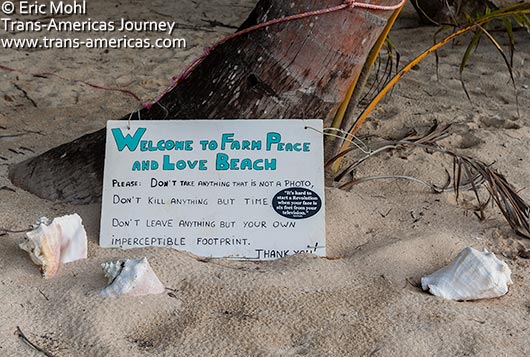 There’s nothing to do at Farm Peace & Love except swim in the warm, clear water, play with the dogs, watch the land crabs do their crabby thing all over the place (mind the holes), nap, read, repeat. The “relaxation now” vibe was so intoxicating that Karen finally did the crossword puzzle she’d been carrying around for 10 months. Those feeling more energetic can go fishing or horseback riding with Bing.

On our final night, we splurged on dinner prepared by Paola and Bing (about US$18 per person) which included pasta with a sauce made from tomatoes, basil, and cashews followed by fresh jack fish caught by Bing with rosemary potatoes. The best part was the grounded, spiritual company of Paola and Bing who are content with what they’ve created, as they should be. 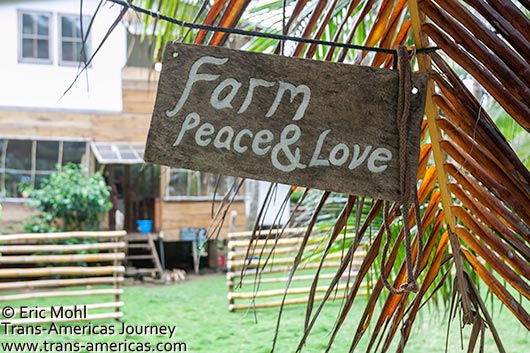 Much of Farm Peace & Love is made by hand, including this sign.

We also stayed at Casa Iguana which is a brightly painted Caribbean version of every backpacker ghetto hostal you’ve ever stayed at. Guests turned into staffers or volunteers run the place, clothes dry on railings, books are exchanged, dive reports shared and well-worn flip-flops pile up outside the lounge/restaurant/bar area. 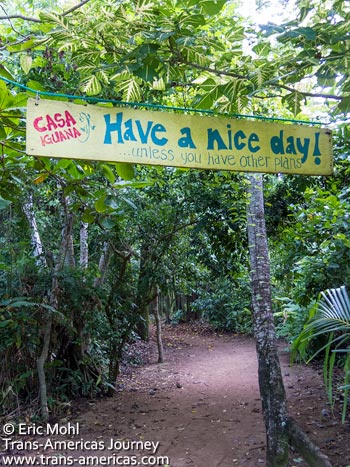 Yemaya Island Hideaway Resort & Spa opened after our time on the island and is, by far, the most luxurious (and priciest) resort option on Little Corn Island. 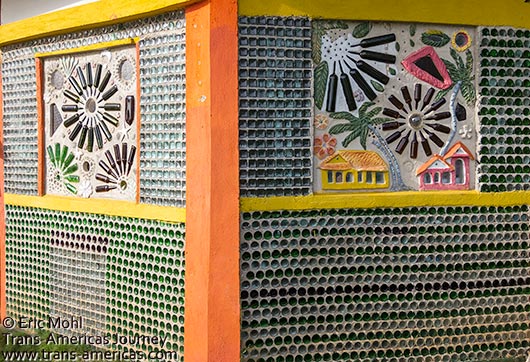 We walked past this shop, constructed with hundreds of empty beer bottles, every day on Little Corn Island.