Tamarindo, on the Nicoya Peninsula, started out as Costa Rica’s down and dirty surfer travel secret but the ensuing years have brought a remarkable amount of chic to to this surf town as well. The result is a kind of seaside schizophrenia to suit all travel budgets playing out on one of the most gorgeous, sweeping, inviting beaches in Costa Rica.

Any way you look at it, Tamarindo Beach, on the Nicoya Peninsula, is one of the most beautiful beaches in Costa Rica.

The surf side of Tamarindo

Joe Walsh, owner of Witch’s Rock Surf Camp, still pretty much looks like the 20-year-old Cali surfer that he was when he arrived in Tamarindo in a school bus in 2000. It’s fair to call Joe an early adopter, but Tamarindo wasn’t exactly undiscovered when he arrived. Some of the footage for the 1966 surf classic “The Endless Summer” was shot in Tamarindo. 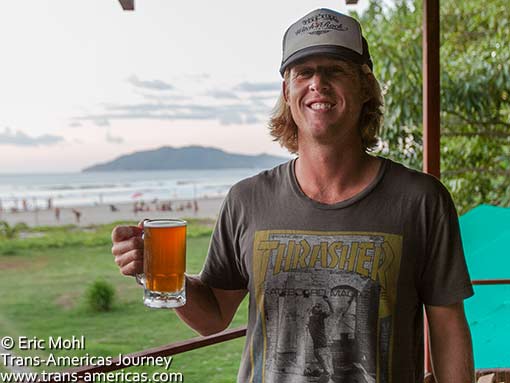 Even Witch’s Rock has chiced up over the years. Today, it’s a pretty swank (in a sandy kind of way) 18 room guest house with numerous boats, boards, and instructor plus a lively restaurant and bar.

Speaking of the bar…Did we mention the craft brewed beer? In 2011 Joe opened Volcano Brewing Company on the shores of Lake Arenal. The microbrewery makes pale ale and a nut brown ale (both delicious) and he sells every drop between the brewpub and restaurant on Lake Arenal and his bar in Tamarindo (US$3 for 12 ounces/30 ml). 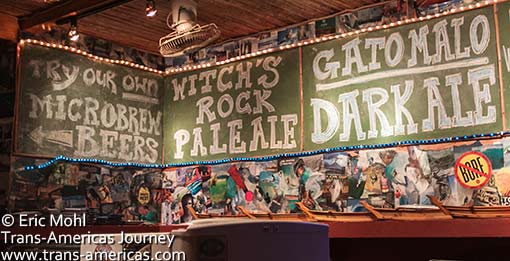 The chic side of Tamarindo

Like in many Costa Rican beach towns, condos and timeshares jockey for space among surfer flop houses, international chain hotels, and tour bus traveler crash pads in Tamarindo. To reach the real chic you have to go travel to nearby Langosta Beach. There you will find Cala Luna Hotel. 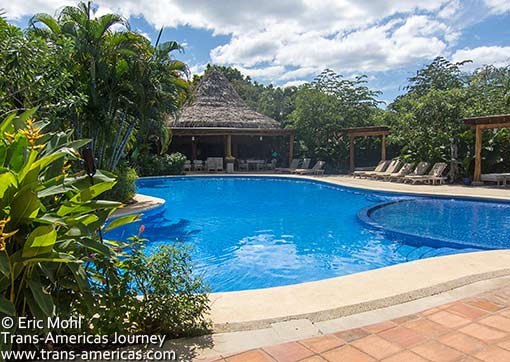 The pool at the chic Cala Luna Hotel near Tamarindo, Costa Rica.

Back in the loving hands of the Pilurzu family which originally built the hotel, a recent renovation has instilled real understated elegance to its 21 rooms and 20 villas (some with private pools). Aesthetics aside, Cala Luna also features a huge new open-air yoga pavilion where free morning classes are offered to guests and an on-site organic garden which gives their new food and beverage manager plenty to work with. 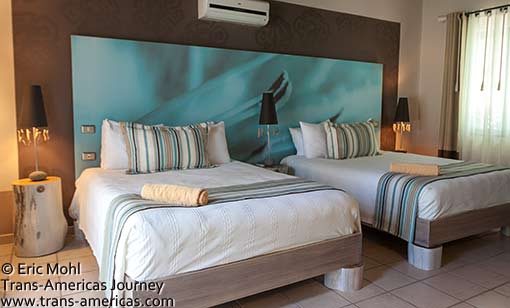 Inside the Cala Luna Hotel, one of the chicest offerings near Tamarindo, Costa Rica.

We couldn’t leave Tamarindo without meeting (and eating with) Chef Shlomy, a local culinary institution who now heads up Seasons by Shlomy restaurant. Israeli born Shlomy Koren opened Seasons in 2007 and he now turns out what he calls a “mélange of styles” of cuisine. We call it Med Rica.

Ninety percent of his ingredients are sourced locally and Shlomy, a Cordon Bleu trained chef, turns them into inventive dishes like sautéed octopus on tahini with chick peas, shrimp (14 of them!) and spinach over house-milled polenta that’s sweet and rich and nothing like the Cream-of-Wheat-esque packaged stuff. There’s also homemade ice cream and sorbet and even homemade bread. 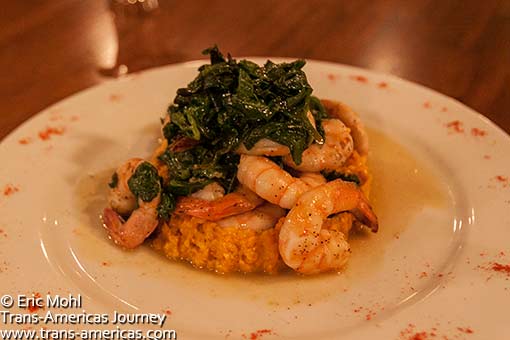 This is what’s for dinner at Seasons by Shlomy restaurant in Tamarindo, Costa Rica: shrimp and spinach over sweet, rich house-milled polenta.

“Consistency is the name of the game,” says Chef Shlomy who cooks every entree himself (large appetizers from US$9, entrees from US$18, no credit cards). His US$28 prixe fixe including an entree, main, and dessert chosen from any item on the menu is a bargain. 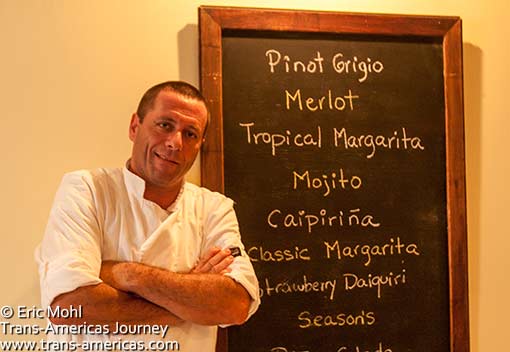 Chef Shlomy at his restaurant in Tamarindo, Costa Rica.