You would never plan a visit to the town of Rivas, Nicaragua. However, you may find yourself stuck there for a night since it’s the closest town to the Costa Rican border just 22 miles (36 kilometers) away and only a few minutes from the landing for ferries to and from Ometepe Island. We actually passed through Rivas more than once and here’s the travel survival guide we wish we’d had. 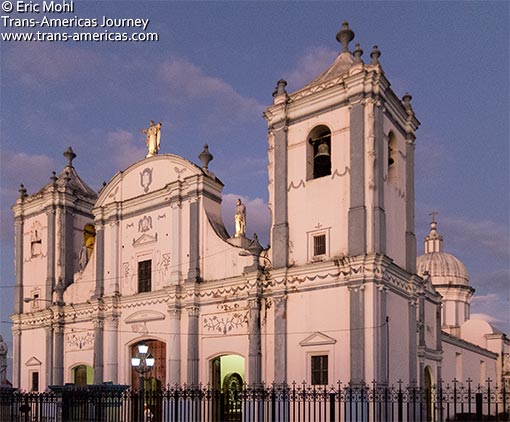 The church in Rivas, Nicaragua is one of just a handful of sights in this town that travelers past and present pass through.

Rivas is so close to the Costa Rican border that its frequented by Costa Rican expats making a border run to renew their visas. This means there are also unsavories in Rivas looking to prey on travelers passing through. We certainly found one such unsavory when we headed to the market area in Rivas to change some money–a routine, legal and normally safe activity in Nicaragua.

We found a dude, made the transaction and got about 1.5 steps away from him when Eric realized he’d shorted us by showing us the total on a calculator but cooking the number slightly. We returned, explained the concept of math and got our missing money. We got ripped off again, however, when we asked for the rates at the only parking lot in town that was big enough to take our truck, then the attendant demanded more once we were parked.

Choose your hotel wisely in Rivas

Don’t even consider the truck driver flop houses out on the main highway and even in town many of the cheap hotel and hostel options were appallingly filthy. After much searching we finally found Casa Lidia where US$18 got us a tiny double room with a TV, fan, Wi-Fi, and a shared bathroom. Weirdly, check out time was 10 am, but whatever. At least it was clean.

The decidedly motel-like Nicarao Inn used to be the best place in town and it’s still a reliable, if soulless, choice. For more personality and something approaching local charm head to La Mision Hotel which was opened in 2011 in a restored 100 year old home. There are five rooms here with tiled floors, a mish-mash of antiques, high ceilings, Wi-Fi and A/C around an airy central courtyard plus parking. The place isn’t fancy, but it does have character and history in a homey kind of way and the reasonable rates include a delicious breakfast made primarily with ingredients from the owner’s nearby farm.

Speaking of eating in Rivas…

There’s a large and decent mid-range place on the main plaza in Rivas, a smattering of coffee shops and bakeries around town, and the owner of La Mision, who is also a trained chef, had plans to open a restaurant called Mango serving gourmet typical Nica cuisine. Let us know if that ever happened. Chuckle at the “Pizza Hot” across the street from the main cathedral but don’t eat there. If steak is your thing, look for the reportedly good (but not cheap) steak house just past Pizza Hot.

If you travel a bit south of Rivas, near the turn off for San Juan del Sur in the village of La Virgen you will reach one of the most unusual hotels in Nicaragua. Nicaraguan Dennis Martinez became a baseball superstar in the United States, pitching for the Baltimore Orioles, Cleveland Indians, Seattle Mariners, Montreal Expos and the Atlanta Braves during his 22 year career. He was the first Nicaraguan to play in the major leagues and was nicknamed El Presidente. He helped the Orioles win the World Series in 1983 and in 1991 he pitched a perfect game. He’s a big, big deal.

When Martinez retired from the game and returned to Nicaragua he opened the La Mar Lake Resort. Located on the shores of Lake Cocibolco (aka Lake Nicaragua), the property now seems all but deserted. When we pulled up a few staffers were busy making their lunch and they gave us a sideways glance as we wandered around the property. There wasn’t a guest in sight and it didn’t seem like there’d been one in ages. Even the regulation baseball field Martinez built on the grounds had seen better days.