Thoughts on Swine Flu in Mexico

The idea was to wander back to Mexico City and catch a flight to Havana so we could travel around Cuba for a few weeks. Then swine flu (aka H1N1 or just the “Snoutbreak”) got in the way. 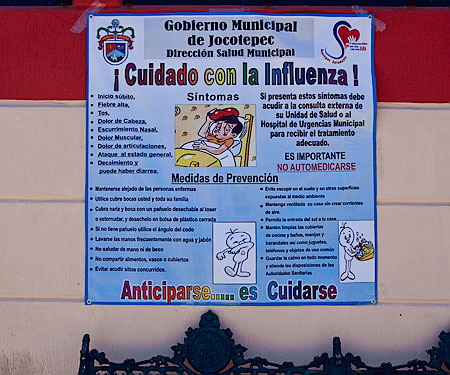 Cuba’s suddenly become a hot topic in the news with high level government officials suggesting the US travel embargo should finally be overturned. That would make travel to Cuba legal for US citizens, so we were anxious to get there before the flood-gates opened.

However, a few days after we arrived in Ajijic to visit our friends Tom and Iliana and their kids David and Cristina there was sudden talk about a virulent flu breaking out all over Mexico and beyond. A few days later, Mexico City and most of the country was virtually shut down and flights to many countries, including Cuba, were canceled. We weren’t going anywhere.

Instead of whining, we chose to see this setback as an opportunity to settle down for a few weeks with friends, catch up on work and tackle some long overdue projects like building this new blog–a task that had been on the “To-Do” list for way too long.

Ultimately, schools and most public spaces in Mexico were closed for nearly three weeks before things finally stared getting back to normal which means that fewer and fewer store employee squirt disinfectant on your hands as you enter and fewer and fewer people are wearing face masks (even if most of them wore the masks as necklaces or headbands).

The so-called “Snoutbreak” turned out to be little more than the regular flu sensationalized by the media and perpetrated by a government anxious to be seen as responsive and responsible (which, in our opinion, they were).