Chiapas state in Mexico is home to living Mayan culture and the remains of Mayan cities past including the Tenem Puente and Chinkultic archaeological sites. 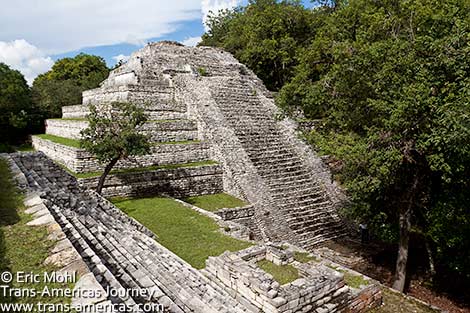 The remains of the Mayan city of Tenem Puente, possibly inhabited as late as 1200-1500 AD, are now grassy and inviting. Built along a series of slopes and hills, the site is more multi-level than most Mayan cities. It also boasts some wicked-long walls and sets of stairs. 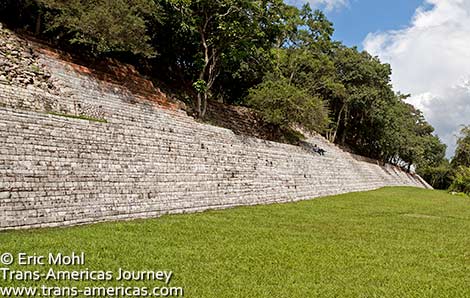 This wall of stairs at Tenem Puente archaeological site was more than 200 yards long.

Note: We’d read that the Tenem Puente site was free but we were asked to pay 31 pesos (US$1.65) each. We paid, but when we got a less-than-official receipt (always ask for a receipt or ticket stub) we smelled a rat. Turns out, the site is now legitimately 31 pesos per person as confirmed by INAH, the Mexican branch of government that oversees archaeological sites. 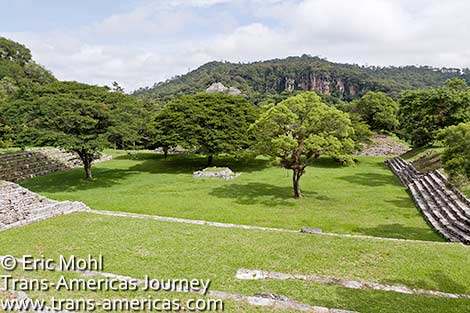 Chinkultic Mayan ruins. We couldn’t reach half the site located on the hillside in the distance due to a flood.

The Chinkultic archaeological site includes remains of a Mayan city that dates back to 600 AD. Unlike most Mayan cities, large sections of Chinkultic were built on a hillside and ridgetop, not on an artificially leveled plateau. We hear the views from up there are fabulous, stretching all the way to the brilliantly colored lakes of Lagos de Montebello.

During our visit to Chinkultic, however, all we could do was look up at bits of the ancient city poking tantalizingly through the wooded hillside as we stood stranded on the wrong side of a flood. Rain had turned the normally docile creek that runs through the site into a wide, deep river that swept away the foot bridge.

The good news? The site’s entry fee was waved for as long as the flood persisted. We contented ourselves with the well-preserved stele that are on display at Chinkultic–some even have some color left on them. The stele are located out near the (oddly asymmetrical) ball court. Don’t miss them. 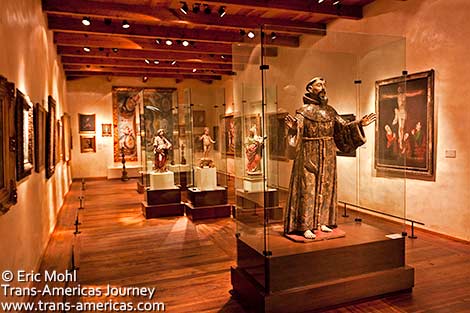 The small but powerful museum inside the small chapel at the Santa Maria Parador Museo is full of religious art.

Our base as we explored this so-called Frontier area (because it’s on the border with Guatemala) was the Santa Maria Parador Museo hotel, the sister property to the Parado San Juan de Dios where we stayed for a few nights in the wonderful city of San Cristóbal. Like its sibling, the Santa Maria has been created by art and antiques dealer Mario Uvence as a completely unique art-lovers’ paradise. 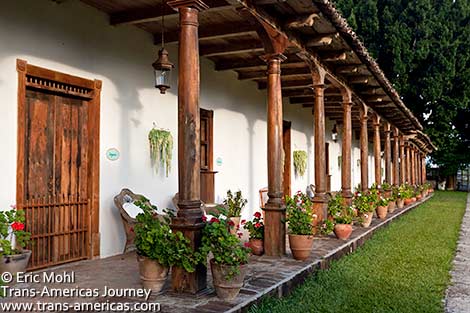 The airy patio in front of the eight antique-filled rooms at Santa Maria Parador Museo.

The small simple chapel which served this 19th-century hacienda has been turned into a thoroughly modern museum housing a fascinating collection of religious sculptures and paintings.

The boutique hotel’s eight rooms (some of them on the tiny side), are all located in a long tile-roofed building that was a storeroom and each room is full of more art and opulent antique furniture. All open up onto a breezy communal patio that runs the length of the building. A fantastic restaurant and delicious coffee made from beans grown on-site plus a gorgeous little pool and a huge tented room decorated like a kasbah round out this unexpected gem.