The Tierradentro National Archaeological Park is home to what is believed to be the greatest number of cave tombs in Latin America. There are dozens of them, some dating back 1,400 years. It’s a highlight for many travelers to Colombia and the place is unlike any other archaeological site in the country. However, we were a little distracted by the firefights between Colombian soldiers and FARC rebels in the surrounding foothills when we were there… 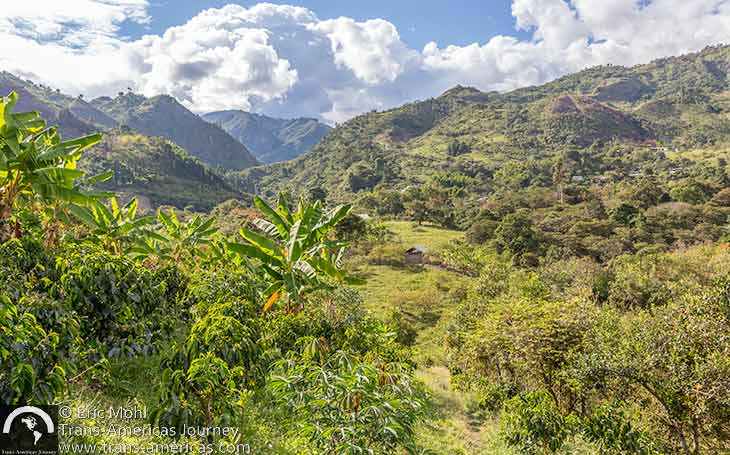 The foothills around the Tierradentro National Archaeological Park in Southern Colombia are usually peaceful.

During the more than 18 months we spent traveling in Colombia we heard many personal stories about the FARC and the ongoing violence associated with the rebel group which has been operating in the country for decades. These stories brought the grim reality of living in a country that’s been essentially fighting a civil war with guerrillas into stark relief.

But nothing prepared us for our one and only firsthand encounter with the FARC as we arrived in San Andres de Pisimbala, the village in southern Colombia which is the gateway town to the nearby Tierradentro site. 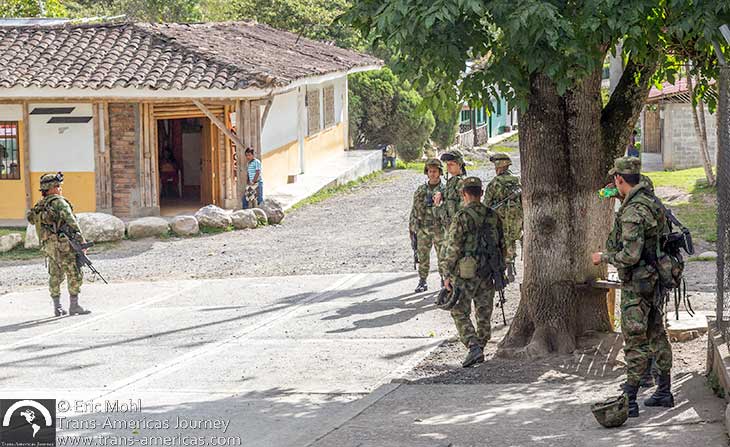 NOT what you want to see when you rock into town: Colombian soldiers in the streets of San Andres de Pisimbala after FARC guerrillas booby-trapped the local school with land mines.

And when we say “first hand” we mean the town’s school, just one block from our guesthouse, was booby-trapped with land mines, Colombian soldiers were in the streets, and FARC rebels were in the hills. When those opposing groups began shooting at and shelling each other, we hid in the kitchen of our guesthouse (La Portada Hospedaje) numbly trying to process the tense, powerless reality of being caught in the crossfire.

The two-day saga is chronicled in our Breakfast with the FARC story for New Worlder. 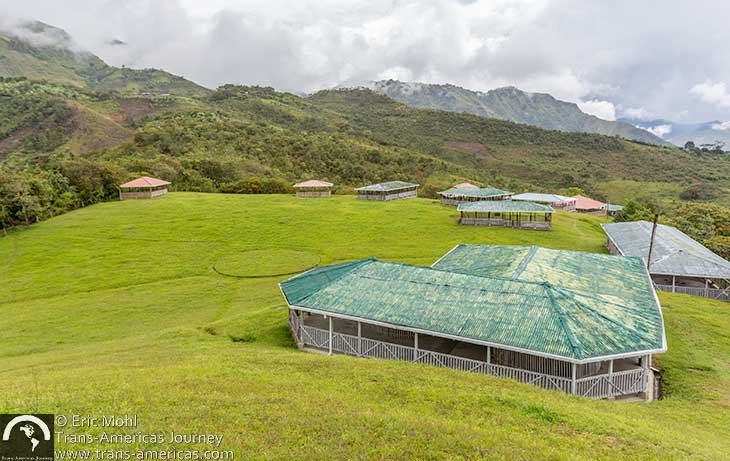 Structures protecting entrances to the elaborately painted and carved underground tombs at the Tierradentro Archaeological Park.

Once the FARC and the Colombian soldiers had moved on, things returned to normal remarkably quickly in sleepy San Andres de Pisimbala. The Tierradentro Archaeological Park (20,000 COP or about US$7 per person for a ticket that’s good for two days) also opened up again so we finally had a chance to explore what we’d come to see in the first place.

The decorated interior of one of the man-made underground tombs at Tierradentro.

As we said, Tierradentro is unlike any other archaeological site in Colombia because it’s home to a very high concentration of elaborate cave tombs – more than 160 of them. The area has been excavated since the 1930s and experts say some of the tombs date back up to 1,400 years. 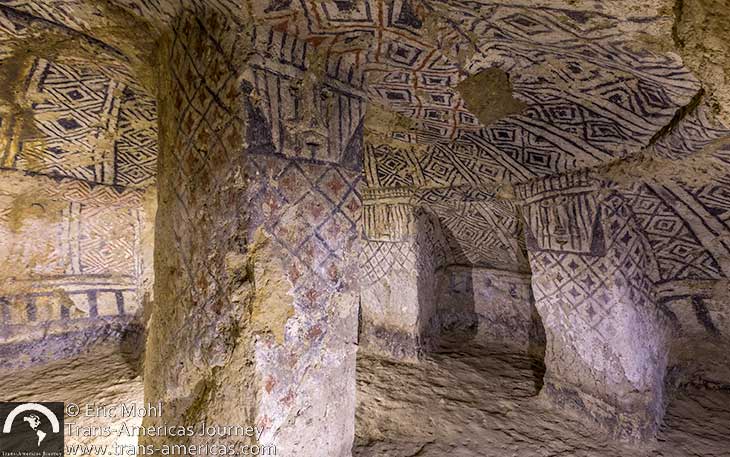 Geometric shapes in red or black pigment are the main motifs inside the tombs at Tierradentro.

The tombs exist inside man-made “caves” called hypogeas which were dug into the ground. These are accessed via hand-cut steps that form steep, curved staircases that take you from ground level directly down into the dugout space – like entering a crude cellar. 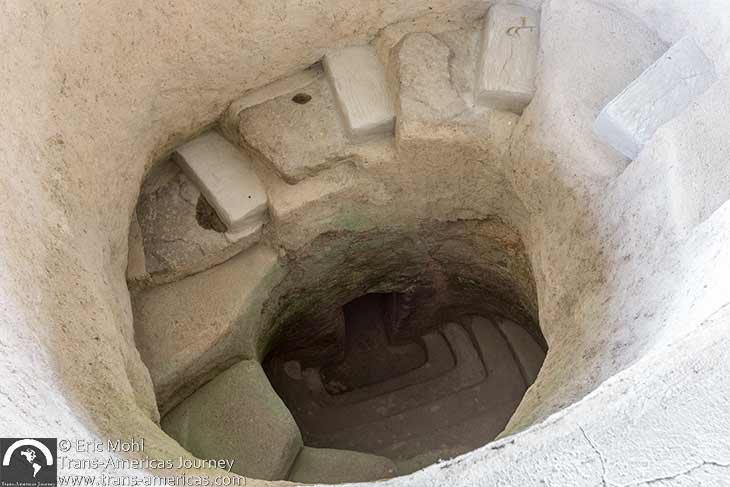 Hand-cut staircases like this descend steeply into each tomb.

Once inside, the spaces are impressively large. Big enough to stand up in and walk around. There is lighting inside, but bring a flashlight to be sure you can really see the tomb decorations. 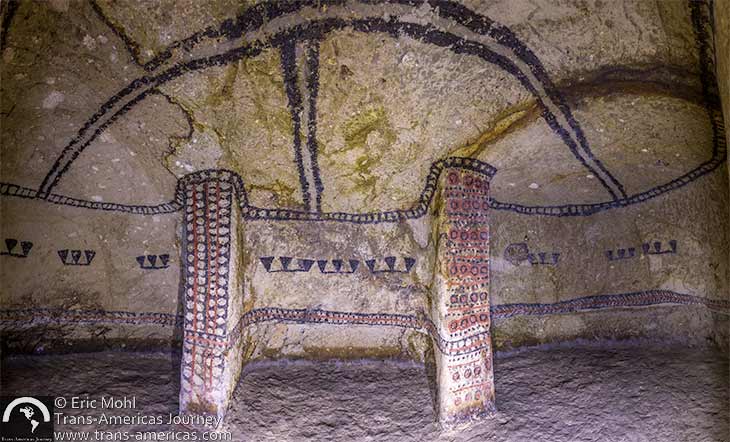 Almost every interior surface is painted using red or black pigment to create geometric shapes, animals and human faces. Niches are also dug into the walls of the tombs along with carvings. 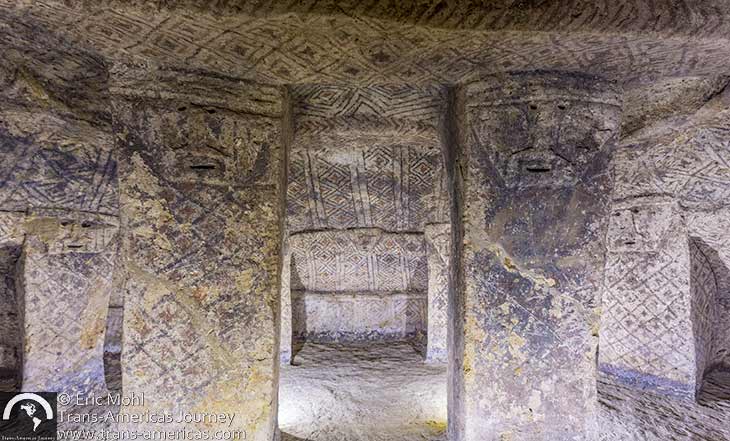 Human figures and carved niches inside a tomb at Tierradentro.

There are also two small museums on the site, but it’s the tombs, designated a UNESCO World Heritage site in 1995, that are the highlight. They’re spread out over a fairly large distance on sloping hillsides, so be prepared to do some walking. And, as we said, bring a flashlight. If you have a tripod, bring that too to assist with your shots inside the tombs.

In addition to the underground tombs, the El Tablón area of the site also has carved volcanic stone statues which you can hike to when FARC rebels and Colombian soldiers aren’t trying to kill each other in the hills, which we hope has stopped since both sides signed a peace treaty in 2017.