City Travel Guide: 11 Things To Do in Cartagena, Colombia

The main thing to do in Cartagena is to simply gawk at the city’s beauty. We’ve visited plenty of lovingly restored colonial towns in Latin America, but Cartagena is even more beautiful than stunners like Antigua, Guatemala or the Casco Viejo neighborhood of Panama City. Cartagena not only expects to be stared at, it deserves it and it won’t take long for you to see why the city’s historic center is a UNESCO World Heritage site. After more than a month in the city, here are 11 things to do in Cartagena besides wander the colonial streets (and one thing to avoid). 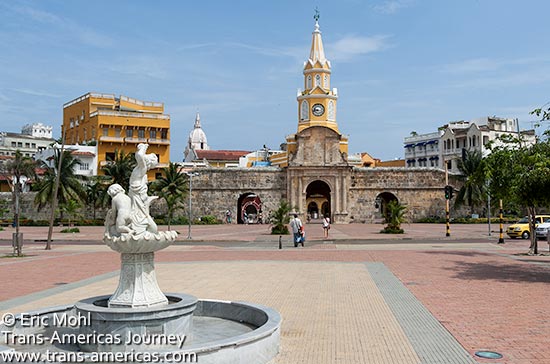 El Torre del Reloj, or the Clock Tower, marks a major entrance into the walled city of Cartagena, Colombia.

11 things to do in Cartagena, Colombia

Colombia’s Nobel prize-winning writer Gabriel García Márquez was inspired by Cartagena and lived in the city off and on until his death in 2014. Many of the author’s most famous works, including Love in the Time of Cholera, The General in His Labyrinth, and Love and Other Demons, were set in the city. Those who want to get a bit more Gabo, as the author was called, can book the self-guided Gabo’s Cartagena audio walking tour (US$17 including an audio guide in five languages, including English, and a printed route map). True García Márquez fans will want to take part in the three-hour guided Route of Garcia Marquez tour which takes in 37 sites in historic central Cartagena, all of which are directly linked to scenes and characters from the author’s work and life (US$145 for one person, US$20 per person after that; participants must have read the books mentioned above). 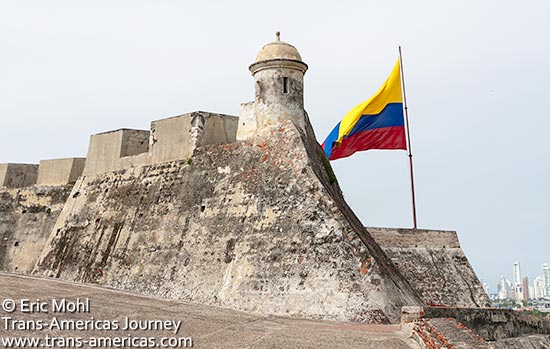 The Castillo de San Felipe de Barajas (San Felipe de Barajas Fort), in the nearby Getsemani neighborhood, is the most robust fort the Spanish ever built and it still looks impenetrable. Construction began in 1536 and it was expanded in the mid-1600s. It’s been impressively restored and its stony bulk still dominates San Lázaro hill. Bring a flashlight since visitors are allowed into some of the interior corridors and tunnels which can be dark. There’s little shade so try to arrive when the fort opens at 8 am to beat the heat and avoid weekends if you can. That’s when Colombians can enter the fort for free and the place gets packed. 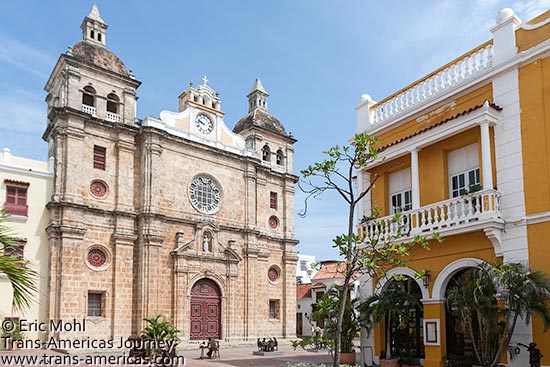 Cartagena’s Museum of Modern Art, on Plaza de San Pedro Claver, is small and we honestly weren’t expecting much. However, the two-story facility turned out to be home to a nice collection mostly by Colombian artists including Enrique Grau. 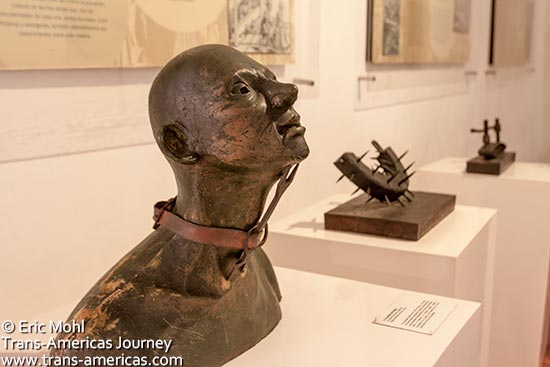 Just a few of the bona fide torture devices used by Spanish inquisitors, on display in the Palace of the Inquisition Museum in Cartagena.

If you’re into torture devices, visit the Palacio de la Inquisición (Palace of the Inquisition) just off Plaza Bolívar is where you can see art, artifacts, and bona fide torture devices used during the Spanish Inquisition. The building also has a small window from which inquisitors would shout out death sentences for those who didn’t pass their religious scrutiny. 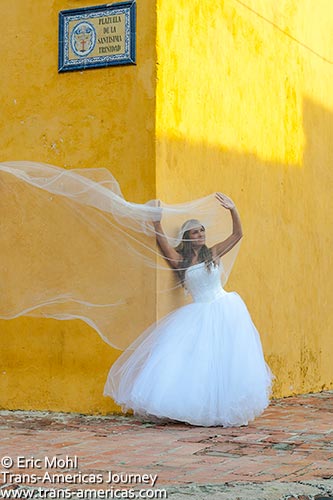 The church in Plaza Trinidad in the Getsemani neighborhood of Cartagena is a popular spot for wedding and for wedding photography.

We happily spent four days wandering the streets of Getsemani on our own, soaking in the bohemian vibe and the street art. However, there are a number of innovative and illuminating tours of the neighborhood available like the Explore Getsemani Tour (US$35 per person including bilingual guides) which includes lots of neighborhood history, drop-ins with locals, visits to shops and art studios, cocktails on Plaza Trinidad, and a donation to a local charity built into your tour fee.

The beaches around Cartagena on mainland Colombia are nothing to write home about but there are plenty of options for day trips to nearby islands where the beaches are spectacular. Colombia Direct offers day trips in speedboats or yachts with catered lunches (from sandwiches to more gourmet fare) that get you to the protected Rosario Islands archipelago, about 60 miles (100 km) off the mainland, and back in style. Island picnics start at about US$35 per person plus the cost of the fully staffed and equipped boat of your choice.

Cartagena on a budget 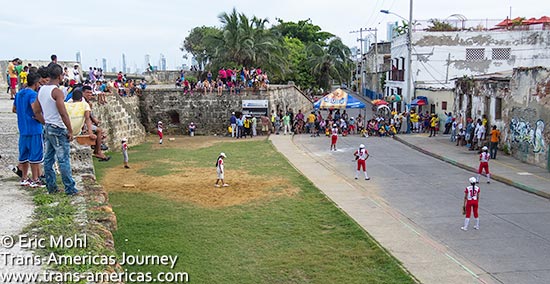 Sunday softball in the streets of the Getsemani neighborhood of Cartagena.

Though soccer is the undisputed sporting king in Latin America, Colombians on the Caribbean coast also love baseball and every Sunday Avenida El Pedregal in the Getsemani neighborhood is closed to traffic and transformed into a makeshift diamond for women’s softball teams. Find a perch on the centuries-old Spanish-built wall that runs along this street and you’ve got the best seat in the stadium. 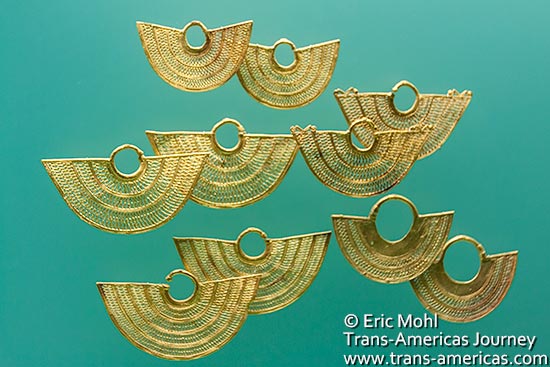 Hundreds of intricate gold artifacts are on display in the (free) Zenú Gold Museum in Cartagena.

The Zenú Gold Museum on Plaza Bolivar is home to a collection of more than 500 pieces of exquisitely crafted gold jewelry and iconography made by the Zenú people who flourished in Colombia from the 16th century. Amazingly, the museum is free. 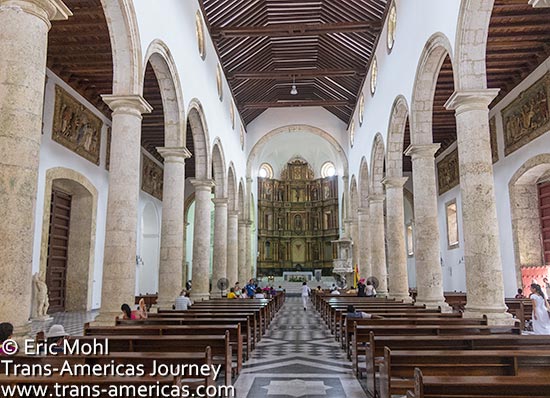 Inside the Metropolitan Cathedral Basilica of Saint Catherine of Alexandria in Cartagena.

Normally visitors have to pay a fee if they want to go inside the massive Metropolitan Cathedral Basilica of Saint Catherine of Alexandria. However, during noon time mass the doors are open and all are welcomed in for free. Inside, there’s a gilded altar and massive carved doors and it’s certainly worth a visit. 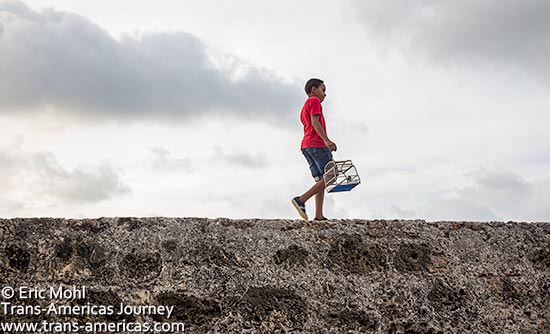 To protect the city from pirates and other attackers, the Spanish built massive walls around Cartagena. Developed and expanded over 200 years, the city was eventually completely enclosed by more than 6 miles (11 km) of walls and fortresses. Much of these walls still exist, particularly along the side of the city that fronts the Caribbean. There are access points that let you climb to the top of the walls and walk along their wide expanse, which is particularly pleasant near sunset when the temperature starts to cool and the sky is spectacular.

Though conditions for the horses that pull carriages through the historic center of Cartagena have improved in recent years following accusations of widespread neglect, there’s still little regulation. You’ll see more of the city on foot anyway and also have the freedom to duck into a chic shop or grab a cocktail or a paletta as you ramble.

Continue your Cartagena trip planning with our complete city travel guide to Cartagena, Colombia which covers, hotels, restaurants, bars, and the general beauty of this Caribbean city.