Epic Drives: The Trampoline of Death Road from Mocoa to Lago de la Cocha in Colombia

The Trampoline of Death road in Colombia is said to have taken hundreds of lives due to the dirt road’s dangerously narrow, winding, eroded, and often foggy conditions. Of course, we had to this epic drive (and film it). 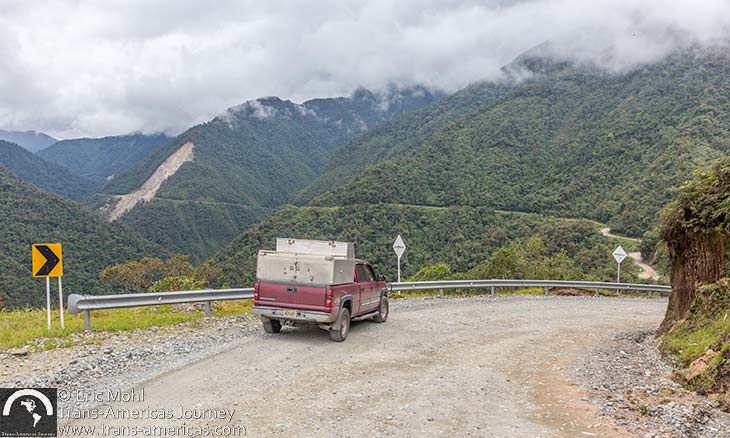 On Colombia’s Trampoline of Death road.

Driving the Trampoline of Death road in Colombia

The Trampoline of Death is also known as the Devil’s Trampoline (which sounds even grimmer in Spanish: Trampolín de Diablo), the Most Dangerous Road in Colombia, and Adios Mi Vida (Goodbye My Life). It was built in the 1930s to transport troops through mountain terrain in Southern Colombia and it remains a narrow dirt road (single lane in some places) with blind corners and hairpin turns often rendered even more perilous by descending fog and periodic washouts. 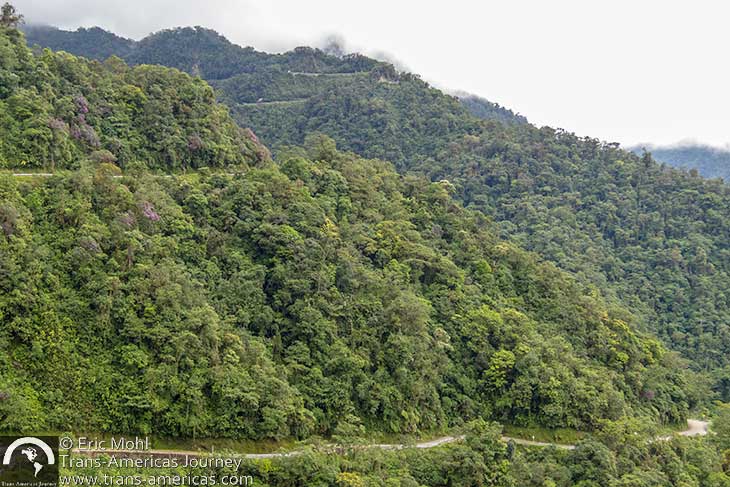 The Trampoline of Death cutting a swatch through the jungly terrain near Mocoa.

Then the road drops 2,000 feet (600 meters) into an inhabited valley where it becomes paved and is no longer The Trampoline of Death but just another mediocre Colombian road. Beyond the valley, the road climbs again to the route’s high point of nearly 10,700 feet (3,261 meters) before dropping down to Laguna de la Cocha at 9,200 feet (2,800 meters) and finally to the city of Pasto at 8,300 feet (2,529 meters).

We embarked on our Trampoline of Death drive from Mocoa at 9:30 am on a drizzly Saturday morning with the usual excitement from Eric and gnawing apprehension and crossed fingers from Karen. Water bottles were filled. Engine fluids and tire pressure were checked. We even charged up our walkie-talkies thinking Karen might have to scout ahead and direct Eric over particularly perilous patches. 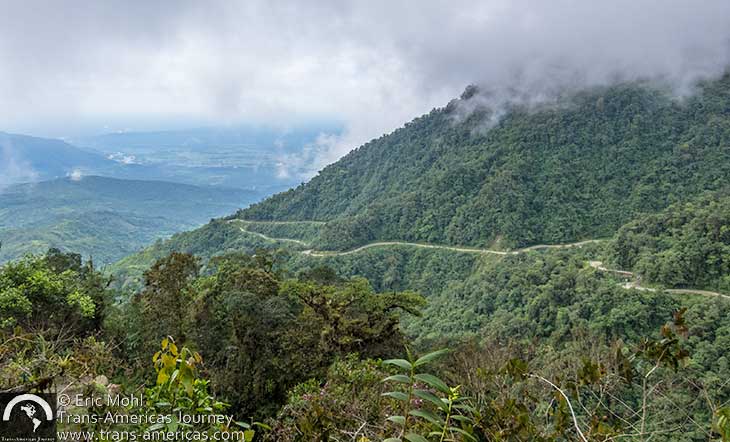 It looked innocent enough from a distance…

We were prepared for steep grades, blind corners, and narrow stretches where two vehicles can’t possibly pass. Pot holes? No problem. Rock slides? Been there. Precipitous drops? Our middle name.

You call this a death road?

What we weren’t prepared for was a recently graded surface, helpful safety signs alerting drivers to particularly narrow spots, and what appeared to be newly installed guard rails along many of the sketchy sections. Guard rails? What kind of a death road has guard rails? There were even a few pleasant turnouts… 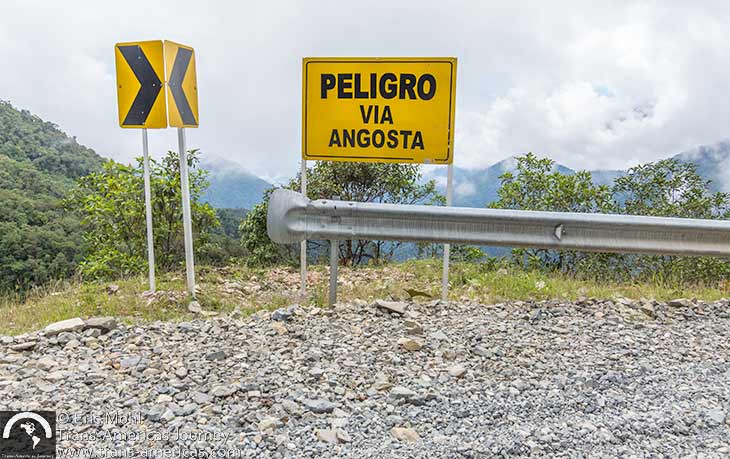 Still, we drove slowly and carefully. During our four-hour drive on The Trampoline of Death we saw about 40 other vehicles including motorcycles, private cars, taxis, minivans, and medium-sized cargo trucks (no 18 wheelers). Some areas were washed out by the many waterfalls which tumble onto the road and yellow tape, helpfully printed with peligro no pase (danger don’t pass), was up in areas where road erosion was particularly bad. There were also numerous roadside shrines marking spots where loved ones lost their lives.

Just a few of the roadside memorials to those who lost their lives on Colombia’s Trampoline of Death road.

There were many blind corners and long one lane stretches hugging the cliffs. More than once the road was so narrow that we sat for a few minutes and waited for an oncoming truck to chug past us before continuing. This concept of “discretion is the better part of valor” is very anti-Latin. Most drivers just continue moving until they’re face to face with a truck or bus at which point a game of chicken ensues until one driver backs up to a wider spot in the road so the vehicles can pass each other.

After four hours we reached the end of The Trampoline of Death without incident. No trampolines, no death, and we never even used our walkie-talkies.

Check out our Brinno dash cam time-lapse video of our Trampoline of Death drive, below, to see this infamous road (and some close calls) for yourself.

Even the guys at Top Gear took their chances on Colombia’s Trampoline of Death road.

From the death road to a hotel inspired by The Shining

Six hours after leaving Mocoa we arrived at Lago de la Cocha. About an hour from the city of Pasto, this is a glacier fed reservoir which is the second largest body of water in Colombia behind Lake Tota. 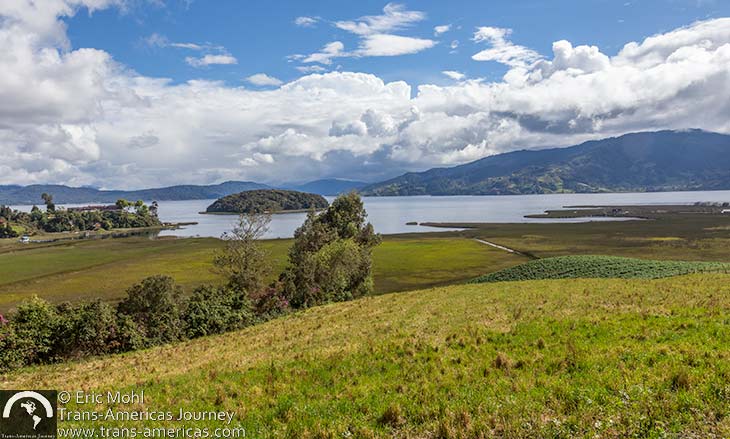 We splurged on a room at the Hotel Sindamanoy. On the outside its got a Swiss-ish chalet look and feel with a bit of old-school US National Park Lodge style tossed in, all shaken up with a dash of inspiration from The Shining. Inside it’s like a time machine back to the 1970s:  Carpeting, rotary phones, gingham curtains, creepy red towels. We half expected a Thousand Fingers massaging bed with a slot for quarters. No luck.

However, the hotel is right on the lake and has great views. Unfortunately, the weather was too wet and cold to make the boat transfer to La Corota Island in the lake which is the smallest national park in Colombia. But we did venture out to a nearby restaurant for a trout dinner, a local specialty.