If you ask us, the Caribbean coast of Costa Rica has the Pacific coast beat when it comes to the most beautiful beaches, most authentic beach town (Puerto Viejo), and the greatest number of hotels and restaurants offering value for money on any travel budget. So why do so few visitors travel to Costa Rica’s Caribbean coast? Beats us. 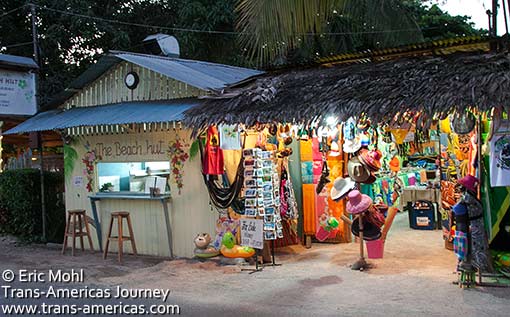 Puerto Viejo is the only real town on the southern Caribbean coast of Costa Rica and it’s a charmer with a mix of surfers, international travelers in the know, and local families on holiday.

Don’t get us wrong. We really enjoyed Pacific coast locations like Santa Elena, Tamarindo, Uvita, Ojochal, the Nicoya Peninsula, etc. But we left our hearts on this 11 mile (17 km) stretch on the Caribbean side.

It’s a lovely, sometimes-coastal drive from Puerto Limon (see our Travel Tip about this dodgy port town below), past Cahuita, and into the beach town of Puerto Viejo del Talamanca and Costa Rica’s Caribbean coast.

Most people simply call it Puerto Viejo. It’s got an infectiously slow pace, a festive but not fraternity party vibe, and a surprising selection of services (from bakeries to chic boutiques) yet it won’t trip your tourist trap radar. There’s also a lovely barrel called Salsa Brava which breaks a few hundred yards from Puerto Viejo’s shoreline, keeping surfers (and surfer watchers) satisfied. 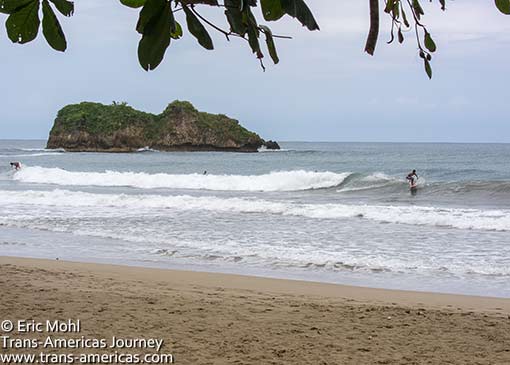 There are three main beaches stretched out south from Puerto Viejo. All of them are beautiful with wide, walkable swaths of sand, lovely blue Caribbean water, and mostly-swimmable surf. Yet each also manages to have its own personality.

Best beach for: walking The nearest beach to Puerto Viejo is Playa Cocles, a nearly salmon-colored stretch of sand backed by pure jungle that runs for 2.5 miles (4 km) until it reaches a rocky outcrop called Punta Cocles.

Best beach for: tide pooling and swimming On the other side of Punta Cocles, still traveling south, lies Playa Chiquita which runs for another 2.5 miles (4 km) until it hits another rocky outcrop, this one is called Punta Uva. 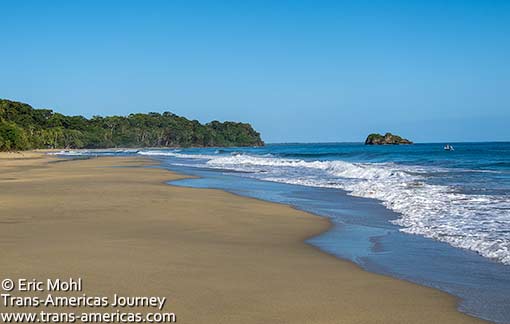 Best beach for: chilling with a cold beer Furthest away from Puerto Viejo is Playa Manzanillo and the tiny town of Manzanillo where you can get a cheap meal, a scoop of ice cream, a camping spot, and cold beer but not much more. But what else do you really need with the chillest stretch of beach we’ve seen in Central America in front of you?

Warning: you will be tempted to fling your towel out in the shade of one of the many almond trees on these beaches. Don’t do it. A red caterpillar lives in the almond trees around here and if you touch it (or vice versa) it inflicts an extremely painful wound. There’s a sign posted in Puerto Veijo that advises in the case of an encounter with these “red worms” you can either spend US$20 and go to the doctor, though there is no treatment, or spend US$20 on rum and deal with the pain that way. Or, just don’t sit under the almond trees…

In addition to the usual suspects (rowdy hostels, mediocre mid-priced hotels, and vacation homes for rent) there are some real lodging finds with unexpected character along the southern Caribbean coast. Just don’t expect a view of the ocean. Most accommodations are close to but not right on the beach to keep development at bay and nature at the forefront. 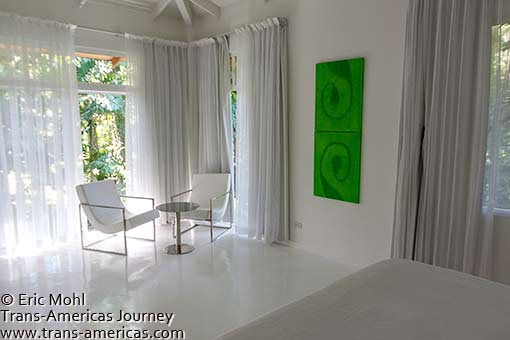 For the stylish and spendy Le Cameleon Boutique Hotel, near Playa Cocles, is a full-service, starkly white and starkly hip hotel. If there wasn’t sand between your toes you’d think you were in a chic, urban hotel. Here’s our full review of Le Cameleon. 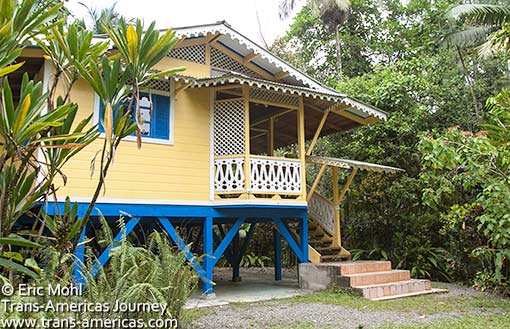 For families and anyone looking for a real Caribbean vibe There’s no shortage of lodging options here that offer Caribbean colors and decor but there’s something different about Hotel Aguas Claras bungalows. Maybe it’s the ornate wood work and circular architecture on stilts. Maybe it’s the neighborhood feeling with five bungalows (each in a different festive color combo sleeping two to four guests) nestled in the lushly-landscaped grounds. Maybe it’s the full kitchens and inviting porches from which to watch howler monkeys and impossibly-colored birds travel through. All we know is we didn’t want to leave our bungalow even though awesome Playa Cocles was only a few steps away. 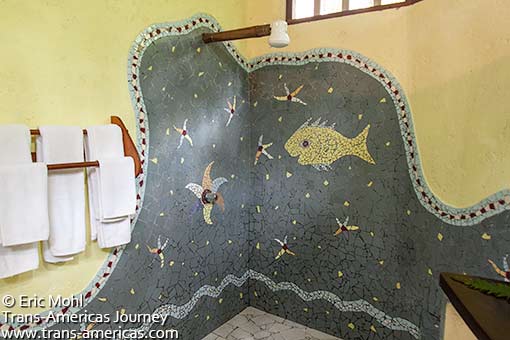 For nature (and nurture) lovers The French owners, who opened Shawandha Lodge more than 15 years ago, call the 14 thatch roof bungalows “neo-primitive.” Each has a large porch, good screens, comfortable beds and artistically tiled bathrooms. Though Playa Chiquita is just a short stroll away you may do your cooling off in the Shawandha pool which is kept clean with a saltwater process that skips the chemicals. You will certainly do some wildlife watching on the lodge’s five acres (two hectares). We routinely saw toucans and sloths. And don’t miss their 200 foot (60 meter) tall ceiba tree.

One of many keel-billed toucans we saw on the grounds of Shawandha Lodge on the southern Caribbean coast of Costa Rica. 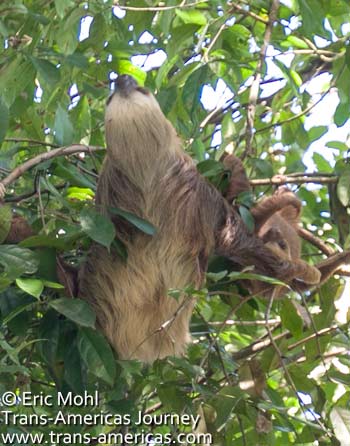 A sloth with her baby on the grounds of Le Cameleon Boutique Hotel on the southern Caribbean coast of Costa Rica. 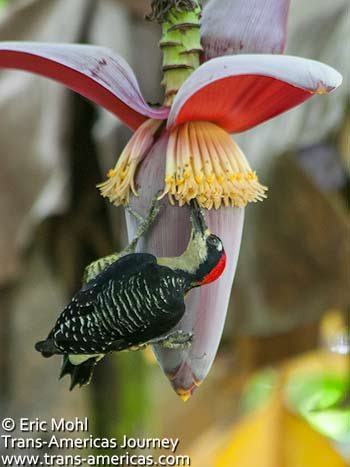 A woodpecker snacks on a banana flower on the grounds of Shawandha Lodge on the southern Caribbean coast of Costa Rica.

Puerto Viejo has more than its share of mid-to-upper-range eateries. A harder find was somewhere to get reliably good food at a decent price. The cheapest, tastiest option we found was Mare Nuestro where you can get a big grilled fish with sides for around US$6.

If anything is going to tear you away from the beaches and your new commitment to doing nothing it’s poisonous frogs and rescued baby sloths. Thankfully, there are places to see both (and more).

Finca La Isla’s Botanical Garden is one of the best places to get an eyeful of various species of zanily patterned, brightly colored, totally gorgeous poison dart frogs (US$5 per person, Friday, Saturday, and Sunday 10-4, wear walking shoes and bug spray). The tiny frogs love the plant nursery and grounds here and a bit of patience and persistence paid off for us with sightings of red-eyed tree frogs, green and black frogs, and strawberry frogs though the snazzy-sounding transparent glass frogs on the property eluded us. 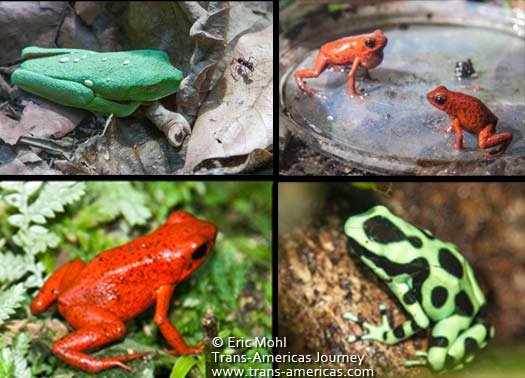 From top left to right: Red-eyed tree frog, a pair of strawberry frogs, a black and green poison dart frog and a lone strawberry frog all spotted at Finca La Isla’s Botanical Garden on the southern Caribbean coast of Costa Rica.

During a stroll through the Finca La Isla’s permaculture farm, we also saw a baby boa coiled up inside a huge bromeliad and our self-guided tour was capped off with a tasting of some of the fruits grown on the property and a sampling of the chocolate they make from cacao seeds grown there.

The Jaguar Rescue Center (US$15 per person, guided tours only, closed Sunday, reservations highly recommended) near Playa Chiquita is a haven for far more than just jaguars. During the course of a 2-hour tour we saw a bad-tempered margay named Diablito (little devil in Spanish), lots of pretty but poisonous eyelash vipers, a boa with a mouse lunch in its cage, colorful jungle birds, imposing birds of prey, and many more rescued wild animals which are being rehabilitated and prepared for their return to the wild. 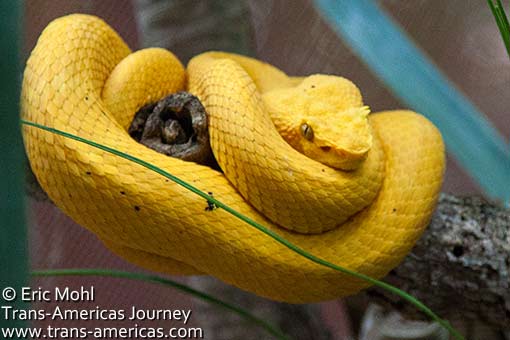 A yellow eyelash viper, a venomous pit viper named for the specialized scales above its eyes.

We also got into an enclosure with howler monkeys which clamored all over us like we were mobile trees. As part of their rehab the howlers are taken into the jungle by volunteers so they can interact with wild monkeys for four hours every day. The monkeys return to the enclosure by choice, most eventually remaining in the jungle when they feel they’re ready. 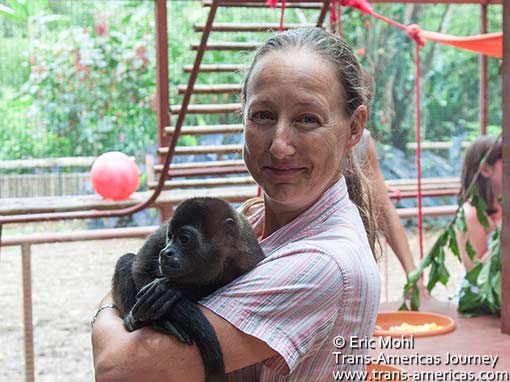 Karen channeling her inner Jane Goodall in the howler monkey enclosure at the Jaguar Rescue Center on the southern Caribbean coast of Costa Rica.

A two-toed sloth that was deemed ready for release was still hanging around the center, spending half its time in the wild and half back at “home.” It’s a process. Speaking of sloths, a highlight of the Jaguar Rescue Center is its sloth nursery which was full of baby sloths that had been orphaned when their mothers were killed by predators or, increasingly, by electrical wires. Some had been abandoned after falling out of a tree. There really is very little in this world that’s cuter than a baby sloth. 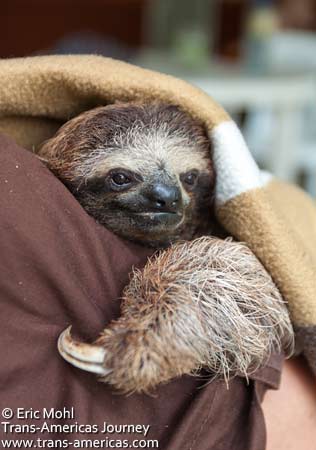 A baby sloth at the Jaguar Rescue Center in Costa Rica.

You’ll have to pass through Puerto Limon on your way to the Caribbean coast. For God’s sake don’t spend a night there. Like so many port towns, Puerto Limon is a hole. However, there is one fascinating historical fact you should know: Puerto Limon was the location of the headquarters of Marcus Garvey‘s ill-fated Black Star Line.

Garvey, a Jamaican, founded the Universal Negro Improvement Association of African Communities League and spearheaded a movement to repatriate African Americans back to Africa where, he believed, they would bring about an economic renaissance on the continent. His Black Star Line shipping company, started in 1919, was formed to transport African Americans back to Africa but corruption, poor management, and FBI infiltration forced the company out of business in 1922. The brightly painted, two-story wooden building that was the Black Star headquarters still stands in downtown Puerto Limon and is the oldest building in town. 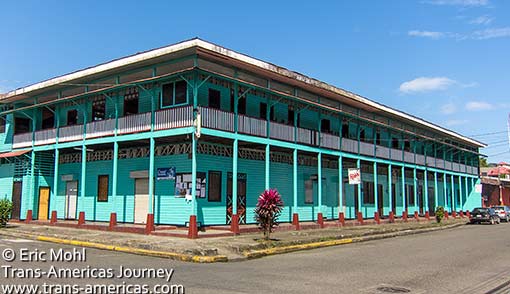 This building in Puerto Limon was once the headquarters for Marcus Garvey’s controversial Black Star Line. Swing by to see it, then get out of this dumpy port town. 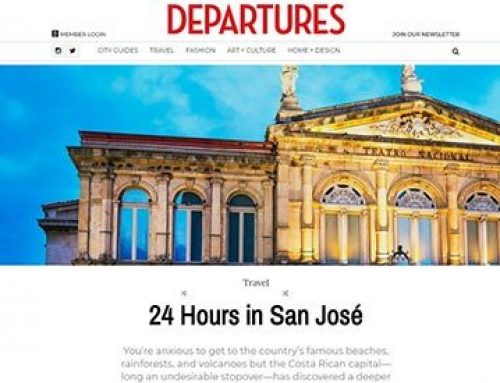 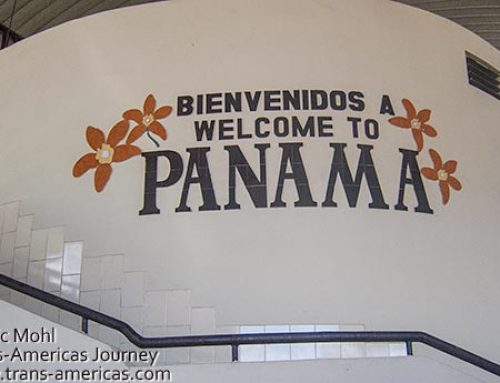 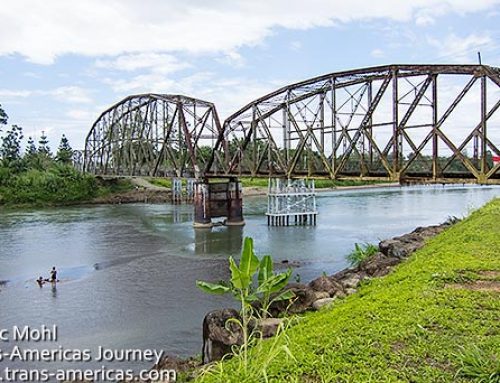 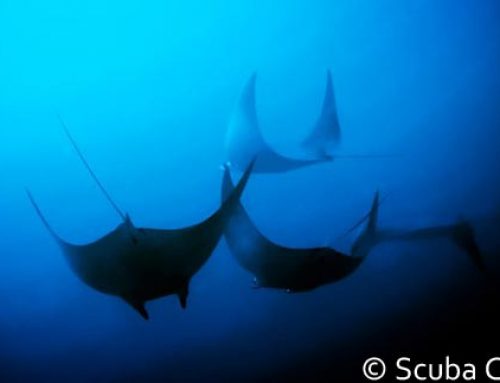 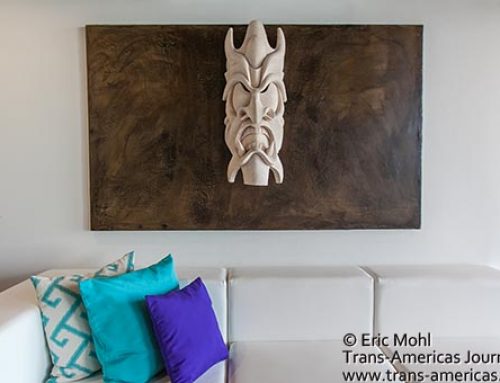 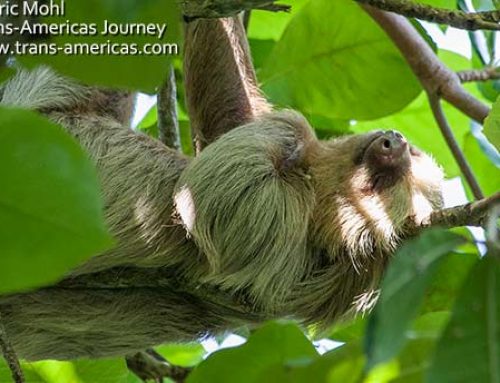 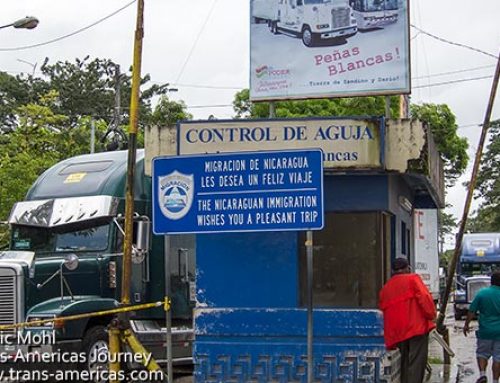 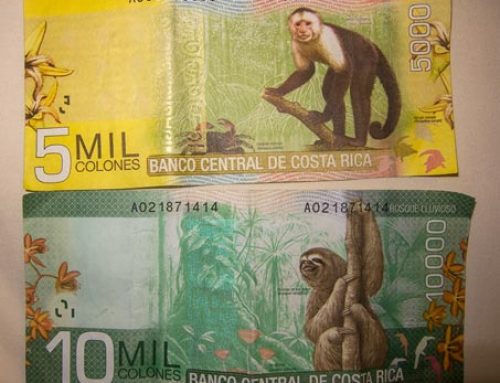 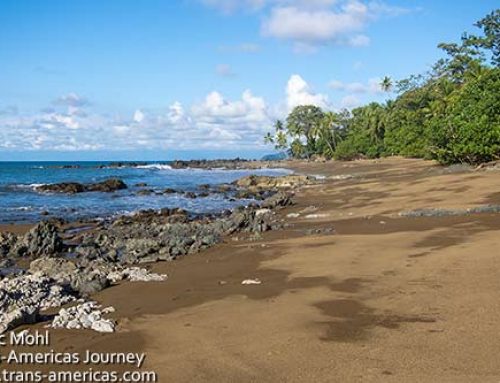 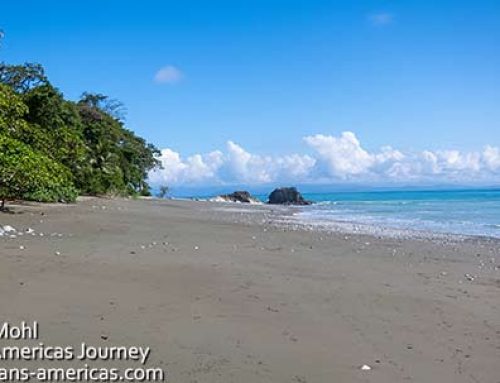