Behind the Lines – Archaeological Sites in Nazca, Peru

The overwhelming majority of people who travel to the town of Nazca, Peru come to see the famous Nazca Lines. We did too, exploring the Nazca Lines from the air and on the ground. But the area also has many archaeological sites that helped us understand a little bit about the Nazca people who were the ones behind those famous lines in the first place. 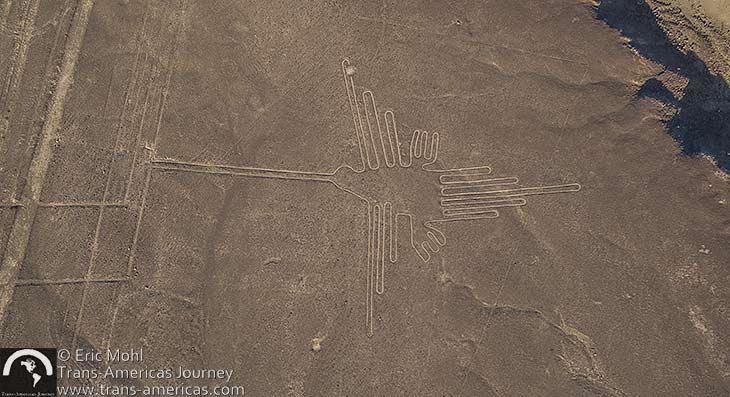 The Hummingbird, one of the most famous of the Nazca Lines.

The archaeological sites in Nazca, Peru

There are tour companies in Nazca (spelled Nasca in Peru) who will take you to the archaeological sites around the city, but we drove our truck (as usual). 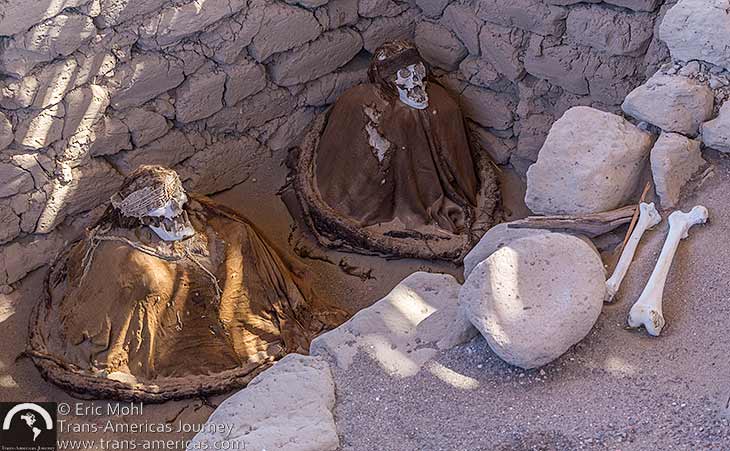 Incredibly well-preserved mummies like these can be seen in situ at the Chauchilla Cemetery archaeological site near Nazca.

The Chauchilla Cemetery site (8 PEN or about US$2.50), in the desert about 20 miles (30 km) from town down a sand road in good condition, is a remarkable spot. Here more than 30 extremely well-preserved mummies can be seen in situ, still resting in their graves which have been excavated and opened for viewing.

The mummies at the Cahuchilla Cemetery still have hair and skin and many have long ropes of hair or fiber draped over them as well. 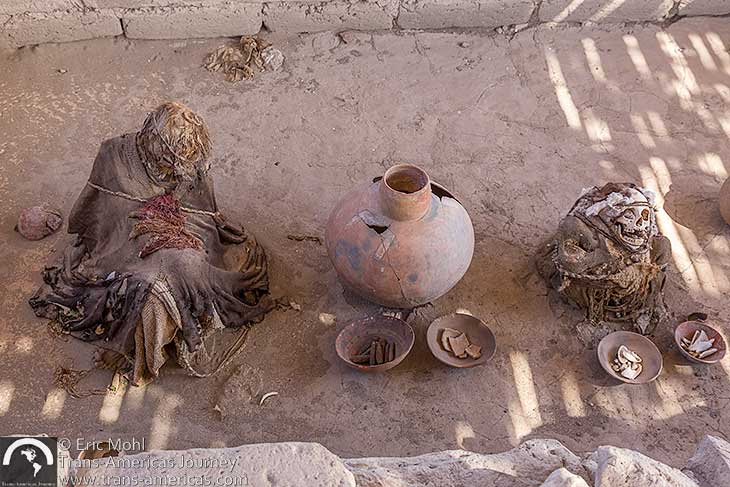 Mummies with pottery burial objects at the Chauchilla Cemetery archaeological site near Nazca.

A winding path connects the burial chambers where the skeletons of men, women, and children sit in a crouched position, their remains still covered in the textile shrouds they were buried in.

Researchers believe the cemetery was established in 200 AD and bodies were buried here over the next 600-700 years. Most of the bodies still have hair on their skulls and some are draped in what looks like long dreadlocks, but which may be twisted fibers. Many also still have skin on their bones thanks to the dry conditions and what may have been expert mummification work by the Nazca. 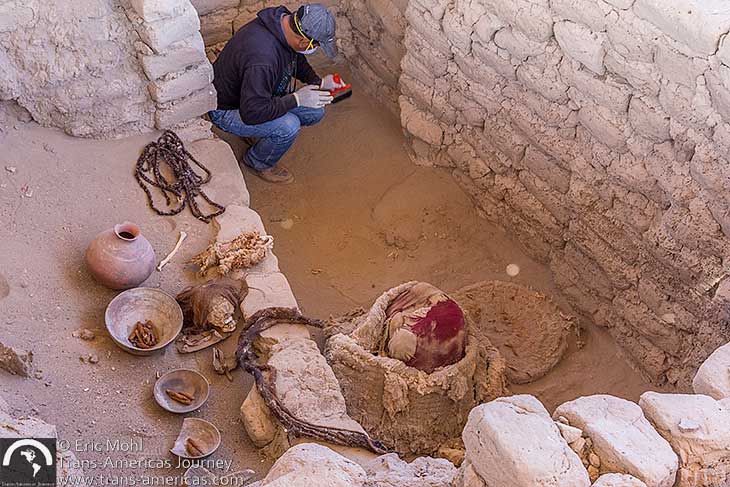 A worker restoring a tomb at the Chauchilla Cemetery.

There’s a small museum here as well which displays pottery and more mummies (Spanish only). 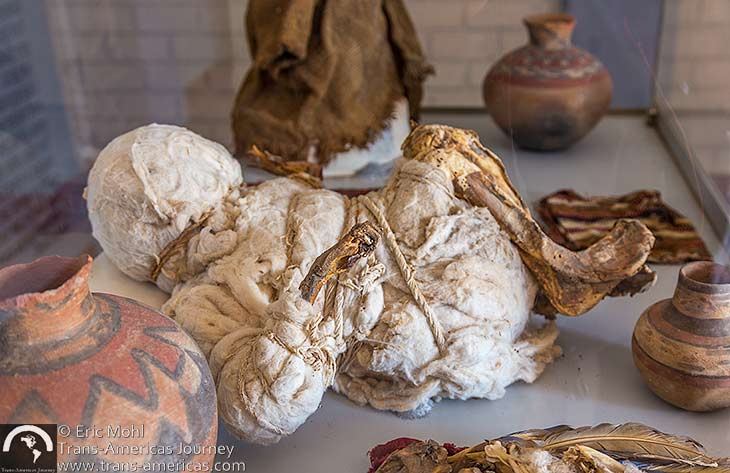 The mummified remains of a child in the small museum at the Chauchilla Cemetery archaeological site.

The Cahuachi archaeological site is about 20 miles (30 km) from Nazca. There are two routes to the site and both require nearly 10 miles of driving on a bad road. If you turn at the Mojoja Hotel sign you’ll be on a road that’s less washboarded, but much rockier than the other route. Pick your poison. Once at the site (free) you will likely be met by Pablo, the man who has been the caretaker of this remote site for more than 15 years. 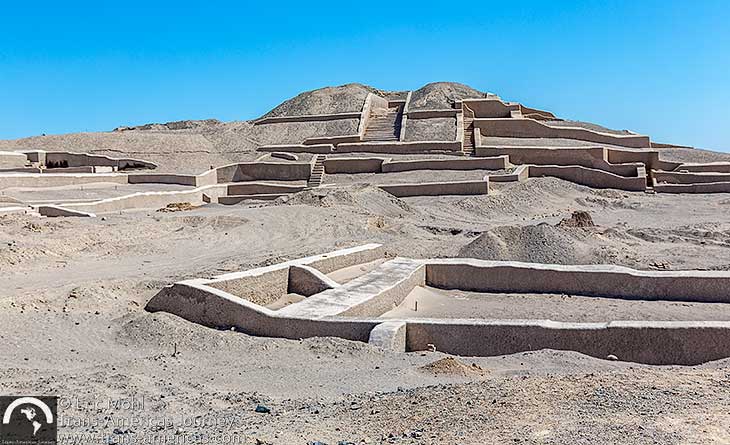 Excavated building foundation at the remote (but worth it) Cahuachi archaeological site.

For a small tip Pablo will explain the basics about the more than 30 structures here (in Spanish) which are spread over a vast area which was believed to have been a ceremonial site or a pilgrimage site that flourished until it was abandoned in 500 AD. Then you’re free to walk around the excavated foundations and some re-constructed areas. Pablo believes the Nazca Lines point to the Cahuachi site.

Not far from Cahuachi is the Estaquieria site (free). There’s not a lot to see here except the jagged remains of more than 200 wooden posts which remain stuck in the ground at evenly spaced intervals. Did the posts support a massive roof? Were they used to chart the movement of the sun or the stars? Or were they, as some speculate, used to begin the mummification process? 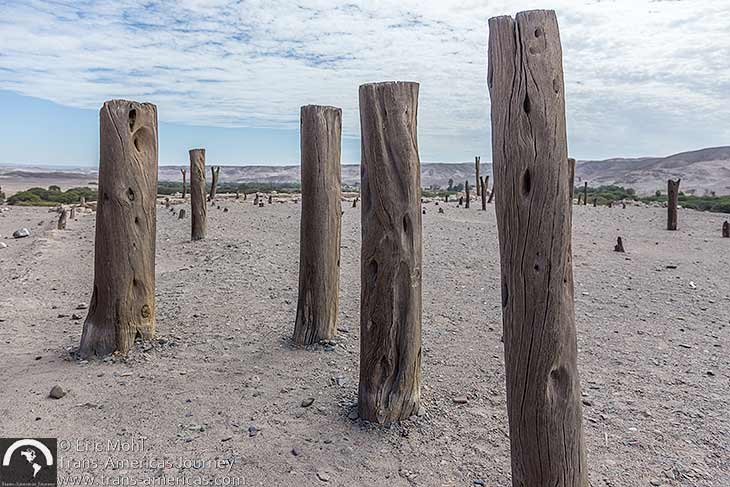 Hundreds of wooden poles remain planted in the earth at the eerie Estaquieria archaeological site. Their use remains a mystery. 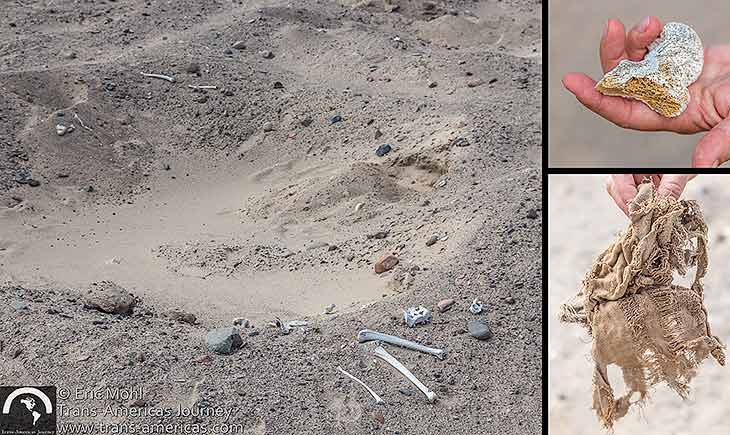 Looters around the Estaquieria archaeological site have dug up the earth, revealing bones, pottery shards, and even textiles.

Grave robbers have pillaged the area around the wooden pillars and bones, pottery shards, and pieces of fabric can be seen littering the ground. It’s an eerie site with a burned-out and deserted feeling. We saw no one else out there.

Just a few miles out of Nazca, the Aquaducto Cantalloc site (10 PEN or about US$3 which also gets you into the nearby Los Paredones and Las Agujas sites) is both beautiful and astounding. 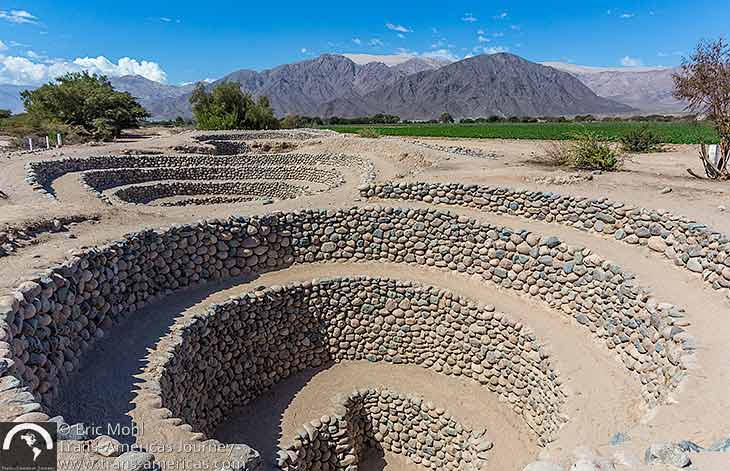 These spiral constructions combine form and function at the Aquaducto Cantalloc site near Nazca.

Here the Nazca people meticulously engineered and built 21 spiral holes which descend into the ground. They look like the art of Earthworks artists like Robert Smithson and Andy Goldsworthy, but they served a very serious function. 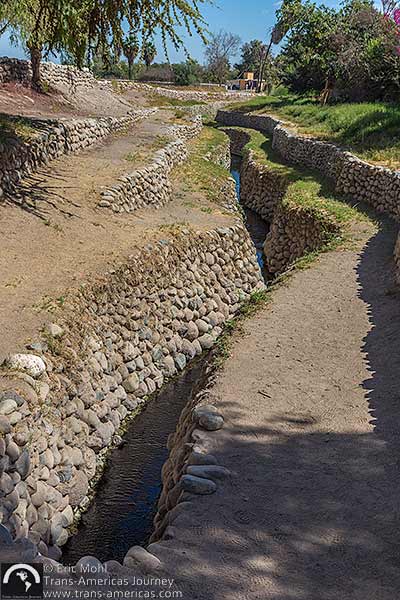 Part of the ancient aqueduct system at the Aquaducto Cantalloc site.

Researchers believe these stone and earth spirals were part of an elaborate irrigation system along with a network of flumes and aqueducts. The system is still being used to irrigate nearby fields. 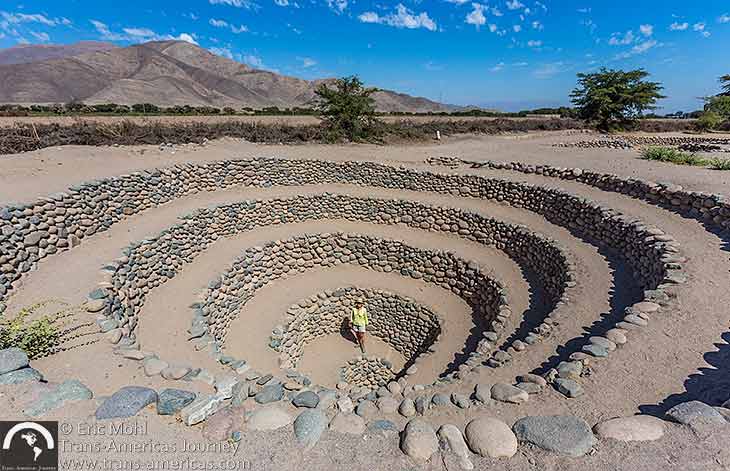 Karen at the bottom of one of the spirals at the Aquaducto Cantalloc site.

This aqueduct system is even more impressive from the air so check out our drone travel video footage, below.

One of the most accessible archaeological sites is Los Paredones (The Walls) which is near town on the side of the highway leading from Nazca to Puquio. Here a trail leads up and around a hill past some rebuilt structures and many low walls (hence the name).

Los Paredones was built by the Incas, not a Nazca site, in the 1400s and is thought to have been an administrative site between inland areas and the sea. The same 10 PEN (US$3) ticket also gets you into the nearby Aquaducto Cantalloc and Las Agujas sites. 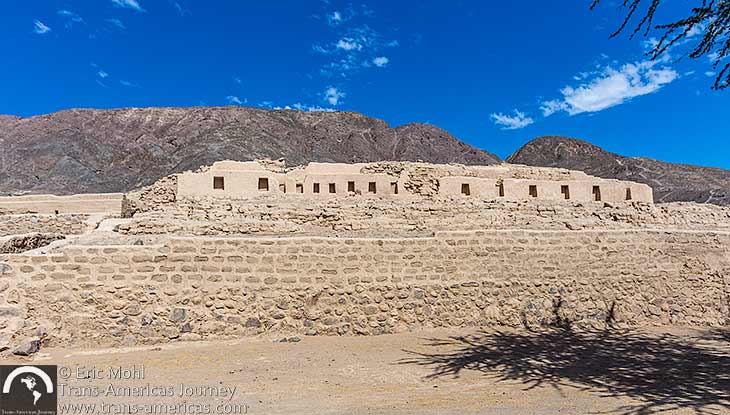 Structures at the Los Paredones site were built by the Incas.

Just a few blocks from the central plaza in Nazca you will find the well-curated Museo Didactoco Antonini (15 PEN or about US$4.60). Inside is a great collection of pottery and textiles created by the Nazca people, much of it from the Pueblo Viejo, Estaqueria, and Cahuachi sites. Descriptions are all in Spanish. Visit the back garden to see sections of old aqueduct and some peacocks. 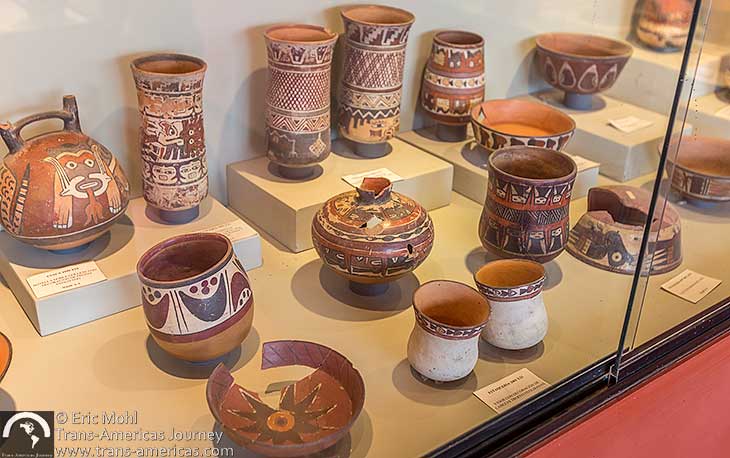 Part of the pottery collection at the Museo Didactoco Antonini in Nazca, Peru.