Anyone who’s read The Old Patagonian Express: By Train Through the Americas by Paul Theroux probably dreams of traveling by train through the Americas. But that’s considerably harder to do now than it was when Theroux set off on his adventure because so few train lines still exist. One exception is the Tren Crucero luxury train in Ecuador which takes passengers on a 4-day exploration of the culture, food, and natural beauty of the Andes and the Pacific coast between Quito and Guayaquil. 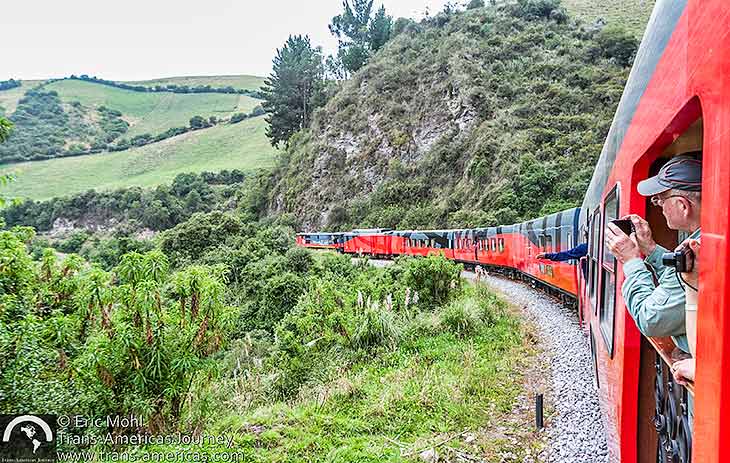 Rounding a bend on the Tren Crucero in Ecuador.

Aboard the Tren Crucero train in Ecuador 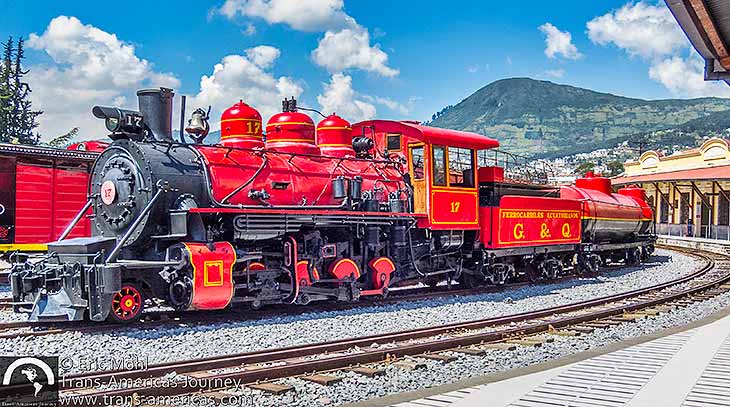 The Tren Crucero locomotive in the Quito train station at the start of our trip.

You can do your Tren Crucero journey from Quito to Guayaquil, traveling from the Andes to the Pacific (as we did), or vice versa. 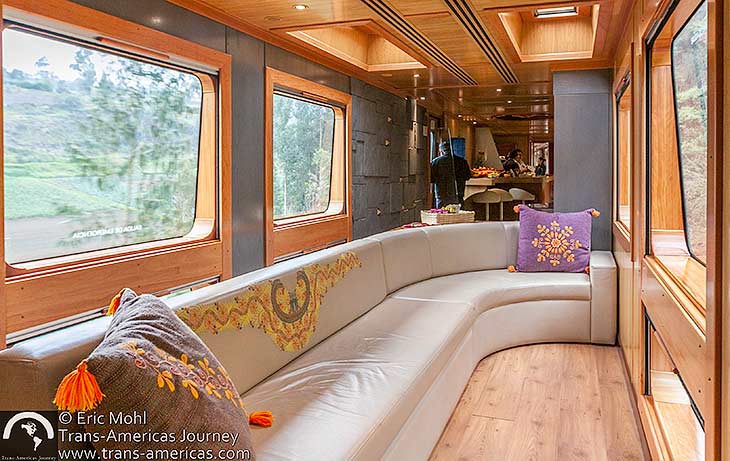 The Tren Crucero was designed with big windows and plenty of comfortable places to sit.

The train itself is plush and comfortable with lots of big windows, sitting areas, and tables from which to relax and watch the world slowly roll by. 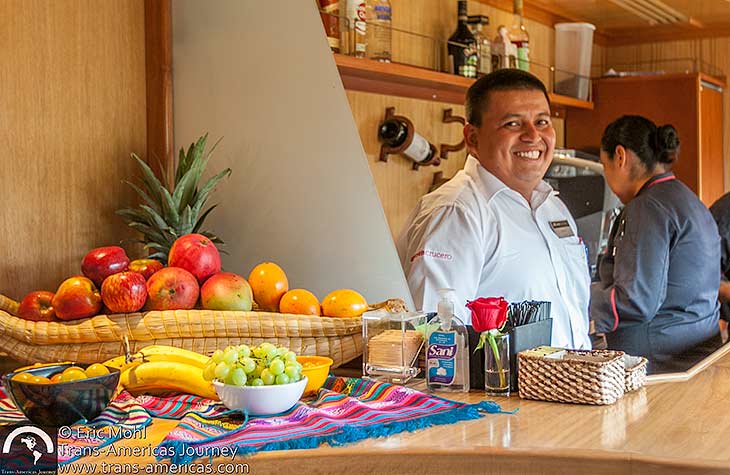 Snacks and smiles on the Tren Crucero in Ecuador.

Attentive and English-speaking staff members are also quick with a drink or a snack or answers to your questions. 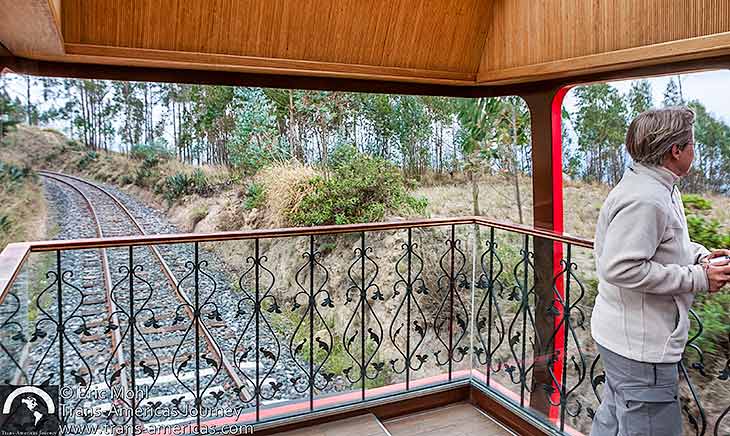 We spent a lot of time in the train’s open-sided observation car just watching the scenery roll by.

The open-sided viewing car at the rear of the train is a great place for taking photos or just feeling even closer to the passing landscapes. We spent a lot of time there. 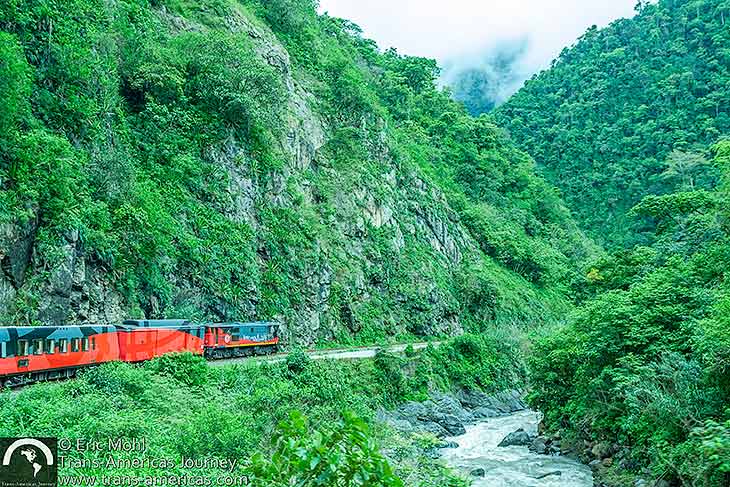 Some days also featured onboard entertainment, including a traditional band that played as they strolled through the cars. 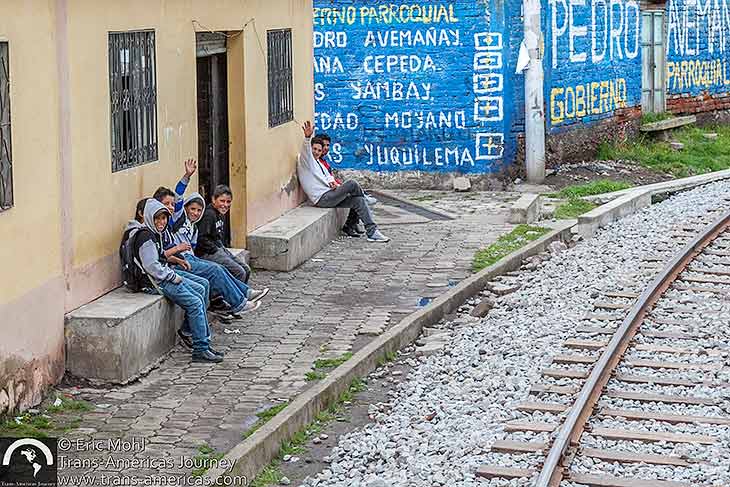 Locals cheering on the train.

The passing of the train is a big deal in the villages through which the tracks pass. Locals wave, dogs bark, and life generally pauses as the train rolls through. 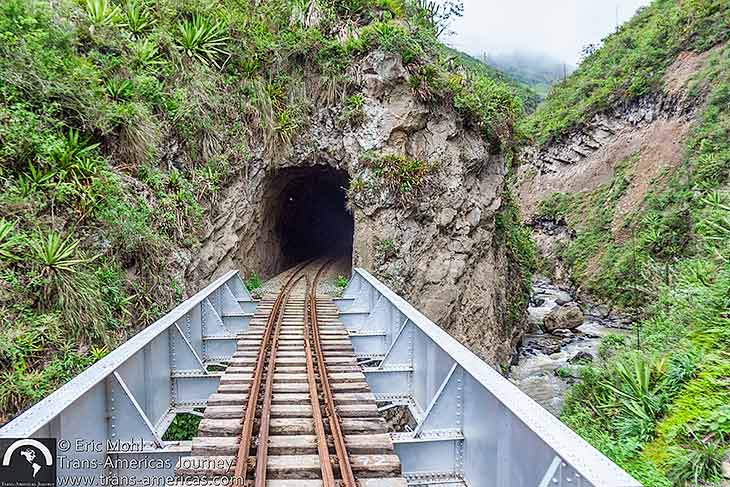 It’s not a train adventure without a few tunnels, especially when you’re traveling through the Andes.

The Tren Crucero itinerary includes many off-train excursions that explore the culture and natural beauty of Ecuador. 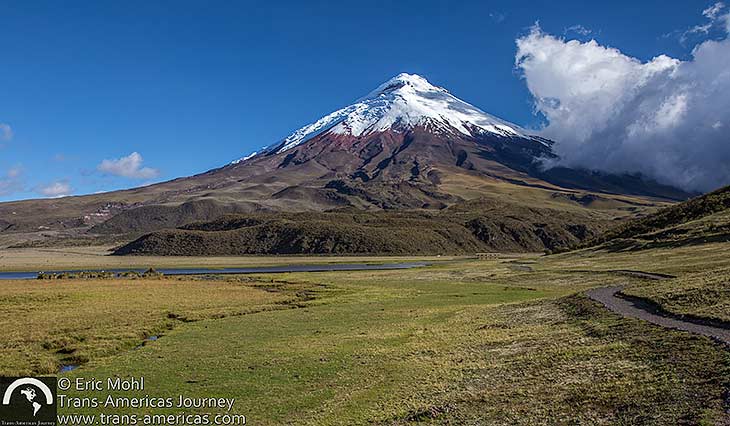 Cotopaxi Volcano in Cotopaxi National Park, which we visited during one of many off-train side trips.

One of our first excursions was a visit to Cotopaxi National Park where wild horses roam and towering Cotopaxi Volcano dominates the horizon. 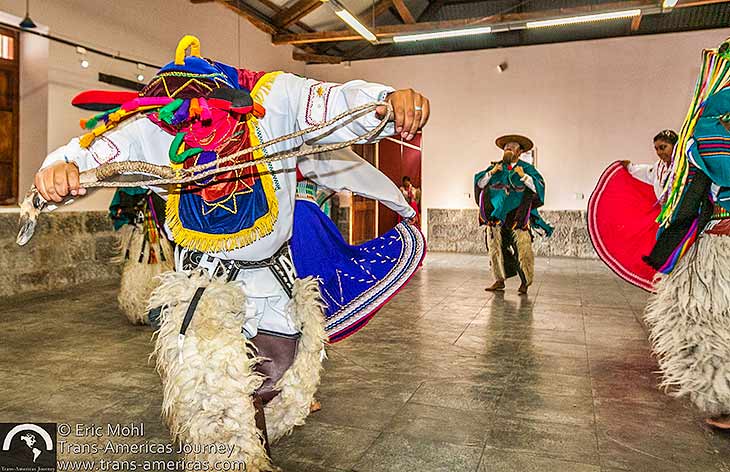 Traditionally costumed dancers put on a cultural show for passengers inside one of the train stations.

A few of the train stations along the way were also used as live performance venues so that we could see various traditional dances of Ecuador. 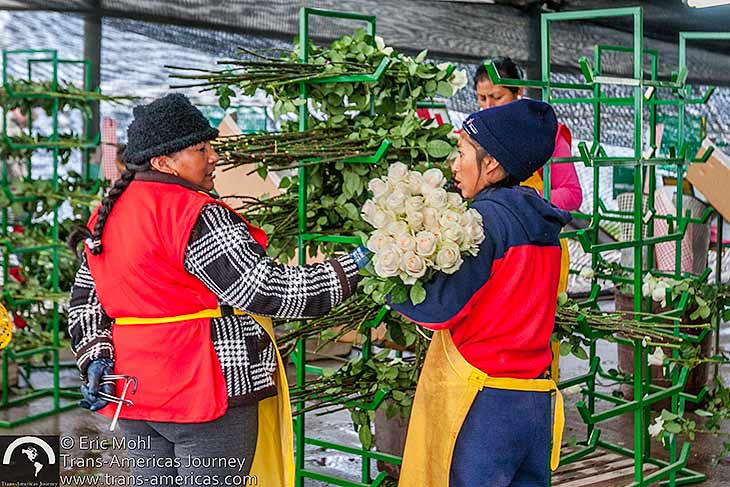 Do you know why Ecuador grows some of the best roses in the world?

We also toured one of Ecuador’s many rose farms where we learned the surprising reason why Ecuador produces so many of the best roses in the world. Find out why in our post from inside a rose farm in Ecuador. 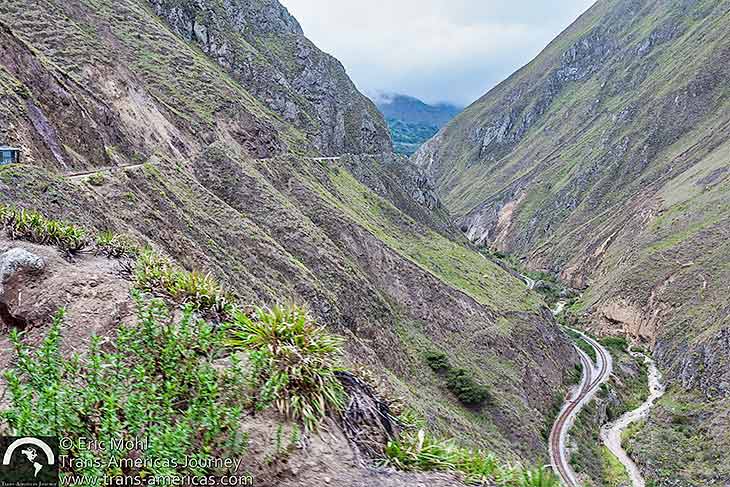 Switchback track navigates around The Devil’s Nose rocky outcrop which must be passed during the Tren Crucero trip.

Building a train line through the Andes was not easy, but one particular rocky outcrop required amazing engineering. This spot is now called the Devil’s Nose and the Tren Crucero passes through it using a complicated series of track which switchbacks along the steep section, sometimes requiring the train to travel in reverse. See what that train travel adventure looks like in our photo essay about the Devil’s Nose. 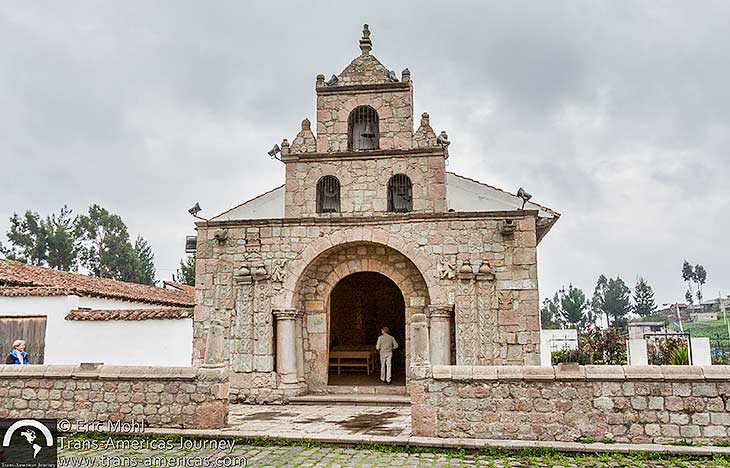 Iglesía de Balbanera is the oldest Catholic church in Ecuador.

At Laguna de Colta, we got off the train long enough to visit the Iglesía de Balbanera near the train station. Built in 1534, this small baroque structure is the oldest Catholic church in Ecuador. 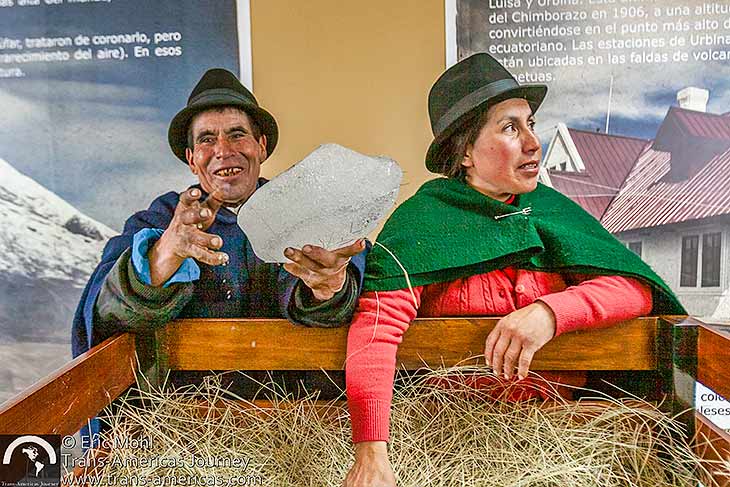 Baltazar Ushca, here with his daughter, still harvests ice by hand from the glacier on the flanks of the Chimborazo Volcano.

At the Urbina train station, we met a local man named Baltazar Ushca. He’s better known as the last iceman of Ecuador because he still collects ice by hand from the glacier on the flanks of the nearby Chimborazo Volcano. 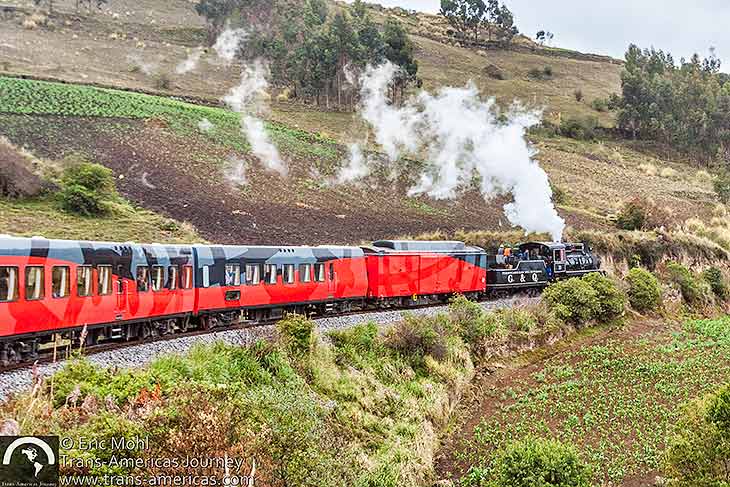 The steam engine pulling the Tren Crucero during this leg of the journey is called “The Black Monster”.

Passenger trains are rare enough, but steam engines are even rarer. At one point in the journey, the Tren Crucero is hooked up to a steam engine known as “The Black Monster” for part of the transit. 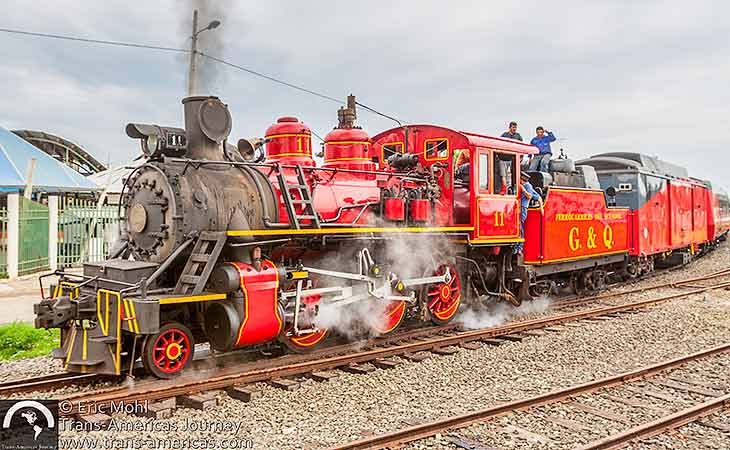 The second steam engine used during our trip on the Tren Crucero.

A second steam engine was also used briefly as we approached the city of Guayaquil. 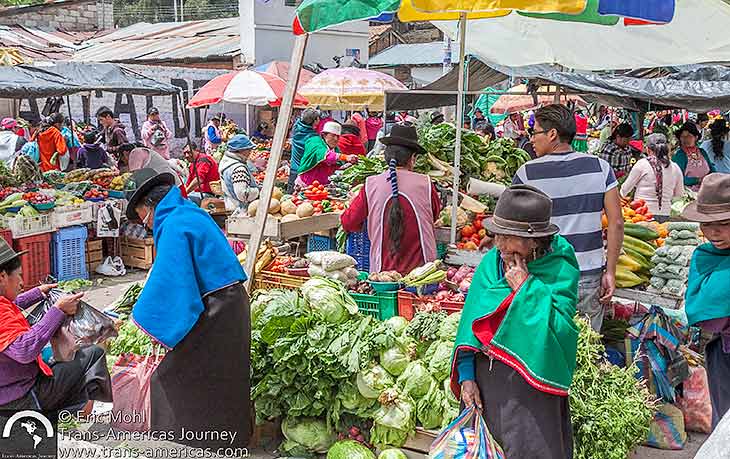 Locals shopping for daily necessities at the Guamote market.

Tren Crucero itineraries are crafted so that passengers arrive at the train station in the town of Guamote with time to wander around the very authentic market there. See more in our full photo essay from the Guamote market. 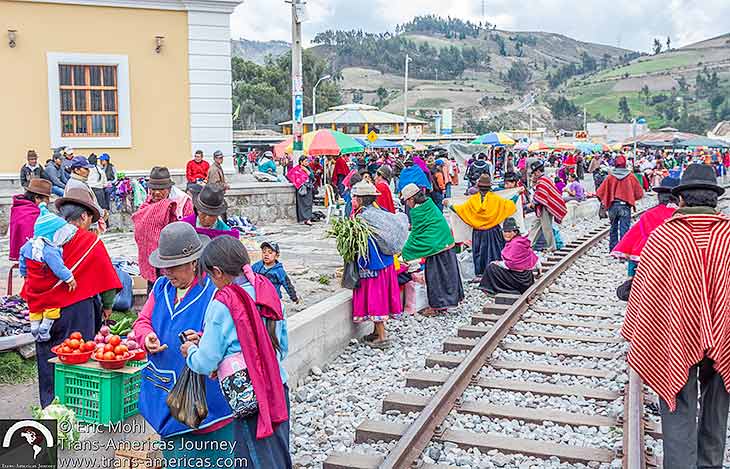 There’s no tourist junk at the Guamote market which Tren Crucero passengers visit as one of many off-train activities. 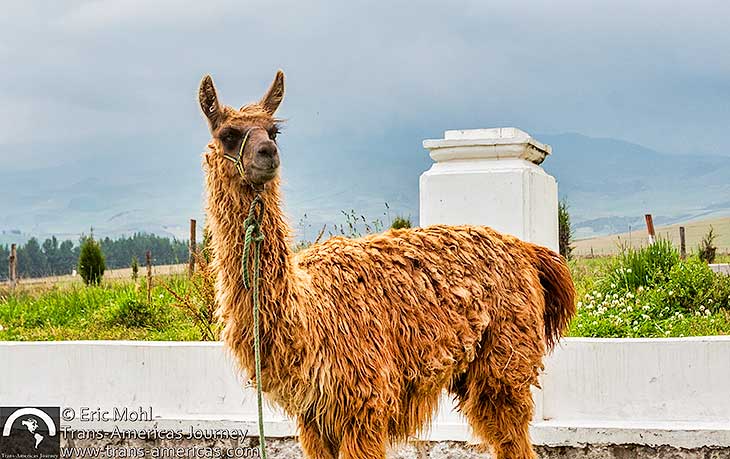 We did not eat this llama, but we did eat alpaca for the first time during our Tren Crucero trip.

While snacks and drinks are provided on the train, meals are enjoyed at area restaurants and feature many Ecuadorean specialties including locro soup and alpaca. 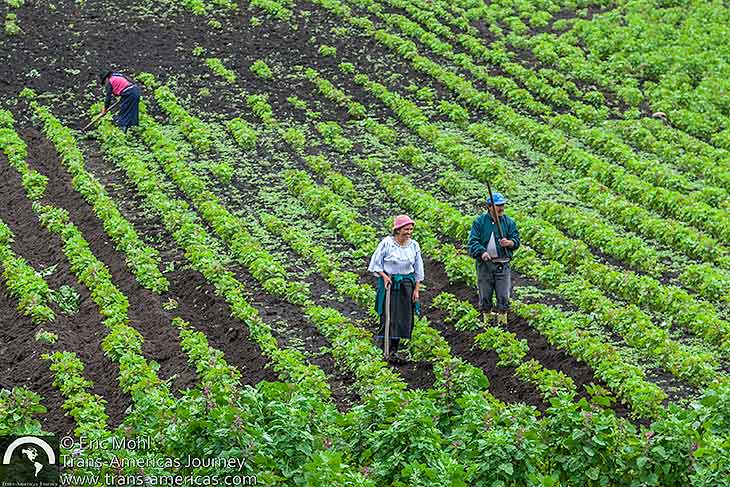 Glimpses of Ecuadorean farm life from the Tren Crucero train.

The scenery changes every day as the Tren Crucero travels through villages, past small farm plots, around Andean peaks, and then down through lowland lushness to the Pacific (or vice versa). 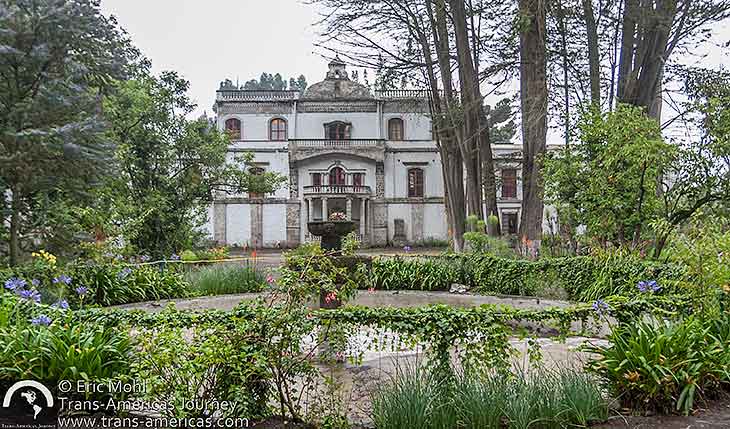 We spent a night in Hacienda La Cienega hotel during our trip on the Tren Crucero.

The Tren Crucero is not a sleeper train, so nights are spent in hotels along the way. Many of the accommodations are in haciendas which have been transformed into history-filled hotels (like the one above). Those who pay a supplement for Gold Class transit stay in better hotels or in better rooms. 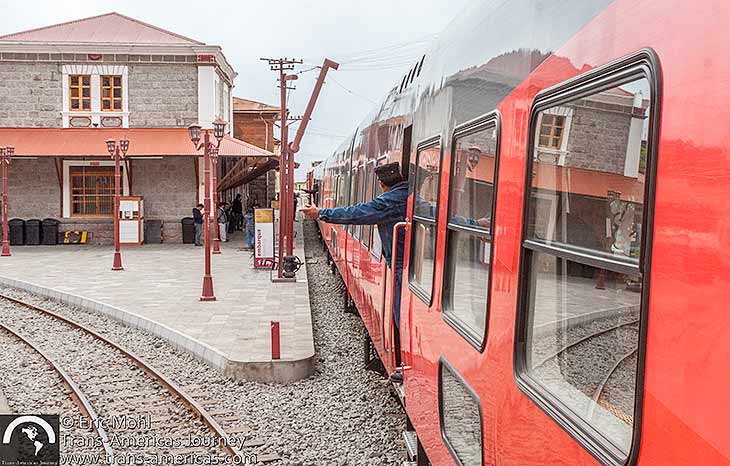 Pulling into the Alausi station.

See some of what we saw from onboard the Tren Crucero in our video, below.

Yes, the Tren Crucero trip is very expensive by Ecuadorean standards (outdone only by travel in the Galapagos), but if you love trains, have the funds, and want many of the best elements of Ecuador’s beauty and culture packed into one tidy, no-brainer itinerary then a Tren Crucero trip is for you. Get more details about this adventure on the rails in our story about travel on the Tren Crucero for The Dallas Morning News. 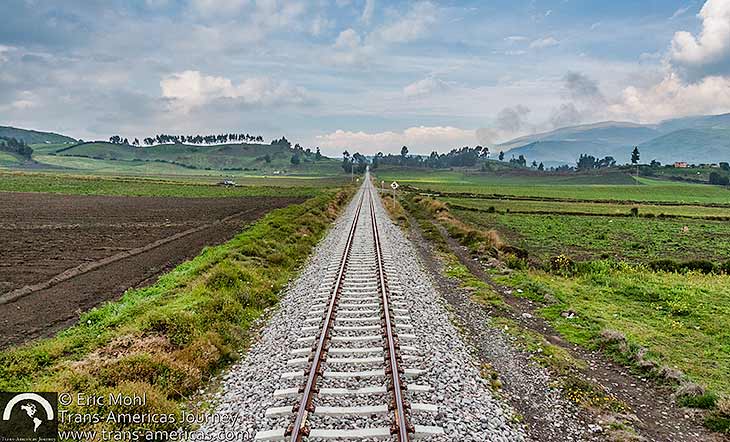 The train rolls on.