The third-largest city in Peru lays claim to many important elements of Peruvian culture and history. Use our Trujillo travel guide to get the most out of this proud coastal city in the north including urban archaeology, plenty of architecture, one weird museum, great seafood, and a nearly mile-long mural. 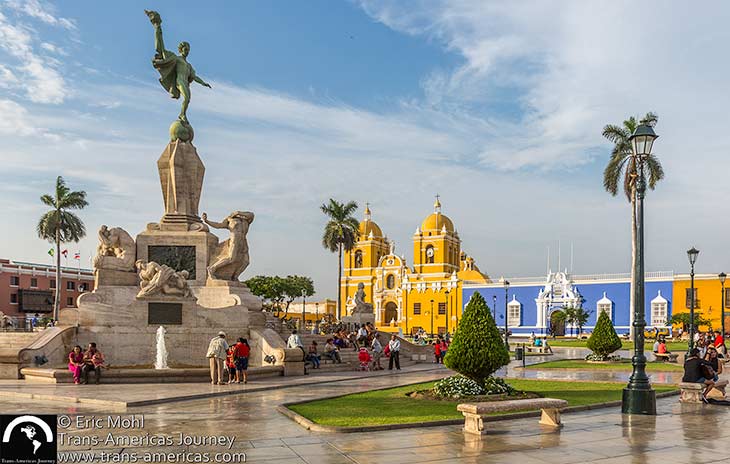 Trujillo is located on the Moche River where it flows into the Pacific, but there’s no real coastal vibe here (for that you need to go to the nearby beach town of Huanchaco). 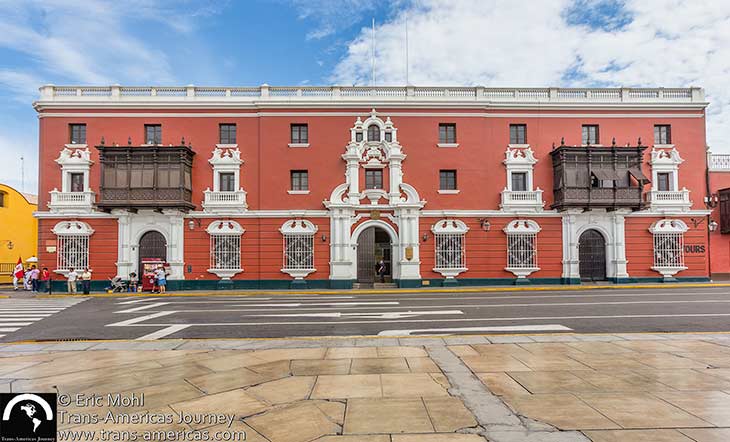 Colonial architecture is a given in Trujillo, Peru which was founded by Spanish conquistadors in 1534 but was occupied by various Indigenous groups long before that.

In 1822 by the Congress of the Republic of Peru gave the city the title “Meritorious City and Faithful to the Fatherland” in recognition of Trujillo’s role in achieving independence from Spain. 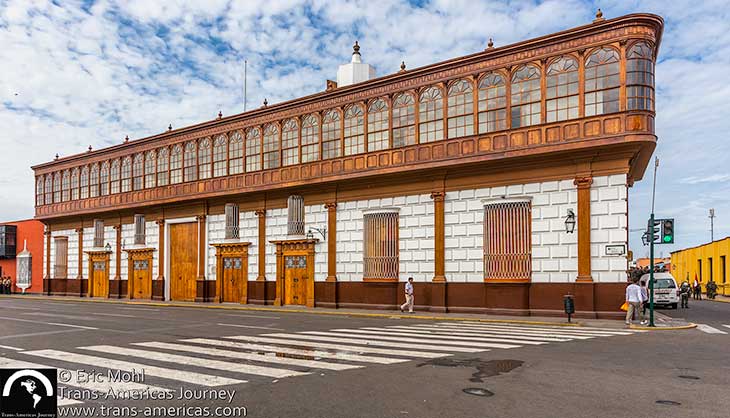 We love the shape of this historic building and the elaborate woodwork on the upper level.

Trujillo has served as the capital of Peru twice and still claims to be the Capital of Marinera music (essentially the national music of Peru which is celebrated with a Marinera festival in Trujillo in January), and also claims to be the center of Peruvian Paso horse culture. 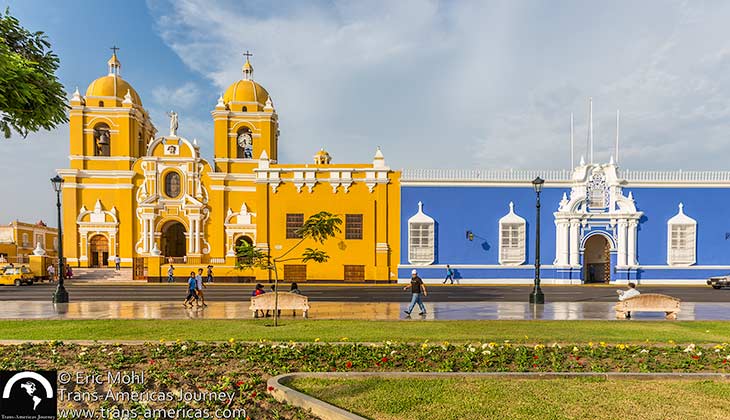 The cheery yellow cathedral in Trujillo. 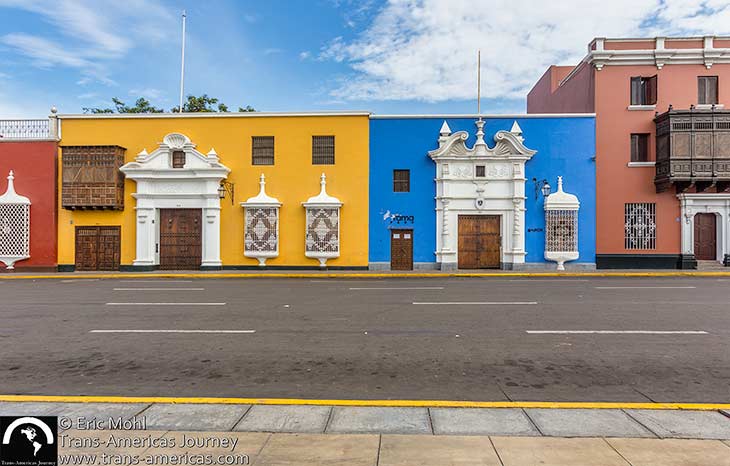 More colonial architecture in Trujillo with a special emphasis on decorative doors and windows.

Many travelers use Trujillo as a base for archaeological exploration, but here are our tips about Trujillo travel within the city itself. 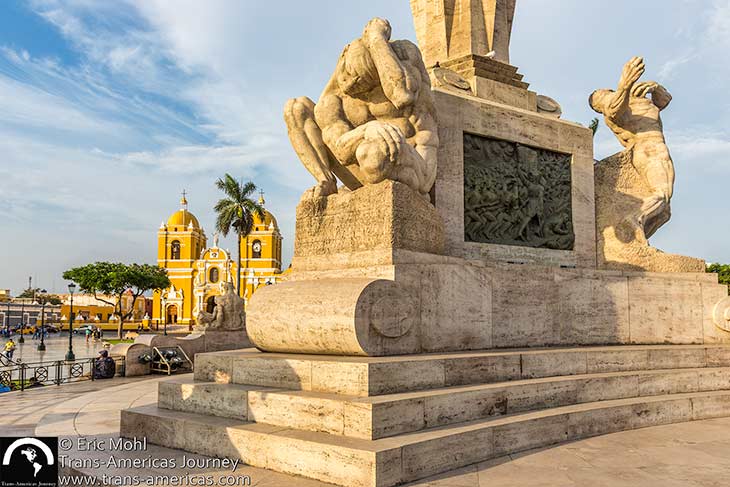 Can anyone explain the symbolism of these strikingly modern figures around the fountain in the Plaza de Armas in Trujillo?

Pro tip: Though sometimes called the City of Eternal Spring, temperatures in and around Trujillo can get mighty steamy, so it’s best to do your explorations in the cooler morning and afternoon hours.

What to do in Trujillo, Peru

The city’s Plaza de Armas is almost always full of activity and is kind of nexus of Trujillo travel (and don’t miss the weird sculptures around the fountain per the picture above). 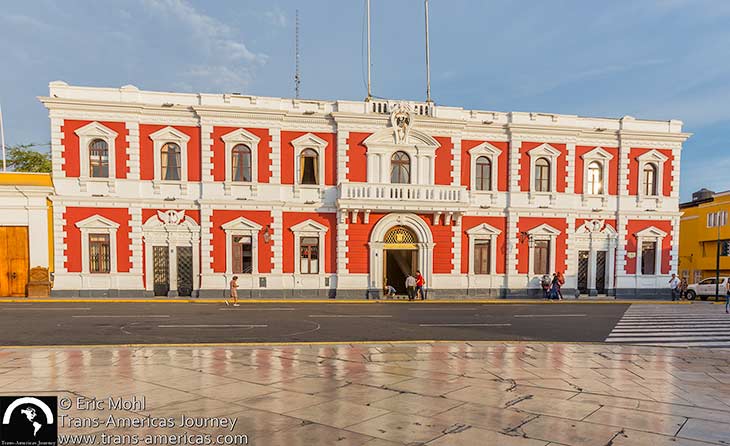 Even City Hall is painted in bright colors in Trujillo.

The Plaza de Armas is also ringed by good examples of 18th and 19th-century architecture.

Some of our favorite doors and windows in Trujillo, Peru.

Many of these gems wouldn’t be in such great shape (or exist at all) if businesses, including banks and airlines, hadn’t taken over many of the city’s historic mansions and turned them into offices, thus saving and preserving them. Many of these buildings remain open to the public so you can go in and appreciate the splendor even if they’re now places of business. 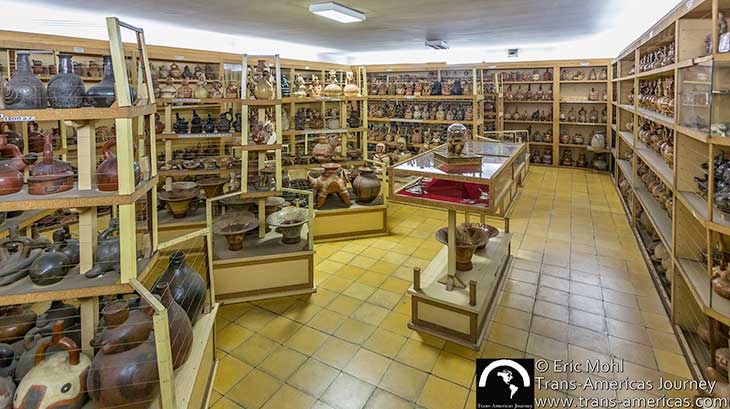 The massive private collection in the Museo Arqueologicio Jose Cassinelli Mazzei is one of the oddest and most impressive Trujillo travel moments.

Trujillo is home to one of the oddest museums we’ve ever visited. Museo Arqueologicio Jose Cassinelli Mazzei (7 soles or about US$2) is in a basement under a defunct gas station about 10 blocks from the main plaza. The namesake owner, who died in 2012, amassed more than 6,000 artifacts. The collection is mostly pottery but you’ll see some gold and silver items and some textiles as well. How did he get so much high-quality stuff? The huaceros (tomb robbers) knew that he’d pay for good pieces so they brought the top finds to him first. During our visit, we saw styles and designs we hadn’t seen anywhere else. Pieces are also grouped together and labeled with the culture and the era that they’re from which makes it fun and easy to compare Nazca stuff to Moche stuff and beyond. After the creator’s death, his kids took over the place. Sadly, at the time of writing it seemed like this museum had been shut down. 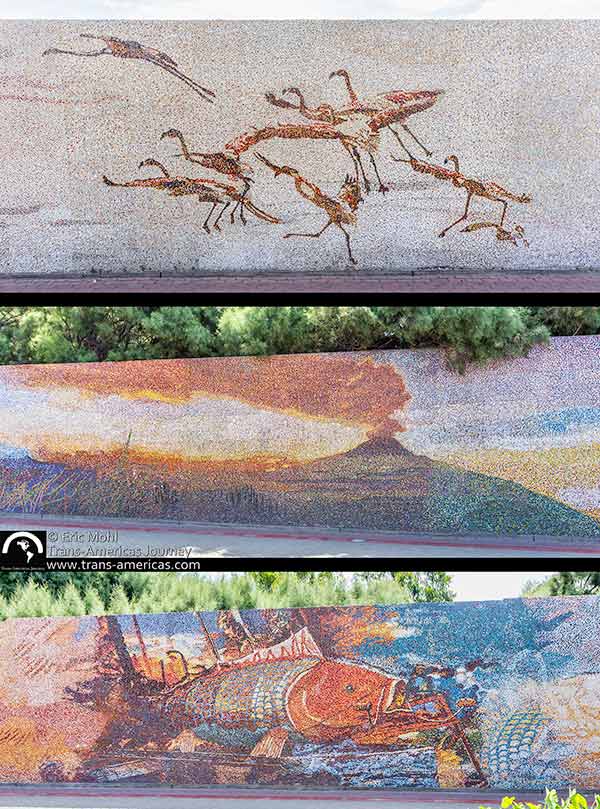 Mosaics depicting the natural world in the long and detailed mural project around the National University in Trujillo.

For a hit of street art with a twist, head to the National University in Trujillo where the wall around this large and attractive campus has been covered in mosaic murals. 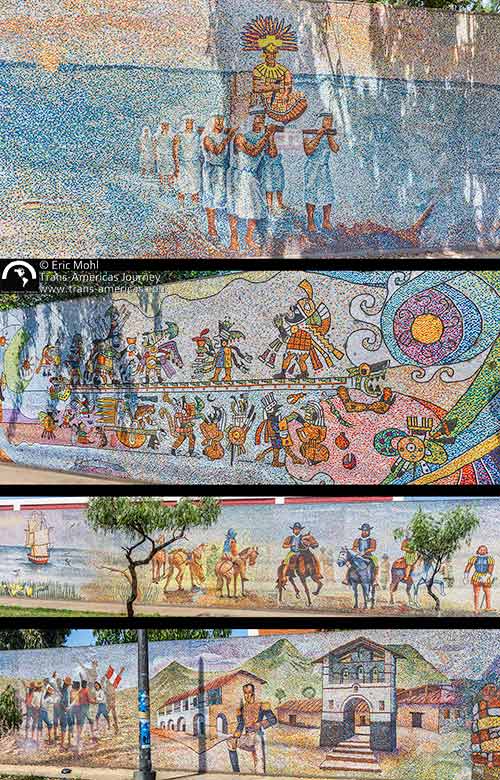 Mosaics depicting Indigenous culture and moment in Peruvian history within one of the longest murals in the world.

The mosaic project took nearly 20 years to complete and is considered to be one of the longest murals in the world (it’s 0.65 miles / 1 km long and covers 322,917 square feet / 30,000 square meters). Many different artists, lead by artist Rafael Hastings, produced mosaics depicting everything from volcanoes to wildlife to moments in history to Indigenous culture, and much more. 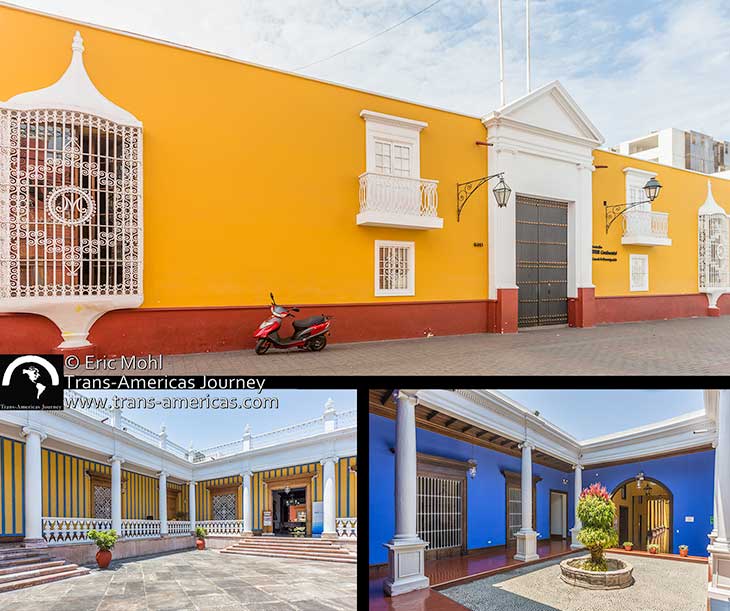 The exterior of the La Casa de la Emancipación museum (above) and two of the interior patios.

Like we said, private business has stepped in to take over many of the historic buildings in Trujillo. That is certainly the case with La Casa de la Emancipación (sometimes called La Casa de Las Ventanas because of the building’s ornate windows) which Banco BBVA owns. This building, constructed in a mix of colonial and republican styles, is where Trujillo declared its independence from the Spanish in December of 1820. Today the bank operates it as an architectural and historical attraction and the building also hosts rotating art exhibits. 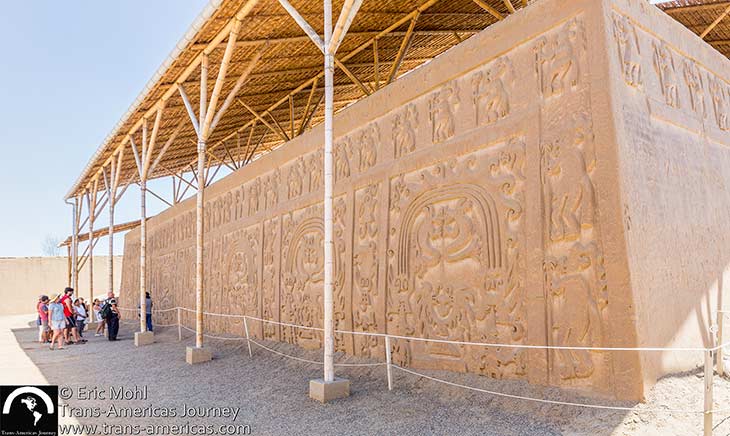 One of the massive decorated walls at the Huaca Arco Iris archaeological site within the city of Trujillo.

Not many cities have archaeological sites within city limits, but Trujillo has two. The Huaca Arco Iris archaeological site (sometimes called Huaca El Dragón) was created by the Chimú culture and is located in the La Esperanza area of the city. The site, which dates back to the 12th century, is essentially just one large temple that experts believe may have been dedicated to fertility, rain, and the harvest. 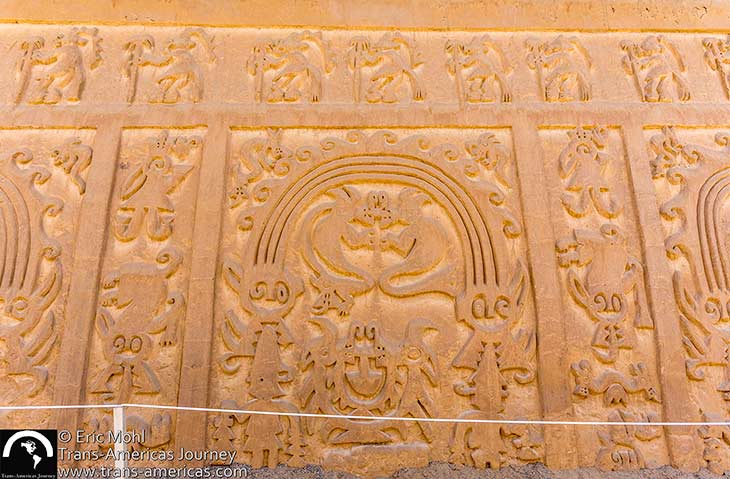 This detail of friezes on a wall at the Huaca Arco Iris archaeological site clearly shows the repeating rainbow motif that gives the site its name.

The walls of the temple are covered with identical friezes including rainbows (arco iris in Spanish) and anthropomorphic figures representing the cycle of rain and harvest. Each of the rainbows has what looks like waves on top. Part of this temple is on the 20 soles bill. Wooden sculptures have also been found here (10 soles or about US$2.70 including entry to Huaca La Esmeralda and the Chan Chan archaeological site outside of the city). 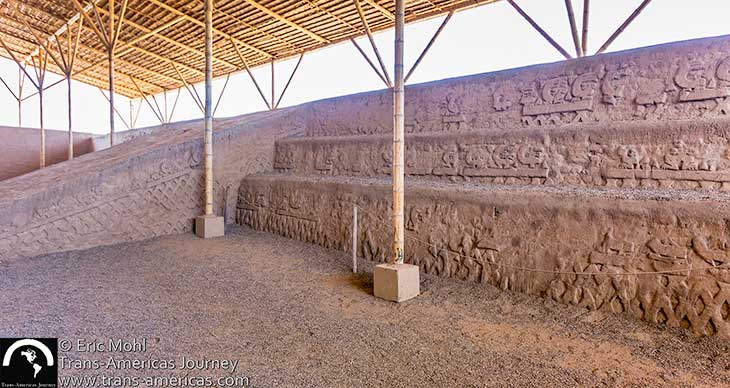 A protected structure at the Huaca La Esmeralda archaeological site within the city of Trujillo.

Huaca La Esmeralda was also created by the Chimú culture and experts believe the main structure may have been a palace. The friezes here are less spectacular than those at Huaca Arco Iris, but this site, located just a 30-minute walk from the historic center of Trujillo, is literally surrounded by a modern neighborhood and that juxtaposition is intriguing.

Where to eat in Trujillo, Peru

Perhaps an even better sandwich can be had at the extremely popular and very old school Plaza Chicken Grill on the main plaza where thick slices of tender pork are put on a toothsome roll along with aji pepper sauce, cabbage salad, and love (10 soles or about US$2.75). 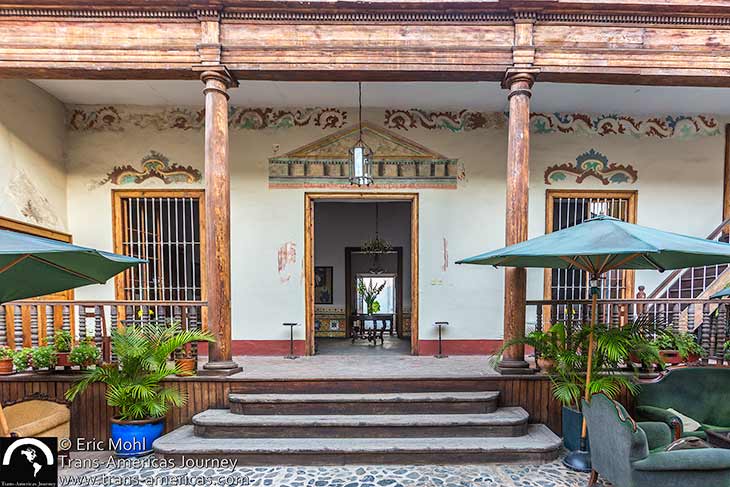 Casona Deza, the café in the Casa Ganoza Chopitea mansion, will look totally locked up until about 4 pm when massive doors swing open to reveal the café that serves homemade pasta, decent-looking pizza, and Peruvian dishes. There’s also a bar and a coffee bar plus large patios, original murals, and modern art installations. Bonus: this is said to be one of the best-preserved mansions in the city (sometimes called Casa de los Leones) with intricate colonial architecture dating back to 1735. 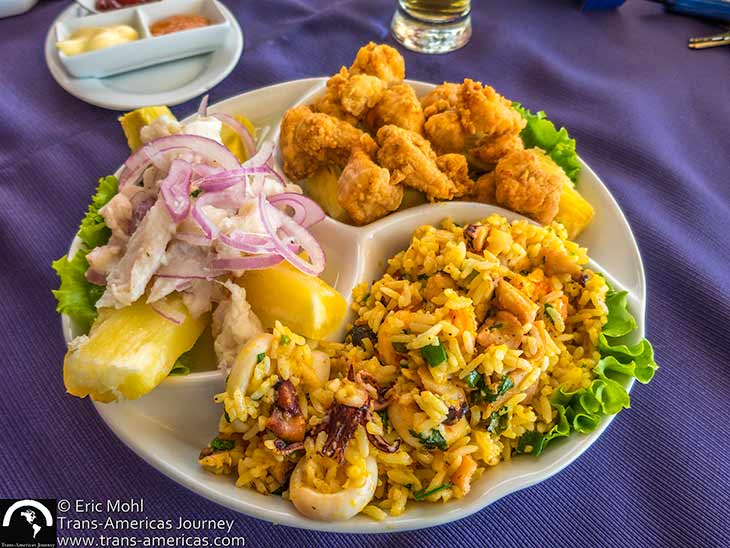 The delicious Fantasia Combo at Mar Picante restaurant in Trujillo.

As we walked into the packed and bustling Mar Picante, a large and airy restaurant with a seafood-centric menu that draws crowds, a pan flute player was belting out his cover of Madonna’s “La Isla Bonita” and waitresses were pushing around trollies loaded with Jell-O, flan, and other desserts. Our lunch started with creamy white beans in leche de tiger followed by the Fantasia Combo (30 soles or about US$8) including fresh mixed ceviche and chicharron de pescado (Peruvian fish and chips) in a light and tasty batter. Our fish filet in a seafood sauce was good, but the sauce was a bit heavy. Don’t miss their refreshing freshly made lemonade.

Where to sleep in Trujillo, Peru

There are a handful of high-end and boutique hotels in Trujillo, but when it comes to location, architecture, and history none beat the Hotel Costa del Sol Downtown. 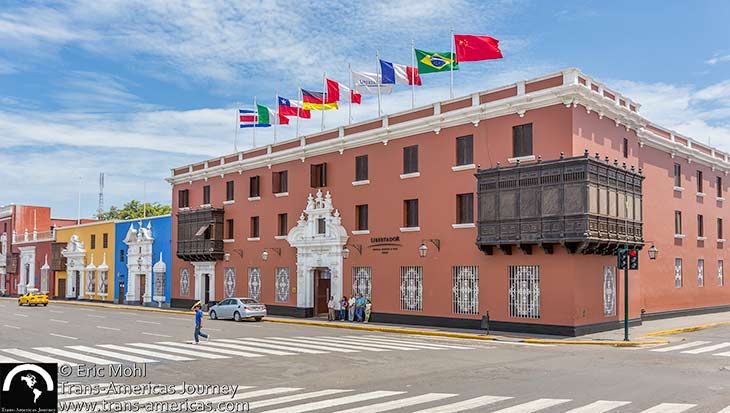 The Hotel Costa del Sol Downtown Trujillo occupies this prime corner in a building that dates back to1778.

Located in a building on the Plaza de Armas that dates back to 1778 (though modern additions have been made through the years), this place was turned into a hotel in 1994. The original parts of the construction have atmosphere to spare including carved wooden shutters meant to protect the privacy of women inside (they could see out but no one could see in). It’s worth the splurge for room 200 or 207 which both face the plaza and have original architectural elements including those shutters and private balconies over the plaza. Even if you’re not staying at the hotel, pop in for a look around.

Kallpa Classic Hotel, a low mid-range option a residential neighborhood about a 20-minute walk from the center, is sleek and modern with a wide range of room types–some less desirable than others, so check your room before committing. Our room (#504), for example, was tiny (the bathroom door wouldn’t fully open because it hit the toilet and the sink was by the bed) but it was spotless and the air conditioning worked well.

Hotel Colonial is a good mid/budget option right in the center. Our private room with a private bathroom, fan, Wi-Fi, and breakfast was 140 soles (US$37). 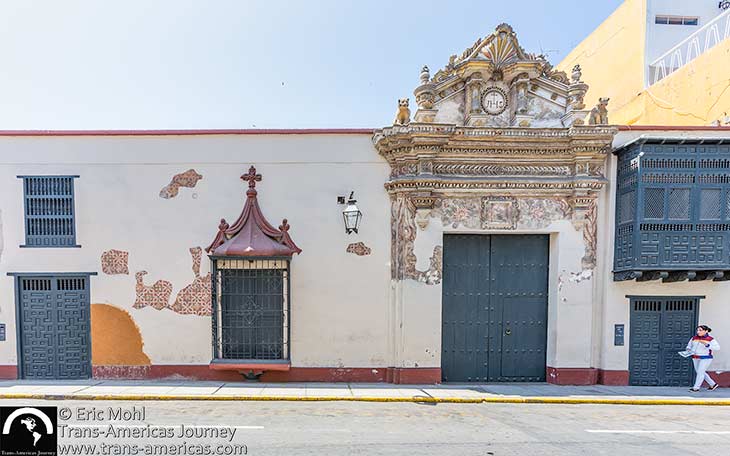 Layers of history in Trujillo, Peru.