We’ve been in Mexico for about five months now and we have yet to find a single person who needs more than the vaguest excuse to throw a party. First, second, third or fourth Wednesday of the month? Good enough. Got to the gas station before the morning rush? Let’s celebrate! Cat had kittens? Party at my house! So when a town like Union de Tula celebrates its 188 birthday you can be sure of a good time. 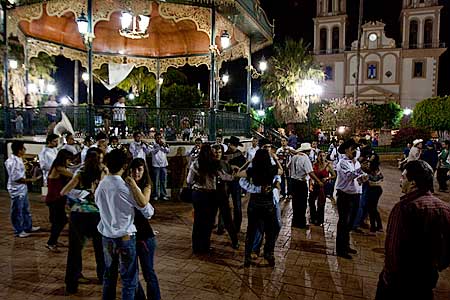 No one in the plaza in Union de Tula, Mexico can resist the driving rhythm of a banda band, even at 1 am.

The only thing that seems closer to a Mexican’s heart than a good party is his or her hometown. Between the family ties and fond memories, Home has an almost cosmic pull on most Mexicans. So when your hometown throws a week long fiesta you clear your schedule.

We were invited for the first weekend of the 188th Anniversary Celebration of a hte creation of a town called Union de Tula which is where our friend Iliana’s father, Cosme, was born and where his heart still lives. Cosme has built up the virtues of Tula (as everyone calls it) quite a bit so our expectations were pretty high and Tula does not disappoint.

The town has a gorgeous and extremely well-kept plaza, sunny streets, and an ever-growing crowd of revelers many of whom have returned home from other places in Mexico or even from the United States and Europe just for the party.

The party doesn’t disappoint either. A general air of fun (and the steamy pre-rainy season weather) inspire us to grab a refreshing michelada (a mix of beer, spices, salt and lime juice over ice–like a Mexican bloody Mary) at El Torreo bar and restaurant right on the square. Properly hydrated, we head for the La Loma neighborhood where a central street has been blocked off and filled with folding tables and chairs around s stage.

Check out our video, below, of late night banda music in Tula’s main plaza.

Everybody knows Cosme and his beautiful wife Cristina, but Eric and I are strangers. However, we soon have a heaping plate of birria (a sort of slow cooked delicious stew) and rice and beans in front of us along with a cold Sol beer. It’s delicious and loud and friendly and hot and all the best things about Mexico rolled into one mega street party. If only we could do it like this in New York City! 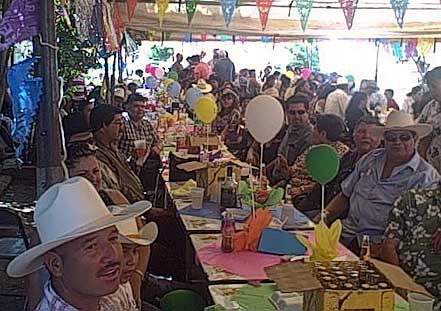 During each day of the week-long anniversary celebration in Tula, a different neighborhood hosts a street party complete with free music , food, and beer for all.

Just when things seem as festive and colorful as they can get, a group of women dressed in layers of colorful skirts and shockingly white blouses arrives. They are escaramusas, or cowgirls, who perform in Mexican rodeo events riding side-saddle. They are Karen’s new heroes, by the way: pretty, talented, and proud. 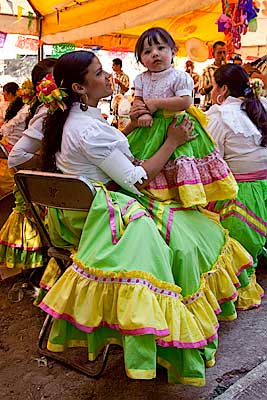 Cowgirls, or escaramusas, come in all sizes.

Enjoy a small portion of the formidable horn section of Banda Nueva Union in our video, below.

We all talk and laugh as the band, Banda Nuevo Union, plays loudly (even without amplifiers). Banda music is an offshoot of military bands and retains a relentless marching rhythm that, love it or hate it, gets the feet moving. One tiny cowboy plants himself in front of the band and dances is little heart out. And he’s GOOD. So good that our video of him, below, has become one of the most popular videos on our Trans-Americas Journey YouTube Channel.

It’s not a party without a rodeo… 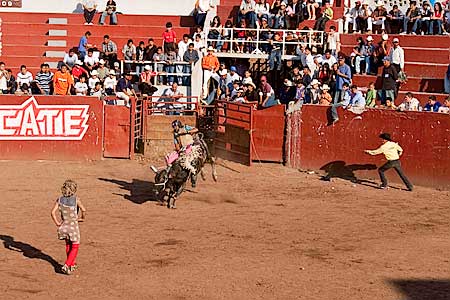 It wouldn’t be a Mexican fiesta without a daily rodeo.

Full and happy and banda’d out, we leave La Loma and head for the rodeo (called  charreada in Spanish) where entrance is free for the whole week of the fiesta. Our hosts from La Loma are not far behind and the charreada kicks off with some of them taking to the ring and hurling candy and oranges into the stands. Dangerous, but fun. By the end of the weekend we are exhausted and happy.

Enjoy the church bells going wild in the Tula plaza in our video, below.

If we ever forget what we love so much about Mexico, we’ll book a return trip to Tula during a fiesta so that we can be reminded that no one in the world (that we’ve met, anyway), knows how to throw a fun, friendly fiesta like Mexicans. 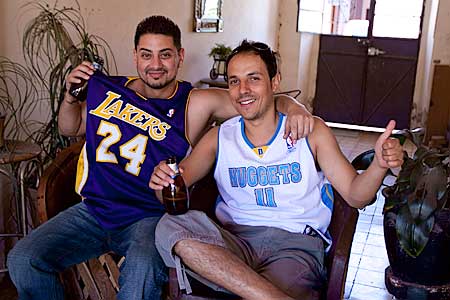 Abraham (left) and Edgar (right) have lived in the United States for much of their lives (long enough to have picked favorite teams in the NBA playoffs), but their real roots remain in Union de Tula, where they return for fiestas and family.