You want the beauty and peace of a deserted island but with the comfort of good food, good company, and even A/C? Welcome to Turneffe Atoll, Belize’s biggest SCUBA secret, including the famous Blue Hole. 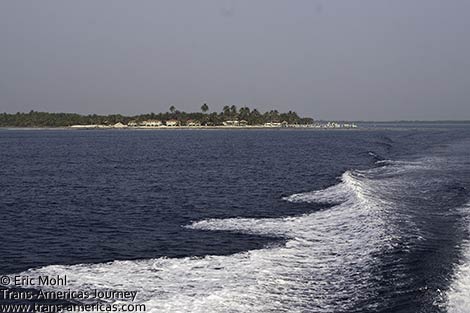 Located about 30 miles (48 km) and about 90 minutes by boat out in the open ocean east of Belize City, 300 square mile (775 square km) Turneffe Atoll is the largest of only four coral atolls in the entire Western Hemisphere. The second-largest reef in the world passes right by, often within a stone’s throw of the shoreline.

The isolation, lack of any large scale development, and the natural attributes of the atoll make it the most biologically diverse coral atoll in the Caribbean. Sixty species of birds live or migrate through here. The water teems with dolphins and sharks and crocodiles.

But it’s the fish that most people come for.

Fishermen have flocked to Turneffe Atoll for two decades in search of the “grand slam” a dream trio of catches that includes bonefish, permit, and tarpon which are all available in the mangroves and shallows around the atoll. Over the years Turneffe Flats Lodge has quietly developed a fanatical following of fly fishermen who return again and again and tell fellow fishermen about the atoll and about the lodge in hushed reverential tones. 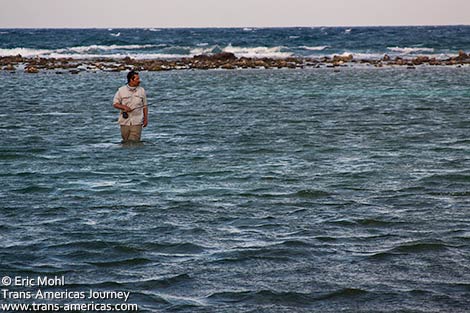 Many guests at Turneffe Flats Lodge can’t stop fishing. Luckily, all you have to do to get a fix is wade into the sea right in front of the lodge and cast a line.

Everything about Turneffe Flats Lodge is designed to have a minimum of environmental impact. Gray water is collected and reused for irrigation, glass is crushed and re-used on-site in building materials, rainwater is collected in massive reservoirs, and there’s an on-site water desalination and purification system. Rooms are simple but very comfortable, common areas are inviting, meals are massive and delicious, and there’s always a guide around ready to answer questions, give a lesson, or arrange an excursion. 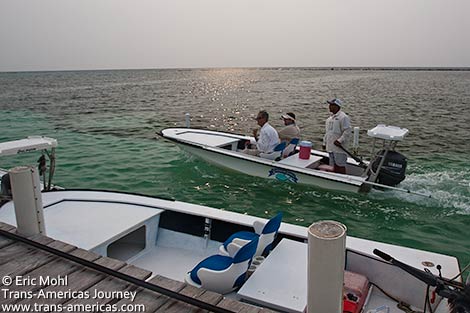 Fly fishermen head out in pairs with a private guide in search of the grand slam trio of fly fishing:  bone fish, permit, and tarpon.

We aren’t fishermen but we are SCUBA divers so we traveled to Turneffe Flats Lodge to look at the fish, not catch (and release) them. Our video, below, will give you an idea of just how gorgeous this commute it.

Turneffe Flats Lodge added a SCUBA diving program in 1994 essentially to provide activities for non-fishing partners of fishing guests. Today their polished program includes a spacious, comfortable and easy to board 48′ dive boat (the Miss Ellie) and an excellent staff of dive masters and captains including Eli Rodriquez and Alex Edwards, Belize’s Guide of the Year in 2007.

Unlike other dive operations that service the atoll, the staffers at Turneffe Flats Lodge are knowledgeable about and happy to take you to any of the more than 60 dive sites around the atoll. This means if the seas are rough on one side of the atoll, the dive masters simply choose an amazing site on the other side of the atoll where conditions are calmer. 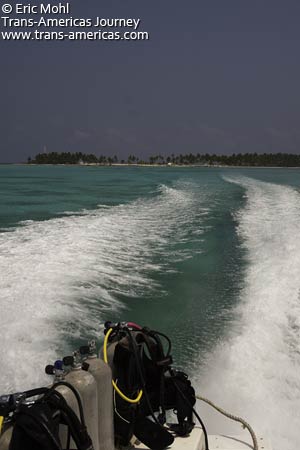 The Miss Ellie takes us out to explore one of the more than 60 dive sites around Turneffe Atoll.

And what dive sites! During our time on Turneffe Atoll, we explored a dozen sites and spent almost 11 hours underwater. With visibility up to 100 feet (30 meters) and such a rich marine environment we were able to see spotted eagle rays slowly flapping by like underwater birds, loggerhead turtles, colorful and diverse coral formations (soft and hard), big schools of creole wrasse which flash by in a blur of black and blue, tiny snapping shrimp (which really do snap), spotted toadfish, peppermint shrimp, dancing crabs and a remora (aka suckerfish) so big it had a smaller remora attached to it and lots more.

The famous Great Blue Hole, part of the Belize Barrier Reef System which is a UNESCO World Heritage site,  is also accessible at nearby Lighthouse Atoll. During our hour-long boat ride to the site we were escorted part of the way by a pod of spinner dolphins. Check them out in our video, below.

Diving the Blue Hole in Belize

The Blue Hole is a world-famous dive site. Though we’d had all of the other dive sites in the area to ourselves, we found a small crowd at the Blue Hole. Alex and  Eli got us out there early enough to get a mooring, however, and we were soon in the water. 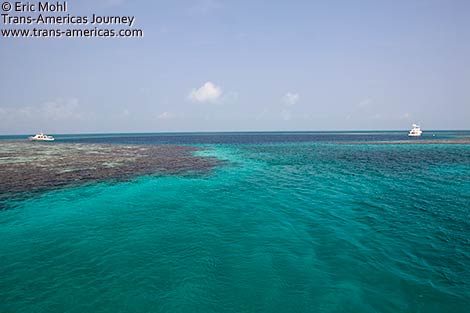 The big attraction at the other dive sites in the area are the coral formations and the marine live. At the Blue Hole the big attraction is depth and a lot of it. As its name implies, this site is a big hole (really a massive flooded sinkhole) that goes straight down nearly 500 feet (152 meters).

Our plan was to descend to a max depth of 130 feet (40 meters)–a deep but safe dive that would take us down far enough down to check out the cave’s ancient and massive stalagtites, now dangling eerily underwater. Once down there we swam among the sequoia-sized formations in the semi-dark water. 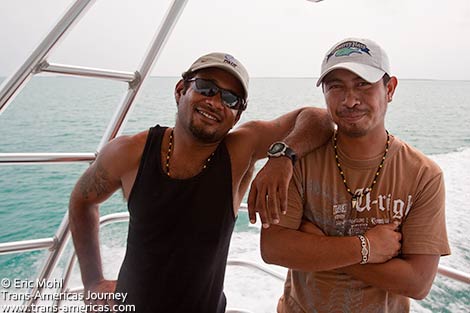 Dive instructor and boat captain Alex Edwards (left) and dive master Eli Rodriquez are rock stars above and below the water.

With so much going for it you might reasonably think that divers would be flocking to Turneffe Flats Lodge. The extraordinary truth is that hardly anyone does. While other dive operations run packed boats and toss large groups of divers into the water, a typical dive trip at Turneffe Flats Lodge includes two to six divers which means everyone can enjoy the space and comfort of the Miss Ellie and get the personal attention of Alex and Eli who provide live-aboard quality service.

Really, we’d almost prefer to keep Turneffe Flats Lodge to ourselves as our own personal SCUBA secret, but it’s so good it has to be shared. You’re welcome. 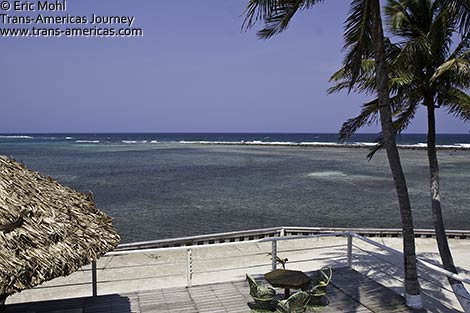 The second-longest reef in the world breaks just a few hundred feet from Turneffe Flats Lodge.

An equally important reason to visit Turneffe Flats Lodge are its owners, Karen and Craig Hayes. They have an entrenched passion for the place which they first started visiting back in the ’70s and they’ve developed Turneffe Flats Lodge with ecological and hospitality goals.

Increasingly concerned about environmental pressures on Turneffe Atoll, Craig founded the Turneffe Atoll Trust in 2002. In 2003 the lodge became a founding member of 1% For The Planet, a non-profit organization made up of companies who give one percent of their profits to the organization which uses the funds to support eco efforts around the world.

Karen and Craig are an inspiration and a joy for every guest lucky enough to visit them on at Turneffe Flats Lodge. As Craig likes to say: “I failed retirement.”

If this is what failure looks like, we’ll take it. 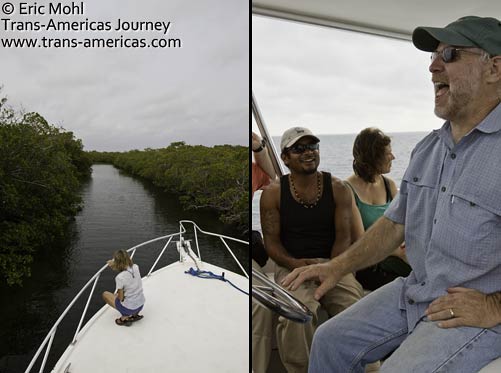 Karen (guiding the Miss Ellie through a shallow stretch of mangroves on the way to Belize City) and Craig Hayes, the passionate and hospitable creators of Turneffe Flats Lodge.

You don’t have to be a fisherman or a diver to appreciate nearby Half Moon Caye Natural Monument. This protected island is a great place to have a picnic and wander along the trails for sightings of the thousands of birds that nest here including thousands of red-footed boobies. 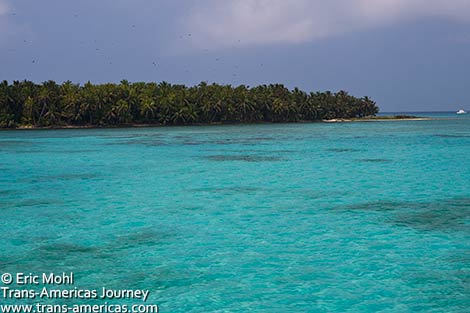 Half Moon Caye Natural Monument is a bird sanctuary inhabited by thousands of birds including the red-footed booby. 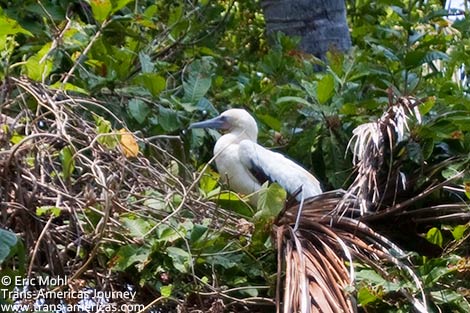 A red-footed booby setting up house on Half Moon Caye Natural Monument in Belize. 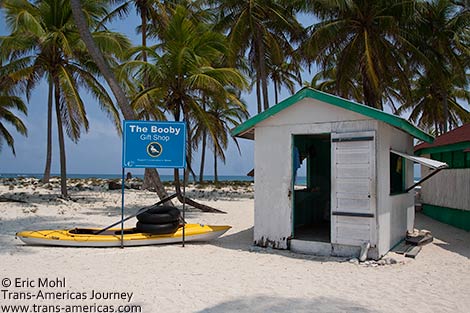 You had to see this one coming…

It’s bright out there so we lived in or Costa del Mar sunglasses (as do most of the boat captains and dive masters we met).

Get more in our full review of Turneffe Flats Lodge for iTraveliShop.