A Rare Sighting on the Beach – Costalegre, Mexico

Early one morning during our stay at Hotelito Desconocido we were alerted that there was a nesting turtle on the beach laying her eggs. Turtles generally lay eggs at night, so this daytime sighting was rare indeed, made doubly rare in the month of February. We rushed to the beach. 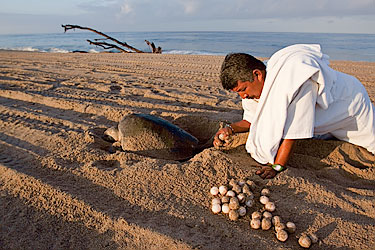 Collecting the newly laid eggs so they can be re-nested in a protected area.

Though the area around the hotel is famous for its turtle visits. In season, this beach is so prolific that the resident biologist informed us he’s seen more than 200 nests dug in a single night. Nesting turtles are very uncommon after February and very, very uncommon to see at 7 am.

The hotel has a fenced-in nesting area designed to keep baby turtle predators ( birds, raccoons, dogs, etc) away from nests and workers re-nest all baby turtles they discover on the open beach near the hotel in order to give the little critters a fighting chance. They have collected and protected around 2,600 eggs so far this season.

When we got to the beach, the female turtle was focused on the task at hand and didn’t seem to notice us or the fact we were pulling the eggs out of the nest as quickly as she laid them. In the end, 95 eggs were re-nested and will hopefully hatch in 45-50 days. 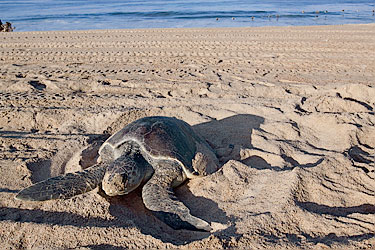 A rare sighting of a nesting turtle in the daylight and in the month of February.

Though we’d removed all of the eggs that she’d laid and re-nested them in safety, there was no stopping this mother turtle’s biological need to finish what she’d begun. After all that work digging the deep nest and laying the eggs, she meticulously filled in the now empty nest and packed down the sand like a pro.

Watch her at work in our video, below. 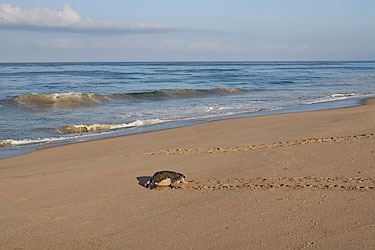 Her hard work done, it was time for this female turtle to head home.

Watch the female turtle’s return to the sea in our video, below.

Not only did we get a very rare sighting of a turtle laying eggs on the beach in the morning, but there was another turtle treat in store for us that evening. Two protected nests full of eggs were hatching and we helped the hotel’s resident biologist dig them up and release the incredibly tiny and fragile-looking hatchlings into the ocean. 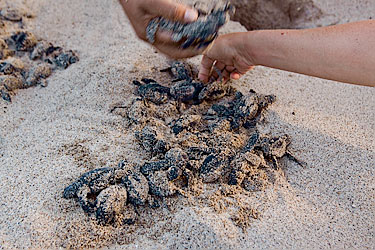 We dug out almost 200 hatchlings from two nests of eggs which had been laid 49 days earlier. 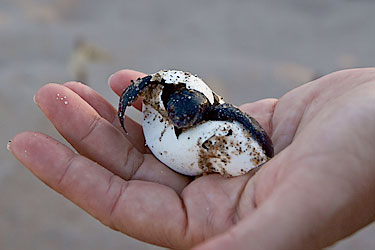 Karen holds a hatchling that hasn’t quite made it out of its shell yet. 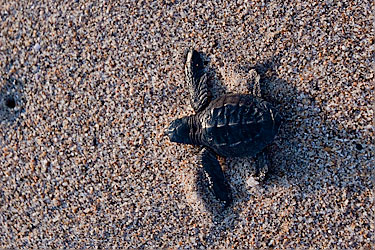 Just 10 minutes after being dug out of the nest this guy (or girl) was ready to go. 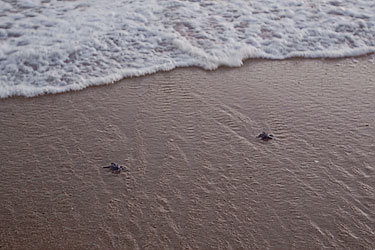 Off to sea, hopefully to return in 20 or so years to this same beach to lay more eggs.