Most airport hotels are generic at best and filthy, rundown, and sketchy at worst. We’re here to tell you about an airport hotel that’s cool enough to be a destination in and of itself: the TWA Hotel at John F. Kennedy Airport in New York City.

The TWA terminal at JFK, which was used by the airline from 1962 to 2001, was a modern marvel designed by architect Eero Saaranen. Dubbed the Flight Center, the structure featured vaulted interior spaces that seem to support themselves and a roofline inspired by wings. The design, which was completed in 1962, embodies classic 1960s style and the structure was given landmark protection by New York City in 1994.

In 2017, the terminal was repurposed as part of the TWA Hotel where guests can expect a loving restoration, runway views from bed, a 10,000 square foot hotel gym, cocktails in a vintage aircraft, and much more. It all adds up to a worthy stay even if you’re not flying anywhere. Here are our favorite shots from inside the TWA Hotel.

The entrance to the TWA Hotel is in the landmarked TWA Flight Center designed by Eero Saarinen and completed in 1962. 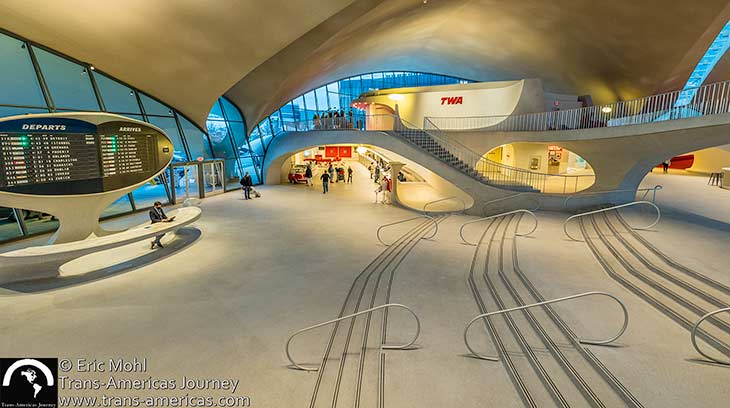 Eero Saarinen’s modernist design for the TWA Terminal created a vast soaring space without the use of a single support column. 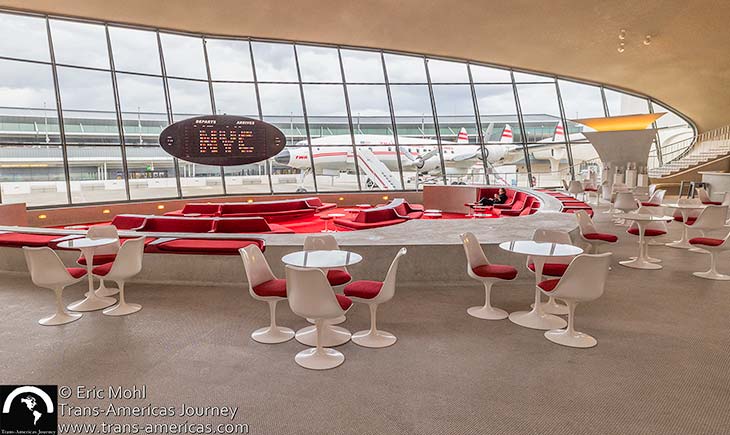 The restored Sunken Lounge used to look out onto the gates and runway of JFK, but now that view is blocked by JetBlue’s Terminal 5. 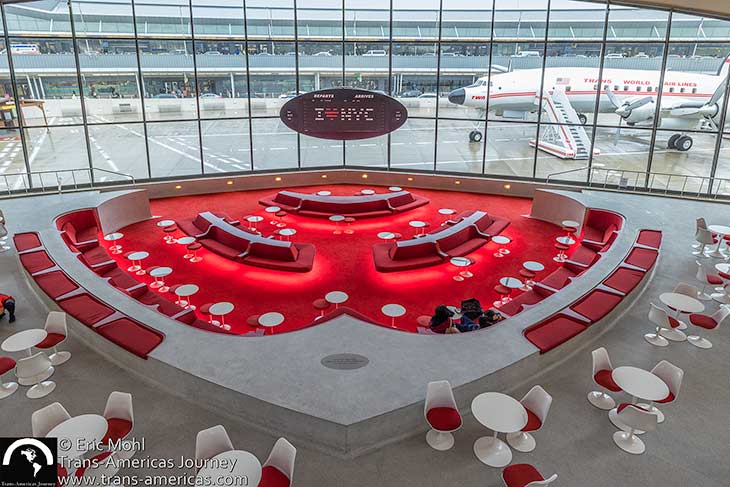 From the Sunken Lounge you can see a grounded 1956 Lockheed Constellation (or “Connie” for short) that is now the hotel’s Connie Cocktail Lounge. 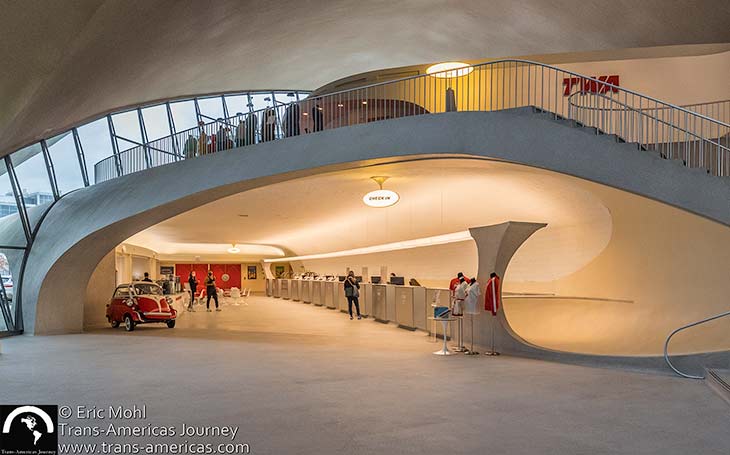 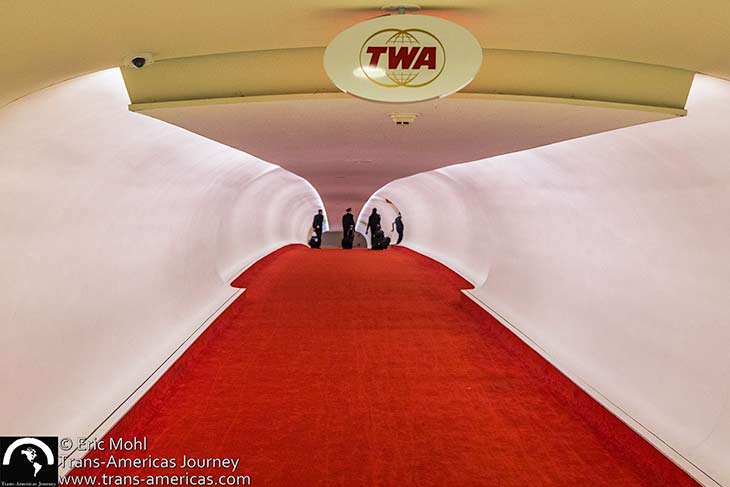 These “Flight Tubes” are the original passageways that connected the TWA terminal to the gates. This was one of the first jetway designs that provided an enclosed conection from the terminal to the plane. The tubes now connect the hotel’s historic building to the new buildings that contain the rooms. This passageway also connects directly to JetBlue’s Terminal 5. You may recall seeing Leonardo DiCaprio walking down this passageway or inside other areas of the building in scenes from the 2002 movie, Catch Me If You Can. 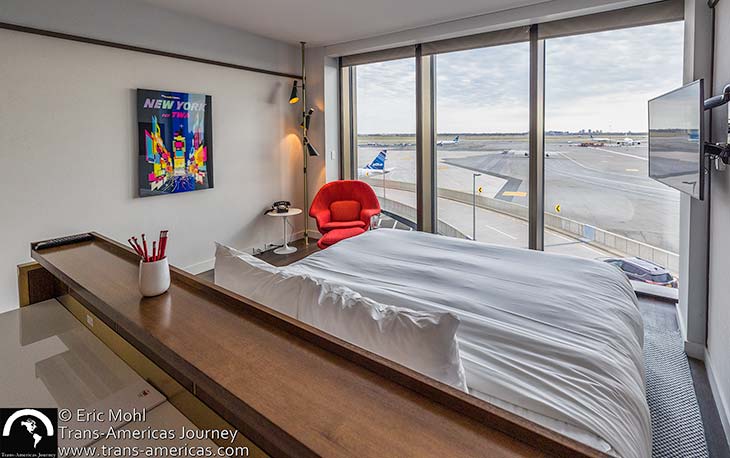 The TWA Hotel has 510 rooms in two new wings that connect to the historic terminal building. Book a runway view room in the Howard Hughes wing for a very unique perspective on the comings and goings at JetBlue’s Terminal 5 and International Terminal 4 at JFK Airport. 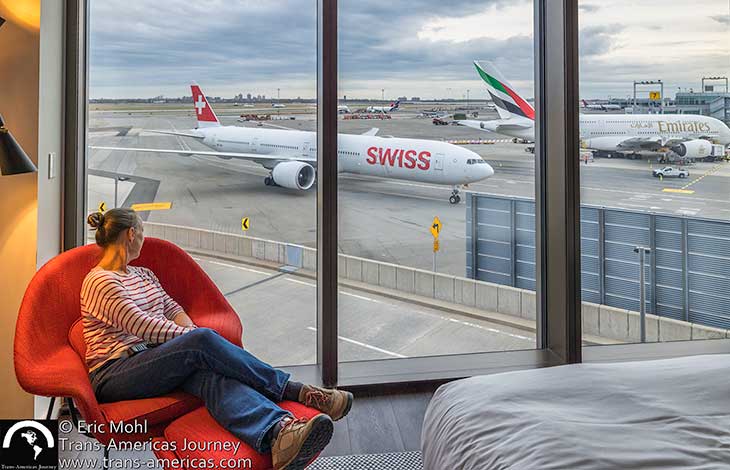 Karen in our room at the TWA Hotel watching the action at the International Terminal 4 and runway 4L/22R (in the background) including a Swiss Air Boeing 777 and an Emirates A380 which is the world’s largest passenger aircraft. 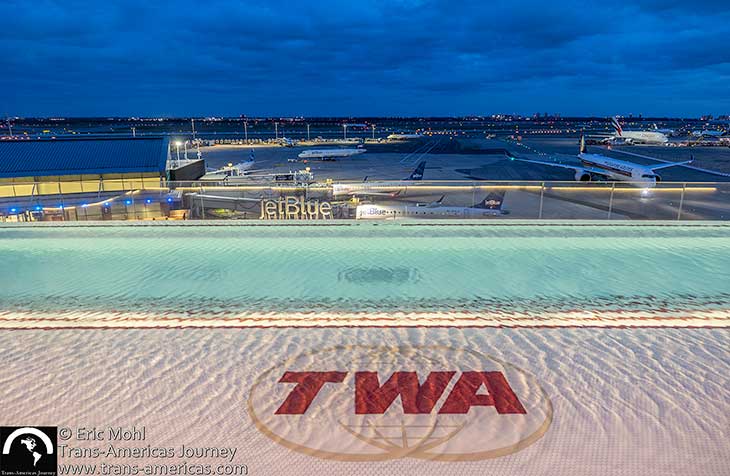 The heated rooftop pool at the TWA Hotel also offers an amazing overview of the movement of aircraft on the runway and gates of JFK Airport. Non-guests can buy a day pass that includes use of the pool.

The rear of the TWA Hotel with the Connie Cocktail Lounge and the Howard Hughes wing of rooms on the left. 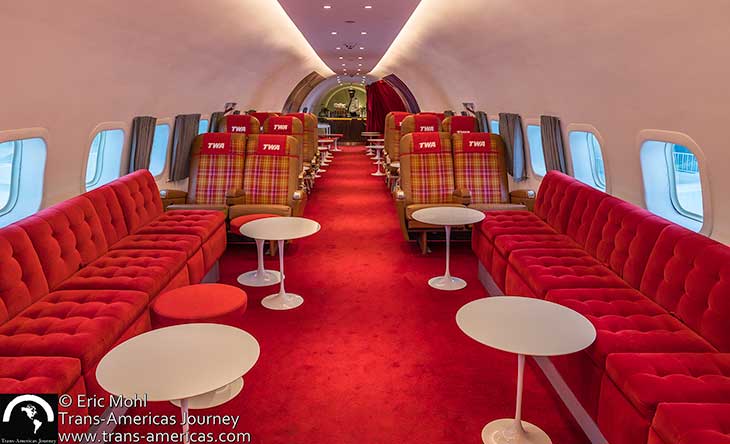 Inside the Connie Cocktail Lounge at the TWA Hotel, where the drinks have names like Vodka is My Co-Pilot and Eero Dynamics. This 1958 Constellation (aka Connie) Starliner L is a descendent of the original Lockheed Constellation that Howard Huges and TWA used to shatter the transcontinental speed record in 1946. 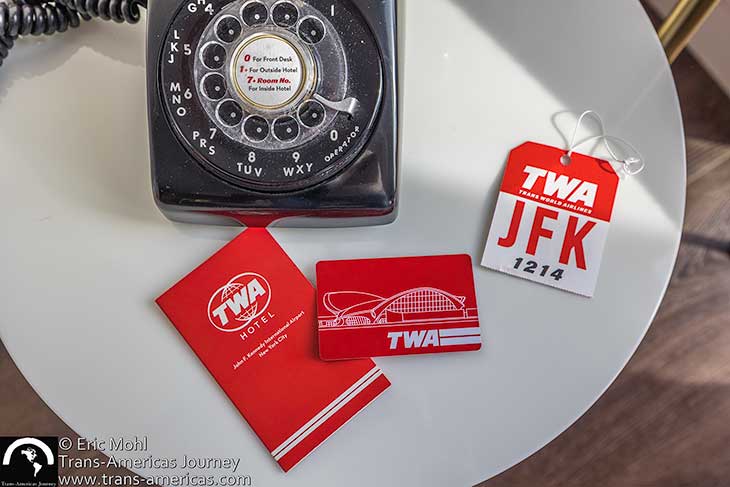 Every detail of the TWA Hotel is infused with a cheeky, fun, retro aesthetic. 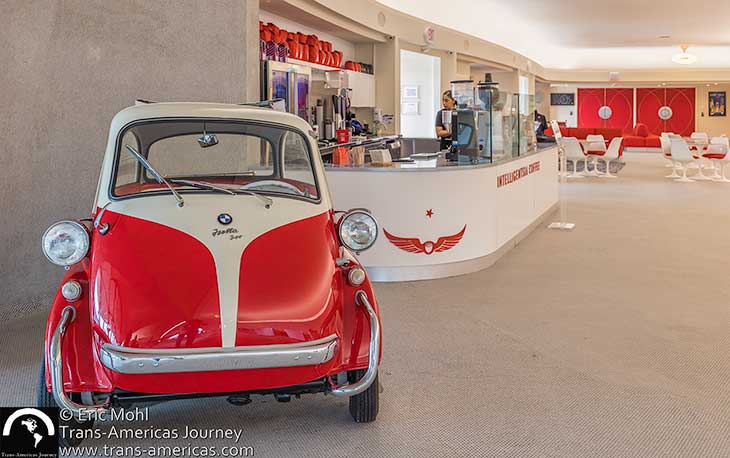 A 1956 BMW Isetta 300 in front of the Intelligentsia Coffee Bar near the check-in counter of the TWA Hotel. 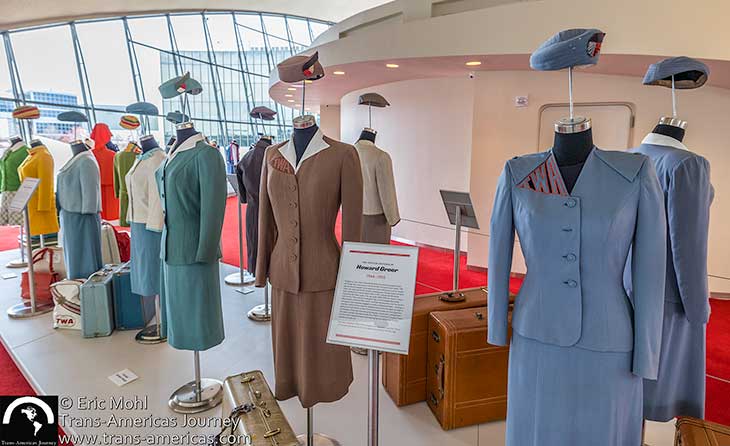 There’s a lot of history inside the TWA Hotel including a collection of 37 TWA uniforms from 1945 to 2001. 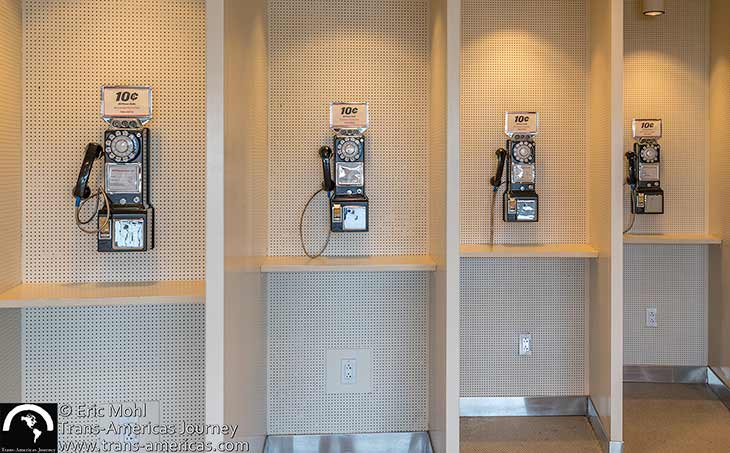 Signs on this bank of period public phones in the lobby of the TWA Hotel may say “All calls 10¢” but they also say “Out of change? Try your luck.” (Actually, all calls are free.) 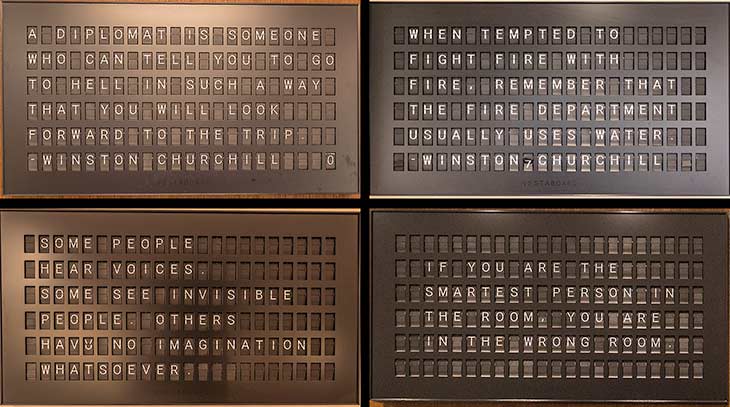 The TWA Hotel lobby is home to original arrival and departure boards called Solari boards. There are other clacking, flipping Solari boards located throughout the hotel including some that are programmed to display notable quotes instead of flight numbers. 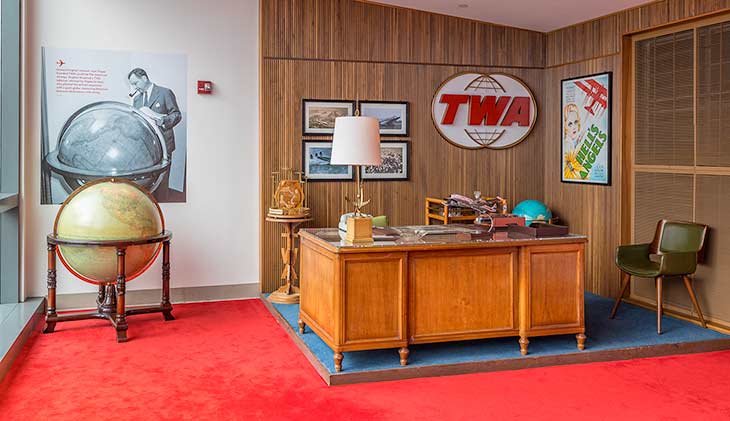 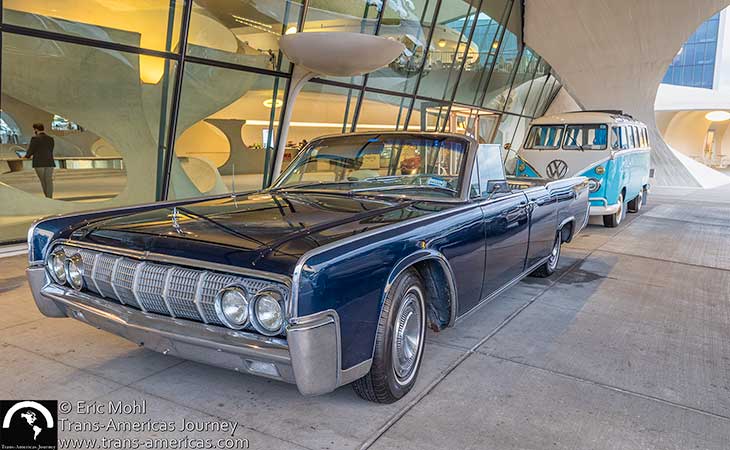 Period cars, including this 1962 Lincoln Continental (from the same year the TWA terminal opened) and a rare VW 23-window Micro Bus are parked in front of the TWA Hotel. 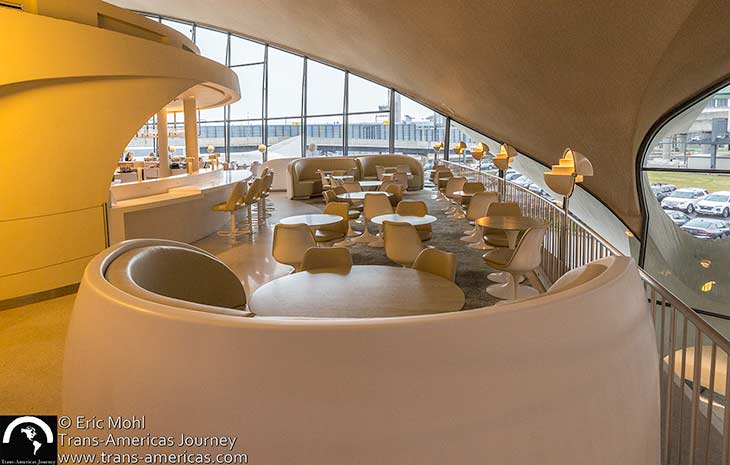 The terminal’s original Paris Café has been reborn as a Jean-Georges Vongerichten restaurant under the same name. 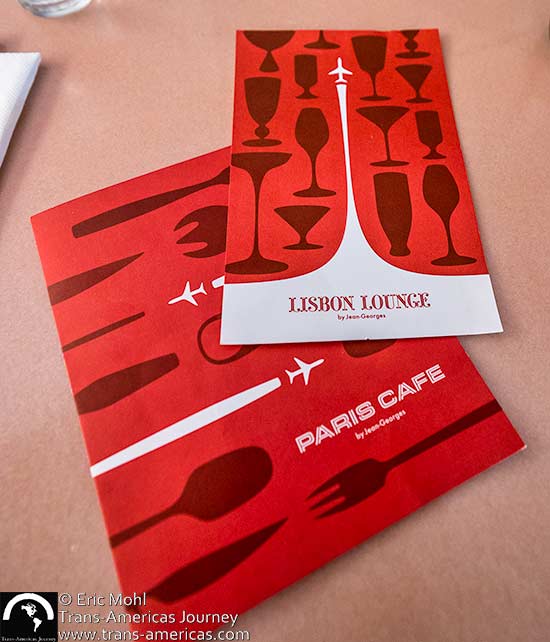 The menus in the Paris Café and Lisbon Lounge faithfully maintain the hotel’s retro theme.

Thankfully, the food at the Paris Café is thoroughly modern.

A time machine? Or simply the elevator that connects the TWA Hotel to the JetBlue terminal inside John F. Kennedy Airport.

Bonus: if you’re flying out of JFK on JetBlue (as we were recently on our way to Ecuador which JetBlue services well including direct flights between JFK and Guayaquil), the TWA Hotel is directly connected to Terminal 5, home of JetBlue. In fact, the famously whimsical moderately priced airline known for providing the most legroom in coach class, briefly used the old TWA terminal as its own terminal before quickly outgrowing the space.