Uyuni town is an overpriced and uninspired place with more than a bit of Mad Max (the original) to it. It’s also the base camp for explorations of the surrounding Salar de Uyuni salt flat, so, if you want to see Bolivia’s top tourist destination, odds are you’ll have to spend at least a little bit of time in Uyuni town. Here’s how to make the best of it.

Quinoa fields along the high-altitude road to Uyuni town in Bolivia.

The 180 mile (290 km) drive from Oruro to Calchani (the village on edge of the Salar de Uyuni salt flat located 12 miles/20 km before you reach Uyuni town) takes about four hours. The straight, flat, and well-paved road takes you through gorgeous scenery including high plains, sand dunes, multi-hued hills and rocks (caused by mineral deposits), and small herds of wild vicuña.

We visited the Uyuni Salt Flat in Bolivia twice. During our first visit, the new highway had all new signs and Eric added a Trans-Americas Journey sticker to one of them (left). By our second visit 20 months later, that same sign was almost covered in stickers.

Another notable element of this stunning drive is that it takes place at altitudes between 12,000 feet (3,657 meters) and 15,000 feet (4,572 meters) which is all higher than just about anywhere you can drive in North America. Along the way, you’ll also pass two signed viewpoints located on low hills just off the main road. It’s worth stopping at these viewpoints to take in your surroundings and stretch your legs or have lunch (there are two picnic tables at each viewpoint and the one closest to Calchani also has a BBQ pit). 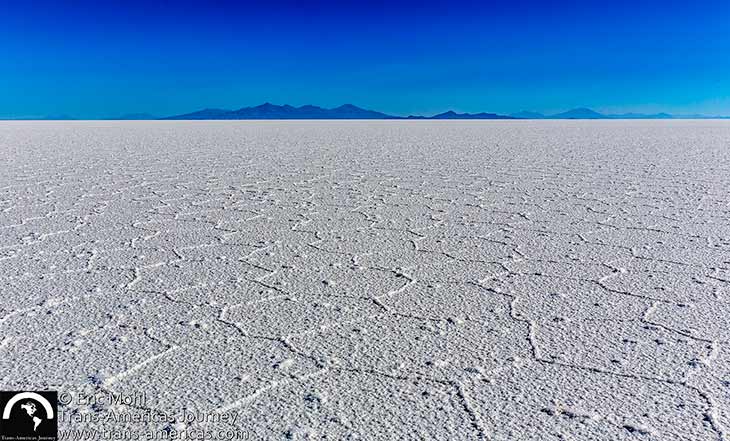 The natural patterns on the Uyuni Salt Flat look like fancy floor tiles.

As we reached the town of Calchani, the world’s largest salt flat suddenly appeared. Though we’d been driving toward it for hours on a straight road, our view of the world’s largest salt flat had been obscured by mountains. When we realized we were finally upon it, it felt like someone had flipped a switch lifting a curtain that had been keeping that vast whiteness hidden. It was a breathtaking surprise. 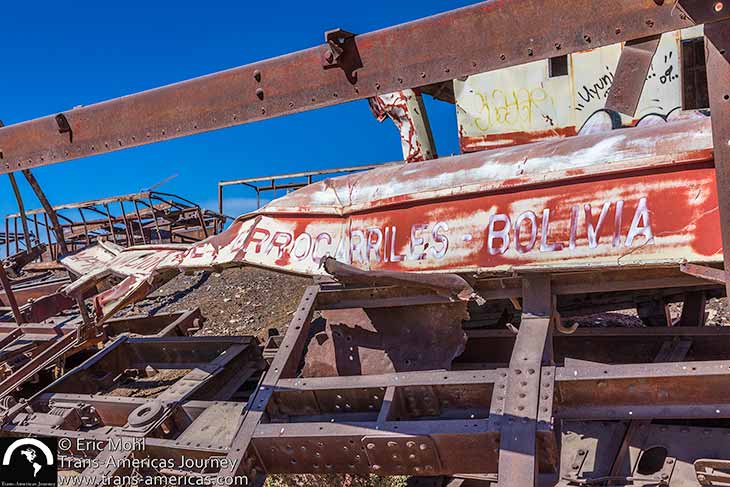 Mangled cars and engines at the Train Cemetery near Uyuni town.

What to do in Uyuni town

Exploring the largest salt flat in the world is obviously the big draw, but there are a few other things to do while you’re in and around Uyuni town. 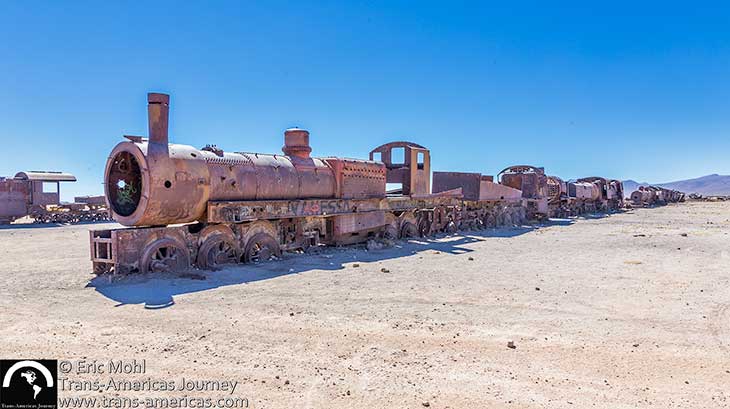 A locomotive to nowhere in the Train Cemetery near Uyuni town.

In the 19th century, Uyuni town was a train transit hub for a new rail system. Plans were made. Rolling stock was imported from England. And the resulting rail network transported tin and other mined goods from Bolivia to a Chilean port on the Pacific Ocean. But by the early 20th century, the bottom fell out of Bolivia’s mining industry and the rail network fell apart. 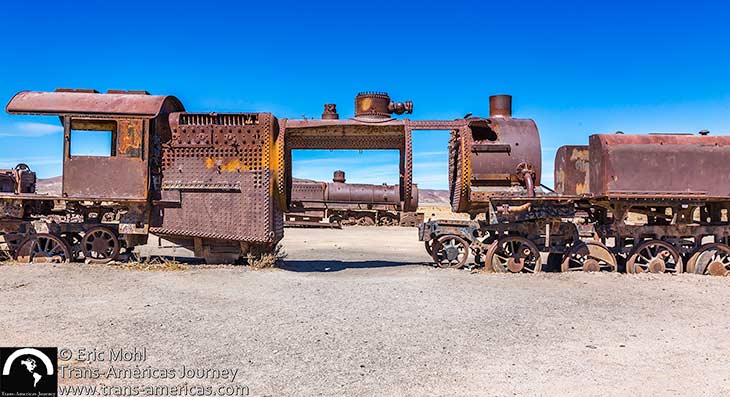 Time and the elements have turned rolling stock into art at the Train Cemetery near Uyuni town.

Since then the rolling stock has also been slowly falling apart at the Cementerio de Trenes (Train Cemetery). Located on the edge of town, this is where dozens of train cars and locomotives are slowly being eaten away by high winds, strong sun, and the corrosive effects of the salty conditions in Uyuni–not to mention thieves who have stripped the cars and graffiti artists who have tagged them. The result is a kind of apocalyptic outdoor sculpture park which is fascinating even if you’re not a train buff. 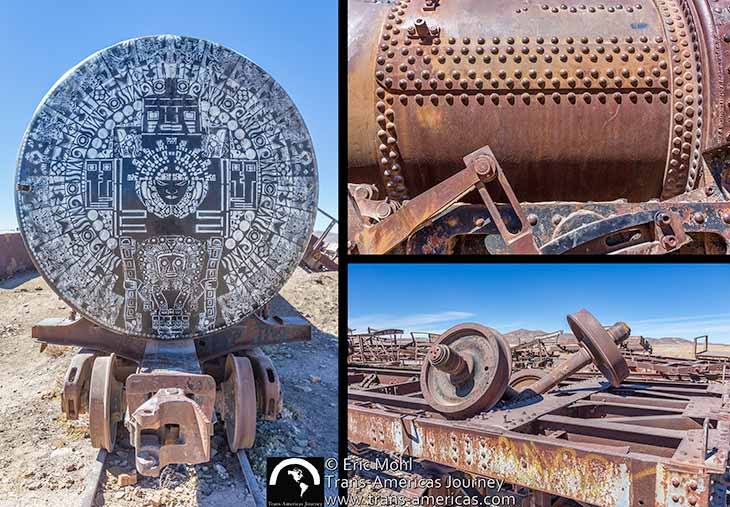 You can find beauty in the details at the Train Cemetery.

You can book a guided tour of the Train Cemetery (and many organized group tours of the Salar de Uyuni salt flat include a stop at the Train Cemetery), or just walk there yourself and explore (it’s about 2 miles/3 km from town). Be warned that the area is surrounded by an informal garbage dumping area that’s full of flapping plastic bags and scavenging dogs. Also, much of the rolling stock is so rusted out that it’s not necessarily safe to go inside the cars or climb on top of them. Proceed with caution. 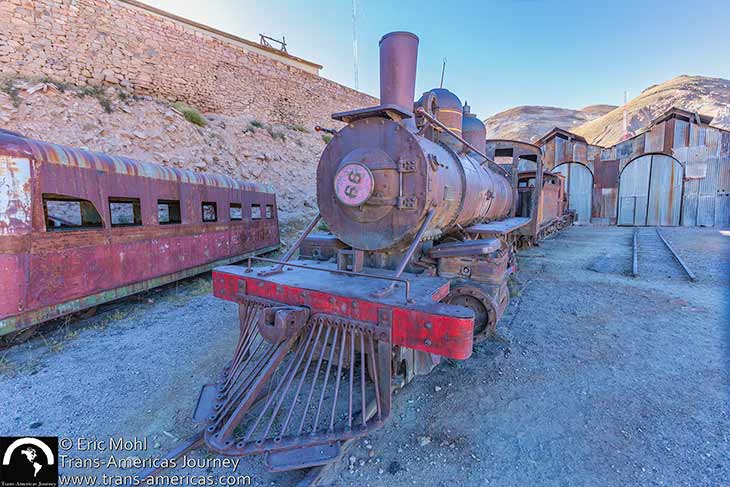 A plaque on this locomotive in Pulcayo reads: Rogers Locomotive Company, Patterson, NJ, No. 5544. Our truck, parked just a few feet away, was purchased at a Chevy dealership in the town next to where this train was made.

About 12 miles (20 km) from Uyuni town on the highway to Sucre you’ll find Pulacayo. In the late 19th century this town and the area around it formed an important first leap toward industrialization and mining wealth in Bolivia. Pulcayo had the country’s first railroad, its first alpaca fiber spinning mill, and its first steam engines. Spanish conquistadors worked rich silver mines in this area until 1770 when local Indigenous groups drove them out. 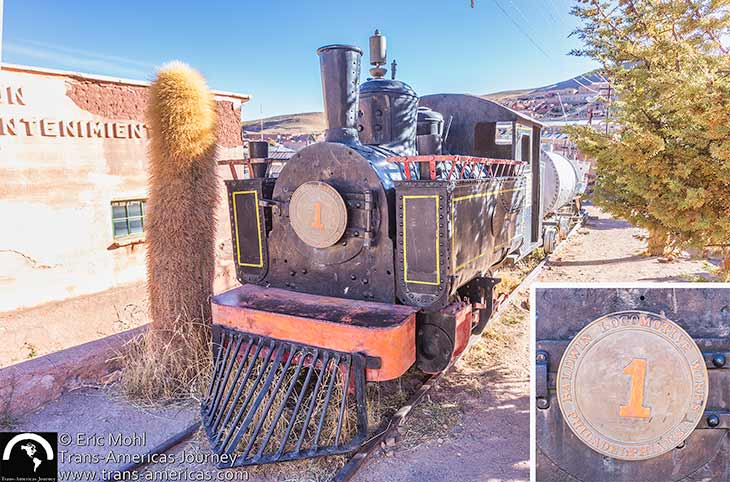 This locomotive, from the Baldwin Locomotive Works in Philadelphia, PA, was the first locomotive in Bolivia. It arrived in 1890 and ran from the mine near Pulcayo to the port of Antofagasta in Chile.

The locals managed to keep their silver a secret for more than 60 years before mining resumed in 1833. The mines (and to a large extent, the town) were abandoned in 1952. Though there are a few people still living in Pulcayo, visiting this place is like visiting a ghost town. 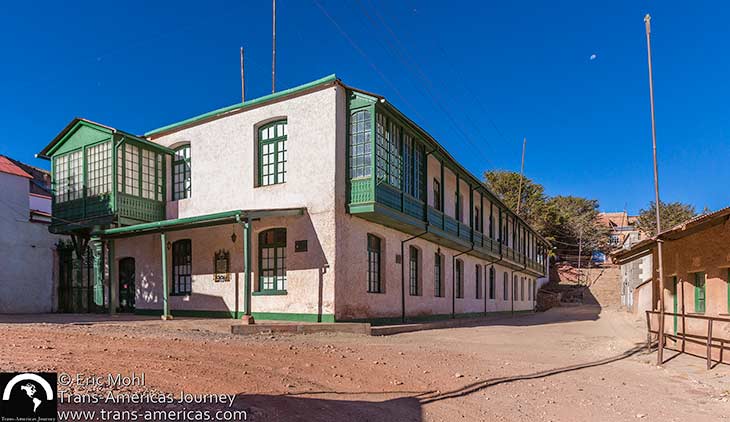 This is the mansion built by Aniceto Arce, mining magnate and former president of Bolivia.

While you’re there, check out the remains of a mansion owned by mining magnate and former president of Bolivia Aniceto Arce. You can also see a train that was robbed by Butch Cassidy and the Sundance Kid (holes in its wooden cars are said to have been made by bullets during a gun battle that went along with the robbery). In 2003, local government leaders submitted this area and its history to UNESCO for consideration as a World Heritage Site.

Where to eat in Uyuni town

Not much stood out to us in terms of eating and drinking in Uyuni except for Minuteman Revolutionary Pizza. Located inside the Tonito Hotel, this place is run by its gregarious North American creator who brings passion and professionalism to the place. Tasty pizzas with traditional and creative toppings come to the table piping hot along with cold Bolivian craft beers and a range of Bolivian wines (don’t knock it ’til you try it–Bolivia is producing some good wines). This place is only open at night and is usually quite busy so making a reservation is a good idea.

Where to sleep in Uyuni town

A decent budget hotel in Uyuni (that isn’t a dorm room) KW Hotel where 280BS (about US$40) got us a small (but clean) private double room with a private bathroom, breakfast, and decent Wi-Fi.  One design note: very thick white spackle on the walls and ceiling made our room look like it was made of whipped cream. And, yes, a $40 room is in the budget range in Uyuni (we told you things were overpriced).

At Hostal Magia de Uyuni we got a fairly clean private double room with a private bathroom, heating at night, parking, and breakfast for 350BS (about US$50, though we were quoted US$70 at this hotel the second time we visited Uyuni). 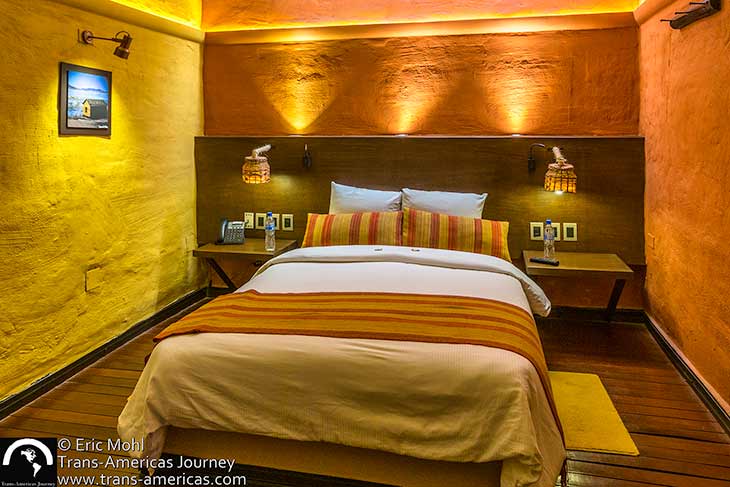 Our room at Hotel Jardines de Uyuni in Uyuni town.

Worth the splurge is the tranquil Hotel Jardines de Uyuni where our private double room had a private bathroom (though it was so tiny that it was impossible to turn around in the shower) with good heating, electric blankets, tea service all day, a TV with cable, a desk, use of the heated pool and sauna, good Wi-Fi (a rare find in Uyuni), and breakfast for 650BS (about US$95). Note that rooms face a central courtyard and do not have windows to the outside. 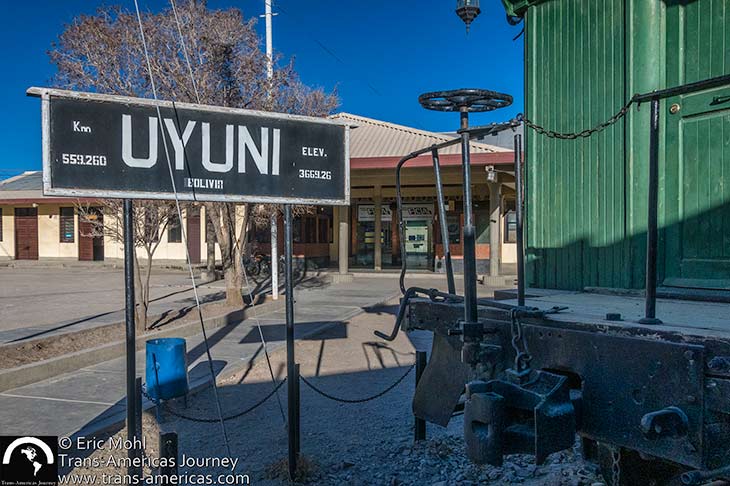 The train station in Uyuni town is now home to the Onkel Inn Wagon Sleepbox where this green car has been converted into one of its unusual rooms.

The most unusual accommodation option in Uyuni is the Onkel Inn Wagon Sleepbox at the train station near the center of town. Here, rail cars have been turned into accommodations ranging from tiny berths for one person with a shared bathroom to a full private rail car suite.

Whatever accommodations you choose, make sure there’s a heat source for your room. At 11,995 feet (3,656 meters) it gets cold in Uyuni town at night year-round. 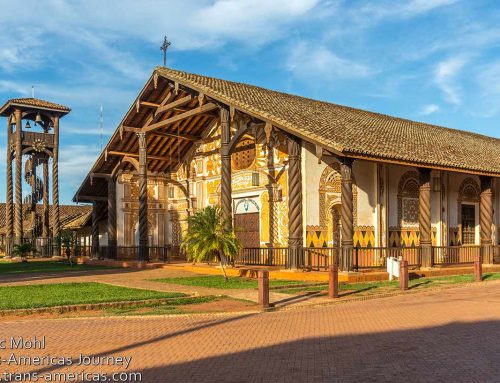 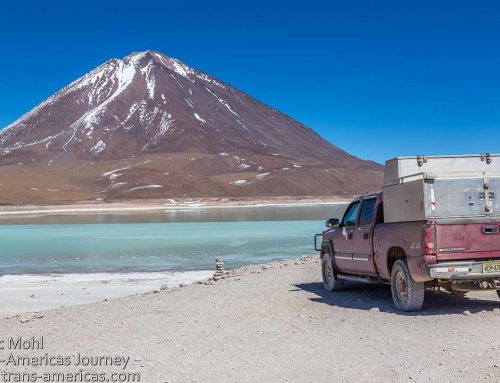 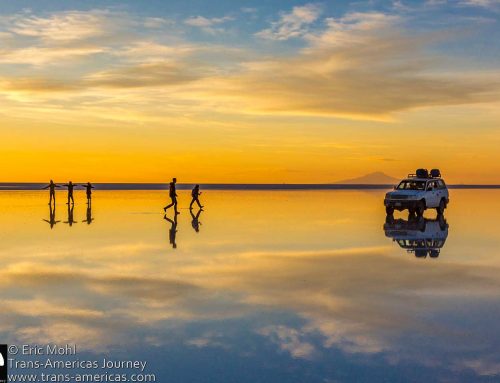 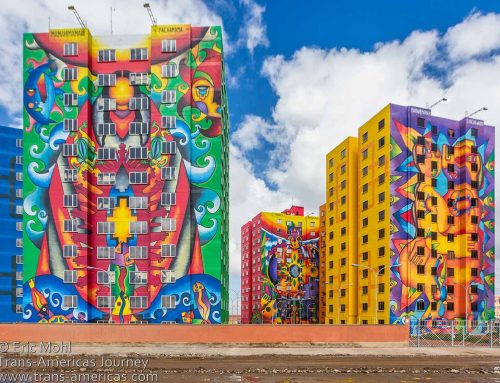 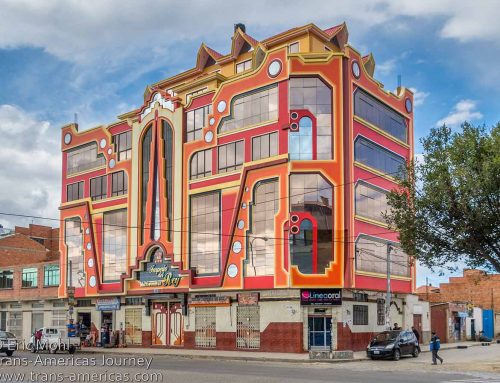 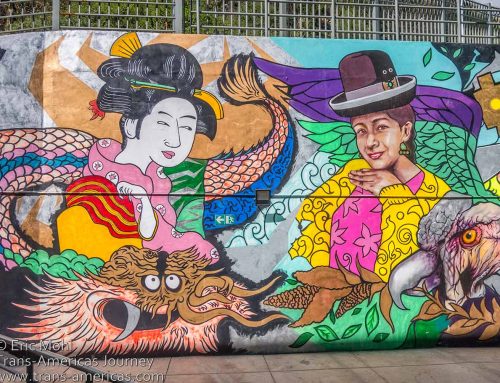 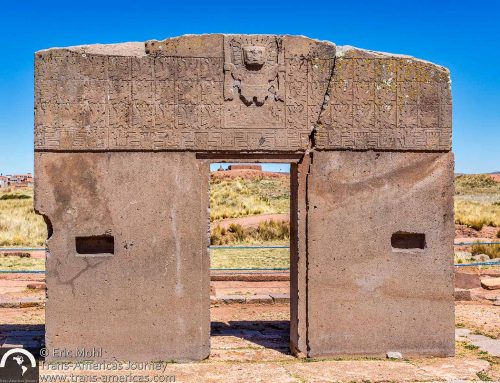 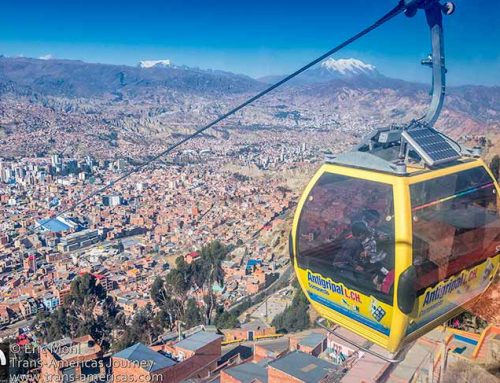 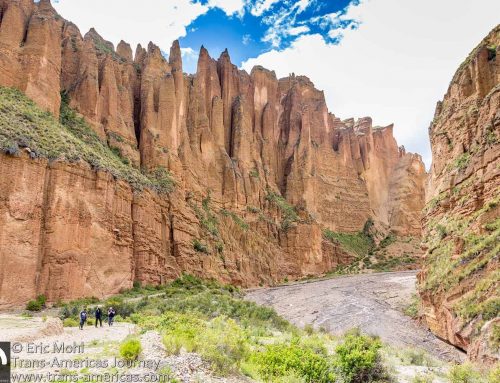 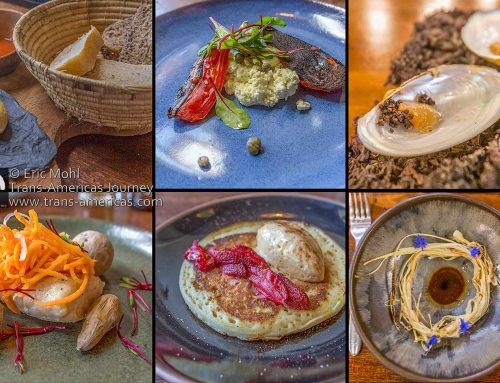 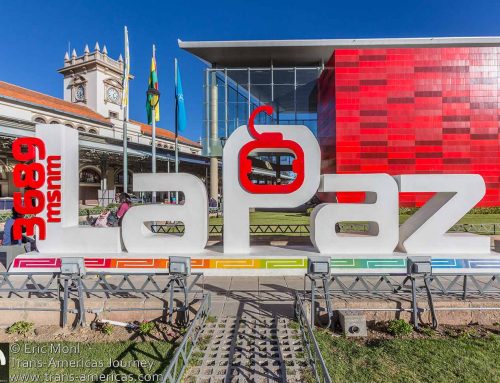 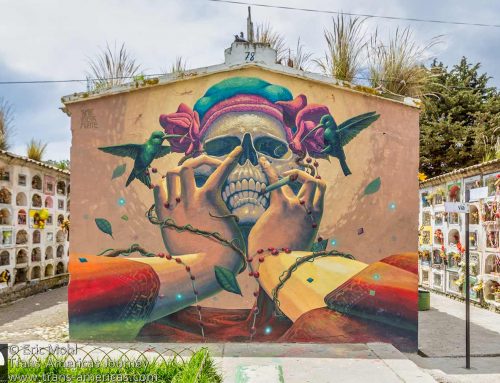 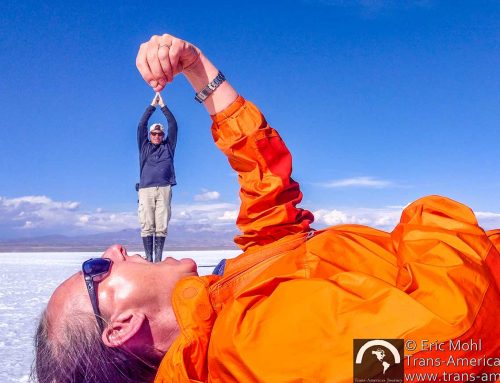 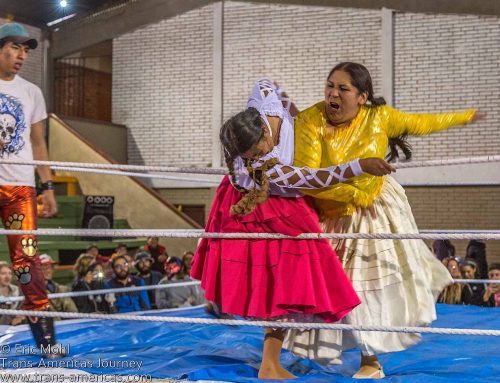