From Volcano to Vase: The Long Journey of Your Valentine’s Day Roses – Ecuador

Valentine’s Day approaches, bringing with it the requisite red and pink overload, heart-shaped silliness, and sudden craving for roses (do NOT believe anyone who assures you that they don’t want a dozen right about now). Colombia is the biggest exporter of cut flowers to the US but Ecuador isn’t doing too bad either with US$166 million in cut flowers exported to the US in 2012. Many of those flowers are the Valentine’s Day roses you are being mercilessly pressured to buy or receive this February 14.

Here’s what we learned during a behind-the-scenes tour of a major rose producer on Ecuador’s “Avenue of the Volcanoes” sandwiched between three giants: Chimborazo Volcano (20,703 feet/6,310 meters), Cotopaxi Volcano (19,348 feet/5,900 meters) and Tungurahua Volcano (16,480 feet/5,023 meters). Those last two volcanoes, by the way, are currently erupting. 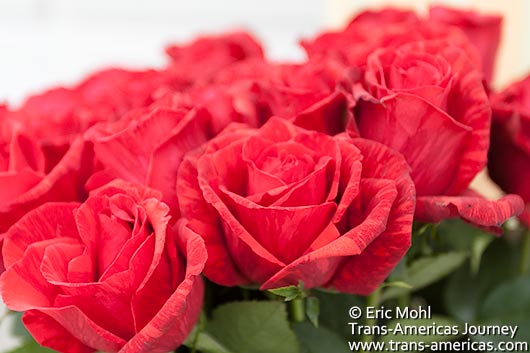 Inside Nevado Roses in Ecuador

On a normal day Nevado Roses ships 75,000 stems. The frantic build up to Valentine’s Day starts 65 days before February 14 during which time staff is tripled, plants are “pinched” to increase output and Nevado Roses ultimately manages to ship three times their usual number of daily blooms to meet demand. That’s 225,000 roses. PER DAY. And Nevado is just one of dozens of rose farms in Ecuador. 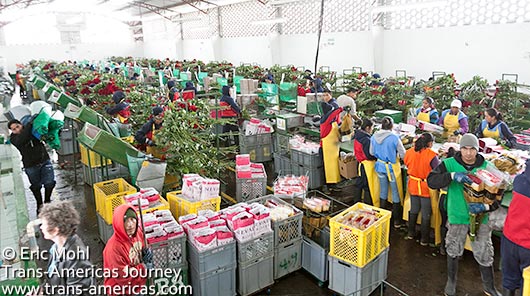 Workers on the processing floor of Nevado Roses in Ecuador keep up a frantic pace to stay on top of demand for Valentine’s Day roses, shipping more than 200,000 per day in the lead up to February 14. 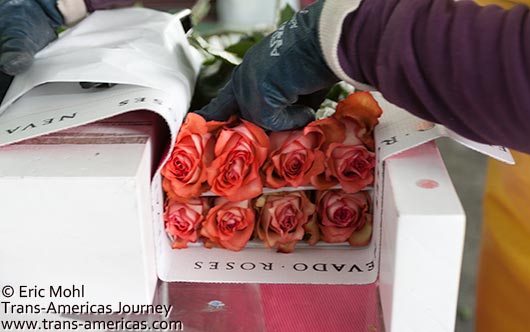 It’s mostly female employees that handle the final processing and packing of blooms at Nevado Roses because they’re more gentle than their male counterparts.

These specially-bred roses grown at Nevado come in white, red, yellow,hot pink, pale pink, almost green and combinations thereof and have names like Gigi, Red Intuition, Fragrant Delicious and Pink Intuition. Then there is the small room where white roses have their stems spliced and placed into tiny pots of dye to produce a weird, fakey technicolor “tinted” rose that’s not our cup of tea, but whatev. 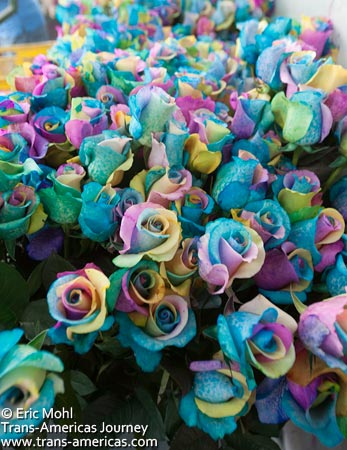 Okay, “tinted roses” are not our cup of tea but there is a market for these white roses which are placed in small pots of dye to create results like these. 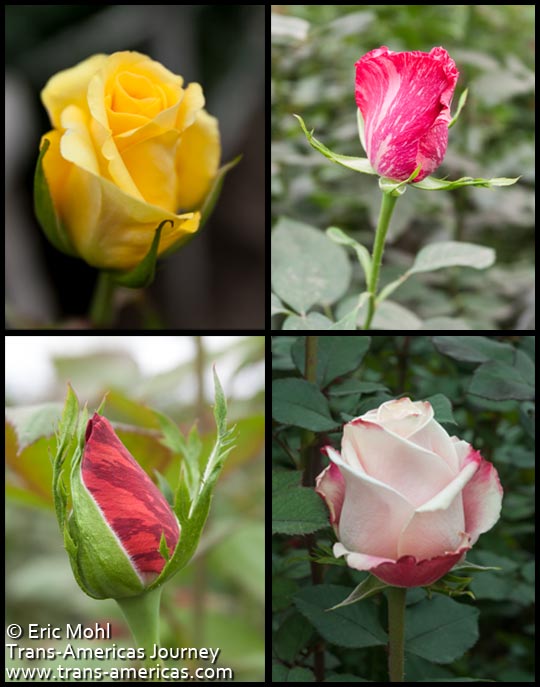 Just four of the many varieties of roses grown at Nevado Roses in Ecuador.

Nevado Roses greenhouses in the sky

Nevado Roses, which has been family owned since it was created in 1965, produces blooms on more than 170 acres (70 hectares) which is covered in long greenhouses which protect and nurture thousands of rose bushes. 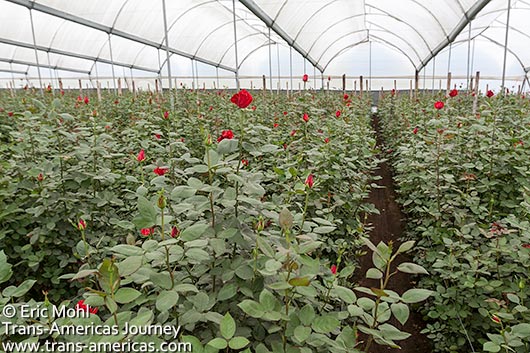 There are more than 70 massive, rose-filled greenhouses like this on the Nevado Roses farm in Ecuador.

Nevado means snow in Spanish and you can see plenty of that from the farm (on a clear day) as you look up to the flanks of the Chimborazo Volcano behind the massive sprawl of greenhouses. The snowy peak of that volcano is at 20,703 feet (6,310 meters) and the roses themselves are grown at more than 9,042 feet (2,756 meters) above sea level.

That may seem way too high for growing roses but the Nevado operation is also very, very close to the equator where temperatures stay warm enough for growth (especially inside the greenhouses). The equatorial location has other benefits as well. 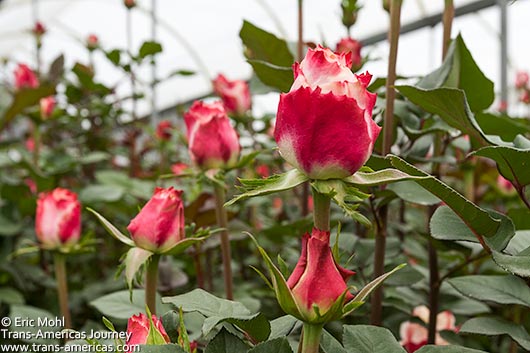 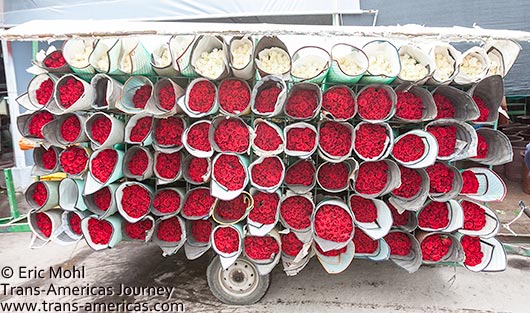 Exquisite roses on the equator

The sun in Ecuador is strong, constant for basically 12 hours a day and comes down in super straight rays nearly perpendicular to the earth. Solar panels, which are angled to catch slanted rays in most of the world, lie practically flat down here around the equator.

These unique sun conditions are said to produce more vibrant color, a larger flower head and some of the longest, straightest stems in the world, some reaching more than 40 inches (100 cm). 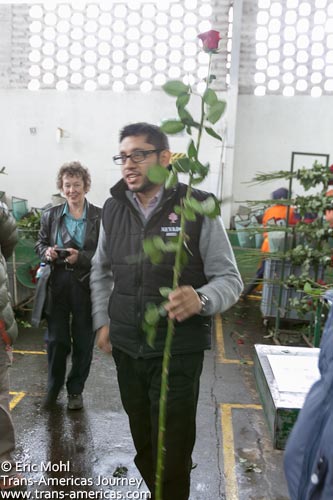 The equatorial sun is said to produce some of the longest rose stems in the world. At Nevado Roses stems are sometimes taller than you are.

Average Nevado Roses stem lengthy is 15 inches (40 cm), but some buyers like them longer. The Russians, for example, are big buyers of Ecuadorian roses and they like their stems super tall, preferring stems that are 35 inches (89 cm) or longer. Yes, that’s a nearly three foot (one meter) long stem. 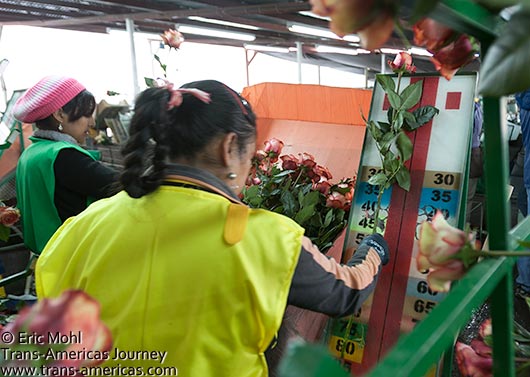 Workers at Nevado Roses in Ecuador sort roses by stem length which ranges from 15 inches to more than three feet. 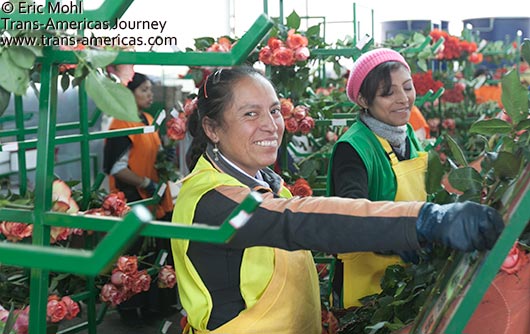 Workers at Nevado Roses in Ecuador sort roses by stem length which ranges from 15 inches to more than three feet.

Stop and smell the controversy

Roses are not immune to politics. Since August of 2013 Ecuador pays nearly 7% duty on the roses it sends to the US after the current government of Ecuador backed out of a duty-free flowers deal with the US in protest over the Edward Snowden affair (Ecuador was one of the nations that offered Snowden asylum).

There are additional rose controversies too, mainly to do with chemical use and worker conditions as nicely laid out in this article about Ecuadorian rose production in Mother Jones magazine. At Nevado Roses they’re proud of their certifications from environmental orgs including Rainforest Alliance and since 2006 workers at Nevado have had a medical facility on the farm offering free treatment.

For more reasons to think twice before ordering that bouquet, check out our post about the complicated environmental and border issues associated with the xate ferns that are often used as filler behind the flowers. 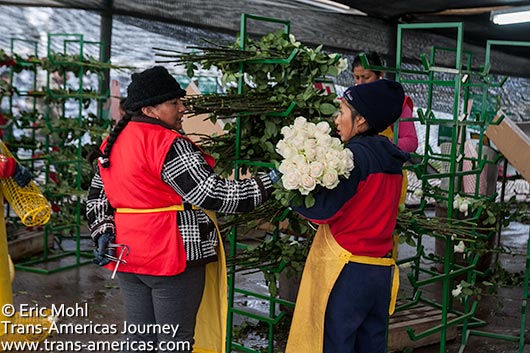 Valentine’s Day means demand for blooms from Nevado Roses triples from 75,000 stems a day to more than 200,000. 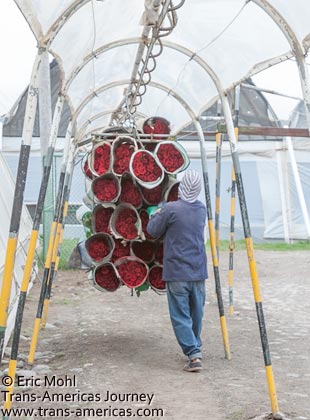 A worker pushes a heavy load of romance at Nevado Roses in Ecuador. 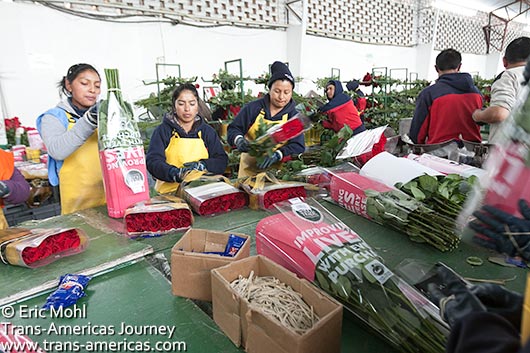 It’s all hands on deck at Nevado Roses to meet Valentine’s Day demand for their blooms.

How to make your roses last

Though Nevado Roses sells their roses for about 50 cents per stem on the wholesale market you, no doubt, will pay much, much, much more. Here’s what Nevado Roses experts told us about how to make your roses last.

1. cut the stems neatly at a steep angle

2. put them in cold, clear, clean water and change the water frequently

3. add flower food – dumping that mystery packet that comes with many bouquets or can be purchased (cheaply) into the vase before adding water may add 5-6 days of life to your flowers 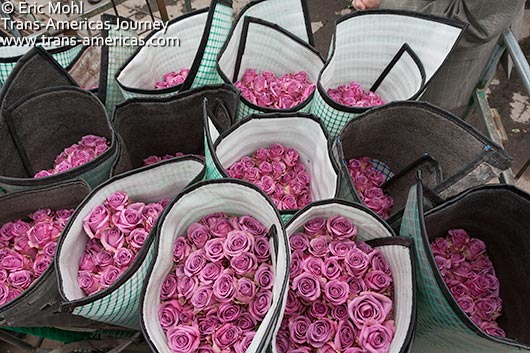 Lavender roses after being sorted by stem length. 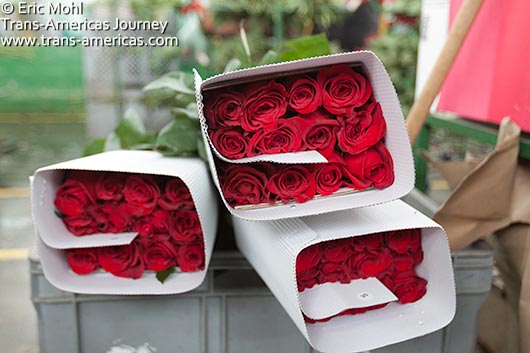 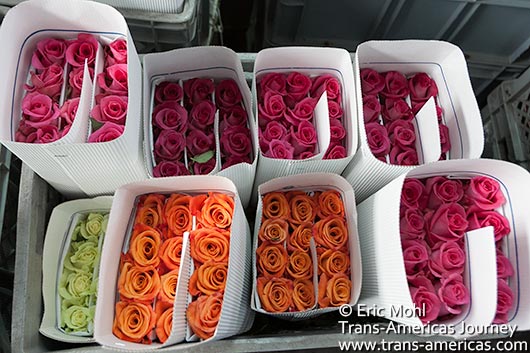 So, what flowers to women in Ecuador want?

Not roses. A female Nevado Roses employee, one of more than 500 full-time employees on the farm, told me that in Ecuador women crave sunflowers and orchids, not roses. 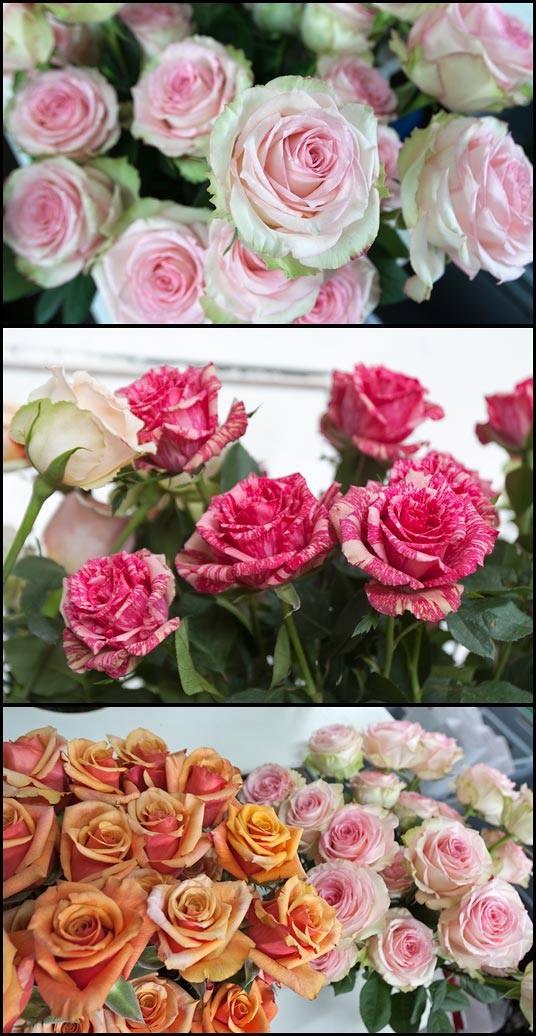 We visited Nevado Roses during a day excursion that was part of our trip on Ecuador’s new Tren Crucero four day/three night trip through the country. Individual visitors can pre-arrange a guided tour of Nevado Roses.