Sure, sure. Puerto Veracruz puts on what many consider to be the second-largest Carnaval celebration in the world (right behind Rio) which attracts travelers from around the world. And we’d love to see it. However, even without parades and half-naked women and copious drinking in the streets the city of Veracruz showed us a good time. See why in our Veracruz travel guide. 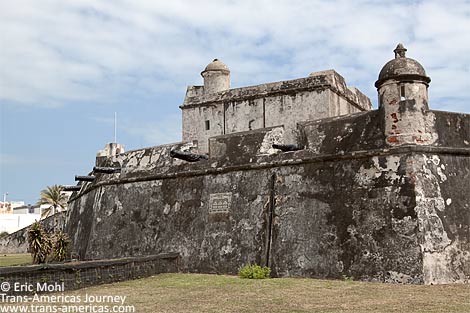 Changing coastlines have left the Baluarte de Santiago Fort in Veracruz, Mexico securely inland even though it was originally situated on the waterfront.

What to do in Veracruz, Mexico

Right off the bat, Veracruz (no one calls it Puerto Veracruz) feels extremely Caribbean. The people are darker and extremely quicker to smile. The music makes you want to swing your hips, not just stomp your feet. The clothes are a little tighter. Locals, not just travelers, sport dreadlocks.

Restaurants and bars around the Zocalo in Puerto Veracruz offer food, drink and roving bands–from mariachi to salsa.

The city’s main plaza or zocalo is quiet and peaceful by day and a bustling hub at night. Veracruz is very much a night time town and that fact, plus the number of bands of many musical styles playing on the street for anyone who’ll listen and the smattering of buildings with wrought iron balconies, made us think of our beloved New Orleans more than once. 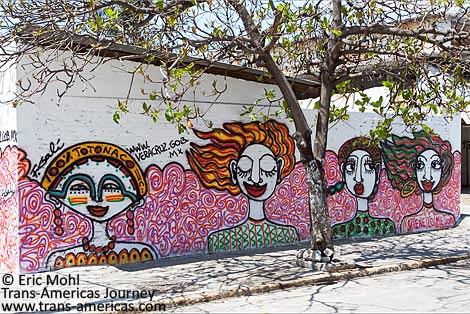 This cheerful graffiti livens up walls all around the city of Veracruz.

Art is also part of the personality of Veracruz, including a distinct style of bright, smiling street art and a large installation by Mexican artist and designer Cristina Pineda who has placed one of her Xico dogs–which she creates out of a wide range of materials and in a wide range of styles and sizes–along the malecon. She calls Xico the “mascot of Mexico” and there is something very endearing about him. 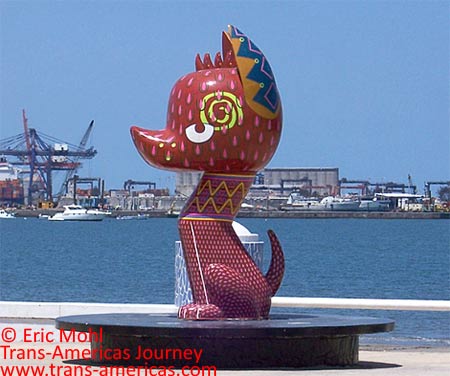 Meet Xico, a stylized dogs which have become the trademark of Mexican artist and designer Cristina Pineda.

Veracruz also has a tidy aquarium (the Acuario de Veracruz) which offers the usual: turtles, reef fish, some dolphins, plus the chance to get into a tank with a bunch of brown sharks (friendly) and tiger sharks (known to be aggressive).

There are many sharks at the Acuario de Veracruz and they’ve got a unique program that lets you get in the water with them.

Sign up for their Tiburonario (300 pesos or about US$16, including the price of general admission) and you get to borrow a wet suit, mask, and snorkel then climb into a clear acrylic cage with holes in it along with an aquarium employee. The cage is then lowered into a tank exhibit that’s full of sharks until you’re up to your waist in water–and in sharks. 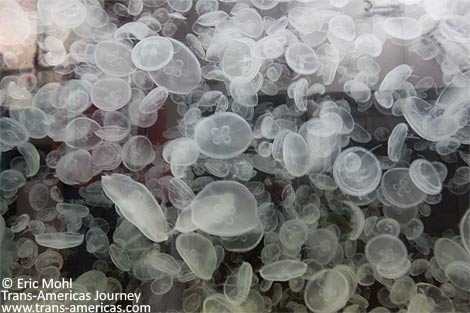 During a behind-the-scenes tour of the Acuario de Veracruz we were shown this tank absolutely brimming with baby jellyfish.

Honestly, being submerged in a closed box in the water without full SCUBA gear on was more disconcerting than being circled by sharks. It was a little weird to be watched by the rest of the aquarium patrons as well. Check out our video, below, to see what it was like and to watch sharks rip hunks of fish off sharpened acrylic feeding poles as we tried valiantly to hold onto them.

Not surprisingly, the port city of Veracruz has a lot of shipwrecks off its shores and SCUBA divers can explore many of them. We didn’t get a chance to dive while we were in town, but we did have a great conversation with local diving pioneer Gonzalo Estrada at his Tridente Diving shop right on the malecon. He’s been diving in the area for more than 50 years and he’s a wealth of information about what’s down there. 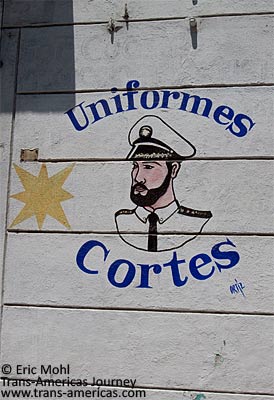 We can’t figure out why the owners of this store, which sells uniforms to members of Mexico’s navy, would name it after the notoriously brutal Spanish conquistador Hernan Cortes.

Back in the early 1500s Spanish conquistador Hernan Cortes landed at what is now Veracruz and proceeded to go about his conquistador business (primarily looking for gold and “saving” souls) in an infamously ruthless way. Therefore, it seemed strange to us that anyone in the region would invoke his name with anything but disdain. However, we came across his name and his image a number of times, including on a store that sells uniforms to  members of Mexico’s navy. 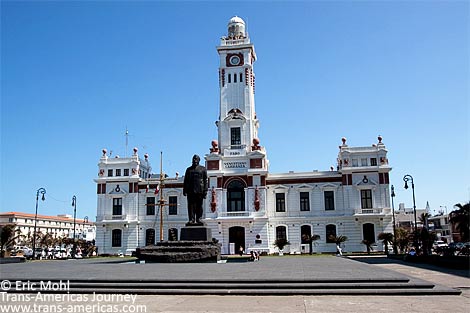 The Faro Carranza building is where Mexico’s Constitution was drafted in 1917. Today the navy uses the building.

In 1914 the United States landed in Veracruz on the orders of President Woodrow Wilson who felt slighted because the Mexican government, still not fully settled after the recent Mexican Revolution, failed to apologize for the Tampico Affair. One hundred Mexicans were killed and the US occupied the city. Fighting went on for six months, then WWI broke out and other battles took over. 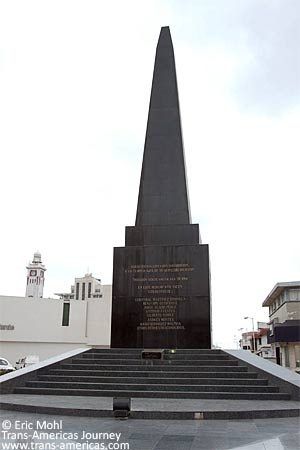 Little known fact most of us weren’t taught in history class: the United States actually invaded and occupied Veracruz in 1914. This monument stands in memory of the incident.

Where to eat in Veracruz, Mexico

Veracruz is close to the coffee-growing region of Coatepec and there are cavernous, bustling coffee shops all over town. Two of the most enticing are Gran Cafe del Portal (right next to the Hotel Diligencias) and Gran Cafe de la Parroquia. Maybe it was their great Mex Decco logo, but we were drawn to Gran Cafe de la Parroquia (along with what seemed to be all of the old men in the state). 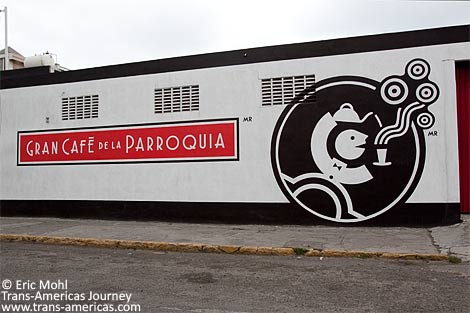 The Gran Cafe de la Parroquia serves up great coffee and even better people-watching and we loved their Mex Deco logo too.

The coffee was great and interactive: when you want milk added you bang your spoon on your cup and a water comes over with a massive tea kettle full of warm milk. Order a doble (double) if you like your coffee strong. The tile work and ornate copper coffee makers are gorgeous and you can buy coffee (ground or whole bean) to take home with you. 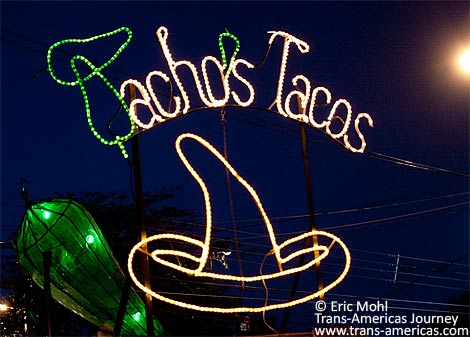 We loved the neon jalapeno pepper at this roadside taco stand in Veracruz.

Not surprisingly, fish is a major ingredient at most restaurants in Veracruz and the city is the birthplace of fish Veracruzano which is a bastardized version of a classic Spanish recipe using ingredients (tomatoes, olives, chilis) available in Mexico. 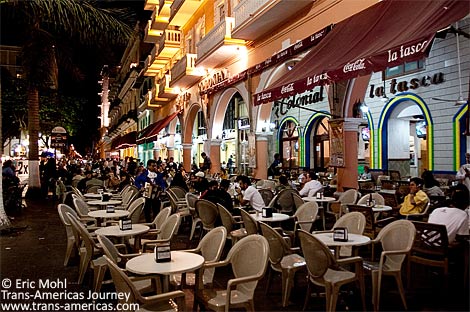 Restaurants and bars around the zocalo in Veracruz offer food, drink, and roving bands. Just heed our warning about the hidden tax.

If you choose to eat in one of the many restaurants in the zocalo, be warned that many of them don’t include tax in their menu prices, like almost every other restaurant in Mexico do, so everything ends up being more expensive than you expect.

Where to sleep in Veracruz, Mexico

The city also has some interesting hotels, including the historic Gran Hotel Diligencias which is right on the zocalo. The hotel was originally a station for stagecoaches delivering mail (diligencias in Spanish). 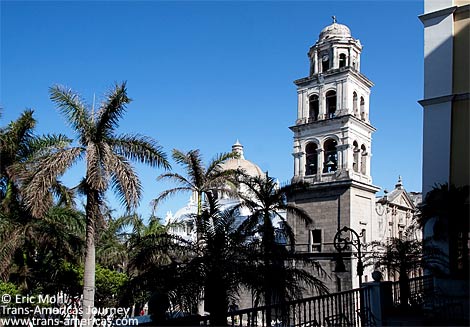 The 18th century cathedral in the Zocalo of Veracruz as seen from the pool deck of the Gran Hotel Diligencias.

In 1795 a few humble rooms were created and the hotel was born. Today Gran Hotel Diligencias has more than 120 rooms and is a well-kept grand dame–solid and stuffy in a comforting kind of way. And you can’t beat the location or the pool deck.

The best budget hotel option in Veracruz has to be Hotel Playa where we got a private room with a bathroom hat was clean and comfortable and even stylish for 300 pesos (about US$16) plus the place is right on the malecon.