Villa de Leyva, about 100 miles (160 km) from Bogotá, is a charming mountain town full of colonial architecture, cobblestone streets, and a pleasing mix of locals and visitors. That’s why it’s one of the most famous and popular members of Colombia’s elite group of Pueblos Patrimonios. The sights and attractions around Villa de Leyva, including Colombia’s best winery, a phallic archaeological site, and a house-made entirely of terracotta, are just as interesting as the town itself. Many travelers come to Villa de Leyva for just one day but we bet we can convince you to stay a little longer with our travel guide to Villa de Leyva.

The main plaza in Villa de Leyva is the largest in Colombia and one of the largest cobblestone plazas in all of South America. (click to see a larger version of this panorama)

Founded in 1572, the town sits at just over 7,000 feet (2,100 meters), so pack your layers. Even when flooded with swanky weekenders from the capital, Villa de Leyva retains an antique air. The town’s impressive Plaza Mayor is the biggest plaza in Colombia at 150,694 square feet (14,000 square meters) and some say it’s the largest cobblestone plaza in all of South America. 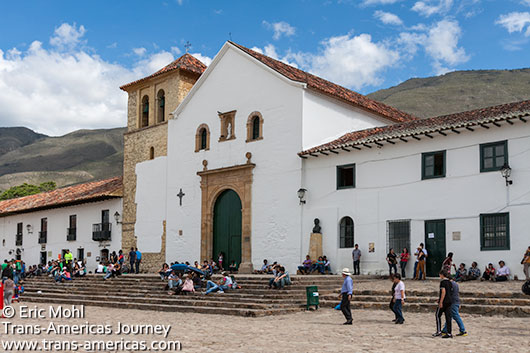 The church that anchors the main plaza in Villa de Leyva, Colombia.

In a town so historic it’s no surprise there are many museums to visit. Here are a few we liked. 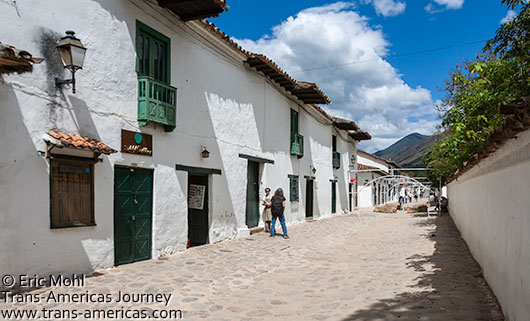 An atmospheric street in Villa de Leyva, one of Colombia’s most popular Pueblos Patrimonios.

For Colombian history: The Casa Museo Antonio Nariño (free) is devoted to the life and times of aristocrat, early independence leader and former Presidential candidate Antonio Nariño. Displays about his many achievements are arranged throughout his former home. Frankly, the architecture was as interesting as the materials inside.

For geological history: Many dinosaur bones have been found in and around Villa de Leyva and the Paleontological Museum (3,000 COP/about US$1.00), which is run by a local university, is a good place to get an overview of the weird things that lie in the dirt around here. display cases overflow with fossilized sea creatures, ammonites and dug up skeletons of long-dead species. 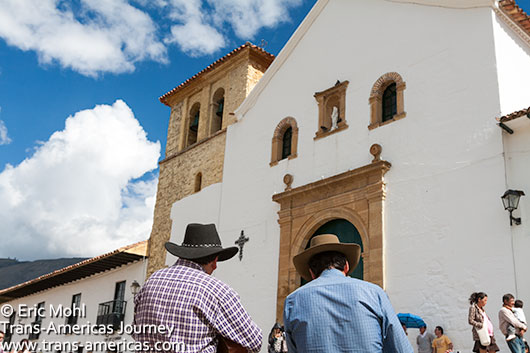 For religious history: The Museo del Carmen (3,000 COP/about US$1.00) is located in a church that dates back to 1845. It has five different rooms that house hundreds of pieces of religious art and books, some of which date back to the 1600s. It’s considered one of the best religious art museums in Colombia.

For something weirdly modern:  The Fundacion Casa Museo Luis Alberto Acuña (4,000 COP/about US$1.50) offers a breath of fresh air with rooms filled with modern art. Named for Colombian artist Alberto Acuña, the museum has a lot of his work plus rotating installations of work from other modern artists. 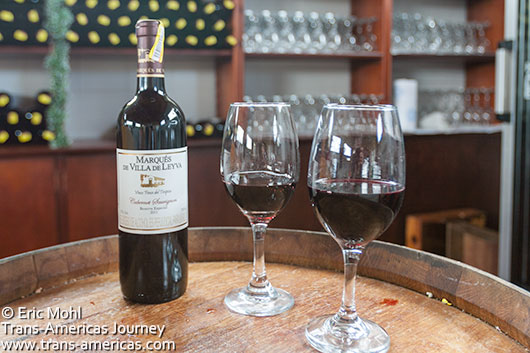 Colombia doesn’t have a lot of wineries, but you can visit one near Villa de Leyva.

Colombia’s best winery: There are at least three wineries in Colombia. We have been to two of them. Marquese de Villa de Leyva UPDATE: now called Viñedo Ain Karim ) winery just outside of town is, by far, the best. They have winery tours, tastings in a lovely tasting room with snacks and everything and you can buy bottles directly from the winery. Learn more in our story about the best winery in Colombia for The Latin Kitchen. 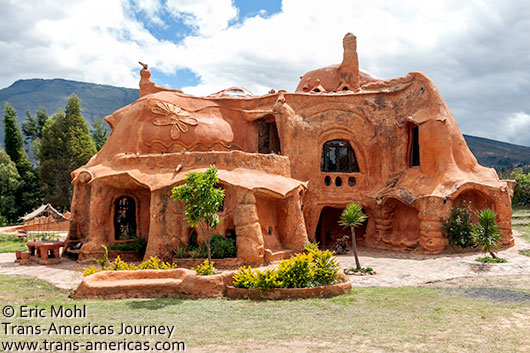 This house just outside Villa de Leyva is made entirely out of terracotta (inside and out) and is said to be the largest piece of pottery in the world.

The world’s largest piece of pottery: In 1998 a Colombian architect began work on a project on his property outside Villa de Leyva. His goal was to create a home using only materials found on his land. The result is a massive home-made entirely out of terracotta (baked earthen mud). The structure is terracotta. The furniture, countertops, lamp fixtures, sinks, and other details are terracotta. He calls it the largest piece of pottery in the world and for a few bucks you can tour the house and see for yourself. Learn more in our story about the terracotta house for Atlas Obscura. 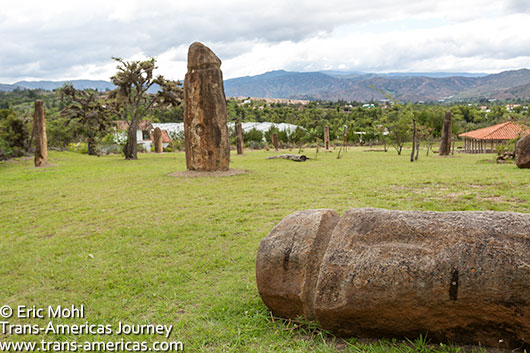 Dickhenge: The El Infiernito archaeological site (aka the Muisca Observatory, 4,000 COP/about $US1.25), just outside of town, gives you the chance to check out an outdoor area that the Muisca people used as an astrological observatory. You will, no doubt, notice the more than 30 carved stone objects rammed into the ground. You will also notice that every single one of them is phallic. We do not know what huge stone penises have to do with astrological observation. 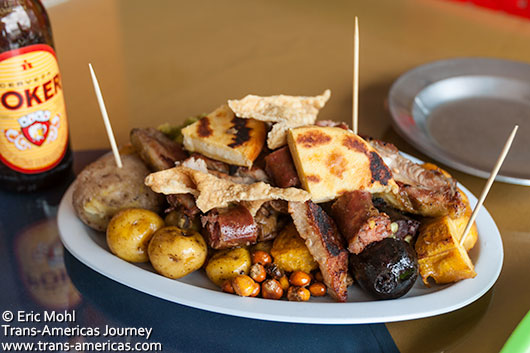 Sausage for everyone: The nearby town of Sutamarchán, about 15 miles (25 km) from Villa de Leyva, is famous for its longonizas (sausages). Especially on the weekend, the main drag through town is lined with restaurants that have huge grills out front on which they are cooking up piles of longanizas, morcilla (rice-filled blood sausage), chorizo, grilled pork morsels, potatoes, corn, and more which are served on a heaping plate called a picada which is meant to be shared. 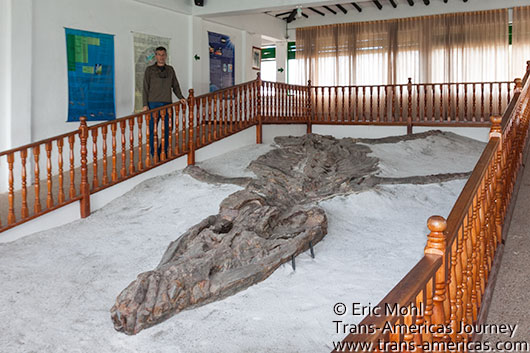 This giant prehistoric crocodile was found in the ground near Villa de Leyva and this museum was built around the find.

Lotsa fossils: The Fossil of Monquira museum (8,000 COP/about US$2.50) is about 10 minutes by car from Villa de Leyva in the town of Monquira. The museum is home to an impressive collection of fossils that bear witness to the fact that this area was once under a big saltwater bay. The most impressive installation is the fossilized remains of a 23 foot (7 meter) long prehistoric alligator type of thing which was discovered on-site by a local in 1977. The museum as actually built around it. The creature is so massive and out of context that it feels fake, but it’s not. 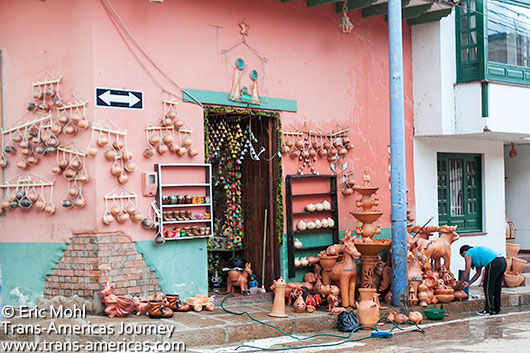 The town of Ráquira is famous for its pottery and not shy about it.

Potteryland: Ráquira, about 30 minutes from Villa de Leyva, is a town that’s famous for its pottery. Even if you’re not in the market for a garden donkey or a rustic set of coffee mugs, it’s worth a drive through just to marvel at the center of town, whose name means “city of pots”. It’s like a kitschy Disneyland for pottery lovers.

Every Christmas Villa de Leyva pulls out all the stops and hosts a massive fireworks display. The town’s huge main plaza is turned into a viewing area for the dramatic show that explodes over the colonial rooftops of the town.

They’ve been doing it for the past 30 years and town gets packed for the annual event. We paid 7,000 COP (about US$2.50) at the local tourism office just off the main plaza for access to the “VIP” viewing area in the main plaza where rows of plastic chairs were set up. We were told the money goes to buy Christmas gifts for kids.

The fireworks finally started around 10:30 after the crowds waited through hours of live music performance (made more excruciating by a terrible sound system) and some dance performance. At one point impatient locals started chanting “Luces! Luces!”.

The fireworks display lasted for about 40 minutes and it was worth the wait. Check out the show in our Christmas fireworks in Villa de Leyva video, below:

Obviously, tourism is a big deal in Villa de Leyva and the town has hotels to suit every type of traveler. We were looking for history, so we stayed at Hosteria Molino del Mesopotamia, one of the oldest buildings in Villa de Leyva. Built in the mid-1500s as a flour mill (molino means mill in Spanish), the original buildings of the hotel actually existed before Villa de Leyva officially did. The property was purchased by a family in 1960 and ultimately converted into a hotel.
Book Now

New buildings and rooms were added in a sprawling garden over the years but you can still stay in the original building which is nearly 450 years old. Yes, that means rooms have quirks (sloping floors, gaps in window jams, drafts) and the decor can best be described as an antiques hodge-podge, but the ambiance is nice. 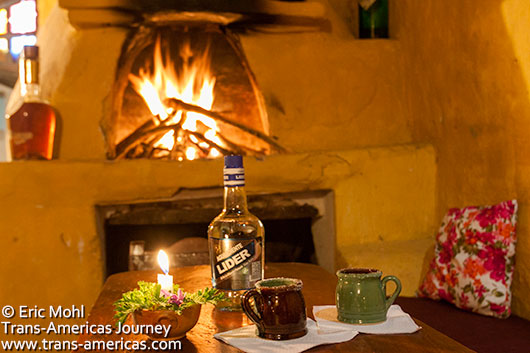 We enjoyed our very first canelazo in the small bar at the Hosteria Molina de Mesopotamia hotel in Villa de Leyva.

You can still see the massive mill stone in the hotel’s restaurant and the cozy hotel bar has a fireplace made from what used to be an earthen bread oven. That’s where we had our very first canelazo. Learn more about this beloved Andean hot toddy in our story about canelazo for The Latin Kitchen. Recipe included.

Villa de Leyva is also bursting with restaurants from basic eateries where you get a set meal for a few bucks to well-designed restaurants and bars headed up by creative chefs and bartenders. 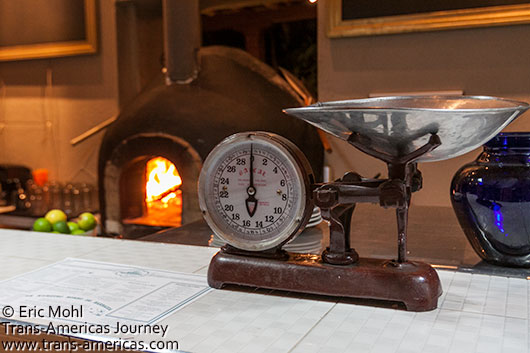 Good things come out of that wood-burning oven at Mercado Municipal restaurant in Villa de Leyva.

Mercado Municipal restaurant was a stand out for us. Chef/owners Laura Jaramillo and Mario Martinez, who trained at a culinary school in New York City and the Culinary Institute of America, respectively, have created a casually elegant, bistro-style restaurant with a welcoming back garden. They serve up fantastic food for breakfast, lunch or dinner. Many vegetables come from their own organic kitchen. They have a wood-fired oven for pizza and other dishes. They also have an in-ground oven they use to slow-cook succulent meat. The international wine list is impressive and you can expect to hear Amy Winehouse and Pearl Jam on the sound system.

The sister restaurant to Mercado Municipal is called La Bonita and it gets good reviews for its Mexican food, but we didn’t eat there so we can’t say for sure. We did enjoy a great michelada at Big Sky Lounge and Grill. Big Sky also serves a wide range of Colombian microbrews, including their own.

Like most things in Villa de Leyva, restaurants can get packed on weekends.

Believe it or not, there are plenty of other things to do and see around Villa de Leyva like an ostrich farm and some hot springs and a weird desert. Even we didn’t have time for it all. If you’ve done something fantastic in or near Villa de Leyva that’s not in this post, tell us about it in the comments section, below.