During our time in Panajachel (aka Pana), the biggest town on Lake Atitlán in Guatemala, we took a day to visit two smaller lakeside villages including San Pedro ad Santiago Atitlán where we saw living Mayan culture, met some dude named Maximón, witnessed a mass wedding, and discovered real southern BBQ. 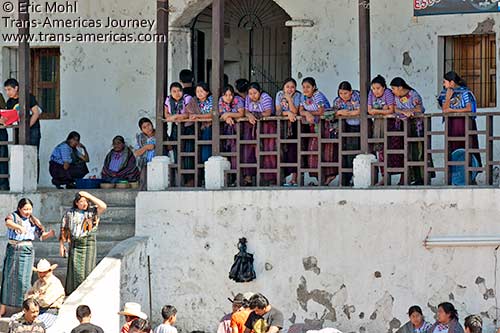 In Pana we grabbed one of many long, narrow, wooden boats called lanchas for the 45 minute ride across the lake to San Pedro la Laguna (25Q per person or about US$3) where we had a lovely breakfast at a restaurant right on the lake shore, complete with French Press coffee. A wander around San Pedro revealed a nice backpacker buzz with fewer travelers than Pana but a tempting array of coffee bars and Spanish schools and budget hotels.

San Pedro also has La Piscina, a swimming pool and restaurant. This is where, every Sunday at noon, you can enjoy Smokin’ Joe’s BBQ. Owned by a man from Georgia, Smokin’ Joe’s is said to be the only authentic southern BBQ in Central America and he serves up all the usual suspects and the usual sides plus homemade sauces and something called Flintstone Ribs. Sadly, we didn’t know about this weekends-only BBQ binge and we missed our chance for a fix at La Piscina. Don’t make the same mistake.

From San Pedro we got into an even smaller lancha for the short trip to the town of Santiago Atitlán where we were on a quest to get a glimpse of the cult of Maximón. Believed to be an incarnation of a Mayan deity, Maximón looks like a human wearing a huge hat and adorned with brightly-colored scarves and ties. He always has a cigar or cigarette in his mouth and is often surrounded by acloholic offerings which devotes bring to try and get their requests for good crops/marriage/health/profit/etc moved to the top of the list. 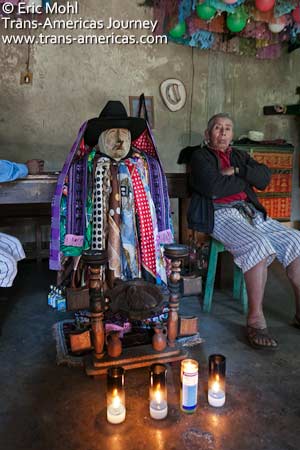 Maximón is honored in many Mayan communities where he resides in a different home each year. After asking around in Santiago we soon found Maximón’s current address in Santiago in a dimly lit room off the side of a house. We gave Maximón a cigarette and his attendants charged us 2Q each to look at him and 10Q (about US$1.25) to take a picture.

In addition to Maximón, Santiago is also known for its market though we were underwhelmed. What was impressive was how much atitecos (residents of Santiago) love stripes. Almost every man was wearing short pants with vertical red, blue or black stripes. The women’s huipils (the traditional boxy tunics) were made from a striped hand-loomed fabric embroidered with intricate and vibrant designs often involving birds and flowers. Some women also wear a head covering that involves wrapping a band of red fabric around their heads many times to create a kind of crown-less hat. 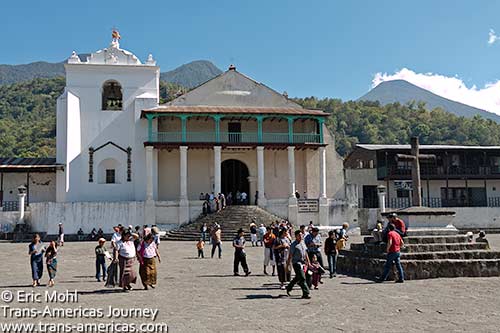 Mayan tradition gave way (a bit) to bridal tradition, however, when we visited the Iglesia Parroquial Santiago Apostol which was built in 1581. This is where Oklahoma priest and defender of the local Mayans, Father Stanley Francis Rother, was murdered by death squads in 1981 during Guatemala’s bloody civil war. A plaque in Rother’s memory is inside the church.

The day we visited, however, only happy things were being commemorated–lots, and lots of them. As we sat in the courtyard in front of the church at least 10 freshly married couples (and their beaming entourages) emerged from the church. There were more couples still inside milling around in their traditional clothes accessorized with long white veils, big white bouquets and even bigger smiles. 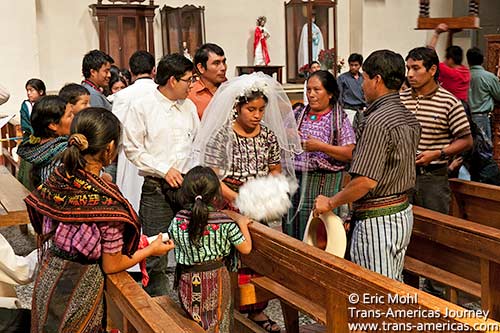 One of at least 10 freshly married couples following a mass wedding ceremony inside the Iglesia Parroquial Santiago Apostol in Santiago Atitlán, Guatemala. 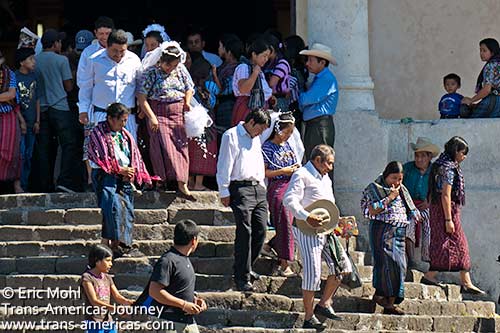 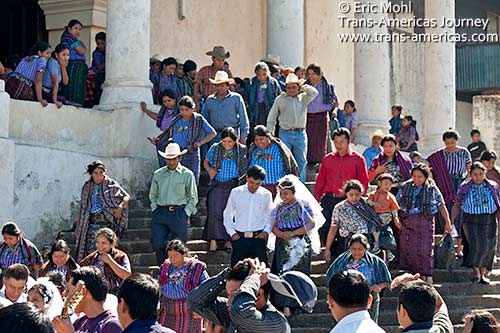 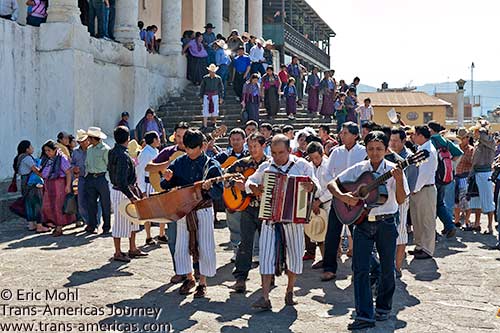 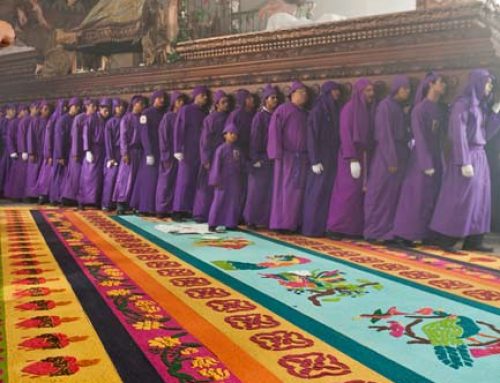 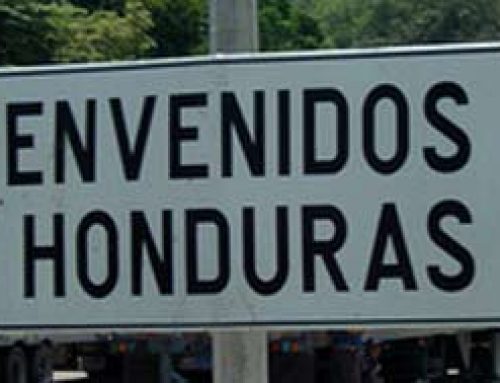 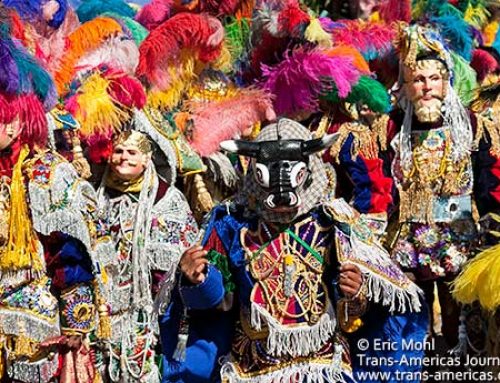 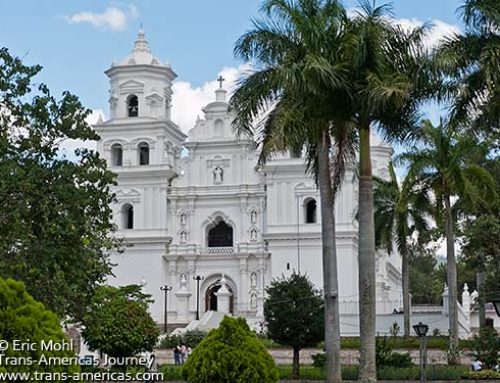 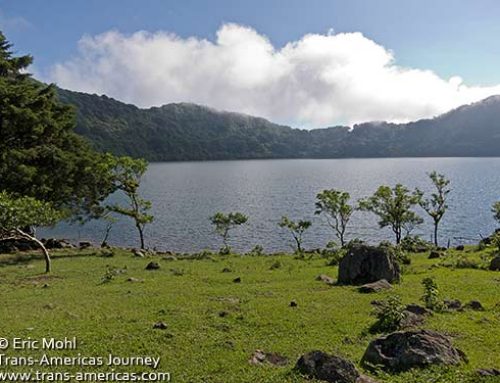 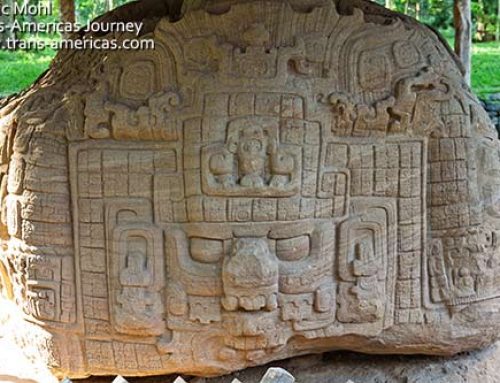 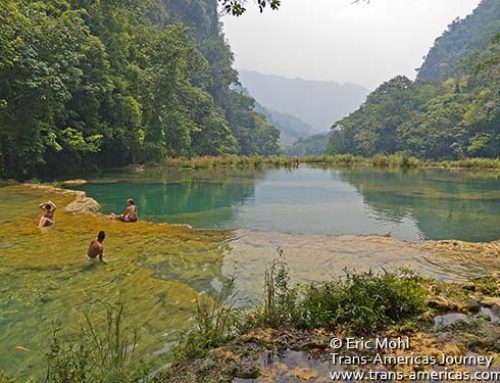 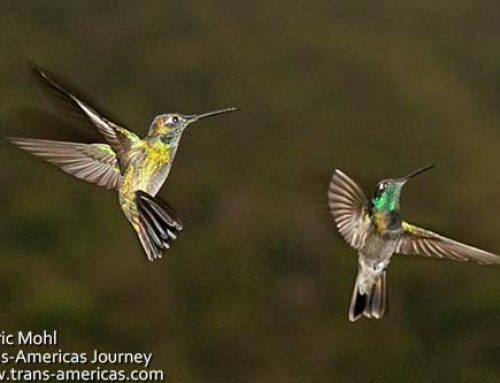 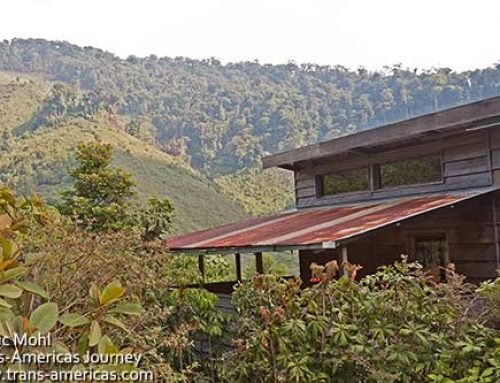