Villahermosa is not the most attraction-packed city in Mexico, but there are reasons to visit including a rare chance to see the 3 of just 17 known Colossal Heads carved by the Olmecs thousands of years ago, a nearby Pueblo Magico town, unusual archaeology, and a love motel. Get all that and more in our Villaherosa travel guide. 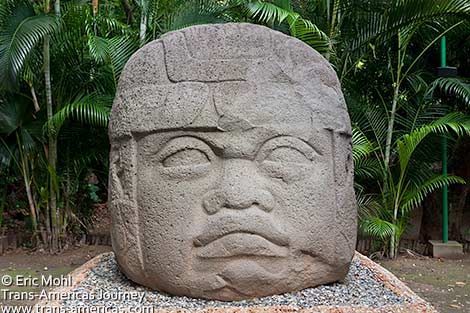 One of three amazing Olmec Colossal Heads at Parque-Museo La Venta in Villahermosa, Mexico. This one is about 8 feet (2.5 meters) tall.

What to do in Villahermosa, Mexico

Parque-Musueo de La Venta is where you’ll find some great examples of the awesome stone work of the ancient Olmec people displayed along a pleasant trail that winds through the park.

The most famous Olmec pieces are huge carved stone heads that weigh up to 50 tons. Some of them are 10 feet (2.5 meters) tall. They are rightly known as Colossal Heads and just 17 of them have ever been discovered. We saw Olmec heads for the first time in the Museo Nacional de Antropología, just one of the impressive museums in Mexico City, where they have two Olmec Colossal Heads on display. 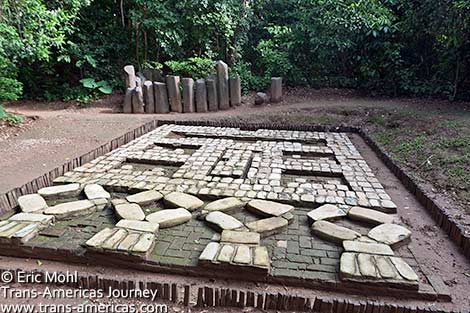 This intricate stone and jade mosaic was found buried in the ground at what remains of the Olmec city of La Venta. The piece was moved and reconstructed and is now at Parque-Museo La Venta in Villahermosa, Mexico.

But the Olmecs did lots of other interesting (and seemingly impossible) stuff with stone including intricate puzzle-like mosaics of stone and jade. They even carved stone into pillars which they used to build tombs. Did we mention that the Olmecs did this stone work between 1500 and 400 BC?

The epic Olmec relics at the Parque-Museo La Venta were moved to the park from their original home at the La Venta archaeological site in 1958 after oil was discovered there and drilling for it threatened the well-being of the pieces. 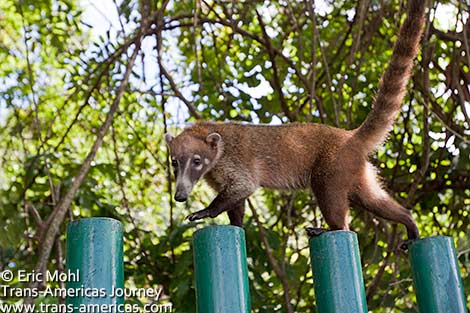 This is a coati, essentially a cross between a racoon and an anteater. They roam around the lush lakeside grounds of the Parque-Museo La Venta like squirrels in Central Park.

The Parque-Museo La Venta also includes a zoo which turned out to be a not-so-heinous home for a bevvy of birds including a parrot that barks “hola” at anyone who happens by. The zoo also has a gorgeous jaguar and a black jaguar and an ocelot plus the requisite troop of monkeys.

After getting our fill of huge stone carvings we headed out of town to see some what remains of nearby Mayan civilizations and to check out one of Mexico’s newest members of its group of Pueblo Magicos.

The interesting thing about the Comalcalco archaeological site is that the buildings here are made from bricks stuck together with a mortar made from oyster shells rather than the usual Mayan stone construction methods. 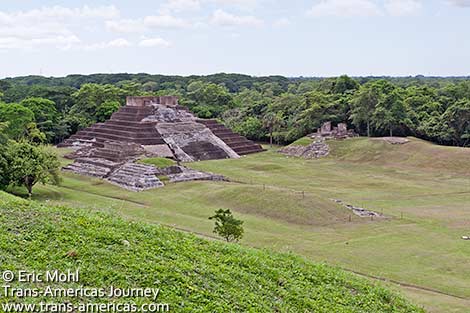 Unlike other Mayan cities, the buildings at the Comalcalco archaeological site outside Villahermosa, Mexico are made from bricks stuck together with mortar made using oyster shells.

Comalcalco also has a lot of plaster work still intact and a fair amount of sculpture, so the site is the perfect antidote to “pile-of-rocks-itis” which can afflict you if you visit too many Mayan sites offering little more than piles of rocks. 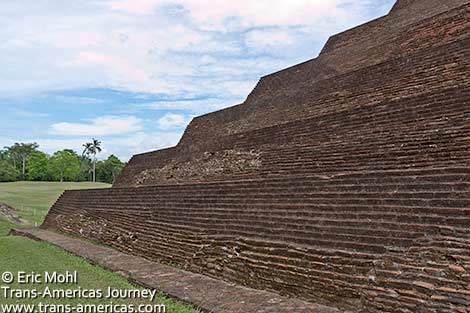 Unlike other Mayan cities, the buildings at the Comalcalco archaeological site outside Villahermosa, Mexico are made from bricks stuck together with mortar made using oyster shells.

After touring Comalcalco we stopped at nearby Hacienda La Luz, a cocoa plantation and factory that gives tours that explore the very important role this area and its early inhabitants played in the development of cocoa (and vice versa). Plus you get to taste the chocolate the hacienda now produces. Sadly, we arrived on a Monday and they don’t do tours on Mondays.

We love Mexico’s Pueblos Magicos–an elite collection of towns which the Mexican government has deemed noteworthy because of their intact architecture and their roles in Mexico’s religious and cultural history.

The drive from Villahermosa out to the Tapijulapa Pueblo Magico took us through gently hilly terrain with sheer rock walls in the distance past meadows, banana plantations, and palm plantations along the narrow winding road itself. Just lovely. Tapijulapa, with its classic red and white color scheme (a traditional combo that’s a hallmark of Pueblos Magicos), a big church on a hill (the town square is too small to accommodate it) and a slow pace, was lovely as well. 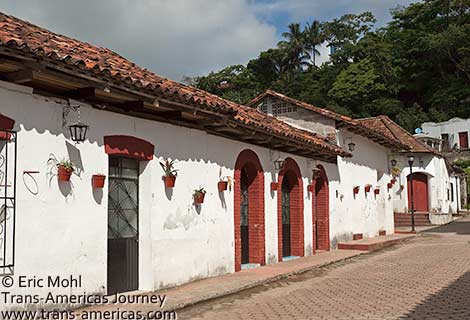 The streets of Tapijulapa, one of Mexico’s Pueblos Magicos, are historic and charming.

The town is well-known in Mexico as home to some of the best wicker furniture makers and there are plenty of small workshops/stores in town selling everything from picture frames to bedroom sets all made from wicker. If you don’t feel like shopping you can also hire a guide to take you across the river and into the Villa Luz Park to explore the caves and waterfalls there. 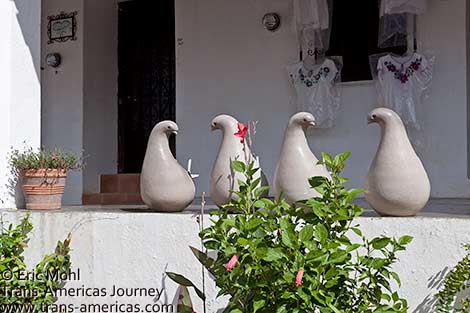 A street scene in Tapijulapa, which was designated as a Pueblo Magico by the Mexican government.

Perhaps because of the Pueblo Magico nod there was also a bit of hotel development and expansion going on with local owners of local hotel like the Hotel Meson de la Sierra up by the church (around 400 pesos or about US$22) and the Hotel Comunitario (from 200 pesos or about US$11) really working to spruce things up and expand.

We didn’t stay in Tapijulapa, but we did have lunch at a place called Mariquito on the square and that turned out to be a mistake. The restaurant had a lovely spot over the river, the food was fine, then the bill came: 155 pesos (about US$8) for one plate of food and 55 pesos (about US$3) for a plate of plain eggs–about five times what it should be and clearly a shocking case of  “tourist price.” We left Tapijulapa with a bad taste in our mouths. Beware.

Where to sleep in Villahermosa, Mexico

We’re not picky, but we spent more than two hours walking into (and right back out of) about a dozen different hotels ranging from skanky to scary to appallingly overpriced. We ultimately ended up at a so-called Love Motel on the outskirts of town called the Costa del Sol. 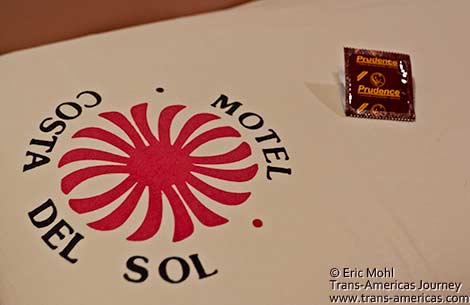 A stay at the clean and affordable Costa Del Sol “love motel” near Villahermosa, Mexico includes a free condom.

Like most of these discreet by-the-hour places, which can be found across Latin America, the Costa del Sol was good, clean value for money at 220 pesos (about US$18) for 12 hours. The free bedside condom was a nice touch.

Right downtown is the Hotel Olmec Plaza where we were invited to stay for a few nights by the owner, Omar, who is also president of the hotel association in town. Picture a well-run Holiday Inn in any mid-size city in the US and you’ve pretty much got the picture. Not a lot of soul, but all of the services you’d expect and close to Villahermosa’s waterfront area and the downtown pedestrian mall. The Hotel Olmec Plaza is also close to Tacolandia where we appreciated the playful name and the piled-high tacos al pastor.