After enjoying our very first chiles en nogada (a delicious seasonal and regional specialty) at acclaimed hotel and restaurant, Mesón Sacristía de la Compañía, owner  Leobardo Espinosa invited us to join him at a private tasting of some very special Mexican wine. As usual in Mexico, we were glad we said yes.

Less than a year ago Mexico’s President, Felipe Calderón decided it would be a great idea for many of Mexico’s wineries to get together and produce some special blends as commemorative bicentennial wines. President Calderón likes wine and has even been credited with ditching the Spanish wines historically served on the Presidential plane and replacing them with Mexican wines. Bravo.

Anyway, a group of 21 wineries across Mexico (their labels are pictured above) ultimately took up the President’s challenge and they worked fast and furiously over the  next few months to procure juice from 2008 and 2009 vintages, then blend it into three special bottles. We are familiar with a few of the wineries, but many participants were new to us. The list includes: Adobe Guadalupe, Bibayoff Vinos, Bodega la Redonda, Bodega Roganto, Bodegas Ferrino, Bodegas San Rafael, Bodegas Santo Tomas (one of our favorites), Casa Madero (the oldest winery in The Americas), Casa Pedro Domecq, Cavas Freixenet de Mexico, Chateau Camou, Moebius, Monte Xanic (another favorite), Valmar, Villa Montefiori, Vinicola San Patricio, L.A. Cetto, Vinos Tanama, Vina de Liceaga, Vinedos Aldo Cesar Palafox and Vinedos Azteca. 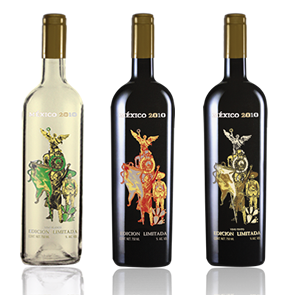 Together they created three limited edition wines called Vinos Mexico 2010 to commemorate the bicentennial of Mexico’s independence from Spain: one Elite white wine, one Elite red wine, and one Premium red wine. The wines were unveiled at Restaurant La Noria, a swanky eatery in a former hacienda in a swanky suburb of Puebla, during a formal private tasting sponsored by Vineria, the big wine distributor in Puebla. Sophisticated wine writers, hoteliers, wine club members, restaurant owners,  and lucky us got to taste the Elite white and the Elite red.

The white Elite, a blend of Chardonnay, Chenin Blanc, Colombard and Sauvignon Blanc, starts with a bracing pucker, has a nice green nose, and finishes with a lot of oak. There’s also a lot of honeysuckle which starts out lively but bloats at the finish. It’s a bit all over the map, but the effect is pleasing. The wine, made with juice from seven different wineries, improved substantially when poured very cold and it was very good with food, particularly the ultra-fresh ceviche we were served.

Really, the task of blending so many different types of grapes from 13 different wineries into a complex wine is nearly impossible. What the winemakers did accomplish is the creation of a very easy to drink, no-brainer, light-bodied red that makes a good alternative to rose and would make an excellent base for sangria. 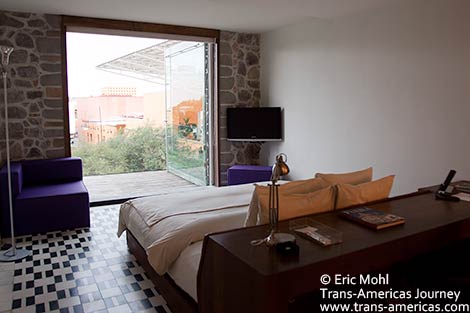 Our home base for this event was La Purificadora hotel where we spruced ourselves up in the solid alabaster shower (yes, even the floor is made from alabaster) and got our fancy clothes back into presentable shape (it’s not easy carting around cocktail party duds in the back of a truck).

Part of Grupo Habita, La Purificador is a favored haunt of politicians and movie stars (there were literally paparazzi stalking famous fellow diners during breakfast in the hotel’s restaurant when we were there) and the sleek/chic atmosphere got us in just the right mood for the sophisticated and elite wine tasting.