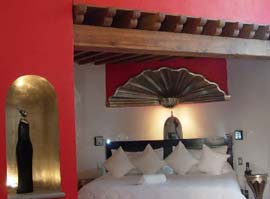 The excitement has finally settled down following Mexico’s nationwide mega-fiestas marking the country’s 200th anniversary of independence from Spain which culminated on September 16, Mexico’s Independence Day. Now it’s time to start gearing up for the country’s 100th anniversary of the Mexican Revolution being marked on November 20 and the place to be is the cosmopolitan city of Santiago de Querétaro.

This UNESCO World Heritage City is where the Mexican constitution was written and signed following the revolution and you can sleep right next to the Teatro de la Republica where that momentous event took place. Just book a room at aptly-named La Casona de la Republica. 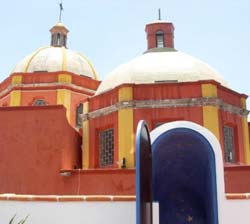 Housed in a mansion that was built in the late 1800s, the 15 rooms (from around US$175) at Casona de la Republica are enormous and each offers something breathtaking—a private plunge pool, a hand-painted dome over the bed, windows hand etched with art deco swirls. One room has a huge private deck so close to the tiled domes of downtown cathedrals that you feel like you can reach out and touch them. It’s all the brainchild of architect Gloria Santos who also owns the equally historically stunning Casona de la China Poblana  in Puebla. 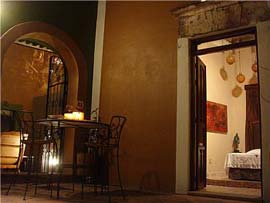 Just down the street, but a world away, is La Casa del Atrio. Part art gallery (one of the owners is an art dealer) and part B&B this sanctuary is eclectic and homey. The six rooms (from  around US$100), including three brand new even larger rooms just unveiled this month, are located across the street from the petite and well-curated Museo de Arte de Querétaro. It’s the city’s best bargain with lovely indoor and outdoor sitting areas, original art work on every wall (much of it for sale), incredibly hospitable owners and a coffee shop nestled under crumbling arches that were part of the city’s ancient (and very Roman) aqueduct system.

Our review of these hotels was originally published by iTraveliShop