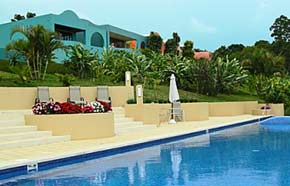 If you wanted to create your own hotel you’d also want to have the skills possessed by Charlene and Sherrill Broudy. The former is a designer and artist. Her husband is an architect. Their creation is Xandari Resort & Spa in the Central Valley of Costa Rica, where all of their talents shine.

Charlene first visited Cost Rica back in 1982. By 1989 she was suggesting this Central American country as the location for the hotel the pair had been dreaming about. In 1996 Xandari was born on a 40 acre plot that had been a coffee farm in the foothills of the central valley at around 4,000 feet.

Xandari (the X is pronounced like a Z) is a word made up by the owners who define it, in part, as “a state of mind, a feeling, an inspiration, an enhanced appreciation for both our natural environment and the human creative spirit that transforms dreams in to reality.” And that about sums it up. 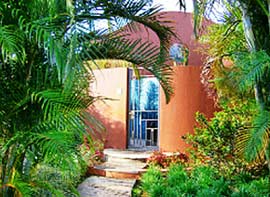 The 24 villas at Xandari range from an ample 500 square feet to a sprawling villa called The Star which clocks in at 1,420 square feet and includes two bedrooms, two bathrooms, a full kitchen, a huge deck, an enormous living room and an office.

All of the stand-alone villas have been designed to offer private entrances and kitchenettes. There are no televisions, but about 85% of the walls in each villa are glass to maximize the views across the lovely Central Valley which puts on a better show anyway. Villa #20 is the exception to this design rule. It is a unique round glass structure with a thatch roof which faces the jungle and mountains, instead of the valley, and feels very much “in” nature. 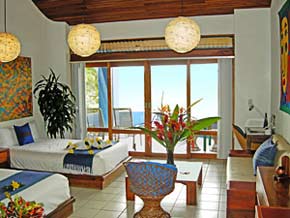 The villas also serve as a canvas for Charlene’s art (painting, stained glass, sculpture, tapestry and more) which adorns every surface in lavish colors. Turquoise, grape, papaya, cinnamon and other vibrant shades burst out everywhere you look. Some of the colors were even custom blended just for Xandari. Ask about visiting Charlene’s on site studio where the pieces are created.

In addition to a gallery’s worth of art, my villa had not one but two full desks and enough closet and drawer space for the Brady Bunch. My patio was so big I could have played croquet on it or in the landscaped private garden behind a charming wall.

The Wi-Fi worked fairly well in my villa, even though staff warned me that the connection might be limited. I also appreciated touches like enormous exotic flower arrangements and the fantastic, lightweight bathrobe though slippers to go with it would have been nice. 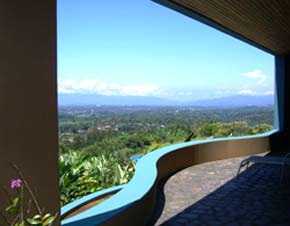 Xandari has an outdoor Jacuzzi and three enormous pools, two of which are 65 feet long. The third is 125 feet long. All three are kept clean using an-all natural salt process instead of chlorine which leaves the water crystal clear and not at all salty. If hiking, not swimming laps, is your idea of exercise you can take advantage of 2.5 miles of moderately groomed trails on the reforested property around the hotel. This gives you access to three waterfalls, one of which is more than 200 feet tall. A person of average fitness could walk every inch of the mostly-shaded trails in about an hour.

In addition to the chlorine-free pool and re-forestation efforts, other eco and sustainability measures at Xandari include using organic soil created by earthworms which are fed scraps from the kitchen to create compost, bulbs that use 75% less energy than traditional lighting, solar lighting on walkways, electric golf carts as on-resort transport, no air-conditioning (and I never wished for it), sun-drying of hotel laundry, collection of rain water for garden and organic farm irrigation, universal recycling and the use of biodegradable and non-toxic cleaning products. 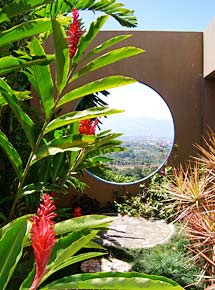 The one hour free sustainability tour of the resort and organic farm is worth taking and don’t miss the orchid house at the resort where their head gardener recently created a brand new hybrid orchid. Xandari’s plant a tree program is also popular. In addition, more than 70% of the staff (including the manger) is from the immediate village which supports the local economy and reduces the environmental impact of commuting to work.

The resort’s open air restaurant has stunning views of the Central Valley, especially pretty at night with all the twinkling lights. Prices are remarkably reasonable (a good thing since you are not near any other places to eat), but not all dishes on the vast menu were a success. When I was there my pasta verde, for example, was profoundly bland.

There were also some real home runs, however, including the fantastically fresh, large and tasty fish tacos for $10. Fresh squeezed orange juice, a Latin staple that’s shockingly hard to find in Costa Rica, is also served at breakfast.  Many ingredients are from the resort’s own organic farm and they even raise free range chickens for meat and eggs. 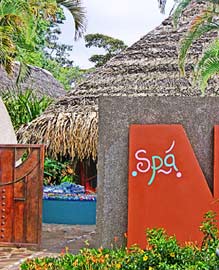 Continue the natural, healthy theme with a visit to Xandari’s Spa Village, a walled and landscaped oasis that’s a serene world unto itself. Book a massage (from $85), facial (from $75), wrap (from $90) and much, much more then indulge in one of five open air, private, thatch roof treatment jalapas each with its own private Jacuzzi, candles and shower. For a real treat, book the Welcome to Paradise package upon arrival or departure and get a 20 minute Jacuzzi with white wine or iced tea plus a 40 minute massage ($75).

Our review of this resort was originally published by iTraveliShop