Sacred spaces come in all shapes and sizes in Guatemala, including the churches around Quetzaltenango and the Laguna Chicabal volcanic lake. 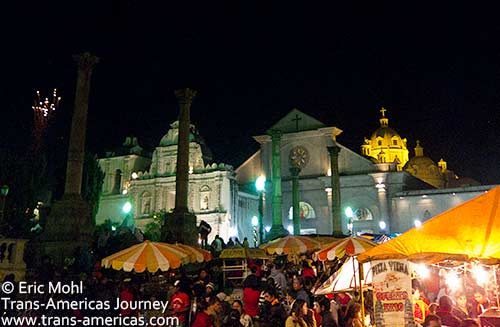 The cathedral in Quetzaltenango, aka Xela.

Quetzaltenango which, thankfully, everyone calls Xela (pronounced Shell ah), is the second largest city in Guatemala but it’s a mere shadow of sprawling Guatemala City. Xela has become a base for two pursuits: learning Spanish and scrambling up volcanoes including the still-active Santiaguito. This means there are plenty of travelers in town along with the usual lashings of volunteers and NGO workers.

Town is generally full of travelers, students, and volunteers around there’s a lot to do and see in and around Xela. The best directory of it all is a free, monthly, English language publication called Xela Who. It’s full of details, news, and gossip all written in a fun, smart ass style.

We checked into the motel-y Los Olivos Hotel (200Q, or US$25, with parking and breakfast) but we would have preferred to stay at the similarly priced Hotel Kiktem-Ja which has a rambling sort of Colonial charm and fireplaces–something that’s very important in Xela where temperatures dip way down and most rooms don’t have heat. Sadly, our truck wouldn’t fit in their courtyard.

At one point we got so cold in Xela that we bought a heating pad which sort of kept us warm when sitting around the room and we also used it to heat up our bed at night like a hot water bottle. 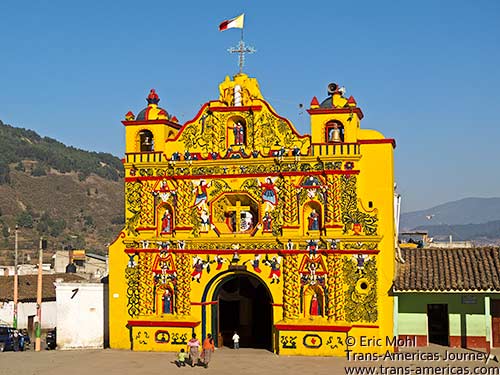 This yellow church near Quetzaltenango, is the brightest we’ve ever seen.

The brightest church in Central America

Less than half an hour from Xela is a tiny town with big wow of a church. San Andrés Xecul is home to the brightest, most exuberantly decorated, most unexpected church we’ve seen to date–and we’ve seen dozens and dozens of churches.

Often simply referred to as “the yellow church,” the incredibly bright facade is decorated with a mix of Catholic and Mayan iconography including crops, jaguars, angels, flowers, tigers, and crude humans. If you stand back and squint the front of the church looks a bit like the richly decorated huipils worn by most indigenous women right down to the boxy shape and colorful details. 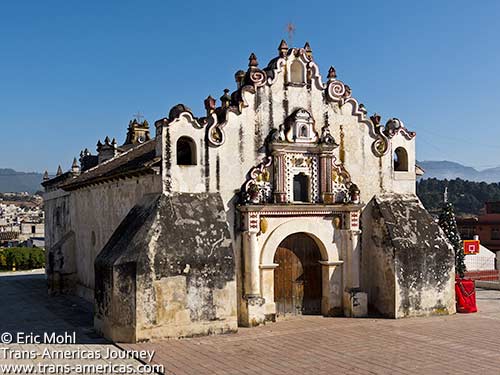 Built by the Spanish in 1524, this is the oldest Christian church in Central America.

Iglesia de San Jacinto church, in the nearby town of Salcajá, may be boring old white, but it’s remarkable for another reason. Founded by the Spanish in 1524, Iglesia de San Jacinto is the oldest Christian church in Central America. The church doors were locked when we visited the church so we had to be content with admiring the facade which is decorated with carved animals and fruit that literally pale in comparison to the cacophony of color on the yellow church. 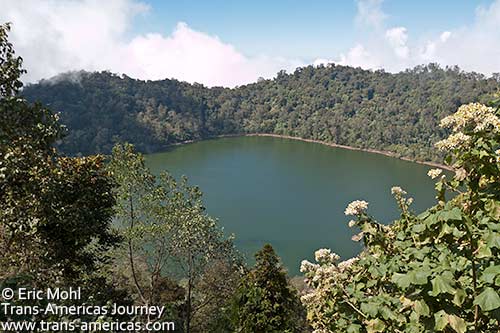 The Mam Maya believe Laguna Chicabal, located in a volcanic crater, is sacred.

Mayan and Christian worlds collide again at Laguna Chicabal, a sacred lake located in a volcanic crater about 40 minutes outside Xela.

At the trail head there’s a small ranger station (15Q, about US$1.90, entry per person, 10Q, about US$1.25, to park) and a collection of basic dorm cabins for rent. From there a very steep and narrow dirt road heads up to the rim of the caldera. After about 30 minutes of walking we reached a view point with a few rickety picnic tables and views of Santa Maria volcano. 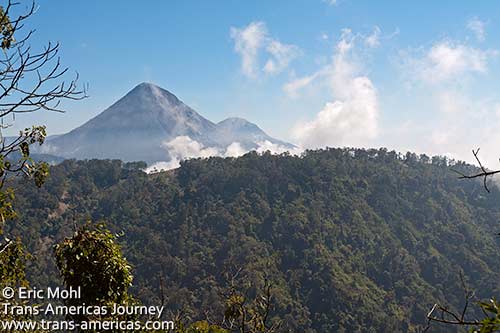 Santa Maria volcano as seen from the view point on the trail to sacred Laguna Chicabal.

For best views get here early since the clouds move in by noon. And do not follow the signs that say “Laguna.” Instead, head for the Mirador and take the steep wooden staircase down to Laguna Chicabal from there. 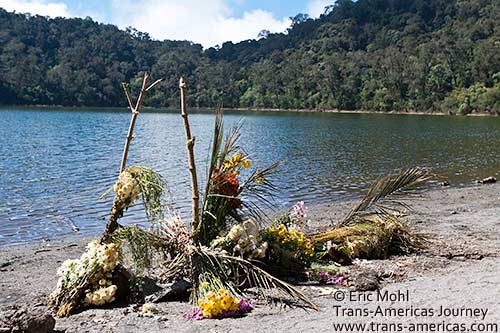 A Mayan offering left on the shore of sacred Laguna Chicabal.

A trail encircles the clear, inviting lake but no matter how hot you are do not jump in for a cooling swim. Laguna Chicabal is considered sacred by the Mam Mayans who come here to make offerings at lakeside shrines. Basic camping is allowed in one designated lakeside area, but there are no facilities at all and swimming is not allowed. 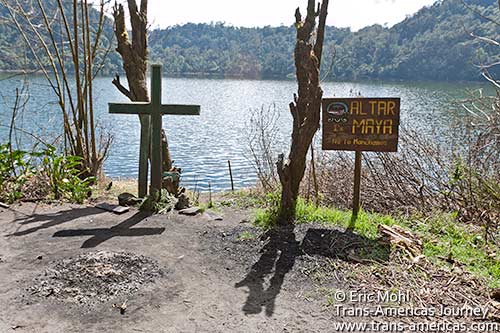 A Mayan shrine on the shore of sacred Laguna Chicabal.