It’s not your fault if you’ve never heard of Costa Rica’s Central Valley. This huge and diverse area, which includes the capital, San José, is way down on the totem pole of tourism in Costa Rica where beaches, volcanoes and jungles hog up all the space at the top. Luckily, we leave no valley untrampled, especially when it promises topiary, the craziest group bullfighting we’ve ever seen, coffee, and giant, festive ox carts. 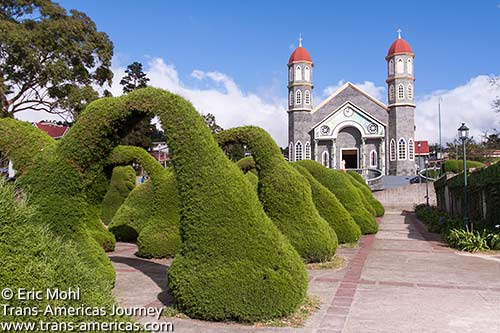 Forty years of trimming has turned the park in front of the chruch in Zarcero, Costa Rica into an ode to topiary.

Handy with the hedge clippers in Zarcero

There are really only two reasons to make a stop in the town of Zarcero. Cheese–some fine examples are made in this area at about 5,600 feet (1,700 meters) in the foothills above the Central Valley–and topiary. Yes, topiary.

For more than 40 years Zarcero’s Francisco Alvarado Park in front of the church in the center of town has been bursting with greenery that’s been pruned and plucked into dinosaurs, elegant arches leading to the church, even a traditional Costa Rican ox cart (more on that below). We heard tell of a shrub that looks like a monkey riding a motorcycle, but we never saw it. Shame. 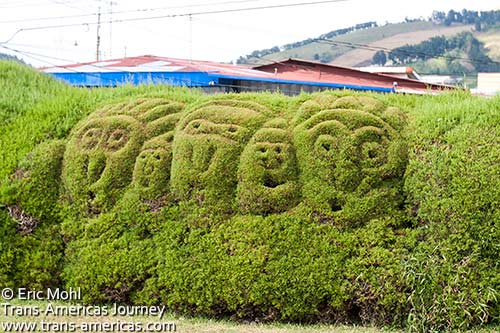 Shrub monkeys (we think) deftly trimmed into the greenery in Zarcero, Costa Rica.

Creator and master of the hedge clippers Evangelista Blanco Brenes says it takes him about a month to tidy everything up. Then it’s time to start again. Maybe that’s why this unusual garden is also home to inspirational sayings including “Persevere and you will succeed.” 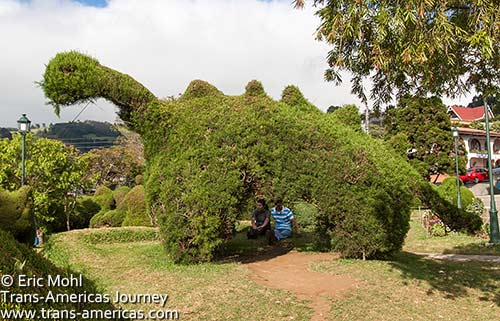 Dinosaur shrubbery in one of the wackiest parks in Costa Rica.

Bullfighting as a team sport in Palmares

The annual Festival Patronales in Palmares, less than 30 miles (50 kilometers) from San José, is one of the biggest celebrations in the Costa Rica. Basically, it’s a big county fair that goes on for two weeks every January. There are rides (mainly for kids), food stalls (mainly mediocre), live music, and bars. On weekends the festival is packed and lines are long. We visited on a weekday, however, and never had to wait for anything–not even the bullfights. 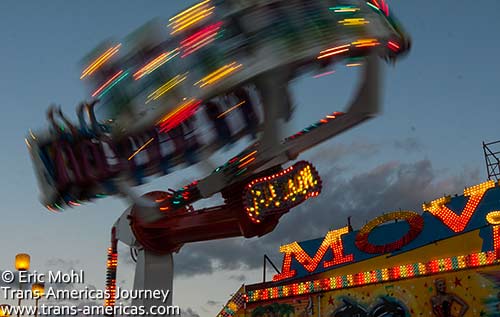 County-fair-like fun at the annual festival in Palmares, Costa Rica, one of the biggest in the country.

Before you speed dial PETA let us explain that Spanish-style bullfighting, in which a bull is stabbed and usually killed at the end, has been banned in Costa Rica for years. In its place Costa Ricans indulge in something that’s a bit like playing pin the tail on the donkey, only with a live (and sometimes less than enthusiastic) bull. 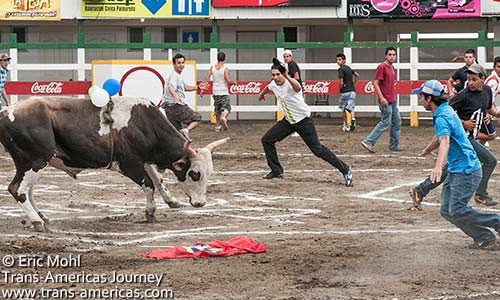 First, a smallish bull is released into the ring where people (mostly men, but some women get in on the action too) are waiting. Many of them are drunk. Some of them have costumes on. During the Palmares festival a man dressed as Robin (Batman’s sidekick) was a regular feature of the bullfights which are often televised. 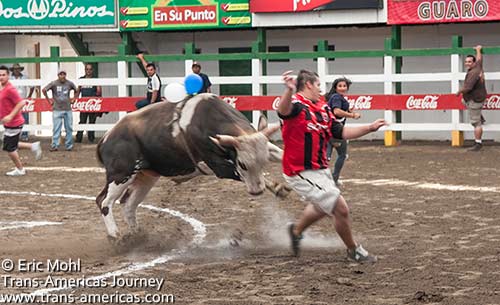 It’s all fun and games until your drunk uncle gets gored.

These people proceed to mock and taunt the bull in a mostly futile effort to get its dander up. The bull may make a few half-hearted charges or even some full-hearted charges. Injuries are not unknown and some people have died but more often than not Costa Rican bullfighting is about laughing at your friends and neighbors as they gather up the courage to pull a bemused bull’s tail then run away at top speed. 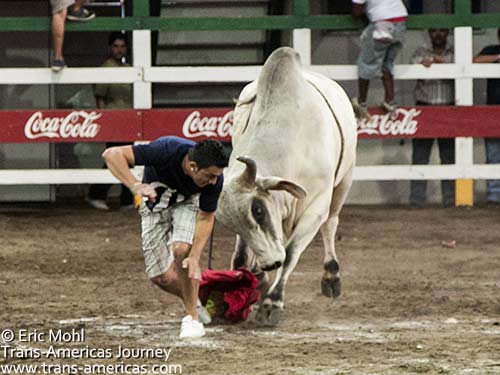 This is what happens when you let anyone and everyone into the ring with a bull.

Periodically, the plebs are cleared from the ring and an actual cowboy rides a bull. It’s pretty much US rodeo style though the bulls tend to be a bit smaller and so do the cowboys. 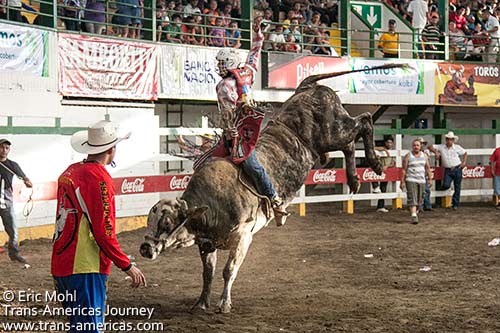 Bullfighting events in Costa Rica start off with some fairly routine bull riding.

At the end of this spectacle the bull is roped by cowboys on horseback and gently lead out of the ring, probably no worse for wear at least physically.

Think you’ve got what it takes to get into the ring for some Costa Rican bullfighting? Best watch our video first.

Once the bullfighting–really more like bullannoying–was over it was time to bring on the dancing horses. Costa Ricans love fancy-footed horses and riders at the Palmares festival competed for top honors by performing a complex routine around the ring which included prancing in place on a wooden platform. 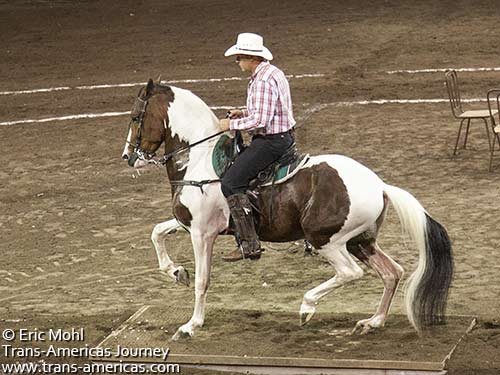 The horses were gorgeous and the riders were skilled but it was very hard to understand what the point of these trotadores was. It just looked like pretty tricks to us and because we didn’t understand the judging criteria it got boring more quickly than we’d anticipated. 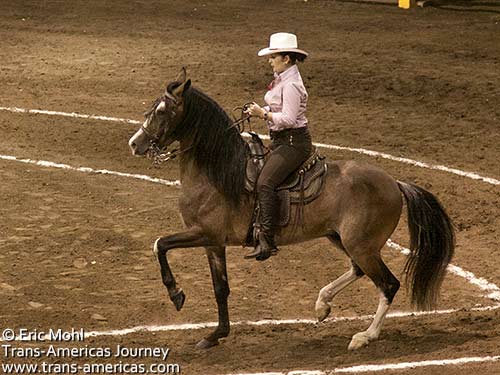 The footwork of these highly trained horses was beautiful but we failed to see the point.

During the Palmares festival we stayed at Casa Marta hotel. More like a modern home crafted from rich wood than a hotel, Casa Mata was created by its owner William Rodriguez, a surfer and self-taught architect. The hotel, named after William’s mother Martha, has a parking area, Wi-Fi, a small pool, delicious breakfast and it’s located right next to the festival grounds which meant we didn’t have to deal with traffic or parking.

The first time we visited Costa Rica, more than 10 years ago, we fell in love with a local coffee called Cafe Britt.The packaging was simple, the coffee was delicious (we remember just two types to choose from) and the price tag was low. We continued ordering it and having it shipped to us after we returned home to New York City.

Now Britt is the biggest coffee company in Costa Rica with a mind-boggling array of different roasts and bean types to choose from. The labels got fancy. The prices got higher. The product line expanded to include coffee mugs and dried fruit and tee shirts (much of it controversially made in China, not in Costa Rica). The romance was over.

But Britt did help bring Costa Rican coffee to the world and helped pave the way for many smaller coffee growers and roasters. One of them is Finca Rosa Blanca near the town of Santa Barbara in the foothills above San Jose. 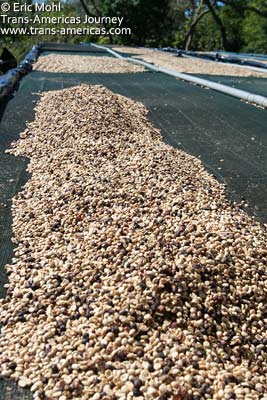 We’ve done many coffee growing and coffee processing tours during the course of our Trans-Americas Journey but the tour at this tiny, organic plantation was eye-opening.

First of all, there’s your guide Leonardo Vergnani. Leo’s spent more than 25 years in the coffee business (including stints with Brit) and is an acclaimed barista. His two and a half hour tour of Finca Rosa Blanca’s 42 acre (16 hectare) certified organic coffee plantation was enough to make us never contemplate starting an organic coffee farm.

It took the owners seven years to plant shade trees, re-plant coffee plants following the natural contours of the land and get rid of all traces of previously-used chemicals in order to achieve organic certification from the Rainforest Alliance (which actually allows some use of chemicals) and the much-more-strict German agency BCS Oko-Garantie.

Now all of the 8,000 to 10,000 pounds of coffee produced by Finca Rosa Blanca each year are chemical-free. It’s all dried in the sun (not in a wood-burning dryer). They reduced water usage during the processing of coffee beans from 300 gallons per process to 40 gallons. Everything is composted. 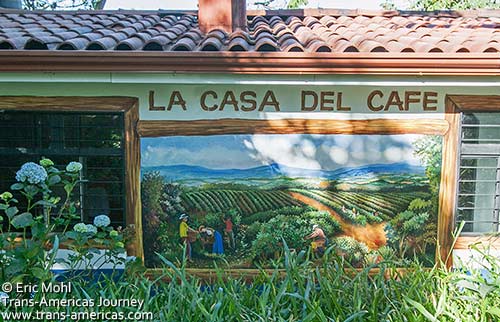 If you can’t wait until you get to Costa Rica to taste the results of all that hard work for yourself you can now order Finca Rosa Blanca coffee online. Leo also shared some insider tips about how to buy quality coffee–from checking for sneaky sugar to which packaging is best. That detail, and more is in our post about how to buy and brew coffee like a pro.

Speaking of coffee…Back in the 19th century, coffee beans harvested in Costa Rica were transported out of the hills on wooden carts which were pulled by oxen. These ox carts (carretas in Spanish) are still made in the town of Sarchi where they’ve become much more artistic and artisenal, becoming one of the few uniquely Costa Rican handicrafts. 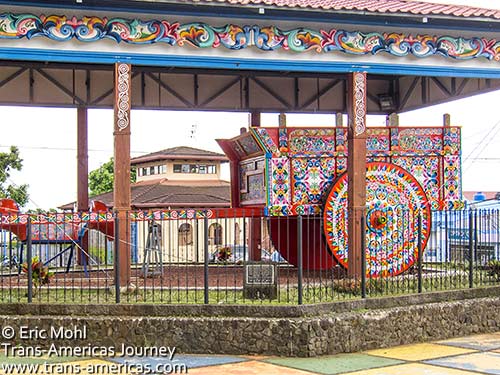 The world’s largest ox cart in Sarchi, Costa Rica is so big it has to be pulled by a tractor.

Just in case you’re not sure you’re in the right place, a massive ox cart has been put on display in Sarchi’s main plaza. The 45 foot (14 meter) long, two ton cart was built in 2006 in a bid to get Sarchi into The Guinness Book of to Records as home to the world’s largest ox cart. The monster is five times the normal size of an ox cart and we imagined babe, Paul Bunyan’s big blue ox, pulling it. Turns out, it has to be pulled by a tractor.

The most famous local ox cart dynasty is the Alfaro family, now lead by Eloy Alfaro (aka “Don Lolo”). They’ve been making ox carts since 1923 and theirs is the only workshop in Costa Rica that still uses machinery powered by a waterwheel. Much of the equipment is nearly 100 years old.

The first thing you see when you arrive at Fabrica de Carretas Eloy Alfaro is a tacky souvenir store selling ox carts in all sizes, including one cleverly turned into a drinks cart, along with a full battery of tourist junk. Hurry through the store and emerge out the back and you’ll find yourself in the workshop. 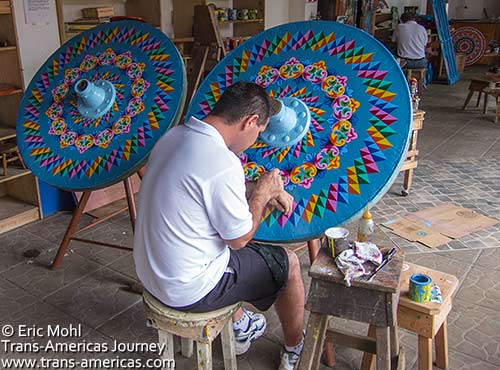 Ox carts crafted and painted by hand in Sarchi are one of the only truly Costa Rican handicrafts.

A few painters were at work when we stopped by but the equipment was silent and unmanned. However, a friendly worker happily moved a wooden flange, sending water to the factory’s waterwheel which soon had the ancient machines humming right along. It was almost as beautiful as the carts they make.

Check out the still-working water wheel that powers the Fabrica de Carretas Eloy Alfaro in our video, below.

We also stopped by Fabrica de Carretas Chaverri, best known as painters of ox carts since 1903. Again, we were greeted by an interminable souvenir shop and no one was in the painting workshop, perhaps because we visited on a weekend when some workshops close early.

The ox carts of Sarchi are so unique that UNESCO put them on its list of Masterpieces of the Oral and Intangible Heritage of Humanity. But if ox carts aren’t your thing, artisans in Sarchi also produce gorgeous wooden bowls, wooden furniture and leather goods.