Zion National Park in Utah packs a lot in including canyoneering, one of the most nerve-rattling hikes in the US national park system, and abundant wildlife including endangered California condors. 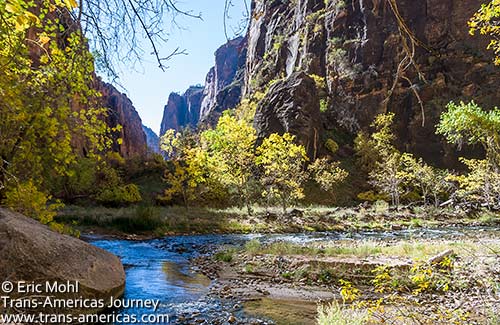 Rugged gorges and gentle streams are a hallmark of Zion National Park in Utah.

Pick a trail, any trail

We were hoping it would be warm enough to hike The Narrows which requires some canyoneering through water, but after setting up camp in the roomy Watchman Campground we decided that the temperatures were already too cold for The Narrows (though other, heartier, souls were attempting it outfitted in insulated hip waders). 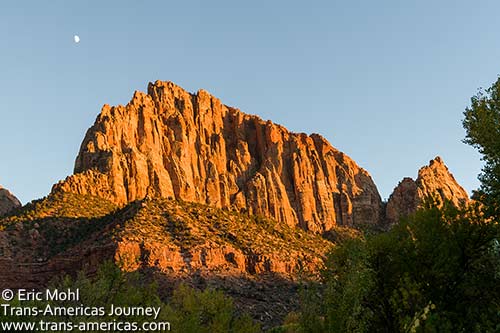 Our moonrise view from the Watchman Campground in Utah’s Zion National Park.

Instead, we focused on some of the park’s other trails like Angels Landing which requires traversing a narrow spine of rock that’s enough to turn some folks back. We’d braved that route on a previous trip to the park. 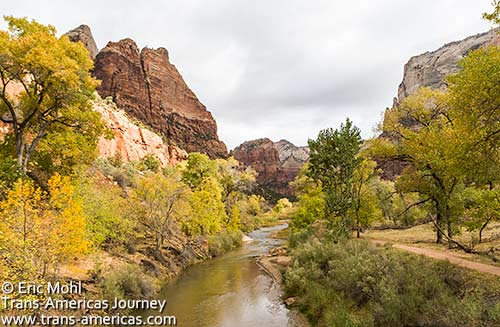 The Zion River as it meanders through Zion National Park.

First we hiked up to Observation Point along a trail which gains 2,000 feet (600 meters) in 4 miles (6 kilometers) of switchbacks pretty much straight uphill through a range of terrain, including some brief slot canyons and plenty of red rock. It all culminates in a great viewpoint over the park. The scenery along this hike was so gorgeous that before we knew it we were at the top munching on trail mix and enjoying the view. 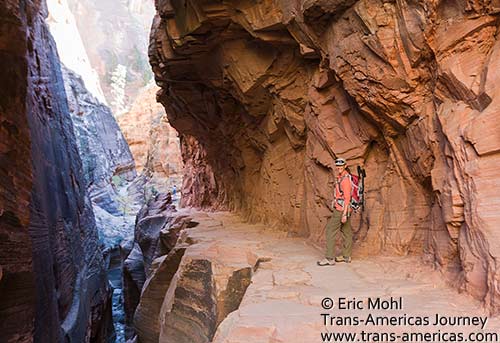 Karen on the trail up, up, up to Observation Point in Zion National Park. 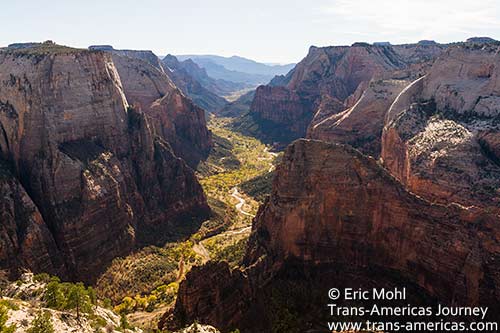 View of Zion Valley from Observation Point. The Angels Landing trail is on the ridge on the right. 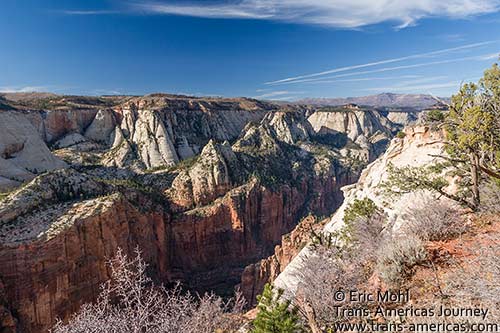 The view of Zion National Park from Observation Point. 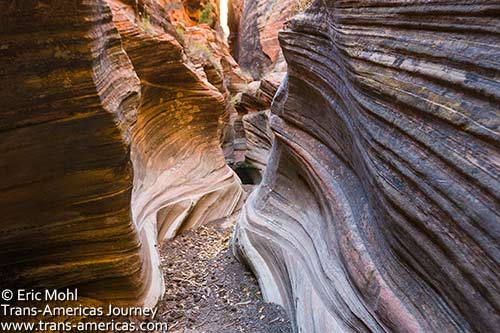 Slot canyons along the trail up to Observation Point in Zion National Park.

Suddenly, another hiker up at Observation Point looked to the sky and hollered “condors.” We were skeptical. California condors are endangered and famously hard to spot. But a quick check through binoculars revealed the enormous bird’s tell-tale wing markings and an identification number clamped to each animal’s wing.

A pair of endangered California Condors spotted in the sky above Observation Point in Zion National Park.

For the next 15 minutes we watched three California condors slowly circle and swirl above us, ultimately getting so low that we could see their markings without binoculars. We’ve read that condors are so comfortable with humans because they’ve learned that mammals, like us, often leave food behind. We wondered if these birds were hoping for some leftover trail mix.

Then, as quickly as they appeared, the huge birds were gone. Vanished. As if they were never there. All of the hikers at Observation Point looked at each other as if to confirm that we’d all just seen what we thought we saw. Energized by our condor sighting, we covered the trail back down in record time, almost like we were flying ourselves. 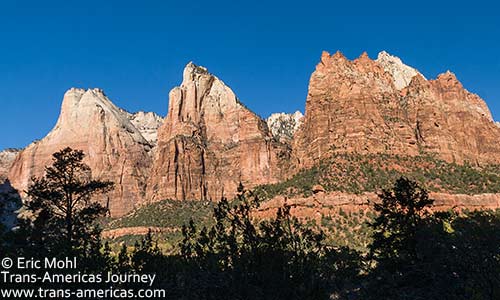 Formations called the Court of the Patriarchs in Utah’s Zion National Park.

The next morning we made a quick breakfast and headed out to the Emerald Pools Trail which threads together three different natural pools. On a sunny day, the pools each exhibit a different brilliant color. In the gathering grayness on the morning we were there, however, the colors were not quite apparent but it was a pleasant walk nonetheless. 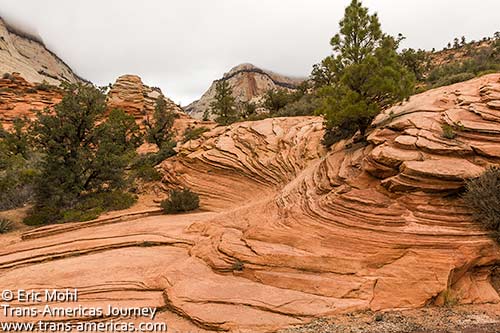 Rock formations along the Zion-Mount Carmel Highway through Zion National Park in Utah.

A panorama of the Kolob Canyon area of Zion National Park.

Not into camping? No problem. Opened by a former Zion National Park shuttle bus driver, the Cable Mountain Lodge in Springdale, just a stone’s throw from the south entrance of the park, has 50 rooms, some featuring jetted tubs, fireplaces, and full kitchens. All rooms have in-your-face views of Cable Mountain.

Don’t Miss: Zion Canyon Giant Screen Theater located next to Cable Mountain Lodge. It’s the largest 3-D screen in Utah and one of the largest in the world measuring 60 feet (18 meters) high and 82 feet (24 meters) across.

To ease traffic congestion and protect the environment Zion Canyon Scenic Drive is closed to personal vehicles from April through October. During this time all visitors must explore the heart of the park on board free, propane-powered park shuttle buses. If you want to the freedom of exploring the park in your own vehicle, like we did, plan accordingly.