Some of you may have read our previous post about Cancun and wondered why we were in Cancun in the first place. Well, we were in Cancun to attend the 2010 US Cuba Travel Summit which was organized to bring Cuban travel providers and Cuban government overseers together with travel providers from the US and Canada eager to strengthen or create inroads into the Cuban travel market and free up travel to Cuba. 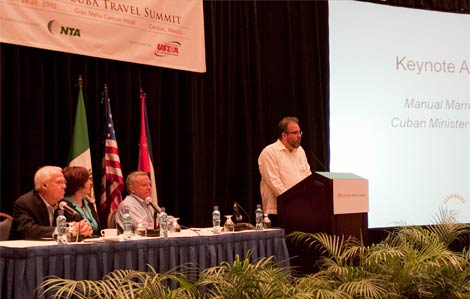 It was also organized to provide a platform for sharing opinions and projections about the future of the US government’s ban on travel by its citizens to Cuba. Representatives from a number of US-based “ban the ban” lobbying groups were on hand and North Dakota Senator Byron Dorgan (D), creator of the “Freedom to Travel to Cuba Act” (# S. 428) currently circulating in DC, took part via teleconference.

Like many travelers we’re dying to visit Cuba and right now we appear to be closer to lifting the travel ban than we’ve been in years. It’s an unfortunate choice of words, admittedly, but we heard sensible non-war-mongering people say “Cuba is now within striking distance” a number of times at the summit.

What does the embargo against Cuba have to do with the travel ban?

Powerful agricultural groups calling for a ban on the entire embargo against Cuba (the travel ban is a small part of the overall embargo) so they can open a potentially vast market up for American egg and wheat and corn farmers have joined forces with Senator Dorgan.

Together they’ve created the Travel Restriction Reform and Export Enhancement Act (HR 4645). Yes, it’s odd to think of an Iowa farmer eager to sell more corn arm in arm with a Manhattan socialite eager to be the first among her “friends” to get her tan on a Cuban beach, but there you have it.

Restrictions against Cuban nationals traveling back to Cuba have been eased and in June of 2010 the House Agriculture Committee voted to pass HR 4645 which contains language that would make it legal for US citizens to travel freely to Cuba. Now it’s up to Speaker Nancy Pelosi to decide when to put the bill up for a vote on the House floor.

A group called Washington Office on Latin America lobbies positions on all kinds of issues that impact Latin America, including the US travel ban and embargo regarding Cuba. Their focus is human rights, not politics, and they’re a good source of information, updates and calls to action.

The right to travel

In the meantime, the US Cuba Travel Summit brought to mind a number of interesting but often overlooked facts about our right to travel as US citizens:

And isn’t it ironic that Cuba so desperately wants the travel ban on US citizens to be lifted (for financial reasons and reasons of pride) while its own citizens most certainly do not enjoy the same freedom to travel? 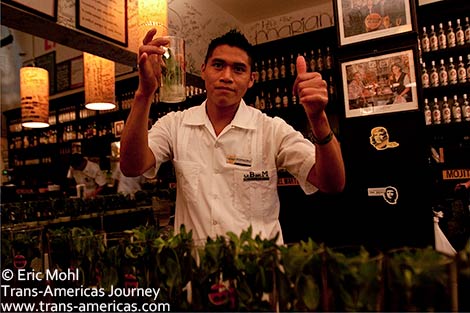 Mojitos prepped and ready at the bar at La Bodeguita del Medio where we celebrated the close of the US Cuba Travel Summit with other attendees.

The US Cuba Travel Summit culminated in a mojito-fueled finale at La Bodeguita del Medio in Cancun which claims to be a copy of the famous original in Havana, a notion Cuban summit attendees struck down as pure fallacy asserting that the Havana original is superior in every way. We sure wish we could go and see for ourselves before the ban gets lifted and a million other Americans go to Cuba.

By the way, one million is the actual number of visitors from the US that some tourism officials expect to travel to Cuba in the first year after the ban is lifted. Frightening. 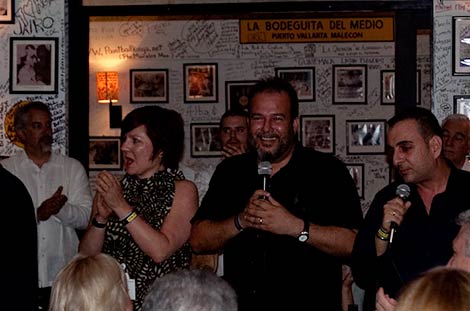 The bearded guy in the middle is Cuba’s Tourism Minister. Sadly, in the end, he just wasn’t that into us.

We made a lot of contacts at the travel summit, including Manuel Marrero Cruz, Cuba’s Tourism Minister who gave us his card and invited us to Cuba for an upcoming travel fair. We were thrilled. We emailed the minister and his colleagues repeatedly, hoping to turn the minister’s personal invitation into an actual trip to Cuba. Despite numerous bi-lingual follow ups, however, no one ever responded to our emails. Communism.

Applying for Treasury Department permission to travel to Cuba

Because we wanted to write and blog about travel to Cuba we also applied for official permission from the Treasury Department which is the agency that doles out permission for certain US citizens (like journalists) to travel to Cuba under certain circumstances. The Treasury Department did bother to get back to us–with a big fat N.O. We should probably expect to be audited.

For now, Cuba will have to wait. But we’ll always have Cancun.