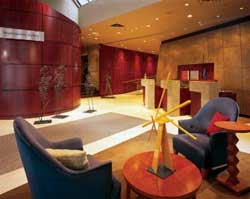 Looking for a way to put more “art” in the Art of Travel? Check out Vancouver’s 129 room Listel Hotel which spends more on the art it displays on just one or two floors than most hotels invest for an entire property—and I’m not talking about art that makes you say (or at least think) “My three-year-old could do that.”
By partnering with Canadian art world heavy hitters, the hotel has amassed a noteworthy  collection of both modern art and traditional British Columbian art. To make the most of its collection, worth more than half a million dollars, the hotel is divided into different floor categories, each with its own artistic focus.

Rooms on the two Museum Floors are a tribute to all things British Columbian. Curated in partnership with the University of British Columbia’s Museum of Anthropology, these floors feature handcrafted traditional hemlock and cedar furniture as well pieces of contemporary Northwest coast art in rooms painted to reflect the subtle natural colors of the region.

The two Gallery Floors were curated by the Buschlen Mowatt Gallery and each room features original and limited edition works by international and Canadian artists including Graciela Boulanger, Amanda Watt, Z.Z. Wei and Bernard Cathelin. 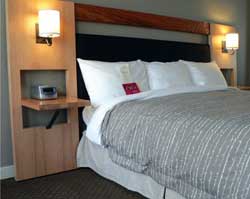 Larger Artist Series Suites on these floors feature a separate living room for a substantial amount of extra space. My suite was decked out with the “spiritual landscapes” of Otto Rogers but, at The Listel the art isn’t just hanging on the walls. My suite also featured an elaborate laser-cut metal headboard and (dare I say it?) an artful mix of antiques—including a jaw-dropping wet bar hutch—deco pieces and modern furniture. The built-in window seat was the perfect place to enjoy the French press of coffee that was delivered to my room every morning along with a newspaper.

The weak spot in these otherwise unique and exciting rooms is the bathroom which felt more motel than hotel, but I’ve been assured that The Listel is preparing to completely renovate every bathrooms in the place. 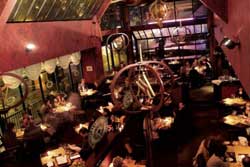 Despite the name—which makes it sound like a dank Irish pub—the hotel’s restaurant, O’Doul’s, creates its own art with a wide-ranging wine list and mouthwatering dishes (the fried oysters were delectable) that have earned it a Wine Spectator Award of Excellence every year since 1997. The restaurant also celebrates a great American art form and morphs into a classy and popular jazz club at night. The hotel has even released a compilation CD featuring 14 Vancouver-based jazz greats.

If your personal muse is more about shopping not sculpture, The Listel has you covered with a location smack in the midst of Robson Street which features one of Vancouver’s highest concentration of retailers including BCBG Max Azria, The Body Shop, Esprit, A/X Armani Exchange, Zara, Bebe and Canada’s own Club Monaco. Feeling inspired to buy some art? Nearly every piece on display in The Listel Hotel is for sale.