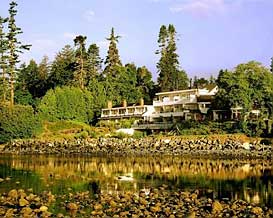 Easy French bohemian chic and the rugged sea-sprayed shores of Vancouver Island are strange bedfellows, but they get along just fine at Sooke Harbour House. Owners Frederique and Sinclair Philip may also seem like strange bedfellows, but talk to the stylish and welcoming couple for more than 15 seconds and it’s clear that their views about food, life and hospitality are perfectly in synch. Over the past 28 years they’ve put their ideals into practice and their passionate and innovative personalities are reflected in their award-winning inn and restaurant.

It all started in 1979 when the Philips’ bought a clapboard house, built in 1928, on the west coast of Vancouver Island overlooking the Strait of Juan de Fuca and began working their magic. For the next 16 years they lived in the basement of the house with their family while converting the upstairs floors into the inn of their dreams.

The addition of 16 new rooms in 1997 brought the total to 28 and while many small hotels and inns claim that every room is different, at Sooke Harbour House the rooms aren’t just different, they’re individual masterpieces—each decorated and perfected as if it were the only room in the house.

Names like The Underwater Orchard and The Edible Blossom hint at the themed (but never silly) whimsy behind each door—for example, elegant and comfortable furniture handcrafted from driftwood in the Driftwood Room and a vintage colander used as a light shade in the duplex Chef’s Room (the only room at the inn that does not have a view of the Pacific Ocean). Given the charming variety, I was delighted to be asked to divide my stay between the Thunderbird Room, which features gorgeous first nations art depicting the mythic thunderbird and a jetted tub on a private deck, and the Artist’s Study with its sleeping nook and chandelier over the indoor soaker tub. 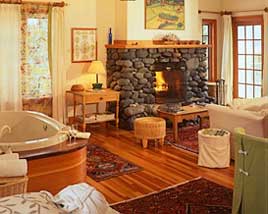 Every room has a wood burning fireplace which someone magically re-builds every day, leaving behind tightly twisted newspaper wands for you to light and hold up inside the flue to reverse the air draft before starting the fire. There’s also an elegant port decanter  that’s re-filled daily to encourage lounging in front of the fire or in the jetted or soaker tub found in every room.

All bathrooms are stocked with toiletries from Outer Coast Seaweeds part of Sooke Harbour House’s commitment to using locally sourced and organic products whenever possible, and while a phone and Wi-Fi access are provided you will not find a TV (though staff will deliver one upon request). The one weak spot was the in-room coffee maker which was the type I’d expect from Howard Johnson not from an inn of this caliber.

For maximum relaxation and minimum effort, all of the inn’s indulgent spa treatments except one are performed in-room, allowing guests to simply stumble from the portable massage or facial table to bed for a nap or the tub for a nice long soak.

Art is displayed everywhere at Sooke Harbour House in a wonderful, rambling mish-mash that seems randomly curated and placed by a precocious child but has actually been hand-selected by Frederique. Pieces in the guest rooms are not for sale, but art found in the common areas is, so shop away—just save some room on the credit card for the eclectic (and totally giftable) offerings in the small but well-stocked shop at the inn.

Over the years the award-winning restaurant at Sooke Harbour House has become a dining destination for guests and locals alike. Using locally grown and organic ingredients whenever possible, chef Edward Tuson crafts an ever-changing inventive, gorgeous and delicious menu that makes the most of the freshest ingredients from the inn’s own kitchen garden and from local farmers and fishermen. The cellar at  Sooke Harbour House has earned the Wine Spectator Grand Award every year since 2000 and the magazine named its wine list as one of the top 77 wine lists in the world. 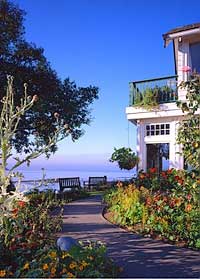 Recently officially certified as organic, the inn’s two acre kitchen garden is the most obvious manifestation of the restaurant’s commitment to sustainable, local and organic ingredients. Don’t miss the informative 30 minute tour of the garden lead every morning by head gardener Byron Cook who’s clearly in love with the more than 350 species of edible (and gorgeous) plants that he’s tended in raised planters, trellised arches and pots and planters for more than 20 years.

But you don’t have to book a table in the gorgeous dining room to get a taste of the place. My in-room breakfast included fresh-baked carrot, pear and fennel bread along with a pot of  homemade yogurt and an accompanying fresh fruit compote that I can still taste. Staff also leave a plate of  irresistible homemade cookies by the elevator, which is called Underwater Safari because its interior has been painted to give riders a glimpse of the bounty a scuba diver would see in the waters surrounding Vancouver Island.

Speaking of water, boots, rain jackets and umbrellas in all shapes and sizes are also provided for guests to use to combat the island’s notoriously dramatic weather. Me? I was praying for a storm so I could grab a cookie, head upstairs and curl up in front of my fireplace with a glass of port.