Tunja is the capital of Boyacá province. At 9,000 feet (2,700 meters) it’s one of the highest and chilliest provincial capitals in Colombia. Tunja can also boast about its picturesque mountain setting, scenic main plaza, mansion museums with the most unusual original frescoes we’ve ever seen (hint: hippos), and close proximity to Puente Boyacá (basically, the Gettysburg of Colombia). There’s even some local craft beer. Get it all in our city travel guide. 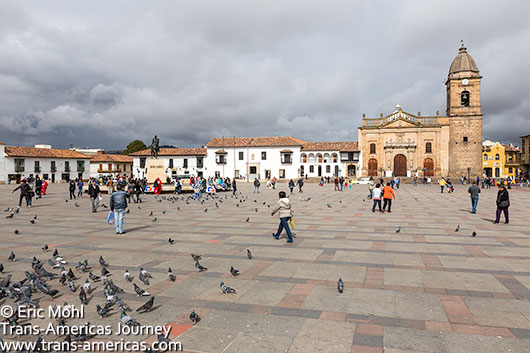 What to do in Tunja, Colombia

There are plenty of museums to visit in Tunja including religious museums and, less predictably, a pair of mansion museums with original murals depicting wild animals which the artist never saw with his own eyes. 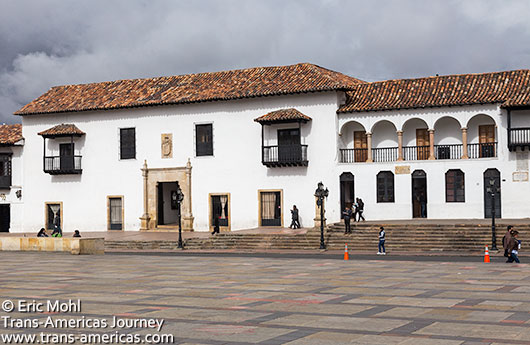 Do not miss the animal paintings inside the Museo Casa del Fundador Gonzalo Suarez Rendon in Tunja, Colombia.

Excellent examples of these animal portraits can be seen in the Museo Casa del Fundador Gonzalo Suarez Rendon next to the church on the main plaza. The ground floor garden is free to enter, but pay the tiny entrance fee (2,000 COP/about US$0.70) so you can visit the second floor where the painted ceilings are located. 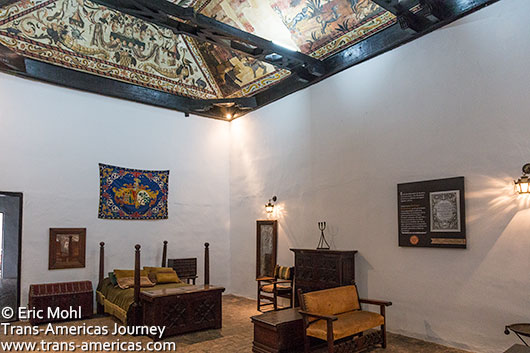 Upstairs at the Museo Casa del Fundador Gonsalo Suarez Rendon features antiques and original architecture but the painted ceilings depicting animals never seen by the artist are the real attraction.

One room is covered in detailed depictions of “Animals of the World” including a rhino and an elephant painted in the early 1500s with nothing more than a few plates from European books to go by. 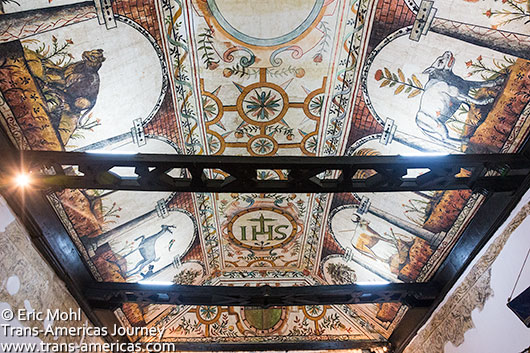 The artist who created this incredible ceiling in the Museo Casa del Fundador Gonzalo Suarez Rendon never saw the animals he was painting.

The animal murals on the ceilings were only discovered after a newer ceiling collapsed, revealing the amazing paintings. The work is still in fantastic shape and, truth be told, the artist managed to render most of the animals pretty accurately despite never seeing them himself. There’s a second painted ceiling with more animals and some animal frescoes done in charcoal and egg white as well as in paint. 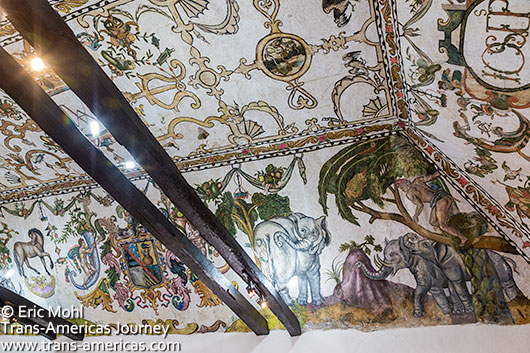 The Museo Casa de Don Juan de Vargas (3,000 COP/about US$1) also features some amazing animal-filled murals and ceiling paintings and the artists are believed to have worked from books in Juan de Vargas’ own library which included an impressive number of books from Europe. 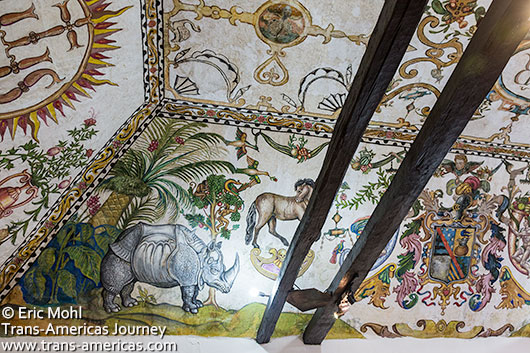 This incredible rhino on a painted ceiling inside the Museo Casa de Don Juan de Vargas made quite a journey to Colombia.

A paper written by John E. Simmons, President of Museologica, and Julianne Snider, Assistant Director of Penn State University’s Earth and Mineral Sciences Museum and Art Gallery, which was published in 2013 notes that the rhino images found in both the Museo Casa del Fundador Gonzalo Suarez Rendon and in the Museo Casa de Don Juan de Vargas that they believe was copied from a book on architecture that was written by Juan de Arfe in 1587 and may have also been influenced by a famous rhino image created by Albrect Dürer in 1515. 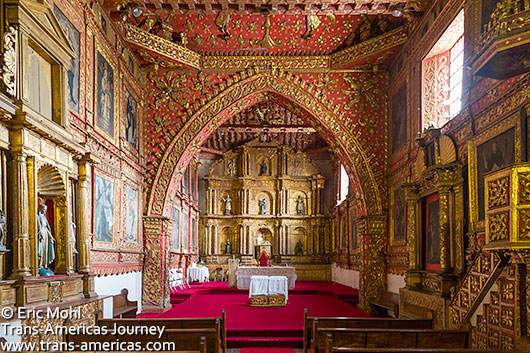 Leaving wild animals behind, we headed to the Claustro de Santa Clara Real (3,000 COP/about US$1, closed midday) where we gawked at the gawdy red and gold chapel as the guide (Spanish only) pointed out symbols from the indigenous Muisca culture which were added during construction including a big gold sun on the ceiling above the altar and Muisca faces on some of the figures. The chapel is now mostly used for weddings.  Big, fancy, red, and gold weddings…

It’s fitting that we went from the capital of Boyacá province to the Puente Boyacá memorial. Boyacá was one of Colombia’s nine original states and it’s known as the “Land of freedom” because this is where the Battle of Boyacá took place. 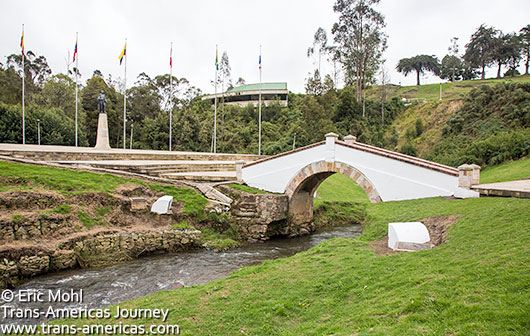 The Boyacá Bridge, near Tunja, where independence from the Spanish was won.

Puente Boyacá is pretty much the Gettysburg of Colombia. The sprawling, park-like, outdoor memorial (free) is located on both sides of the highway that runs between Tunja and Bogotá. Here you can see the bridge (puente in Spanish) over the Teatinos River where, in August of 1819, pro-independence forces defeated the Spanish in just two hours, marking the official start of Colombia’s freedom from Spanish rule. 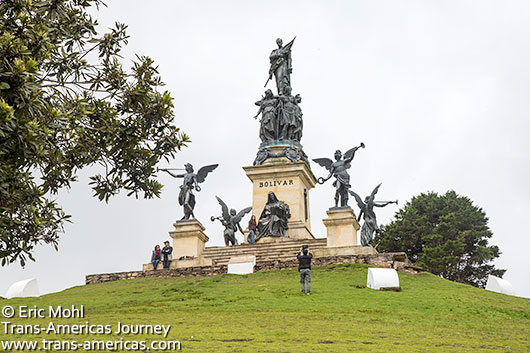 The grit of guerra (war in Spanish) has been glossed over with rolling lawns and epic statues, including a massive rendering of independence hero Simón Bolívar, of course. 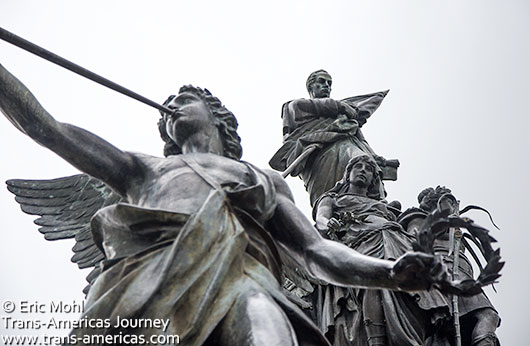 Where to eat and drink in Tunja, Colombia 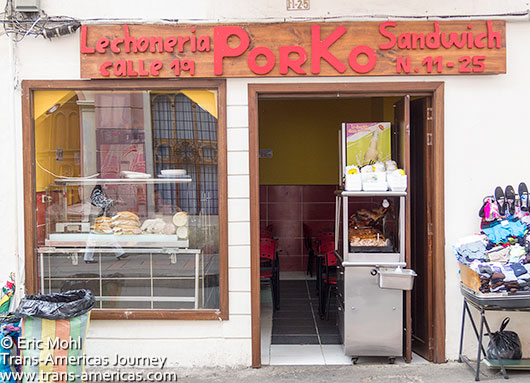 With a name like Porko, it has to be good.

The lechona (whole slow roasted pig stuffed with rice) served here is lovely and the made-to-order roasted pernil (pig leg) sandwiches on sesame seed buns with a choice of sauces (7,500 COP/about US$2.60) are delicious. Plus, it’s a sandwich shop called “Porko”. 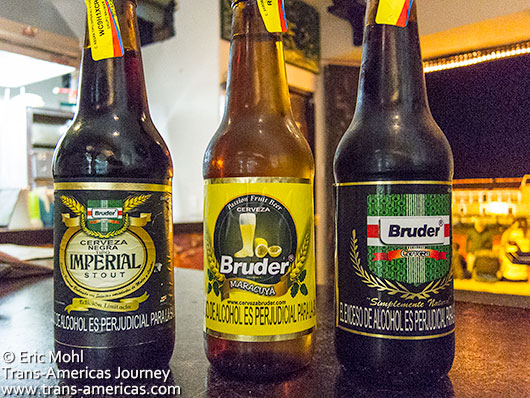 Bruder is just one of the two craft beers made in Tunja, Colombia.

Tunja is also home to two tasty craft beers. One is called Cerveza Magnus and the other is called Cerveza Bruder. Bruder also has a brewpub in Tunja which is large and welcoming and serves beer on tap or in bottles and has plenty of big televisions.

Where to sleep in Tunja, Colombia

We stayed at Hotel Casa Real just a few blocks from the main plaza (70,000 COP/about US$25, not including breakfast). It was charming (fresh cut flowers), clean, quiet, and comfortable.
Book Now