As Carnival (aka Carnaval) in Las Tablas, Panama continued, the parades started later and later and the crowds got bigger and bigger. By Day 3 (which always falls on a Monday) there was also an even more aggressive tone to the proceedings. Let’s get down to the serious business of serious fun at Carnival. 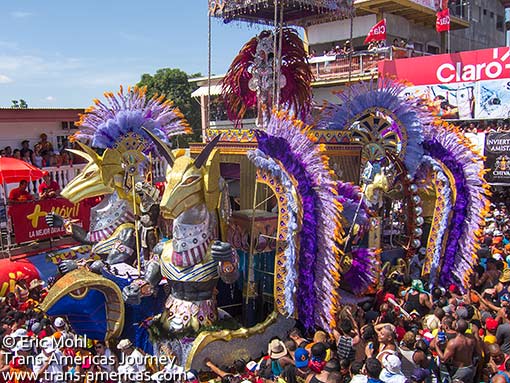 Calle Arriba’s daytime float during Day 3 of Carnival in Las Tablas, Panama. The Calle Arriba queen, Maruquel Madelaine Gonzalez Valesquez, can be seen on the nifty platform in the middle which raised and lowered.

A regal stand off

During the daytime parades on all previous days of Carnival the rival queens’ floats had kept a carefully choreographed distance between themselves, never venturing too close. Whether by accident or by design, during the daytime parades on Day 3 two enormous floats found themselves in a stand-off when the Calle Arriba (uptown) float pulled out in front of the Calle Abajo (downtown) float which was already lapping the main plaza.

Since the debut of the Calle Arriba float had to be heralded by fireworks (and neither queen’s camp was willing to back down or back up) the Calle Abajo float was forced to stop and wait before both floats could proceed under the blazing sun. Tensions were high. 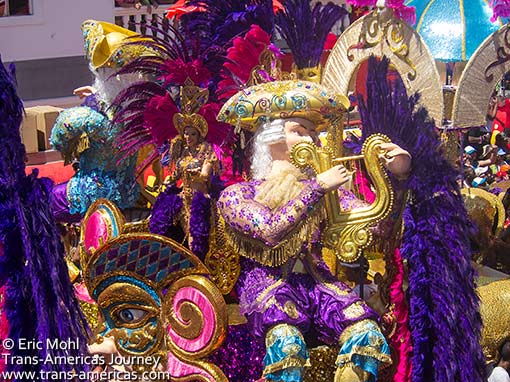 Supporters of opposing camps seized the opportunity to deliver a tirade of insults to rival queens who had no escape, stuck as they were on top of non-moving floats. “You had an abortion!” someone yelled. We’re from New York City where ugly things are hollered on the street all the time but that was a first.

It was impressive how the queens handled insults like that–usually with humor and an even bigger smile. The worst insults seemed to get the grandest accommodation. A favorite move was for the queen to pretend she didn’t hear the insult, force the person to repeat the insult, then yawn as if she’d heard it a thousand times before. 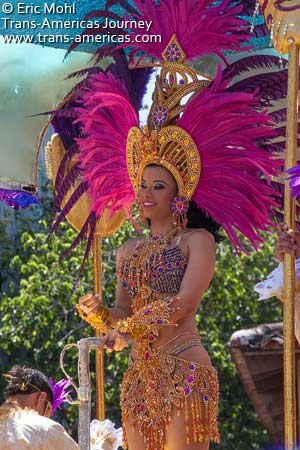 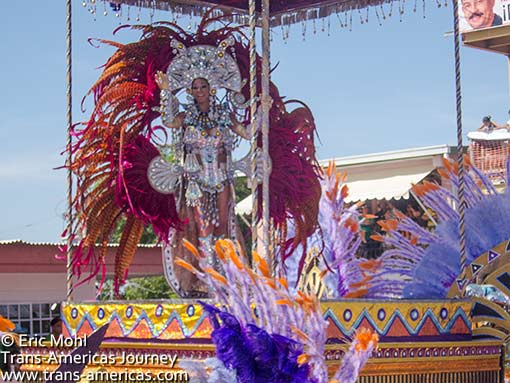 Maruquel Madelaine Gonzalez Valesquez, the Calle Arriba Carnival Queen in Las Tablas, Panama during daytime parades on Day 3. She’s making a mock “I can’t hear you” face because our compadres on the Thrifty viewing platform were yelling insults at her. 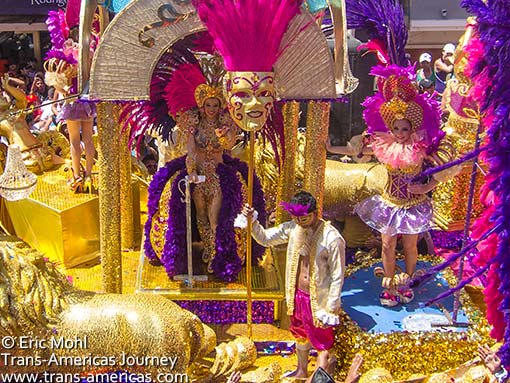 Ana Gabriela Rodríguez Vasquez, the Calle Abajo Carnival Queen during daytime parades on Day 3 of the party in Las Tablas, Panama. This was the first day that men were carried on the floats.

Tensions mounted on Day 3 of Carnival in Las Tablas, Panama as you can see in our video of the daytime parades, below. Check out Mr. Muscles in the scary dungeon master mask on the back of the Calle Arriba float just after minute six…

Do you really want all of this?

During Day 2 of Carnival in Las Tablas we got to meet next year’s Calle Abajo Carnival Queen. Her name is Daris Nicole Sanchez Brandao and amid the chaos, heat, and flying insults we had to ask: Do you really want all of this?

Nicole didn’t even hesitate in her response, however, her reason for wanting the work, responsibility, and pressure of being a Carnival queen in Las Tablas surprised us. “Being Carnival queen will bring my family together,” Nicole said in her impeccable English. “We all have to work together.” 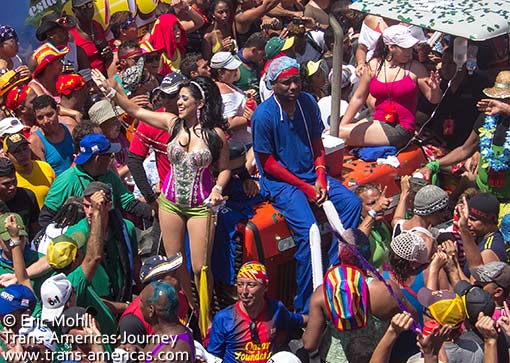 Daris Nicole Sanchez Brandao makes her debut as the next Calle Abajo Carnival Queen in Las Tablas, Panama during Day 3 of the celebrations.

In person Nicole looks like a diminutive cheerleader–pretty and athletic and approachable. When she made her official debut on the front of a tractor during one of the processions on Day 3 we hardly recognized her. During the day she appeared with teased hair wearing lime green hot pants and a bedazzled bustier. At night she showed up in a dress that was sparklier than a chandelier.

These official coming out appearances are called bodas (which also means weddings) and the crowd already seemed to love her. 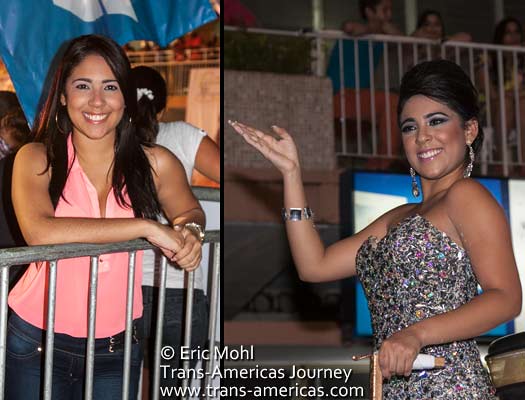 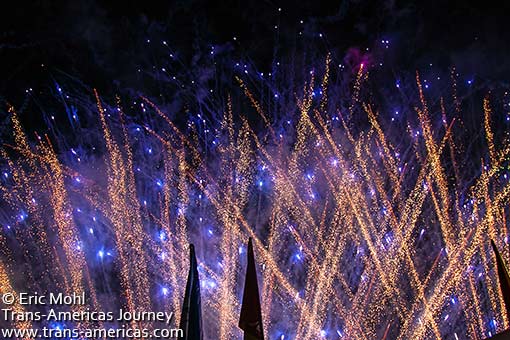 It wouldn’t be Carnival without an alarming amount of fireworks. 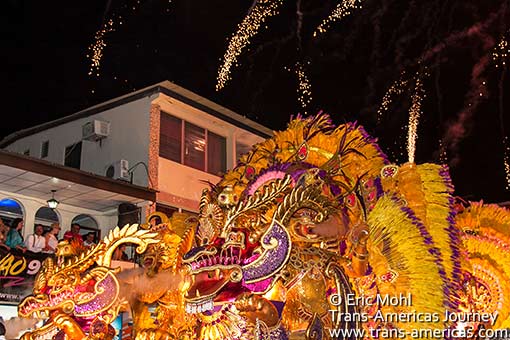 Calle Arriba’s second nighttime float during Day 3 of Carnival in Las Tablas, Panama. Their queen is in there somewhere… 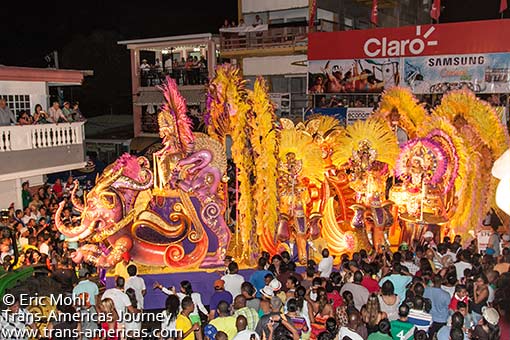 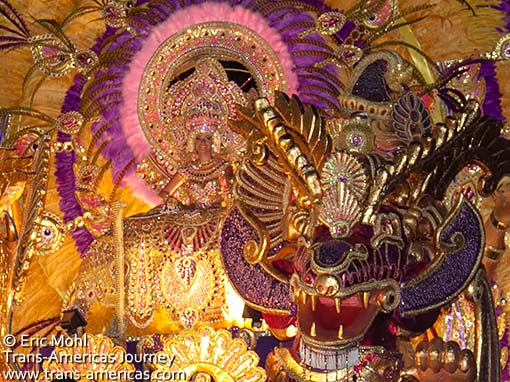 Maruquel Madelaine Gonzalez Valesquez, the Calle Arriba Carnival Queen in Las Tablas, Panama, on her elaborate nighttime float on Day 3 of the party. She is actually standing inside an enormous rigid skirt that juts out on either side of her body. Comfy. 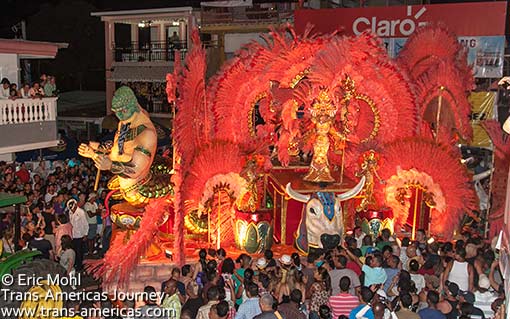 One of the nighttime floats from Calle Abajo during Day 3 of Carnival in Las Tablas, Panama. 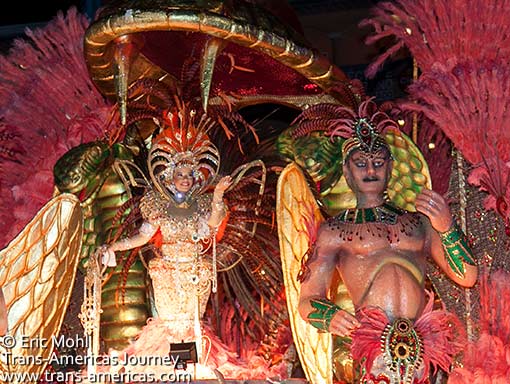 Ana Gabriela Rodríguez Vasquez, the Calle Abajo Carnival Queen, makes it look easy even though she’s standing inside a cobra’s mouth on a nighttime float during Day 3 of the party in Las Tablas, Panama. 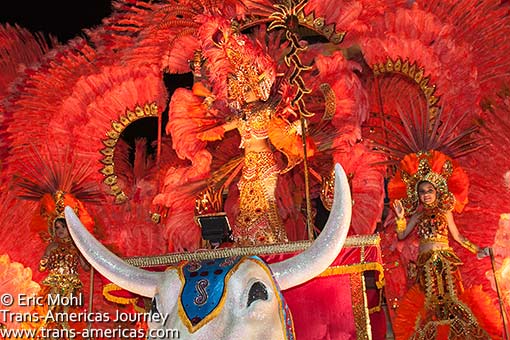 Just a few of the princesses that rode along with Ana Gabriela Rodríguez Vasquez, the Calle Abajo Carnival Queen in Las Tablas, Panama.

Floats and fireworks as Carnival celebrations in Las Tablas, Panama reach a fevered pitch during the nighttime parades of Day 3.