Not for the Fainthearted – Carnival in Las Tablas, Panama (Day 2)

Day 2 of Carnival in Las Tablas, Panama fell on a Sunday (as it always does), but that did not make this day of Carnival (aka Carnaval) celebrations a day of rest. 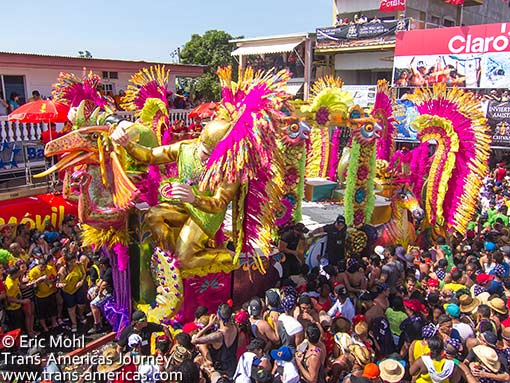 On Day 2 onlookers and participants started to show the strain of one of the biggest parties on the planet. Maybe the scorching heat had tempers flaring. Maybe we’d simply become attuned to it.

Or maybe the underlying tension between the two queens’ camps really had escalated. Their respective bands seemed to be playing their infectious ditties just a tad more aggressively. Supporters of each queen seemed to be tossing around insults more freely.  There were even a few punches thrown and some upchucking. It was not for the fainthearted. 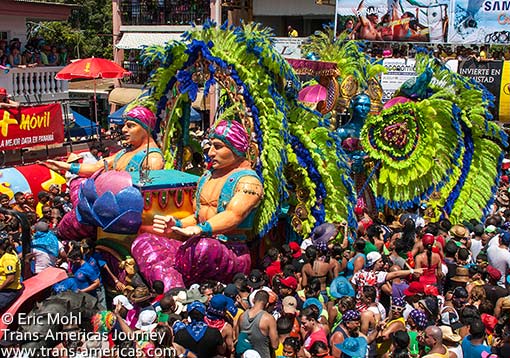 Break it up boys (and girls)

Shortly after a fresh set of elaborate Calle Arriba (uptown) and Calle Abajo (downtown)  floats had started their early afternoon laps around the square with their bedazzling queens and princesses on board, a massive fight broke out in the crowd below us. There was blood. Someone looked unconscious.

Before the cops could push through the crowd a few girls had joined in too. Interestingly, the crowd chanted “assholes” at the fighters ala the way a baseball game crowd taunts bad behavior in a stadium. Ugly as the fight was, it should be noted that this was the only violence we saw during all of Carnival. 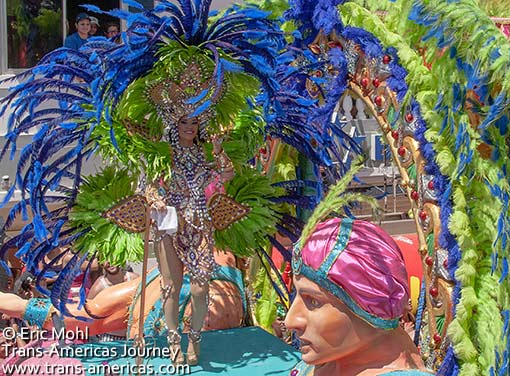 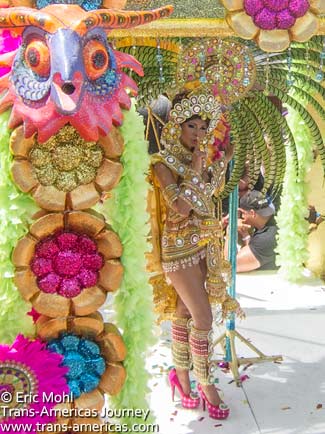 Immerse yourself in the fun of Day 2 of Carnival in Las Tablas, Panama in our video from the day time parades, below.

The Carnival shake and wave

By now everyone, not just the queens, had perfected their own version of the Carnival Shake and Wave which involves bouncing your knees while knocking your hips back and forth to the beat of your chosen queen’s big band jingle. You also have to keep one elbow bent at 90 degree angle and wave that hand in unison with your hips while keeping your fingers tight together like Barbie’s hands.

Did we mention the perma-smile? And occasionally blowing a kiss to the crowd? We have no idea how the queens did this for seven to eight hours a day (twice that on the final day). They deserved their crowns just for that. 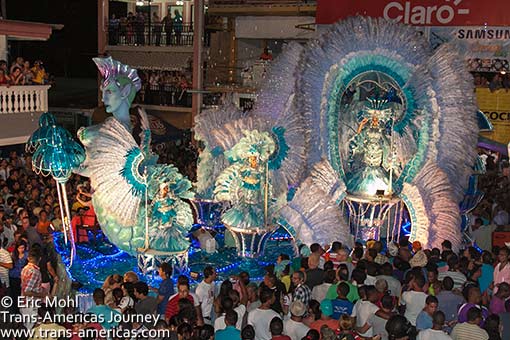 Calle Abajo’s first float of the night on Day 2 of Carnival in Las Tablas, Panama. The first float in night parades does not carry the queens. 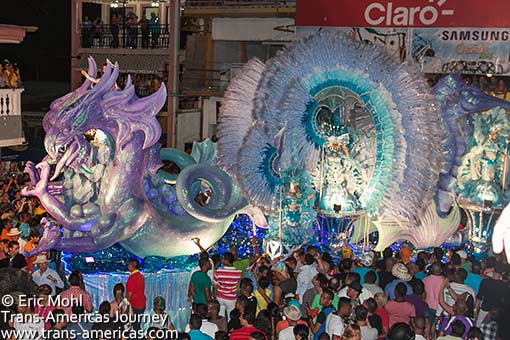 Calle Abajo’s second float of the night on Day 2 of Carnival in Las Tablas, Panama. Their queen is in there somewhere (look between the dragon’s heads)… 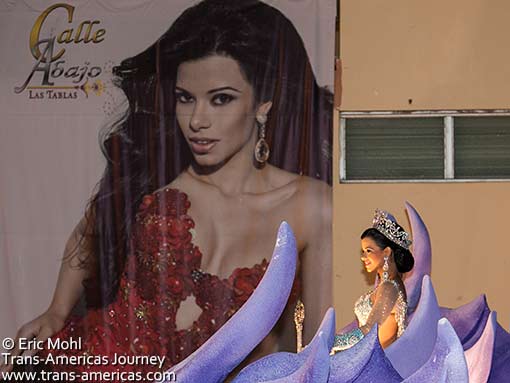 Calle Abajo queen, Ana Gabriela Rodríguez Vasquez, floats past an enormous poster of herself during night parades on Day 2 of Carnival in Las Tablas, Panama.

Even princesses throw up sometimes

While there’s no doubt about the physical stamina required for the queens to fulfill their waving, smiling, hip-bobbing, kiss-blowing duties the princesses that accompany each queen on the floats aren’t exactly on vacation either.

These courtesans, who apply for the job and must be able to pay for their own costumes, range from children to young women and they each wear their own heavy and uncomfortable costumes and head dresses, stand in their own high heels and do their own waving, smiling, hip-bopping and kiss-blowing.

The youngest ones are accompanied by one or both parents who walk along next to their child’s station on the float. Some are clearly stage moms who spend a lot of time urging their daughters to smile more or wave bigger. Sometimes it’s just too much, as was the case for a very, very small princess who wobbled a bit then hurled off the side of her float before her mom whisked her away. 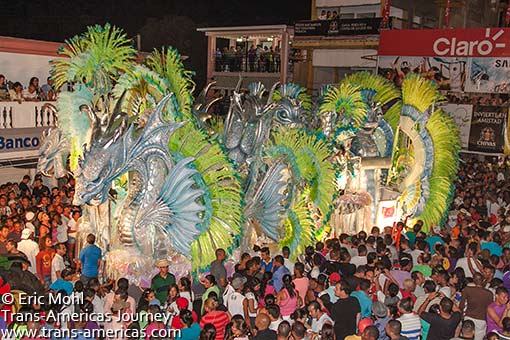 Calle Arriba’s first float of the night on Day 2 of Carnival in Las Tablas, Panama. The first floats in night parades do not carry the queens. 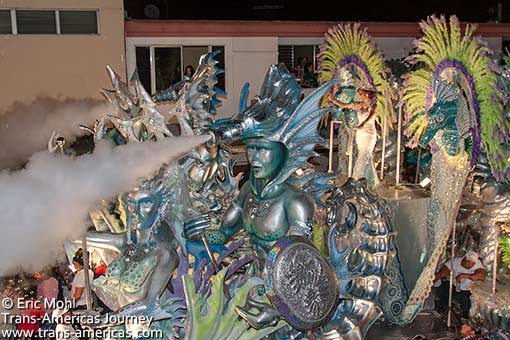 The second float of the night from Calle Arriba. The smoke-snorting dragon/seahorses were a big hit. 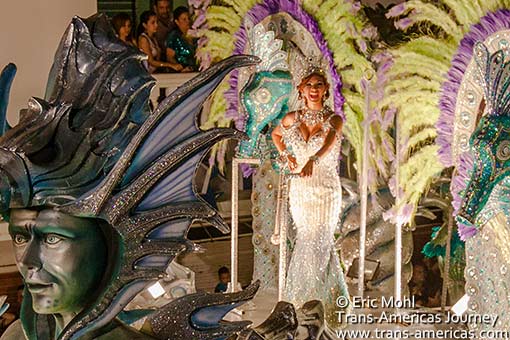 The Calle Arriba queen, Maruquel Madelaine Gonzalez Valesquez, finally looks our way from on top of her main nighttime float on Day 2 of Carnival in Las Tablas, Panama.

To get the full effect of these floats you really have to see them in action. That’s why we made this video for you from the night time parades on Day 2 of Carnival in Las Tablas, Panama.

Is that a burn hole?

By Day 2 the infrastructure was looking worn too. For example, following the closing fireworks mayhem on Day 2 we noticed that the shade tarp over the Thrifty viewing platform which we were standing on had a number of burn holes in it caused by falling fireworks embers. 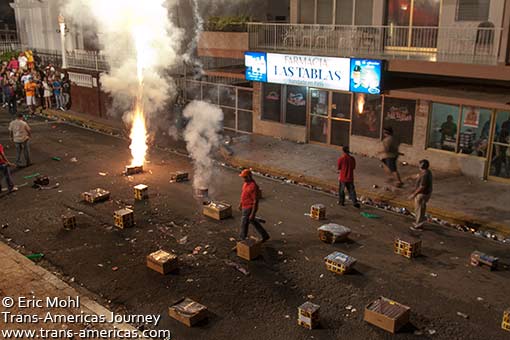 Those boxes are all filled with fireworks and that’s just a fraction of the stuff that went up during the night of Day 2 of Carnival in Las Tablas, Panama. 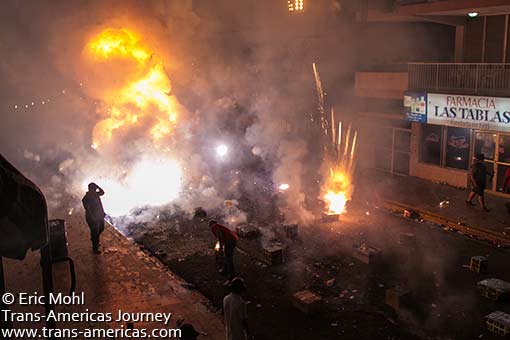 That guy is way too close to that enormous pile of erupting fireworks. 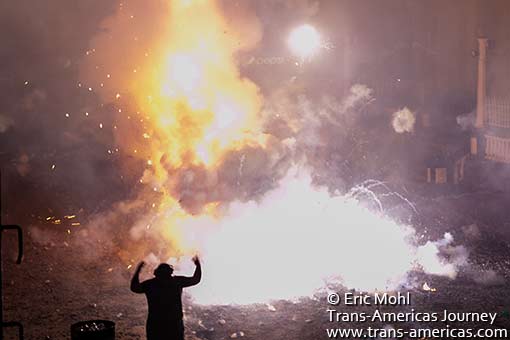 At least he’s got his ear protection on…