This is not hyperbole. Barichara is the prettiest town in Colombia. And we can prove it. 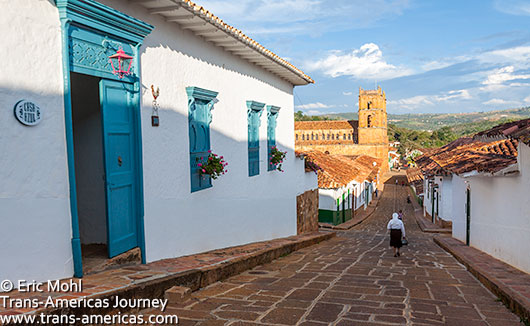 Yes, that’s a nun walking down a stone street flanked by perfectly restored colonial buildings. Baricahara is like that.

Welcome to Barichara, the prettiest town in Colombia

The Colombian government keeps an exclusive list of towns that retain their colonial architecture and traditional way of life. They’re called Pueblos Patrimonios (Patrimonial Towns) and, as we write this, there are only 17 of them in the entire country. Sixteen of them are great. Barichara is amazing. 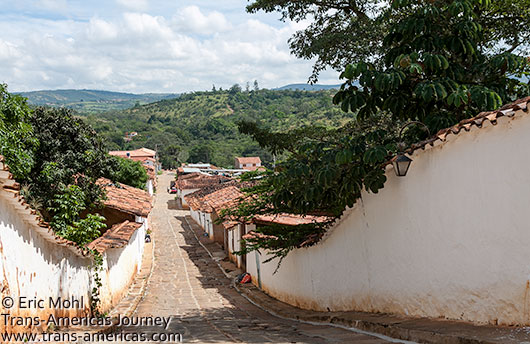 Another impossibly atmospheric street in Barichara.

For one thing, Barichara is dead gorgeous. While many towns in Colombia, and certainly every Pueblo Patrimonio town, have sections where colonial architecture remains along with a charming sense of history, in Barichara every single adobe building, every terracotta roof tile, every stone street, every window box has been restored and maintained. 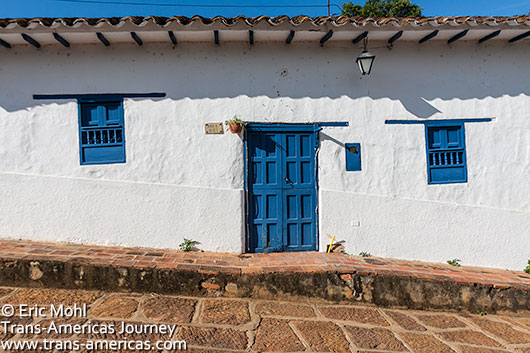 History never looked better than it does in Barichara.

To be honest, the perfection is so pervasive in Barichara that it can feel a bit fake. We half expected actors in period costumes to leap out of windows to a Disney-esque soundtrack. That never actually happened. Thank God. 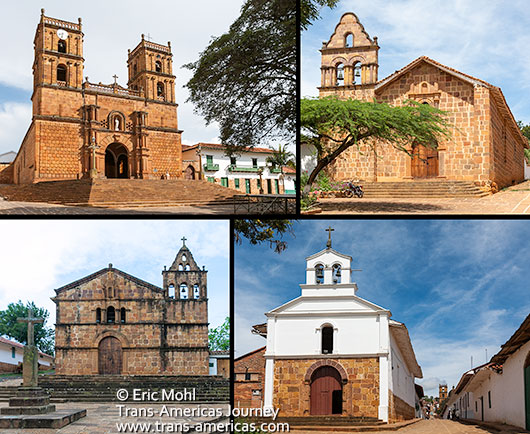 For a small town, Barichara has more than its share of stone churches as well and they come in many shapes and sizes including the Church of the Immaculate Conception (built in 1883 and featuring a gold-leafed altar), the petite Chapel of San Antonio, and the Santa Barbara Chapel. 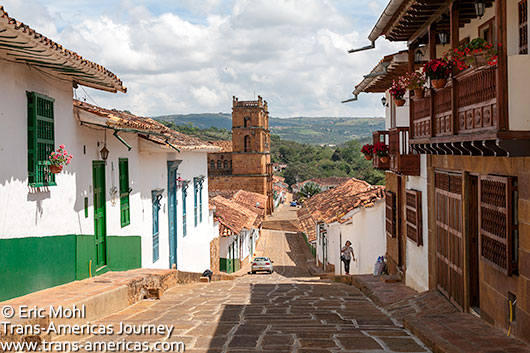 The streets of Barichara are so camera-ready that many movies and TV shows have been filmed here.

Barichara is also just the right size–small enough to be peaceful, but large enough to offer a range of hotels, restaurants, locals’ hangouts, shops, etc. This attracts a lot of Colombians as well as foreign travelers and Barichara can be hectic on the weekends when Colombian families and stylish city dwellers come to town. 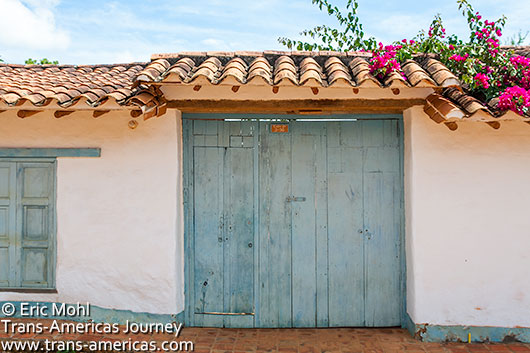 Even a simple doorway takes on something romantic and irresistible in Barichara.

Visit Barichara during the week, however, and you may feel like you’ve wandered onto an abandoned movie set with shuttered shops and deserted streets. That has its own sort of appeal.

Hiking the Camino Real and eating ants in Barichara

Gawking at architecture and soaking up the ambiance are great ways to spend time in Barichara, but there are two other unique things to do while you’re in town. The first involves walking in the footsteps of the conquistadors. 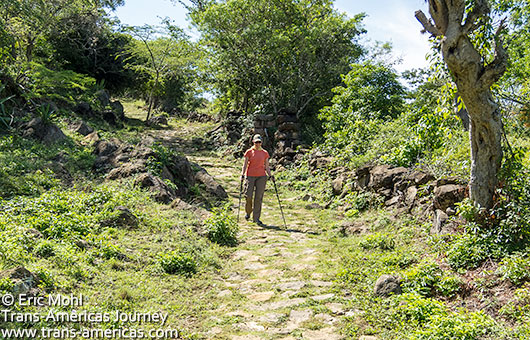 Karen walking down the Camino Real from Barichara to Guane.

The Camino Real was a network of roads built by or taken over by the Spanish as they conquistadored their way through the Americas. Many section of the original wide, stone Camino Real still exist, including a 5.5 mile (9 km) stretch from Barichara down to the town of Guane.

It is a beautiful and peaceful walk (allow about two hours) as the Camino Real, which was built by the local Guane Indians before the Spanish began using it, meanders gently downhill past fields and small farmhouses to the tiny, tranquil town of Guane. Keep your eyes open for birds and for ammonites along the way.

In Guane you’ll find a quiet plaza, a church, some signs claiming goat’s milk is better than Viagra, an archaeological museum, and plenty of places to get a celebratory beer. If you don’t want to hoof it back up to Barichara you can hop on a local bus. 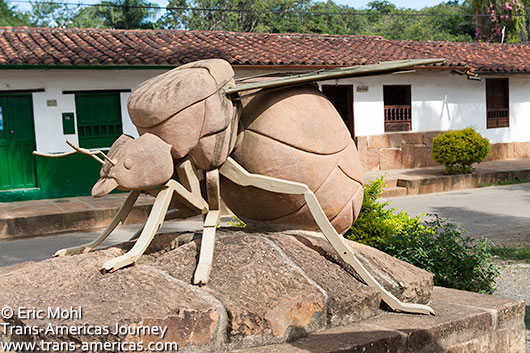 This sculpture of a fat bottom ant, a local delicacy, greets visitors to Barichara.

The second very Barichara thing to do involves eating ants. On purpose. And not just any ants. Oh, no. These are hormigas culonas (fat-bottom ants). They show up around April every year and people collect and roast them with gusto. Some say they’re an aphrodisiac which may or may not explain the giant ant sculptures at one end of town.

You can sample ants in many forms in Barichara including packets of roasted ants and dishes made with ants. We ate a dish of goat in a fat bottom ant sauce at Restaurante Las Cruces which is part of the Fundacion Escuela Taller Barichara which works to teach and retain traditional artisenal skills, including cooking. Honestly, the ant sauce tasted like dirt. Read more in our story about eating ants for The Latin Kitchen. 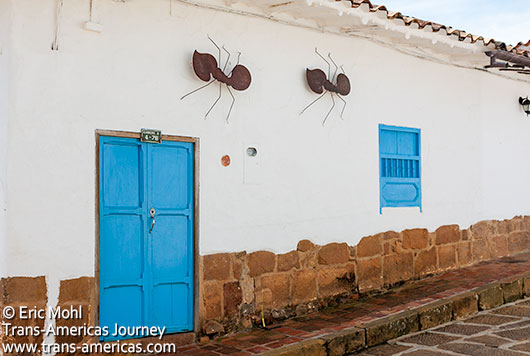 In Barichara ants are everywhere, including in some of the food.

Where to sleep and eat in Barichara (minus the ants)

As previously mentioned, there’s a wide range of hotel options in Barichara. We chose La Nube Posada boutique hotel in search of a modern take on the colonial style in Barichara and we were not disappointed.
Book Now 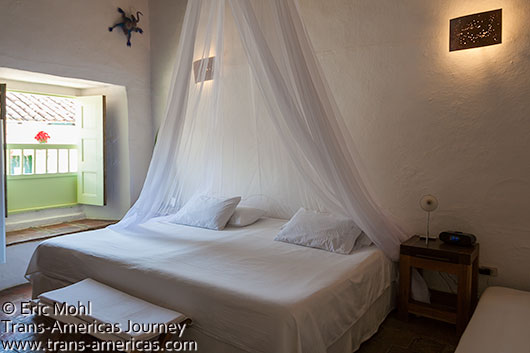 There are just five rooms at Posada La Nube which brings a welcome element of clean, crisp style to Barichara.

Opened in 2009, this hotel has just five small but stylish rooms arranged around an open central courtyard. The place is full of modern art and the decor is crisp and clean inside the colonial structure. There’s also a lush back garden where meals are served. Breakfast featured French Press coffee, homemade granola, and some lovely traditional plates featuring tamales or scrambled eggs with shredded beef and arepas. The owners also run the nearby Suite Assul in a completely renovated house with a pool and multiple bedrooms. It can be rented in its entirety or room by room.
Book Now

Run by chef Maximo from Rome, Ristorante Italiano Al Cuoco is the place to go for homemade pasta and amazing sauces, all blissfully ant free. It can be tricky to find, so ask a local. 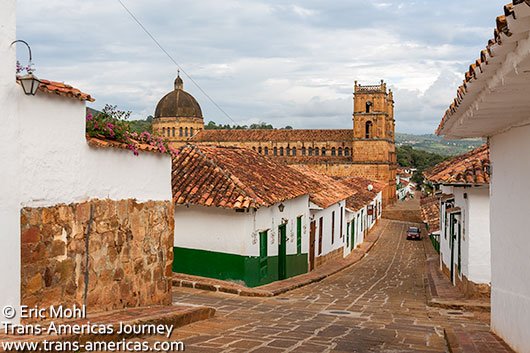 One last shot from beautiful Barichara.