Salento is not a secret. Lots of travelers to Colombia visit the mountain town above the gorgeous Cocora Valley every year. Locals love it too. After spending weeks in Salento over four separate trips, we’ve got your insider’s travel guide to paradise including a great new hotel, the smartest days to visit, and where and how to see the best of the area’s famous wax palms (it’s not where you think). 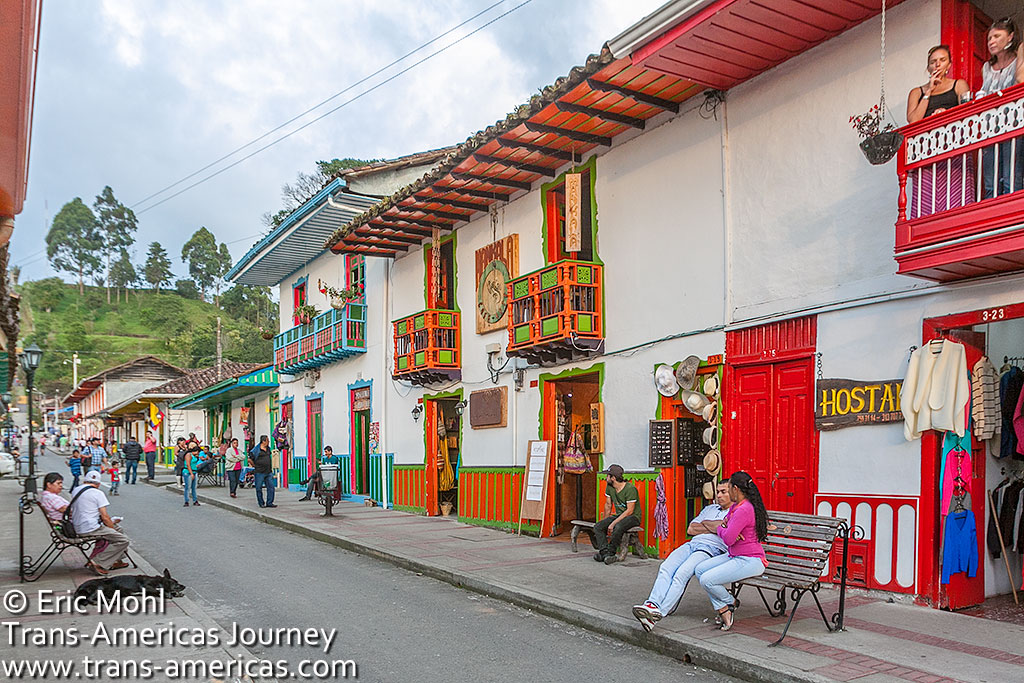 Traditional architecture and a laid back vibe bring many travelers–foreign and Colombian–to the mountain town of Salento.

Salento was founded in 1850 and proudly wears its badge as one of the oldest towns in Quindio province. The more charming parts of town take you back in time with cobble stone streets, meticulous traditional paint jobs on original adobe buildings with terracotta roof tiles and fire-engine-red geraniums everywhere. In 2011 UNESCO named a large swath of Quindio province, including Salento, as a “Coffee Cultural Landscape”. 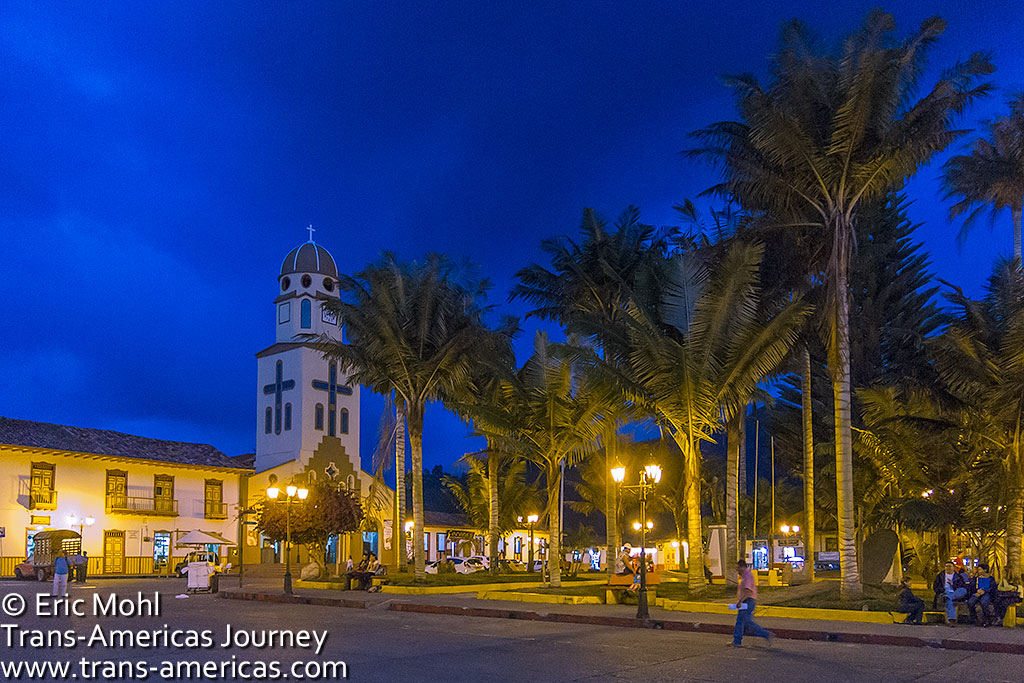 The main plaza and church in Salento, Colombia.

Salento is like a smaller, more tranquil version of the town of El Jardin except on weekends when Salento bursts at the seams as Colombian visitors descend on town creating traffic jams in the main plaza, filling hotels (some charge higher rates on weekends), and jamming the pedestrian street lined with shops selling everything from coffee to hats. On weekdays the town slips back into a more sleepy pace, so our first Salento travel tip is: avoid weekends if you want a more peaceful experience. 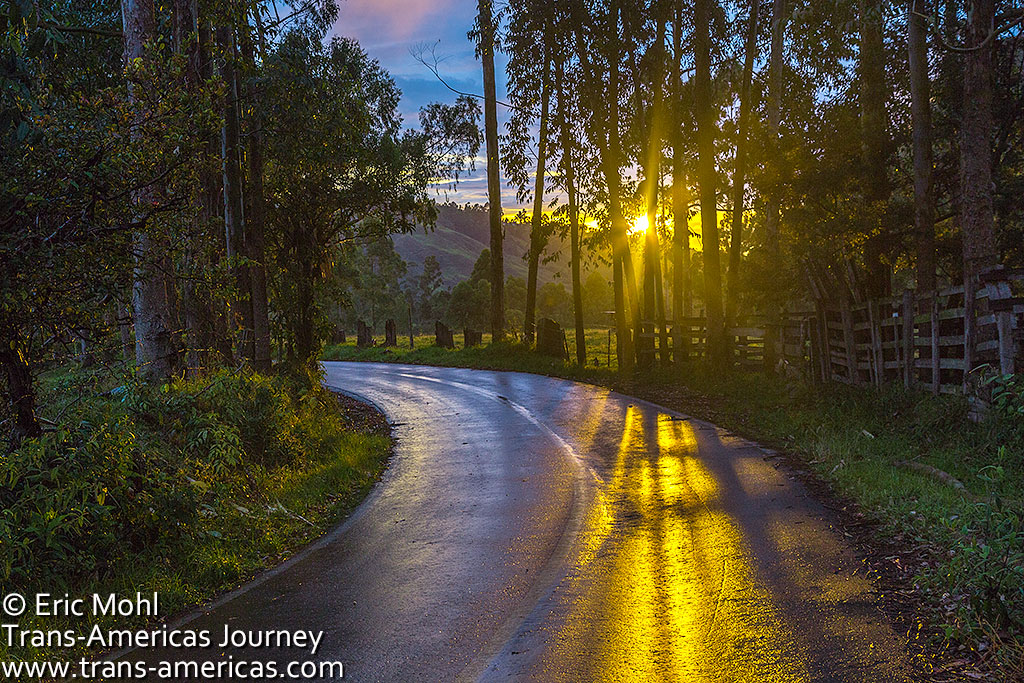 The road into the Cocora Valley from the town of Salento, and it just gets more and more gorgeous from here.

There are plenty of things to do in Salento including hiking, biking, horseback riding, shopping, coffee touring and tasting, playing an explosive (literally) Colombian bar game called tejo, and there’s even a zip line now. But the real reason you’re there is to see the famous wax palms of Salento, right? 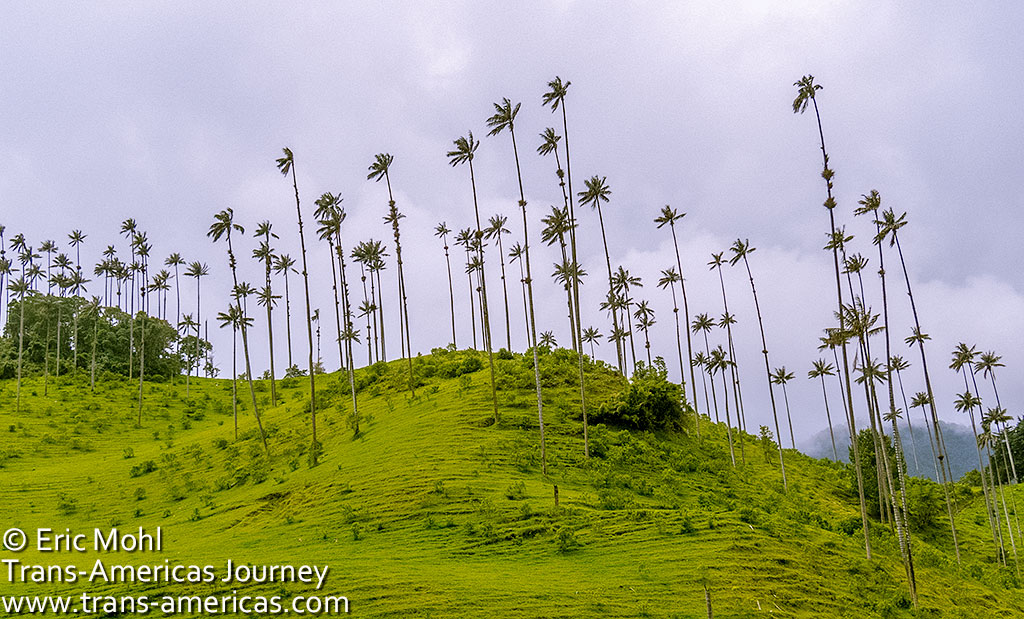 Wax palms in the Cocora Valley below Salento.

Wax palms are a distinct species found only in the Andes in parts of Colombia and Peru. They are the tallest palm in the world and most grow to about 150 feet (45 meters) but some shoot up to 200 feet (60 meters). They’re also the national tree of Colombia. 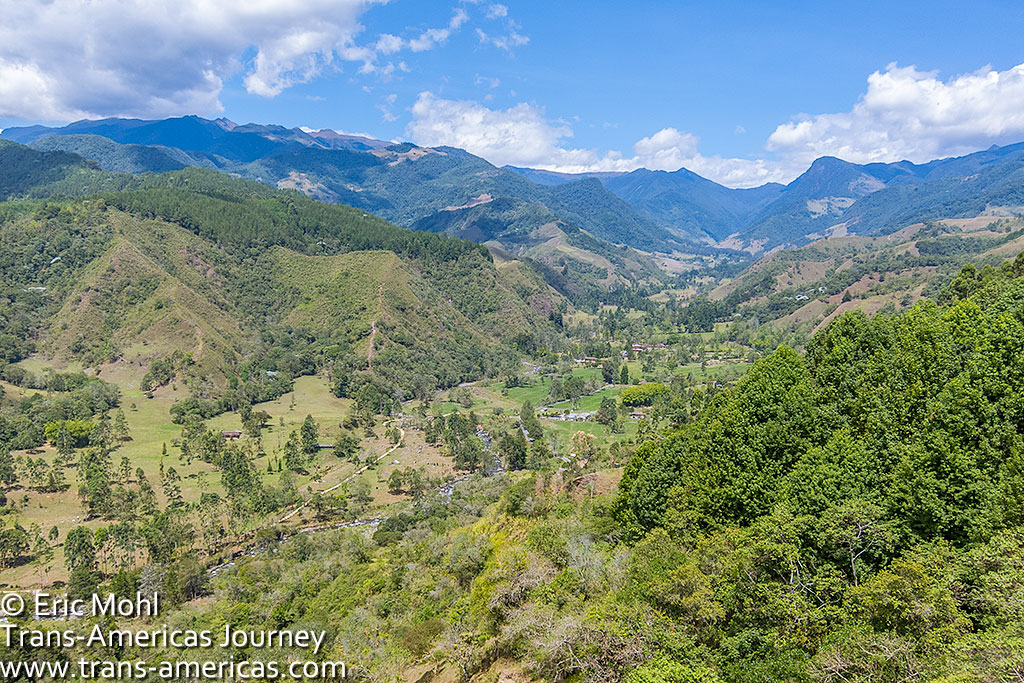 The Cocora Valley unfurls below Salento.

Salento sits on a ridge above the Cocora Valley which is home to some of the few remaining stands of wax palms. Most visitors take a shared jeep taxi from town down into the picture perfect valley a few miles away: green pastures, rolling hills, an ambling narrow road, babbling brooks, historic haciendas – it’s got it all. See what we’re talking about in our drone travel footage of the Cocora Valley, below.

At the head of the Cocora Valley there’s a five hour loop trail which winds through small stands of the palms. It’s picturesque and the palms are stunningly tall, like the giraffes of the palm world, but these most famous wax palms are not the best examples on offer. 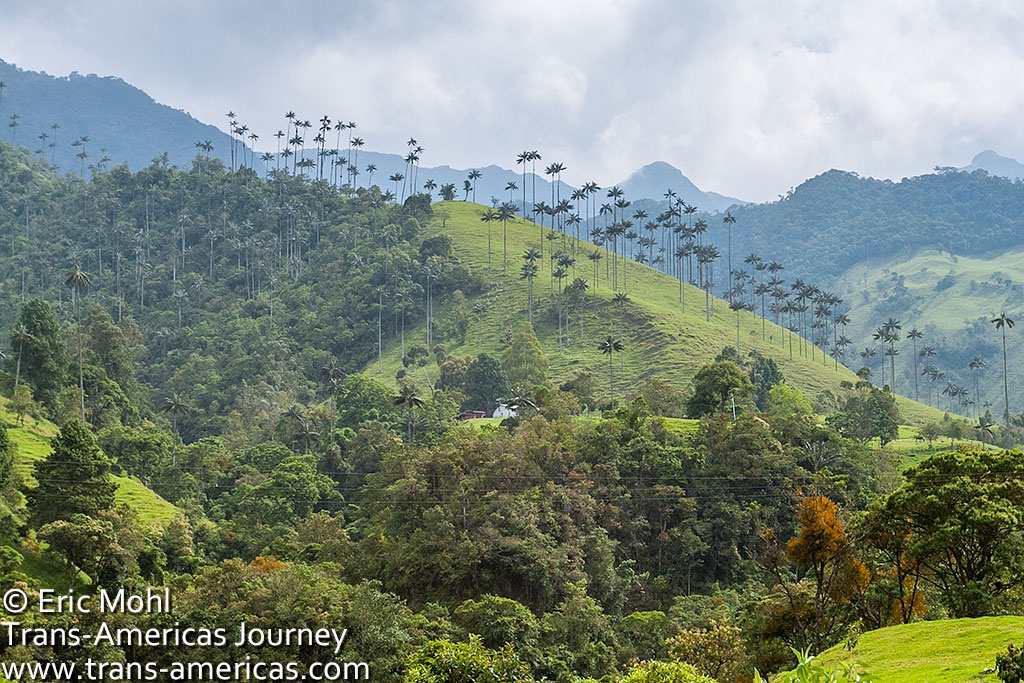 Wax palms in the Cocora Valley.

It wasn’t until our second or third visit to Salento that we learned that the Cocora Valley wax palms are nothing compared to the even more amazing palms that exist in a neighboring valley on and around a finca called La Carbonera. How do we know this? Because we’ve been adopted by a magical Colombian auntie (Hi B! We miss you!) and her family owns La Carbonera. 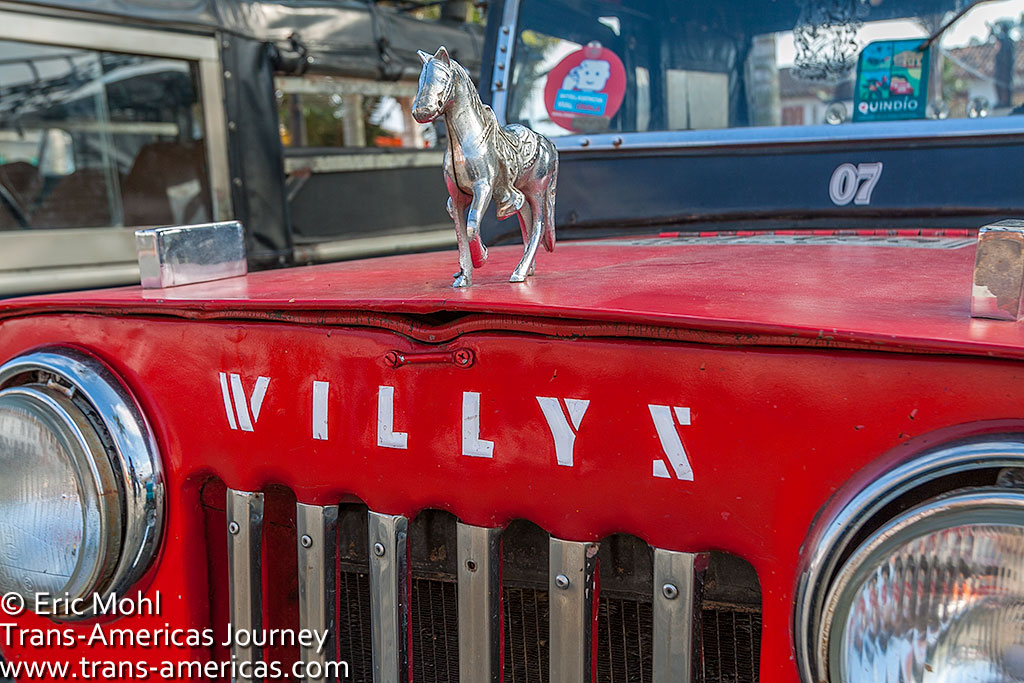 Classic Willys Jeeps are used as taxis in Salento.

She took us to La Carbonera, which is located about about 1.5 hours from Salento on a road that includes parts of the Camino Real which Latin revolutionary hero Simón Bolívar traveled along between Ecuador and Nicaragua. So here’s our next Salento travel tip: hire a jeep taxi and driver in the main square to take you to La Carbonera. Be ready for a bumpy, dusty ride, but it’s worth it (150,000 COP or about US$50 round trip for the whole jeep which will seat 5 people in addition to the driver). 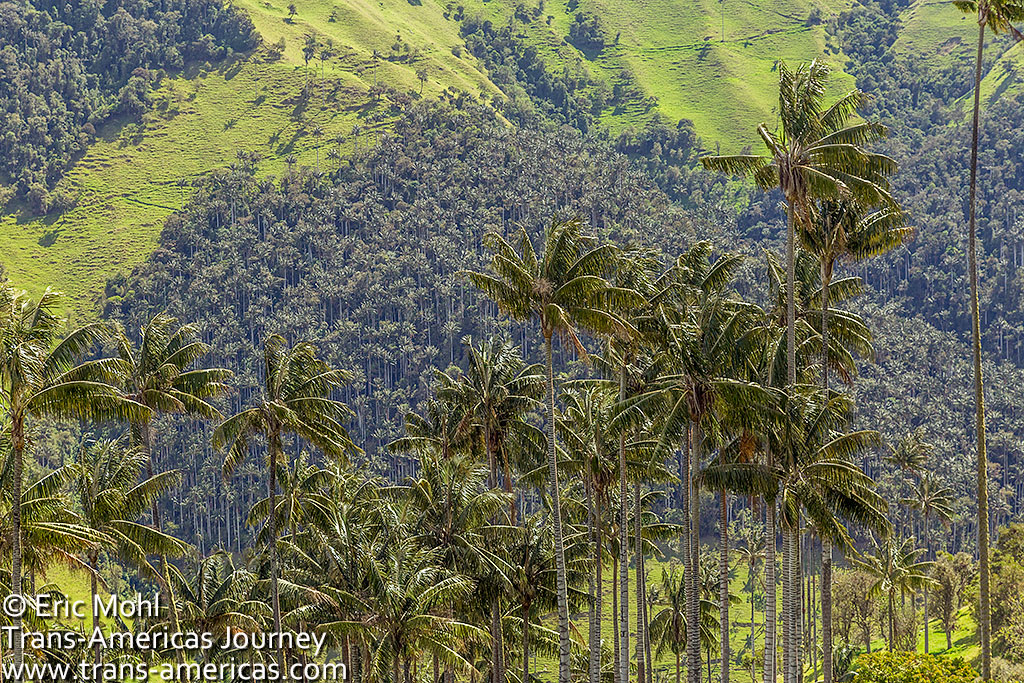 Travel tip: the wax palms on the road to a finca called La Carbonera are much denser and more impressive than those in the Cocora Valley and we can tell you how to get there.

Right from the road to La Carbonera you will see thousands of wax palms clumped in large, swaying stands which blow the palms in the Cocora Valley out of the water.

What to eat and drink in Salento

Small trout farms are abundant in the area and many restaurants sell trout in various forms. Another Salento travel tip: you will see trucha al ajillo (trout with garlic) on menus everywhere. Be aware that this dish is not simply trout cooked in garlic. Your fish will come smothered in a milky, mildly garlicy sauce. Just so you know. 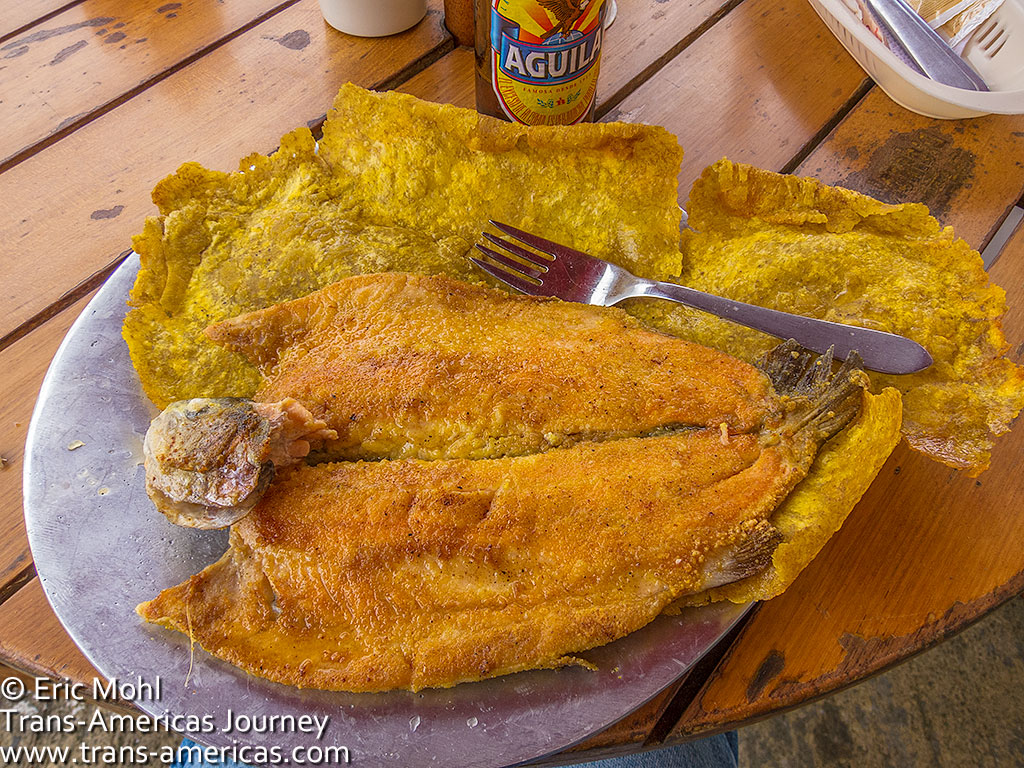 Fried trout on a platter-sized patacon is a common (and delicious) dish in Salento.

Dairy products are also huge in Salento thanks to sprawling cattle farms. Get some local cheese, then head to the small supermarket on the main square, walk to the back near the produce section and look for baskets of small baguettes made daily by a local woman. Yep, that’s another tip. 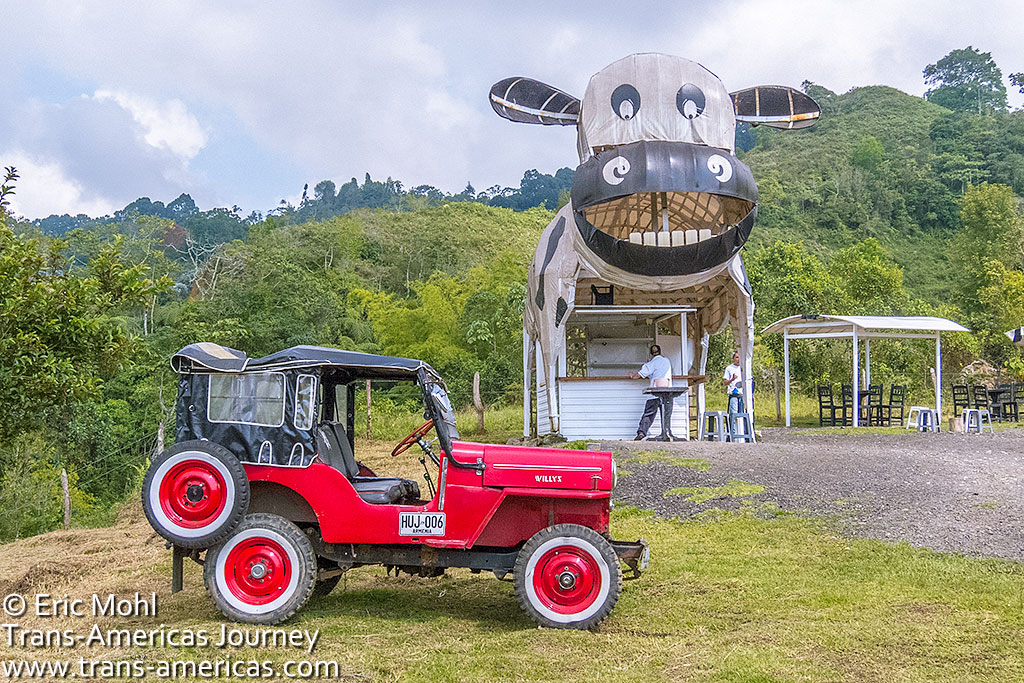 Many diary products are produced in and around Salento and some are sold at this creative road side stand on the way into town.

Whatever you do, don’t leave town until you’ve tried a patacon. Usually, patacones are thick discs of boiled, pressed, then fried plantain which come as a common side dish. In Salento, a patacon is a very thin, crispy version the size of a dinner plate which is topped with cheese, chicken, trout, etc. and garnished with rich hogao which is a common Colombian sauce of chopped and simmered vegetables. You won’t find this delicious dish in many other parts of Colombia and we still crave it from time to time. 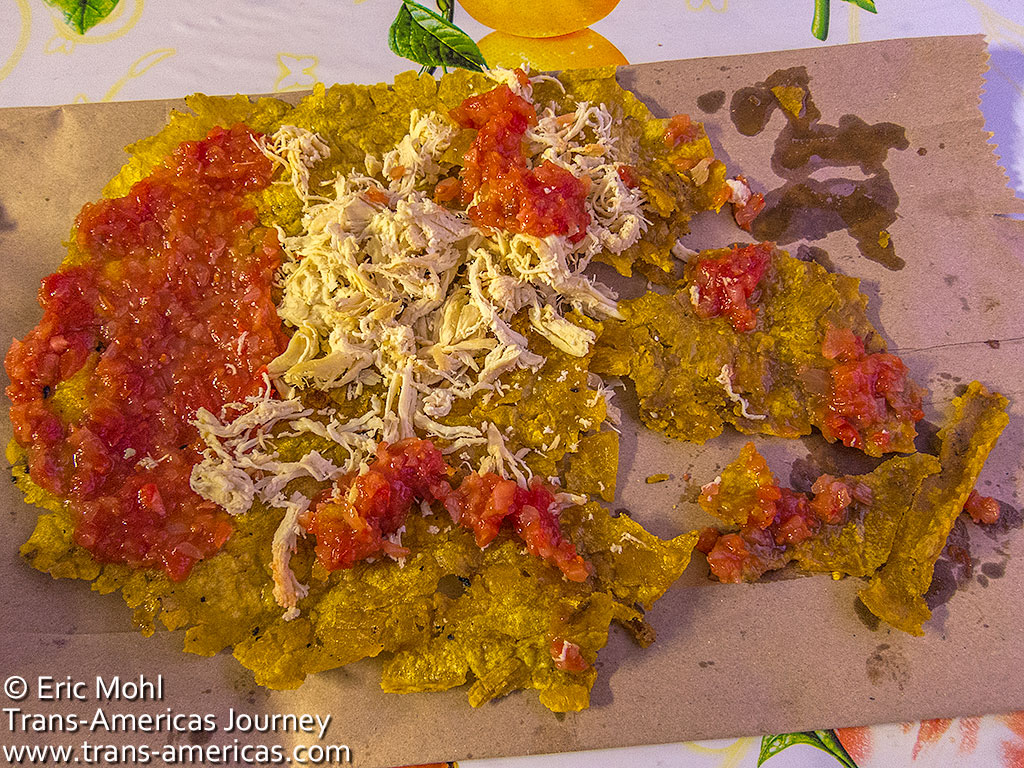 Salento is in the so-called “coffee triangle” so there are lots of area coffee producers (some offering tours of their farms and facilities) and many cafes in town. We liked Cafe Bernabe Gourmet because the coffee was good and so was the art on the walls. Another solid place to caffeine up is Cafe Jesus Martin.  We liked their coffee so much that we bought a few bags of beans to keep with us in the truck for future use in our beloved Bonjour insulated French Press. 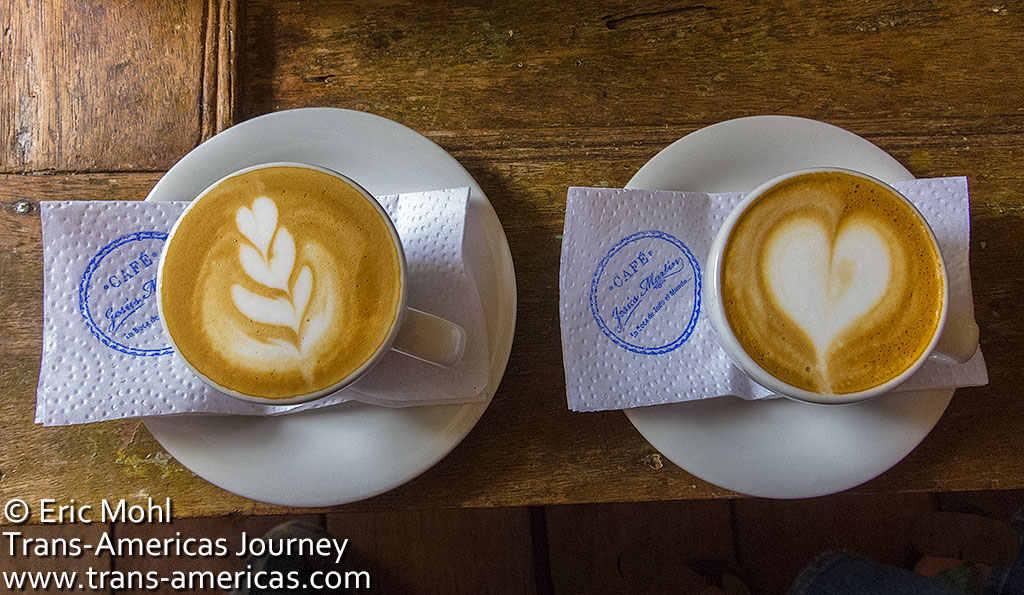 Excellent coffee at the Jesus Martin cafe in Salento.

On weekends, open air bars open around the square under tents and they’re a great place to grab a beer and watch Colombian families. Speaking of beer, if you’ve been looking for an opportunity to play tejo, Colombia’s beloved bar game, you can do it in Salento. Here’s where to play tejo in Salento.

On the weekends enterprising locals push Colombian kids around the main plaza while their parents relax in the casual restaurants and bars around the square.

Where to sleep in Salento

There are more than 70 hostels and hotels in little tiny Salento, so choice is not the problem. During our very first visit we stayed at the stylish and peaceful Hostel Tralala, just off the main square, which has a dorm, two lovely shared kitchens which include free coffee, there’s a casita off the garden, and a handful of private rooms (70,000 COP or about US$24 for a private double with bathroom/60,000 COP or about US$20 with shared bathroom).
Book Now 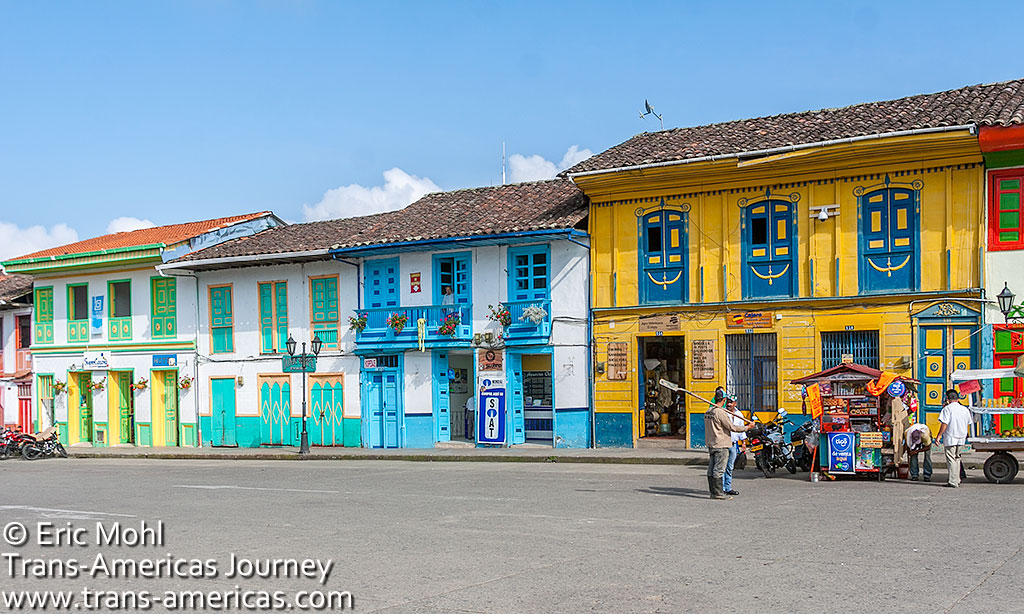 We also spent a few days in a one room apartment outside of town which is rented by Maria Clara who also bakes those baguettes we recommended above. It’s sunny, clean and comfortable with a large porch with a hammock. It’s a great option for families or those staying longer term, but her current rates are a bit steep for us at 120,000 COP or about US$40 per night, contact Maria Clara at claragarciamar AT hotmail DOT com or call 3133717249, she speaks English).

We also stayed at La Floresta Hostel which has a parking lot and basic but fairly clean rooms and a filthy shared kitchen (55,000 COP or about US$17 per night for a private double with bathroom, there’s also a camping area and dorms).
Book Now 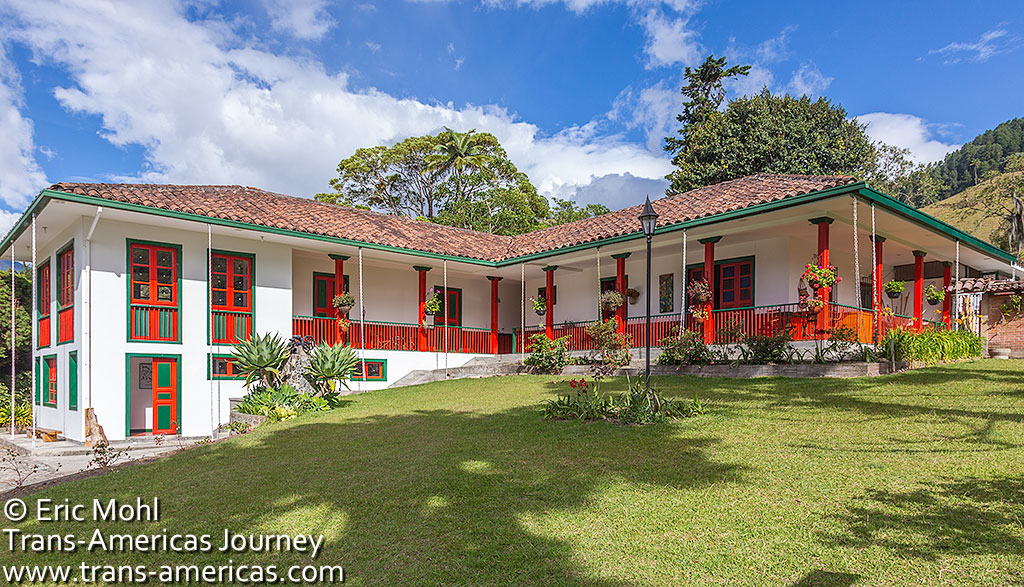 Reserva El Cairo Hotel is a lovely new addition just a few miles from town in the Cocora Valley.

During our most recent visit to Salento we were delighted to tour the new seven room Reserva El Cairo Hotel. Located 2 miles (3 km) outside of town in the Cocora Valley (taxis are common and cheap), this hotel is peaceful and combines sustainability with traditional architecture. The restored building, formerly a private house, is more than 100 years old and rooms now have modern bathrooms and good beds plus a basket full of locally-made snacks. Staff members speak English and they’re passionate about service. They grow their own organic fruits and vegetables and produce their own milk, butter, eggs and chickens on their 100 acres (40 hectares) of land.
Book Now

Other good accommodation options in Salento include Hostal Ciudad de Segorbe, The Plantation House and La Posada de Cafe which is located right on the pedestrian street off the main square.

Despite the importance of Salento and the Cocora Valley as a tourist destination, the area’s UNESCO site status, and it’s standing as home to the country’s rare national tree, there’s a new plan afoot that would allow open pit mining for gold in the region. There is local backlash, so stay tuned.