8 Things That Are Different in Belize

Crossing borders is always an exercise in change. That’s why we do it. What struck us most when we traveled across the border from Mexico into Belize was the heat. You may say heat knows no borders but trust us when we tell you that it was instantly hotter on the Corozal, Belize side of that invisible line. Here are eight more things that are different in Belize. 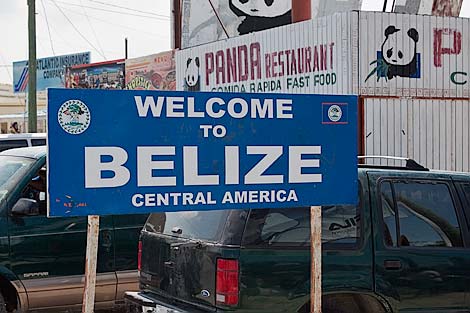 Entering Belize, where things are different.

8 things that are different in Belize

We were FINALLY in Central America after more than three years on the road in North America.

Things were instantly in English. Belize was, after all a British colony for years (ever heard of British Honduras?) and one of the things the Brits left behind was their language. We’d be lying if we said it wasn’t a relief to be able to read signs and say hello without struggling with our mediocre Spanish.

Gasoline and diesel were wicked expensive. The second you cross the border into Belize, and throughout the country as well, fuel prices sky rocketted. Luckily, we knew that and we filled up before leaving Mexico.

Sending a postcard was cheaper. Postcard stamps to the US and the UK are much cheaper in Belize than in Mexico (US$0.30 in Belize vs. US$0.80 US cents in Mexico).

Our XM satellite radio signal kicked the bucket just south of Tulum, Mexico, however, Sirius still worked in Belize. Go figure. Without our XM, we were forced to flip the radio dial between the three Belize radio station which played either religious music, Jamaican dancehall music, or an irrationally enthusiastic array of ’80s music.

The time changed. Although neighbors, Belize and Mexico are not always on the same time. In the summer months Belize is an hour earlier than Mexico.

Central plazas disappeared. Driving away from the actual border we passed through a number of small towns, all of them lacking the central church-dominated town square we’d come to use as a kind of geographic touchstone in Mexico where every town has one.