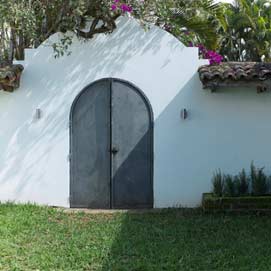 “If you don’t like espresso find another hotel,” says Roberto Sargogo, co-owner and chef of Casa ILB (now called Nico Urban Hotel) and Ristorante Il Bongustaio. But we are not in Italy. We are in San Salvador the capital of El Salvador where Roberto, an Italian transplant, and his partner Cristina Penalva, have created an unexpected but oh-so-welcome haven of Italian design, style and flavors at a price you won’t believe.

The five room, high-design boutique hotel opened in February 2011 in a former private home. Already architecturally suited to a hotel format, the building needed almost no re-construction to convert to a spacious, gracious hotel. Extremely open and light-filled Suite 1 was originally the living room. Even larger Suite 2 was the master bedroom and it features a sexy red wall, a sprawling, natural light filled bathroom and an enormous walk in closet. 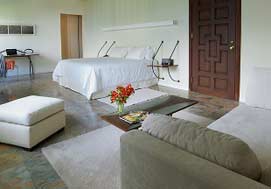 This suite is often booked for extended stay guests (stays of more than 10 days get an incredible rate of just $108 a night).
Suite 3, with a raised sitting area and mellow, muted tones was the beauty salon and dressing area of the home. Marginally smaller (and slightly less expensive), Suites 4 and 5 were guest rooms in the original house.  All bathrooms feature slate tile showers with rain shower heads and L’Occitane products.

Though major reconstruction was not necessary, Roberto and his architect have managed to put their stylish stamp on the building. The hallway is now illuminated by bulbs dangling from short wires a foot up from the floor—creative use of what’s normally an electrician’s tool to test that sockets are live. The furniture, which elegantly combines wood, metal, glass and slate as well as shots of sensual color, was designed by Roberto and made by him as well. There are lovely linens throughout from delicate monogrammed napkins to soft but substantial sheets on one of the most comfortable hotel beds in Central America.

During the conversion, a central sitting area was carved out and now serves as the hotel’s Living Room. It’s a welcoming, breezy space that conveys that elusive feeling of home so effectively that I was tempted to wander into the Living Room in my bathrobe to graze at the daily breakfast buffet (I resisted).

Most members of the staff have been with Roberto for a decade or more and it shows in the easy, attentive service. If the sun creeps onto your place setting on the patio before you’ve eaten breakfast the staff moves it to a shady spot. You will never find the espresso maker wanting for homemade cookies or supplies of El Salvadorian Kaaps coffee.

Casa ILB is located in Colonia San Benito where your neighbors are international embassies, other lovely homes and some of the chicest shops and restaurants in San Salvador. Not that you’ll be in the market for restaurants.

Though the hotel is relatively new, Ristorante Il Bongustaio has been in business for 17 years serving traditional Italian dishes based on recipes Roberto learned from his grandmother.  The restaurant has established a reputation with both locals and visitors as one of the best fine dining options in the country.

Start the night off at the hotel’s chic and intimate Gin & Tonic Bar which features 17 different gins.  Why? Because Roberto loves gin. Not surprisingly, the bartender (who has worked with Roberto for nine years) makes a perfect dry gin martini.

Once seated in the adjoining restaurant, with is open along one entire wall to make the most of views of an expansive landscaped backyard, the real work begins. The hand written menu is divided into the traditionally-Italian Antipasti ($9-$17), Primipatti ($9-$18.50), Secondi ($14-25) and Contorni ($5) courses and each course featuring at least 10 choices from fish to pork ragu.

I enjoyed shockingly fresh grouper carpaccio, salmon tartare with a light orange-infused mayonnaise which transformed this oft-made dish, delicate homemade tagliatelle with sweet lobster and shrimp, homemade gnocchi with clams and mussels, homemade spaghetti with squid and rich squid ink and a mango ice cream so pure it tasted fresh from the tree.

An ever-changing selection of fantastic modern art puts the finishing touches on this winner of a hotel. During my stay my favorite pieces were a pair of paintings in the Living Room by local artist Cornejo. Depicting two beautifully hip young women sporting Mickey Mouse ears and hands, they set the perfect tone for the hotel: unexpected, playful but always, always sleek and modern.