Where to Drink Craft Beer in Medellin – Medellin, Colombia

Thirsty traveler’s rejoice! The craft beer scene in Colombia is booming. While Colombia’s biggest microbrewery, Bogota Beer Company, got a lot bigger earlier this year when it was purchased by Anheuser-Busch InBev, there are still plenty of truly independent, up and coming craft breweries in Colombia, including four in Medellin that have small brew pubs and offer microbrewery beer tours and tastings. Here’s where to drink craft beer in Medellin. 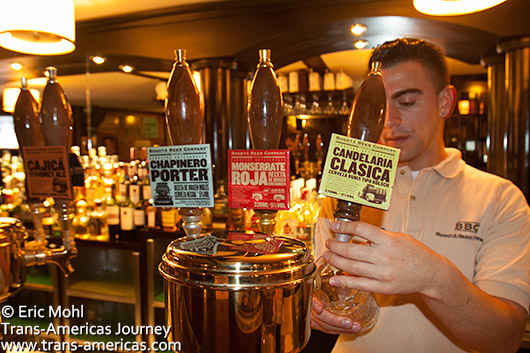 Where to drink craft beer in Medellin, Colombia

The folks behind Cerveza Premium Apóstol, which opened for business in 2009, are serious about beer. Very, very serious. The brewery produces 106,000 gallons of beer per year and their weekly brewery tour not only explains the basics of how beer is made but the guided tasting which follows each tour provides the basics of how to appreciate, drink and even pour your beer.

During the post tour tasting, each of Apóstol’s German style beers, which are made by a brew master who trained in the US, are introduced and explained including color, ingredients, flavors, optimal serving temperature, and even which type of beer mug or glass will bring out each beer’s unique fragrances and flavors. You will leave feeling smarter about beer. 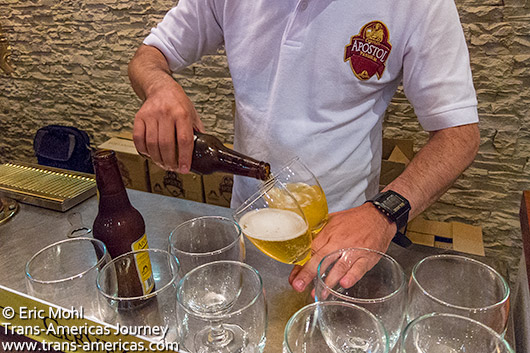 Apóstol microbrewery in Medellin is VERY serious about beer.

Do it: The three hour brewery tour and tasting at Apóstol is offered every Thursday starting at 6:30 pm on the dot (20,000 COP/about US$6.50 including the tour and the tasting, Spanish only, though English language tours are available for groups of 20 or more). Reservations highly recommended.

The 3 Cordilleras brewery is named after the Andean mountain ranges (cordilleras in Spanish) which run through Colombia. The brewery started production in 2008 and currently makes five beers including an amber ale called Mulata, a wheat beer called Blanca, an IPA called Mestiza (Karen’s favorite), a dark beer called Negra, and a Rose beer infused with fruit.

After touring the downstairs brewery, outfitted with equipment bought from a brewery in Portland, Oregon, guests go upstairs to a loft bar to drink some beer and listen to live music. It feels like a college party, only with better beer. 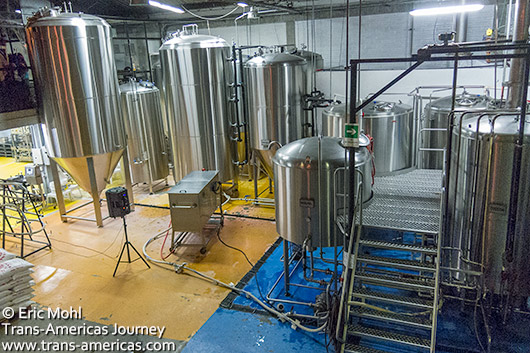 Part of the brewery at 3 Cordilleras in Medellin, Colombia.

Cervecería Libre itself makes and pours four beers including Libre IPA, Libre Passion (which is brewed with a passion fruit-like bomb of deliciousness called maracuya), a Stout, and a brown ale called Libre Avellana. The place attracts a young crowd with reasonable prices of 5,000 to 6,000 COP per beer (about US$2), late hours, and good music (Nirvana, Primus, etc.). 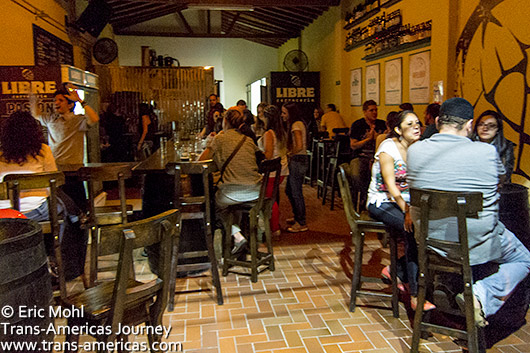 The Cerveceria Libre brew pub in Medellin has 12 taps and nearly 20 different Colombian microbrews for sale.

Do it: Basic brewery tours are available at Cerveceria Libre upon request. The Cervecería Libre beer bar is open Wednesday and Thursday from 5 pm to midnight, Friday from 5 pm to 2 am and Saturday from 6 pm to 2 am. Cash only.