Medellin is not a city known for gourmet cuisine. There are, however, plenty of traditional regional specialties to try when you travel to Medellin. Here’s what happened when we tried a beloved local dish called Bandeja Paisa for the first time…And it doesn’t stop there. The second largest city in Colombia is full of hole-in-the-wall or street corner eateries serving foods that are unique to the region. Medellin City Services offers a three hour food tour of Medellin that includes some of the best places to try chicharrón, cow intestines, blood sausage and more. It’s not a healthy tour, but it is a happy tour! 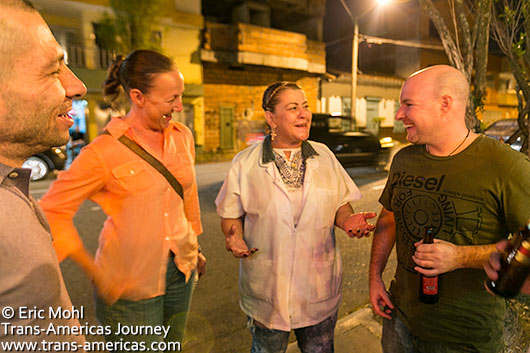 From left to right: Camillo (owner of Medellin City Services), Karen, Gloria (of chicharrón fame) and our friend Dave Lee.

Is this the best chicharrón in Medellin?

La Gloria de La Gloria in the Envigado area of Medellin, has been turning out some of the best chicharrón (fried pig skin with hunks of fat and meat attached) in the city for more than 30 years. The modest place is presided over by Gloria herself and she’s often got a bottle of aguardiente (local sugarcane and anise hooch) in her hands and she’s not afraid to share it.  When we introduced ourselves she took our hands and offered us a shot. 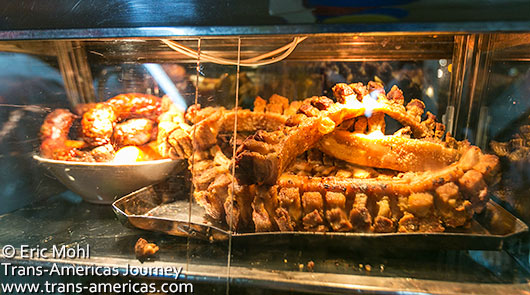 The display case at La Gloria de la Gloria and its succulent contents including the famous chicharrón front and center.

The place isn’t much to look at except for the glass display case which is full of gorgeous, succulent meat. The ribs are wonderfully tender and the chicharrón lives up to its fame: meaty, rich, and not overly salty.

Chunchurria is just a fancy word for cow intestines

Herman’s street cart is spotlessly clean and that’s important when you’re about to eat the small intestine of a cow, aka chunchurria (also called chunchullo). Taken from young bulls called novillos, the grilled small intestines, which are chopped, spiced, and griddle fried then served in a styrofoam cup, are about how you’d imagine: pungent and slightly rubbery.

Herman, left, runs the cleanest street stand in Medellin where he fries up cow intestines.

Not all blood sausages are created equal

Blood sausage, called morcilla, is a staple throughout Colombia but they vary greatly in quality. The worst morcilla is dry and squishy and overly gamey. The best examples are a rich mix of rice, blood, and seasoning inside a snappy casing. That’s the type served at El Hijo de Estela, a popular, casual, open-air restaurant in the foothills above Medellin. 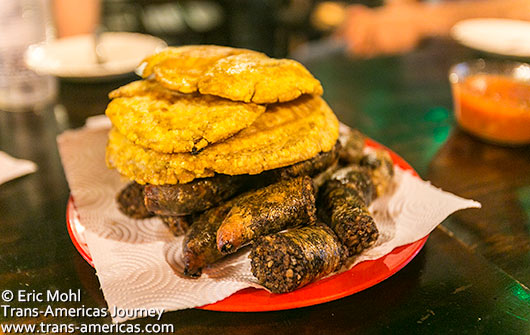 Even if you don’t think you’re going to like blood sausage this is the place to give it a whirl and they serve lots of other well-made, meat-centric dishes and delicious patacones (fried plantain rounds) too.

A buñuelo as big as your head

A buñuelo is a ball of dough and cheese that’s deep fried until it’s golden and crispy on the outside and pale and fluffy on the inside. It’s a ubiquitous snack in Colombia and best served fresh out of the fryer. They are always impossibly perfectly round and usually the size of a bloated golf ball. 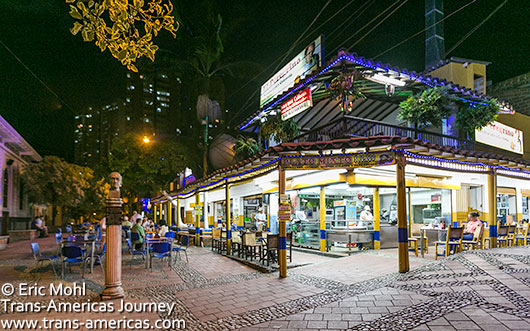 El Pergrino in the Sabaneta neighborhood of Medellin serves buñuelos that are nearly as big as softballs.

However, at El Pergrino in the Sabaneta area of the city they make ’em big. Really big. Like the size of a softball big. Perfect for sharing. 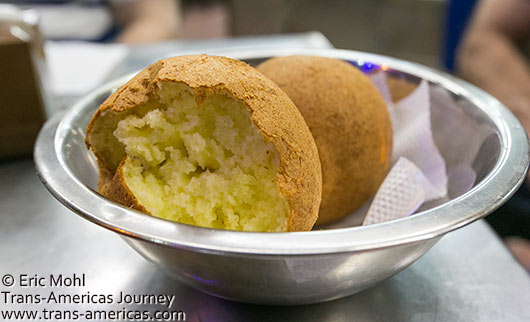 The softball-size buñuelos at El Pergrino in Medellin are perfect for sharing.

By the time we were done with our food tour we were all ready for a nap.