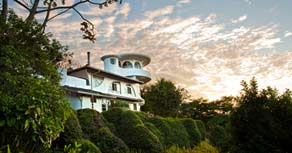 You won’t find many straight lines at Finca Rosa Blanca Coffee Plantation Resort. Perhaps inspired by the meandering vines that lace their way through the Costa Rican jungle and the gently curving rows of coffee plants that surround the inn, almost everything at this eco-pioneer of a hotel is rounded, soft, natural and brilliantly white-washed.

If Gaudi went to Greece and got inspired to create an art project called Alice in Jungleland you’d have something nearly as original and whimsical as Finca Rosa Blanca where doors and windows have rounded edges and walls undulate and wrap themselves around light-filled interior spaces. It’s organic, homey and chic all at the same time.

Finca Rosa Blanca is also supremely tranquil despite the fact that it’s less than 30 minutes from the country’s main airport outside the capital city of San Jose. 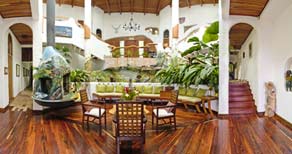 Designed by Francisco Rojas Chaves, who is adept at balancing eco and aesthetic concerns, the signature curved walls and window frames were achieved, in places, by using a special Styrofoam product that can be cut and melted into curved shapes, is surprisingly strong and provides great insulation. Roofing tiles are made by repurposing bags that were originally used to help grow bananas. 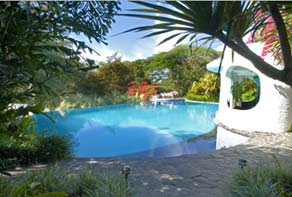 The pool and Jacuzzi are kept clean through ionization, not chlorine. A greenhouse (fertilized with compost from kitchen waste and leftovers from coffee processing at the neighboring plantation) supplies many ingredients to the on-site restaurant.  All of the inn’s employees live locally. The Inn is also solar powered and all laundry is air-dried to reduce energy consumption.

Though Finca Rosa Blanca features a lot of gorgeous wood work, even that’s sustainable. The rich, lustrous floors, for example, are made from gorgeous (and almost impossible to find) Ron Ron wood. Finca Rosa Blanca got their Ron Ron from trees that had been cut down during a highway construction project.

These green efforts, and more, have earned Finca Rosa Blanca Five Green Leaves (the highest level) from Costa Rica’s Certification of Sustainable Tourism  (CST) program. CST is no joke. All eco claims must be backed by extensive evidence, inspections are regular and each criterion is rated with a score with your lowest score serving as your final overall score. Glenn clearly treasures his Five Green Leaves distinction as much as his Andrew Harper and Johansen’s accolades.

Glenn’s green measures have also earned Finca Rosa Blanca a place within the Cayuga Collection  group—a small collection of hotels in Costa Rica and Nicaragua that are strictly eco. 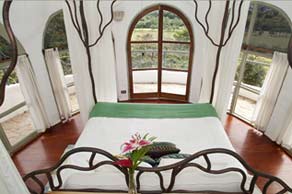 This does not mean that guests have to give up any pampering.  Though I counted six framed “eco messages” in my villa room (reuse towels and sheets, watch your water consumption, use the recycling bins, etc) I was also delighted to find a charming kitchenette with a built in coffee nook seating, tons of light thanks to a skylight over the entrance, my own personal Wi-Fi signal booster, a jetted tub, an addictive bed and great toiletries (I loved the rich, clove-scented body lotion). Even better? The dark chocolates brought at turn down are spiked with the finca’s own estate grown organic coffee and made locally.

Finca Rosa Blanca has five villa rooms, each with kitchenettes. Another eight rooms are located in the main house—one with a bed perched on top of a built-in boulder and another on the top level with a lofty, crows’ nest feel. 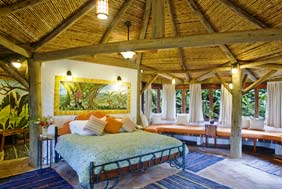 All accommodations have private balconies with views across deep green fields of coffee down to the capital of San Jose in the valley below. Every guest room is decorated with playful pieces of art from Glenn’s personal collection including some of his own creations (in addition to being a ground breaking innkeeper, Glenn is also an accomplished artist).

Favorite pieces from my villa room included a life size carved wooden monkey perched on top of my closet and a charming petite line drawing done by Glenn years ago.

As you stroll the lush grounds, full of birds and butterflies, it’s hard to believe that this same spot was a denuded, dusty wasteland that had been used as a motocross course until Glenn’s wife Terry re-planted and landscaped the grounds with indigenous plants, flowers and trees that have thrived in the years since.

Glenn and Terry also operate a 42 acre certified organic coffee plantation right next to the inn. However, that wasn’t part of their original plan. About a decade ago Glenn saw an ad for a coffee finca for sale in the region. On a lark, he called and discovered it was a small farm that literally abutted their existing property. They fell in love with the run-down coffee plantation and the price was right so they pounced.

It took them seven years to plant shade trees, re-plant coffee plants following the curves of the land and get rid of all traces of previously-used chemicals in order to achieve organic certification from the Rainforest Alliance (which actually allows some use of chemicals) and the much-more-strict German agency BCS Oko-Garantie.

Now all of the 8,000 to 10,000 pounds of coffee the plantation produce each year is chemical-free. It’s all dried in the sun (not in a wood-burning dryer). They’ve reduced water usage during the processing of coffee beans from 300 gallons per process to 40 gallons. Everything is composted. 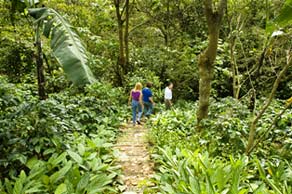 Eighty percent of the coffee they produce is used at the hotel, sold to guests or shipped to the inn’s sister property, Arenas del Mar. They only roast a week’s worth of coffee at a time but if they don’t have the bag you want they’ll custom roast it for you and have it ready before you check out. It does not get any fresher than this.

To really get into Finca Rosa Blanca’s coffee culture book a two and a half hour plantation tour with bilingual guide Leo Vernari. Leo’s spent more than 25 years in the coffee business and is an acclaimed barista. He’s also a heck of a lot of fun and really brings the joys and challenges of growing organic coffee to life. Cap off the tour with complimentary coffee and freshly baked cookies and muffins served every day from 2-3.

Come back down to earth with a treatment in the inn’s light and airy spa. The two enormous treatment rooms also have a private shower and jetted tub to enjoy post-pampering.

Oh, and about those namesake white roses? You won’t find any at Finca Rosa Blanca. The inn got its name not from the flower, but from a poem by Jose Marti called “I Have a White Rose to Tend” which is about planting a white rose for friends and foes alike.