The Patagonia region of Chile is a daisy chain of glaciers and fjords created over millions of years. In Puerto Natales, we parked our truck for an adventure on board a ship traveling through parts of the Southern Patagonian Ice Field to see some of the largest non-polar glaciers in the world on the 4-day/3-night Kewasker Route trip with Cruceros Skorpios. 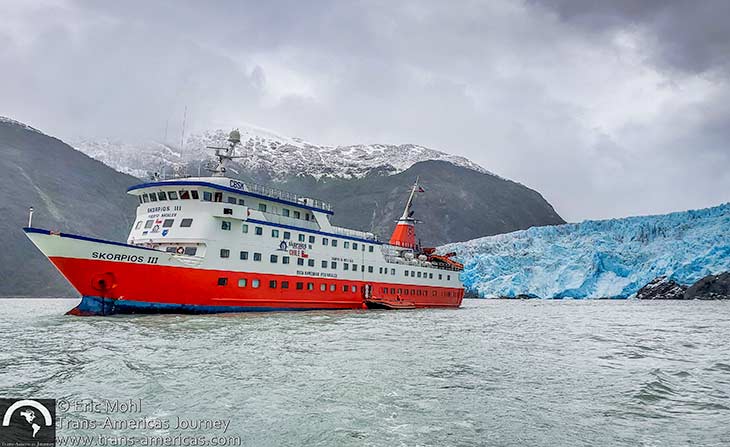 The Skorpios III at the Amalia Glacier near the start of our trip through part of the Southern Patagonian Ice Field.

Greek immigrant Constantino Kochifas Cárcamo arrived in Chile and worked as a fisherman. His job took him through the fjords and past the glaciers in the south of the country and he thought other people would also like to see the natural wonders of the Southern Patagonian Ice Field which is the second-largest non-polar ice field in the world covering 4,773 square miles (12,363 square km) including dozens of glaciers. 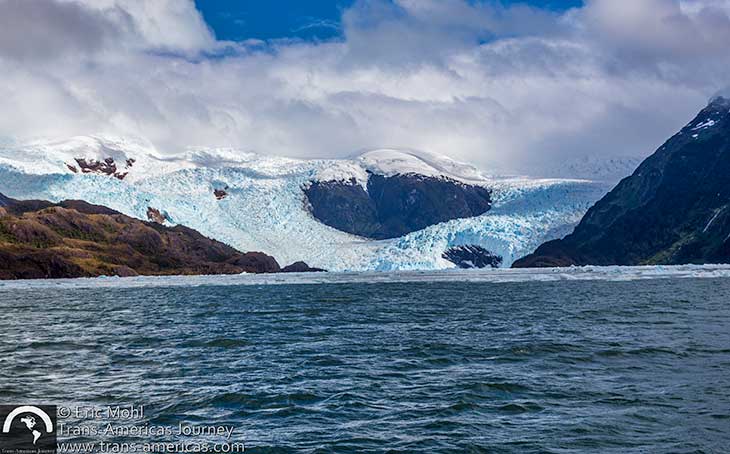 One of the glaciers in the Calvo Fjord.

Constantino worked hard bringing people through the fjords on a simple fishing boat and managed to save enough to build his first ship, the Skorpios I, which launched in 1978. The Skorpios fleet now includes dozens of cargo vessels and three Skorpios tourist boats with private cabins, bars, dining rooms, and smaller expedition boats for short tours from the ship. 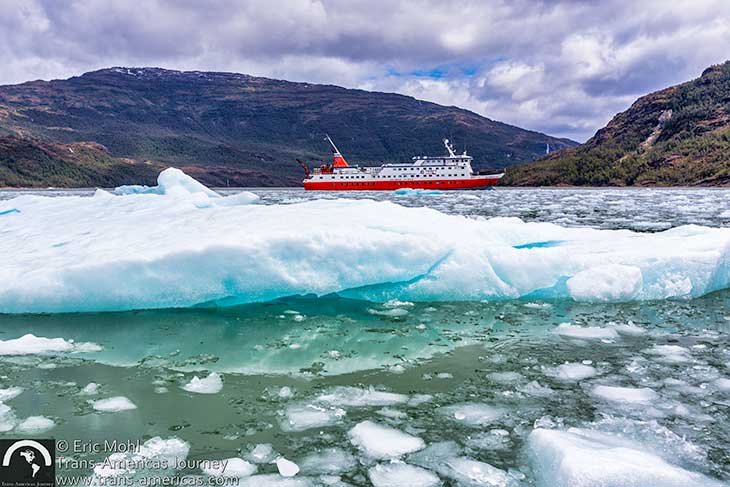 The Skorpios III navigating through ice.

Given Constantino’s Greek ancestry, the names on board should be no surprise. Decks on the Skorpios III, for example, are called Parthenon, Acropolis, Atenas, and Olimpio. There’s even a Zeus bar. 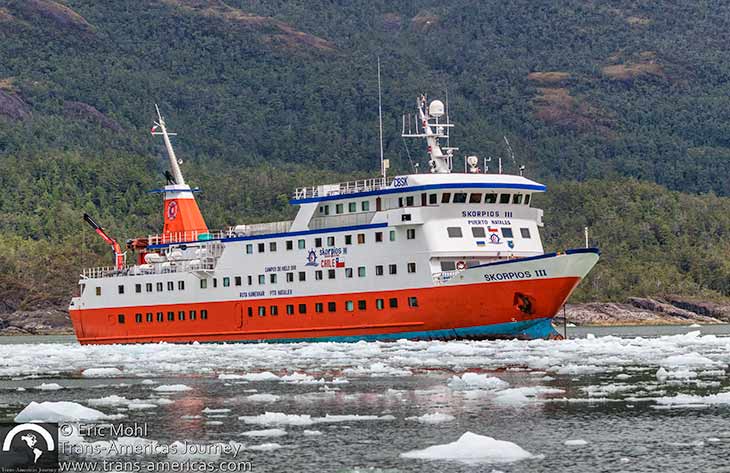 The Skorpios III navigating through ice.

Though Constantino died (onboard one of his ships), the company he created is still family-owned. It’s currently run by the founder’s six sons, one of whom is a captain. He was on vacation when we sailed, so our man at the helm was the precise and polished Captain Marcelo. Many of the crew members have been with the company for decades which creates an easy familiarity among onboard.

Day 1: Into the fjords

One of the narrow passages the Skorpios III had to navigate through to reach the glaciers.

After departing around 6 pm, the crew of the Skorpios III navigated through Morla, Vicuña, Unión, Collingwood, and Sarmiento channels and through a dramatically narrow passage called Angostura Kirke. The mountain peaks, which appeared and disappeared as clouds rose and descended, had a fresh dusting of snow and condors flew overhead. By 9 pm, we’d passed the last boat we’d see for days and gathered for dinner in the dining room complete with white table cloths and Chilean wine. 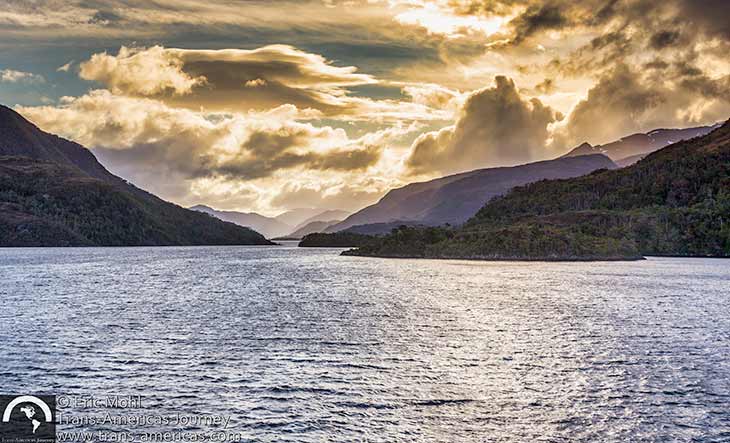 Our first sunset on the Skorpios III.

When we woke up, we were near the Amalia Glacier. This is a tidewater glacier that surrounds the still-active 3,300 foot (1,000 meter) Reclus Volcano inside Bernardo O’Higgins National Park which is the largest protected area in Chile covering 8,712,691 acres (3,525,901 hectares). There are no roads to or through this park which is only accessible by boat or helicopter. 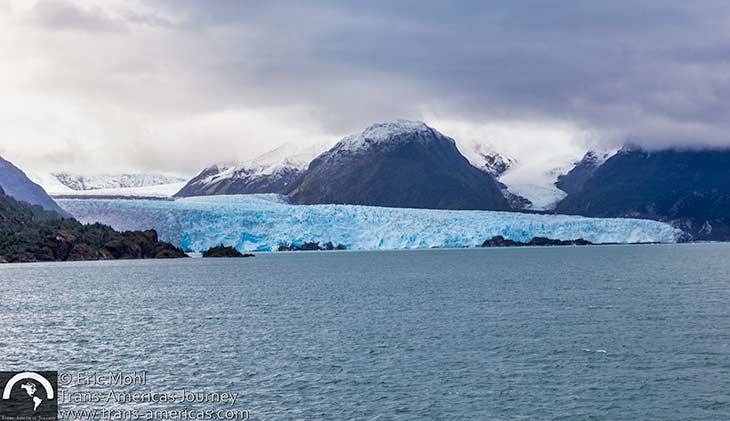 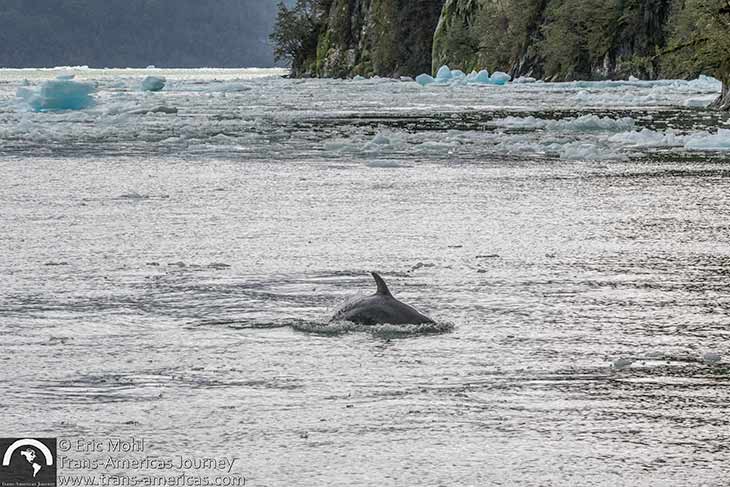 One of the many dolphins we saw during the trip.

Austral dolphins played in the wake of the bow as the Skorpios III moved slowly through the water, which was a milky blue color because of sediment and minerals in the meltwater coming off the glacier. The Skorpios III got very close to the glacier, but we were going even closer. 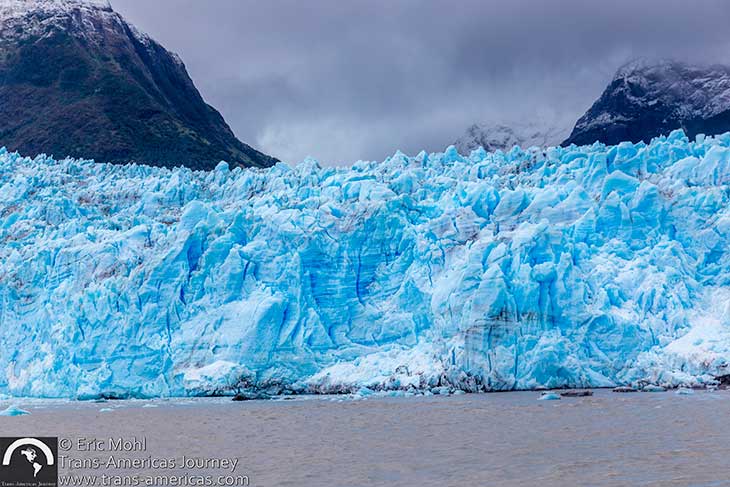 The many shades of blue in the Amalia Glacier.

After putting on life jackets, we got into hard molded plastic tenders that are used for excursions. Unlike inflatable dinghies, these open-air tenders are tough enough to push through ice bobbing in water and able to make rocky shore landings. The tenders carried us to a large granite slab that has been polished smooth by the retreating glacier. In the past 16 years, the Amalia Glacier has receded 1.25 miles (2 km). 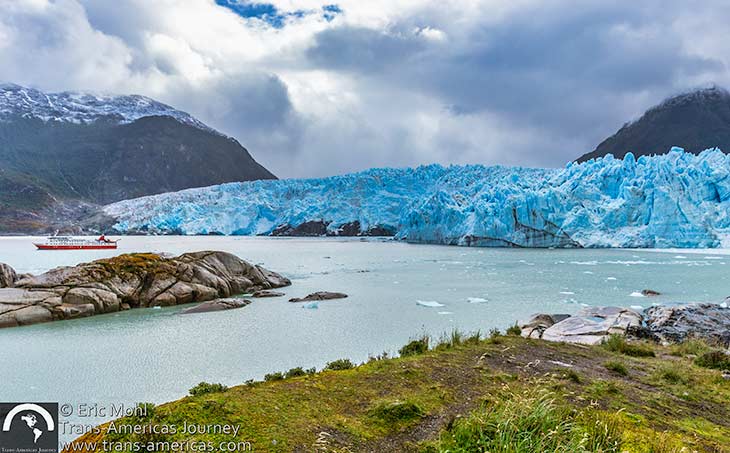 The Skorpios III dwarfed by the size of the Amalia Glacier.

This gif shows the glacier calving.

As we stood on the granite just a few hundred yards from the face of the Amalia Glacier, we could hear the ice cracking and creaking and popping ominously. Then the glacier calved (check out our gif above), shedding a large chunk of ice which created a low wave that seemed to come toward us in slow-motion. Watching the glacier calve was an awesome display of power and nature, but it was also a sobering reminder of how fast we’re losing them. 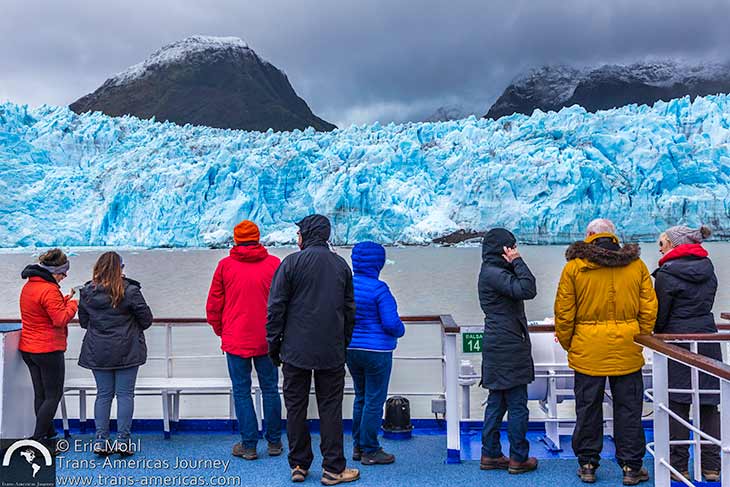 Glacier watching onboard the Skorpios III.

The sun broke through the clouds as the tenders took us back to the Skorpios III. Once back on board, the captain maneuvered the ship closer to the wall of ice so that we could appreciate its size and its many shades of blue. 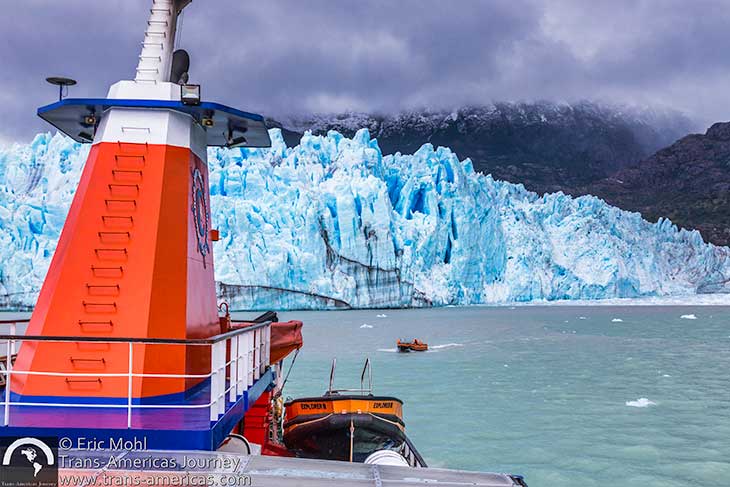 A tender passes the Amalia Glacier to return to the mother ship.

The crew of the Skorpios III continued navigating and, after lunch, we got back into the lifevests and back into the tenders to motor through the Asia Fjord to visit the Brujo Glacier and its 1.25 mile (2 km) long face. 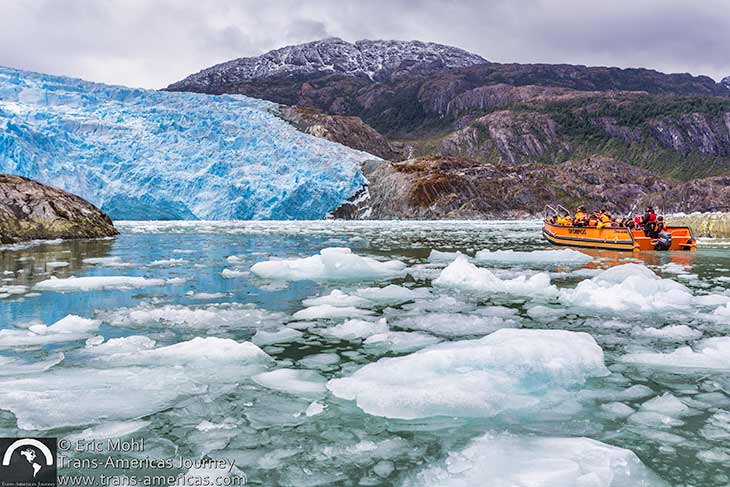 Lots of floating ice in front of the Brujo Glacier prevented the tenders from landing, but we got a good look at the glacier’s long face from the water.

There were so many big chunks of ice in the water below this massive glacier that we couldn’t land the tenders, so each driver navigated around the glacier to admire the ice, look for nesting cormorants, and nose into a tight gorge to so a partially hidden waterfall. All the while, the glacier made cracking noises that seemed to threaten a big show of calving that never came.

Left to right: Imperial Cormorants, Magellanic Cormorants (aka Rock Shag), and a Skua. 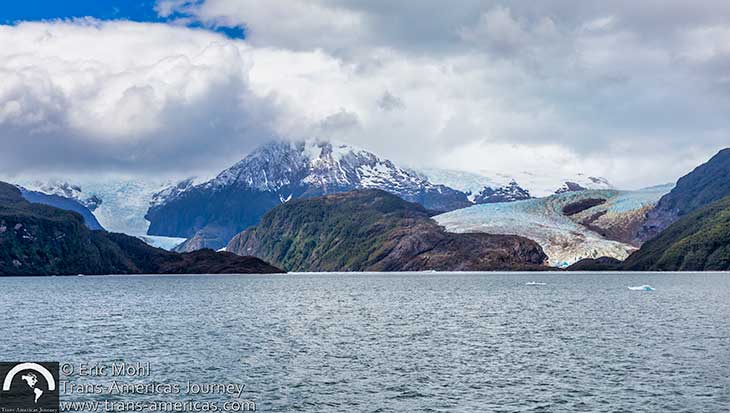 One of the many glaciers in Calvo Fjord. 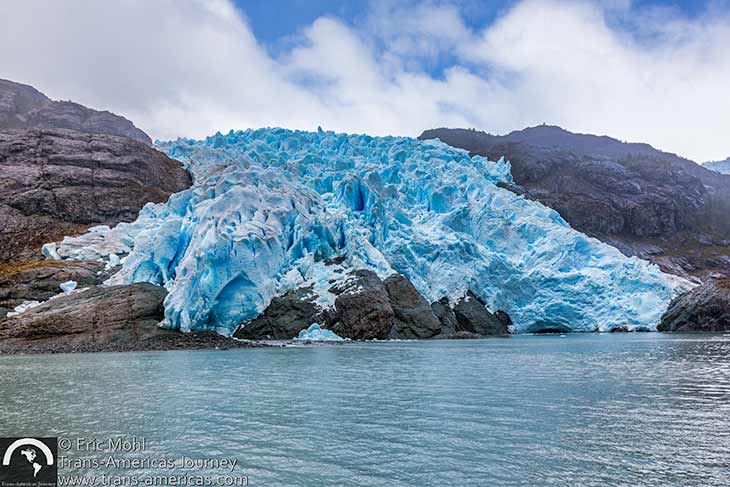 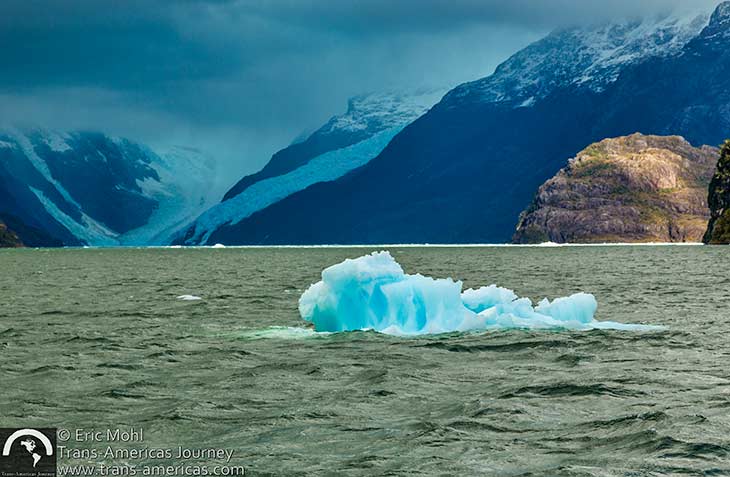 An icerburg in Calvo Fjord.

Along the way, we saw more dolphins, more nesting cormorants, some condor nests, and young condors getting flying lessons. We also navigated past chunks of ice the size of our truck and many perfectly-clear chunks that looked like abstract art thanks to the sculpting effects of the wind. 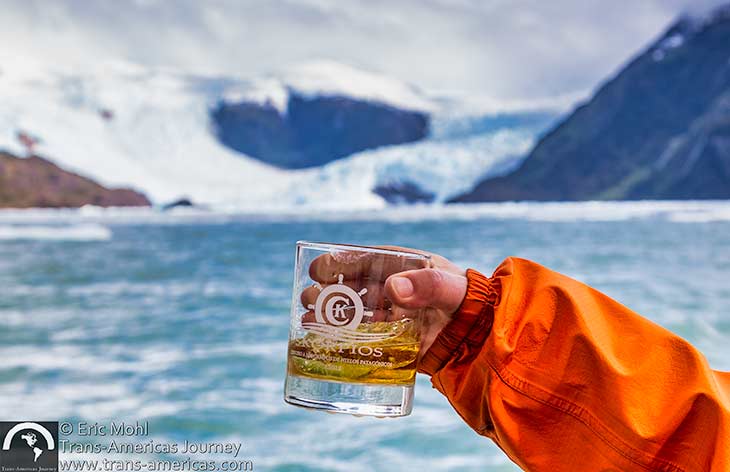 A few of those super-clear pieces were hauled on board and put into coolers. Mid-tour, we enjoyed a 12-yer-old whisky served over 30 million-year-old glacial ice. 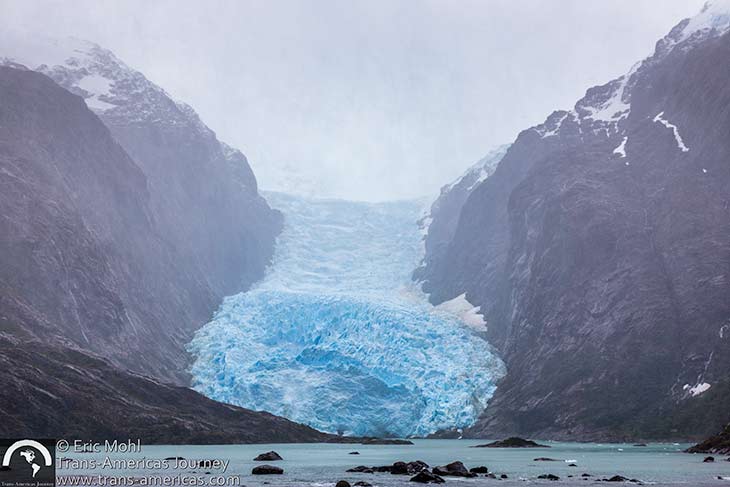 The next morning sustained 45-knot winds caused the cancellation of our first excursion. However, Captain Marcelo navigated around Montañas Fjord so that we could at least see some of the fjord’s most impressive glaciers from the safety of the Skorpios III. Rain, low clouds, grey conditions, and that big wind gave us a taste of Patagonian weather, which made us think about the native people who lived in these harsh conditions for tens of thousands of years before they were wiped out by disease and missionaries and murder after Europeans came to this region. 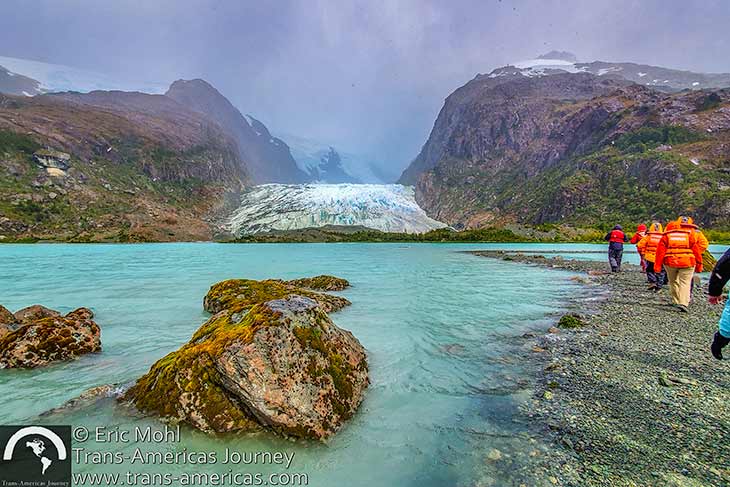 Walking on the rocky, wet trail to Bernal Glacier.

By late morning weather conditions had calmed down and we were able to get into the tenders for the short ride to a trail leading to the Bernal Glacier. The Skorpios company got permission from CONAF (the government agency that administers Chile’s national parks) to move the rocky moraine around this glacier to create a 1,000 foot (300 meter) raised rock trail from the landing point to the foot of the glacier where we could see internal waterfalls and tunnels through the ice and even touch the glacier. 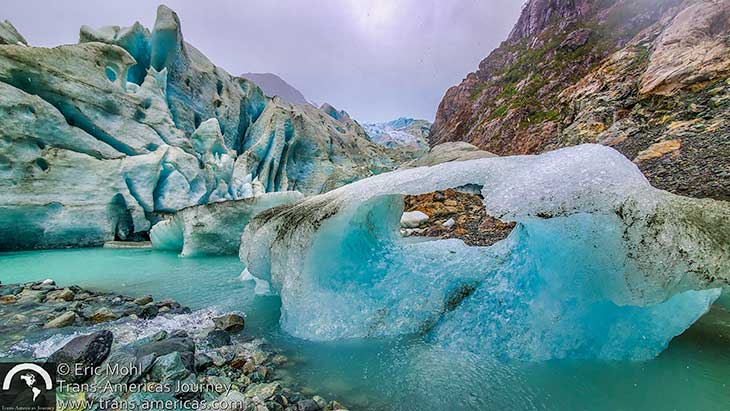 Artistic ice formations on and around the Bernal Glacier. 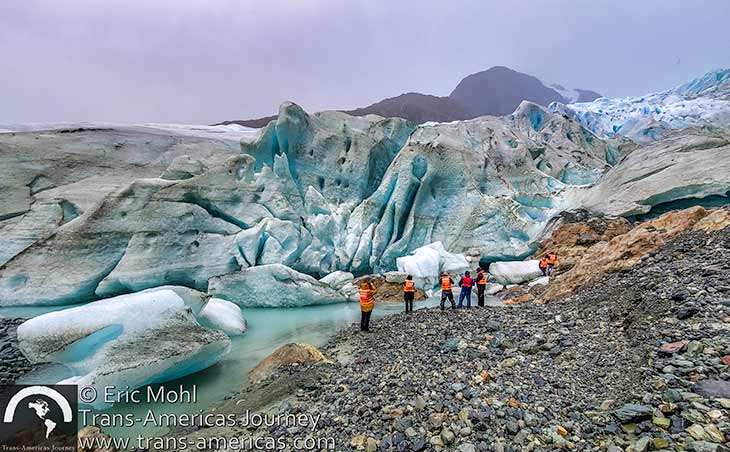 In the evening, on the way back to Puerto Natales, we got back into the tenders for a one hour ride through the Angostura Blanca where we saw nesting rock cormorants, a condor, and a few Chilean dolphins. Then it was back on board the Skorpios III in time to get ready for the farewell dinner and party.

On the itinerary, this dinner is listed as “formal” and a few of the passengers showed up in black tie. Others didn’t dress up at all, so you can define “formal” any way you want. Unlike other dinners onboard, the farewell dinner is a massive buffet. There were pounds of king crab, abalone, mussels, rice, salads, multiple desserts and much more. 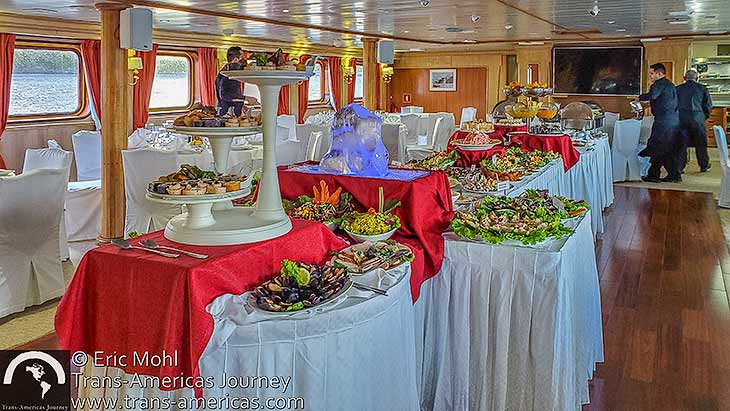 The over-the-top buffet on the final night of the trip. And, yes, there was an ice sculpture.

After a champagne toast, the buffet was open for business. After dinner, Luis, who is the clowning “Julie Mccoy” of the crew, pulled out all the stops. He’s from Santiago, speaks perfect English (he was an English teacher), and has the right sense of humor and even temperament for this role as, essentially, the cruise director. On this final night, he was also the DJ, channeling all of his inner musical theater lover to spin tunes (from classics like “Only You” to disco to funk to Latin favorites) and lead sing-alongs and dance parties. Luis’ enthusiasm was contagious and the night was fun in a cheesy cruise kind of way.

After breakfast, passengers disembarked back in Puerto Natales. 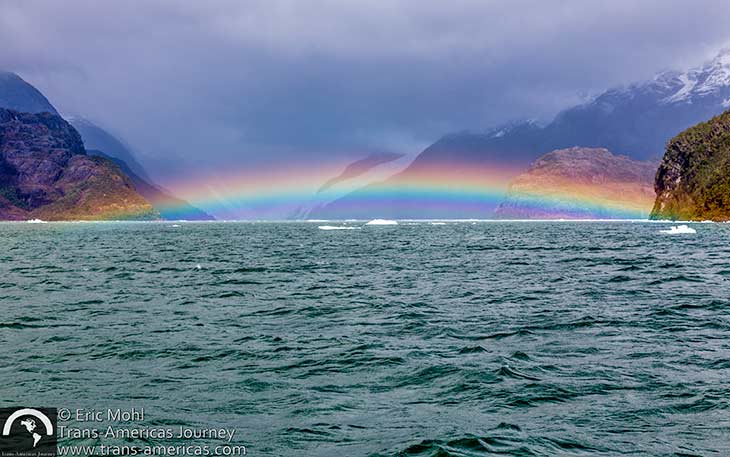 Check out some glacial highlights from the Southern Patagonian Ice Field in our video, below. 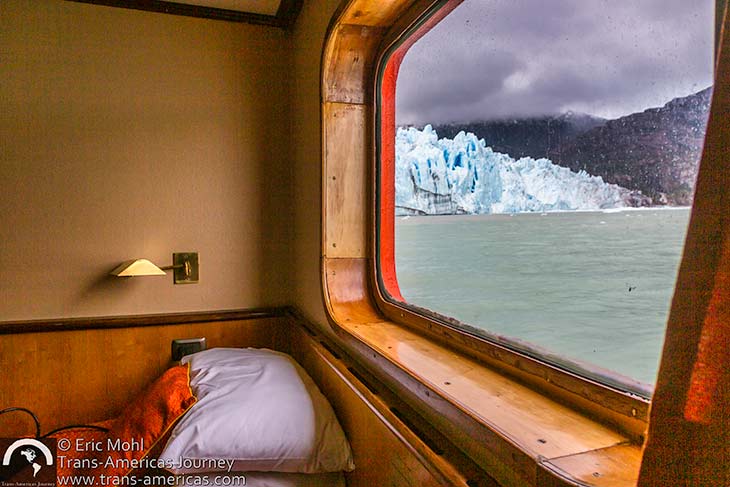 The view from our cabin on the Skorpios III. 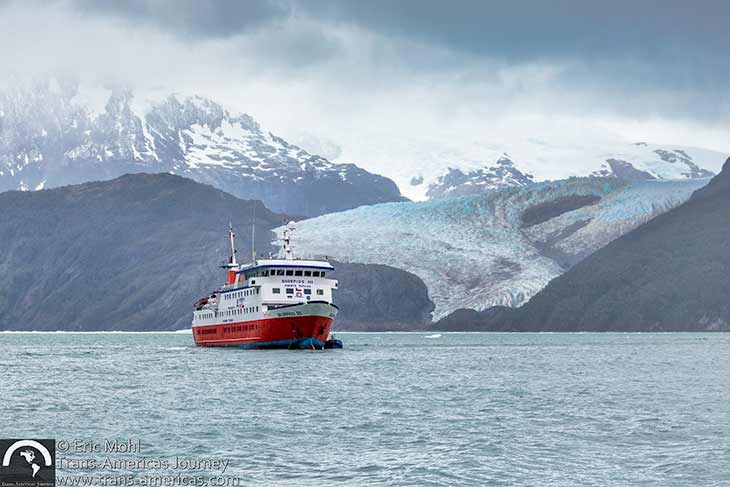 The Skorpios III in Calvo Fjord.

Check out the view from the bridge of the Skorpios III in our time-lapse video, below, which was shot with our Brinno camera.