Los Nevados National Park in central Colombia is a dangerous beauty, full of high altitude landscapes carved by glaciers and volcanoes, including the Ruiz Volcano which has proven deadly in the past and is currently making its mighty presence felt again. 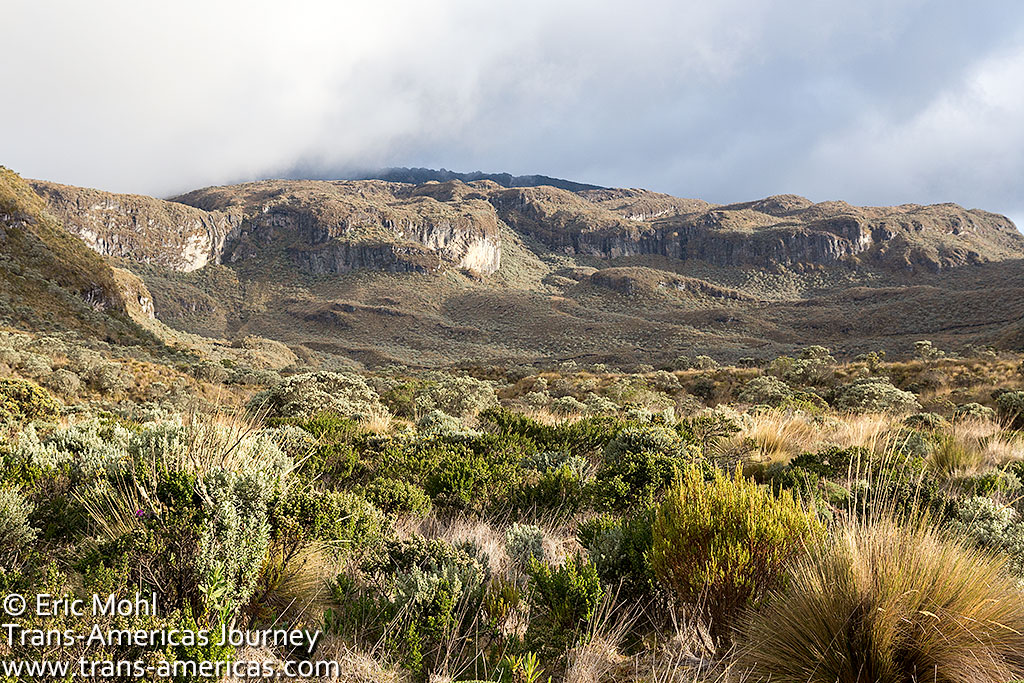 The dangerous beauty of Los Nevados National Park in Colombia

Los Nevados National Park (Parque Nacional Natural Los Nevados in Spanish) was created in 1974. The park gets its name from a Spanish word commonly used for snowcapped mountains or volcanoes (nevado means snowcapped). There are a number of volcanoes within the 144,000 acre (58,300 hectare) park, but the Nevado del Ruiz (Ruiz Volcano) is the biggest and baddest of them all.

In 1985 the 17,547 foot (5,389 meter) volcano erupted in the night and the glaciers and snowcap on its peak melted with devastating results. More than 25,000 people, mostly in the town of Armero, were killed as a river of mud and debris flowed down from the flanks of the Ruiz Volcano. It was the second deadliest volcanic eruption in history. 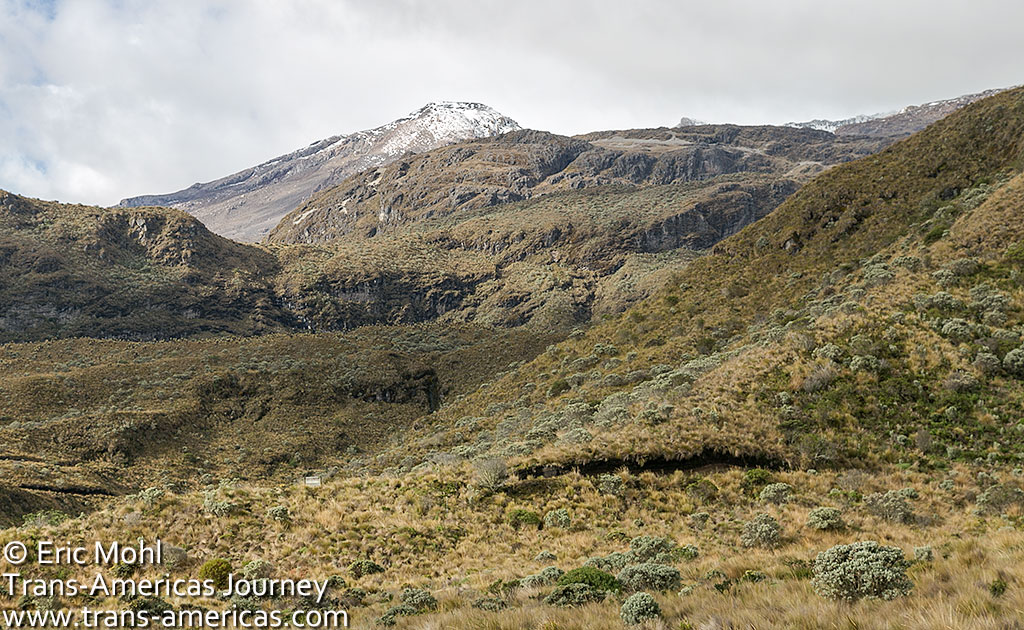 One of three vents on the Ruiz volcano shows off a dusting of snow in Los Nevados National Park.

The beauty of the park comes from those same volcanoes whose peaks we want to glimpse and whose glaciers and eruptions have created the landscape within the park. In 2009 Los Nevados National Park was the third most visited park in Colombia with more than 50,000 visitors (COP 57,000 or about US$18 entry fee including a mandatory guide) coming to see all that beauty. However, the park opens at the whim of its namesake volcanoes. If they are too active then the park is deemed too dangerous to visit and access can be restricted or stopped altogether. 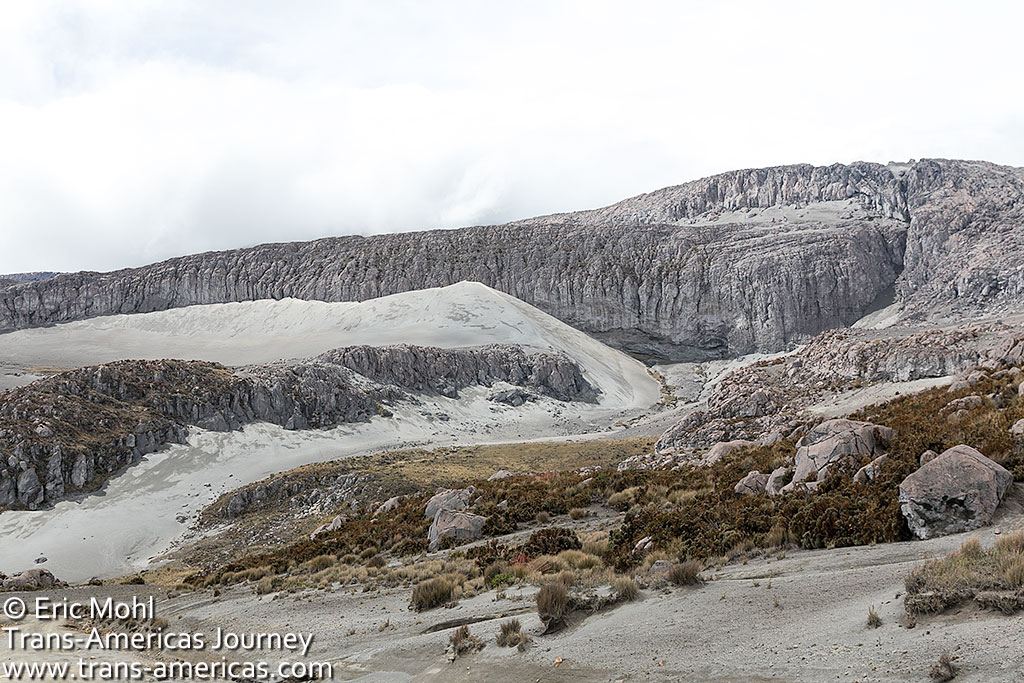 The park was in restricted access mode when we were there and the higher elevations, roads, lakes, trails and the El Cisne Refugio were all closed to visitors because of activity within the Ruiz Volcano. But that did not stop us.

Colombian national park officials kindly assigned us a park employee who took us on an overnight trip through the park, but first we had to deliver some condor food. Instead of taking the usual route into the park’s main Las Brisas entrance near the town of Las Esperanza, we drove in from Villa Maria along a rough back road carrying a dead calf in a bucket. 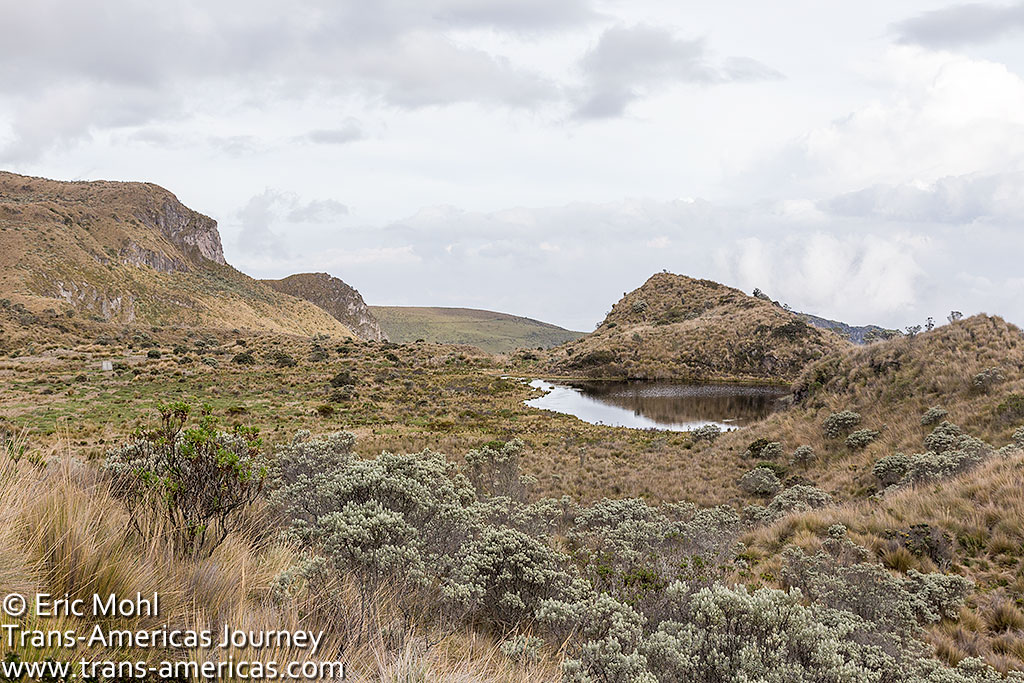 The high altitude páramo landscape in the park acts like a sponge and forms many small ponds and lakes.

Los Nevados park is home to a dozen or so Andean condors which were bred at the San Diego Zoo. The species is considered threatened as populations decrease and while park officials say the Los Nevados condors are thriving, they still support the community with food drops like the dead calf. 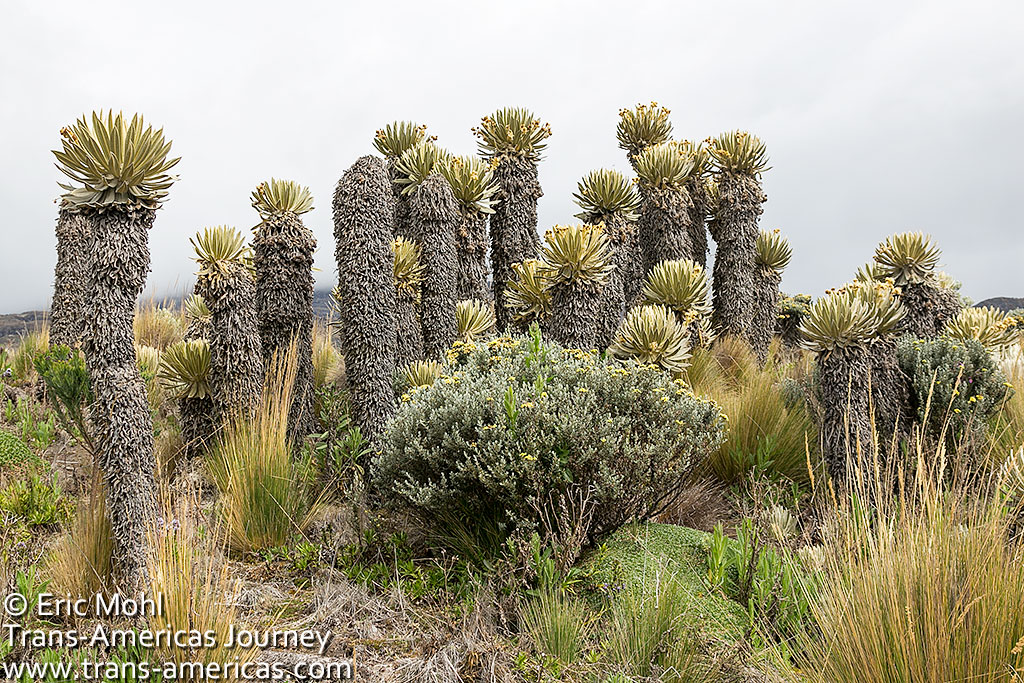 Frailejon, which reminded us of Joshua trees, are a mainstay of the páramo landscape in the park.

About five hours later we finally entered the park. Los Nevados is a high altitude park and a kind of alpine tundra called páramo, which only exists in the northern Andes of South America, thrives here. The ground is covered with rugged tufts of grass, Joshua tree-like flowering frailejón plants and a weird low-growing, dark green dome cushion plants which, upon closer inspection, is made up of thousands of tiny plants. We also saw hundreds of rabbits but, sadly, not the puma or the tigrillo that also live here. 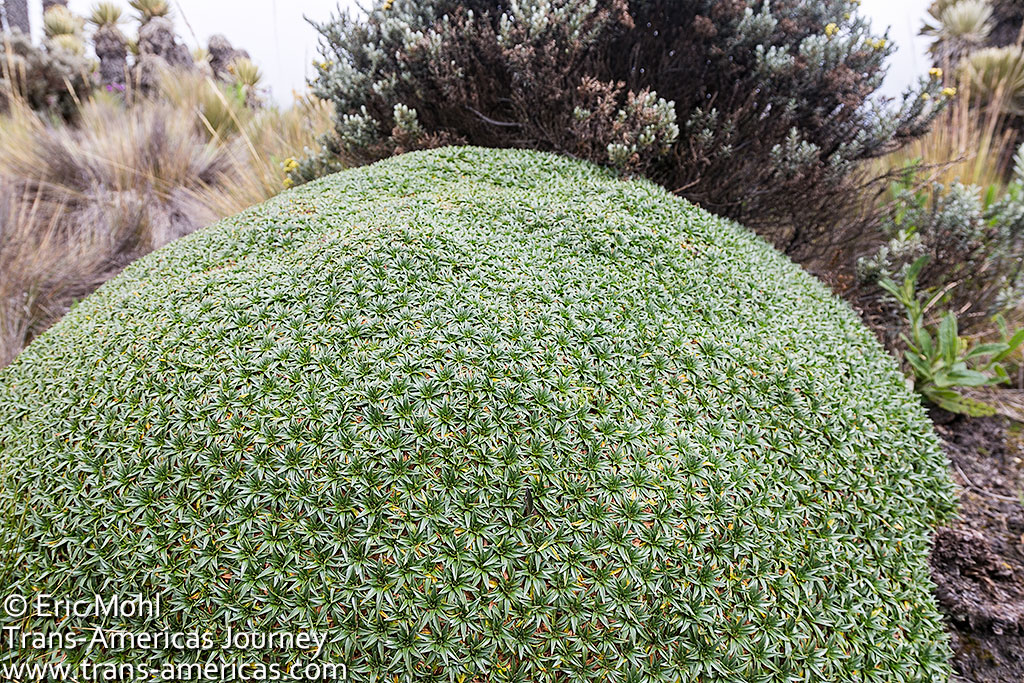 Though it is called a cushion plant, this massive green dome is solid as a rock and made up of thousands of tiny, prickly star-shaped plants.

It was getting late so we headed straight for the El Cisne Refugio (named for one of the other volcanoes in the park) which is a huge building capable of housing up to 70 people. When the park is fully open there’s a restaurant as well. Because the park wasn’t officially open the normal dorm building was locked up tight. So we settled into a much smaller and more rustic building behind the larger structure. This is where park rangers and employees stay and it was our home for the night. There was a kitchen, a cold water bathroom, and bunk beds plus electricity and, weirdly, a TV but no method of heating. 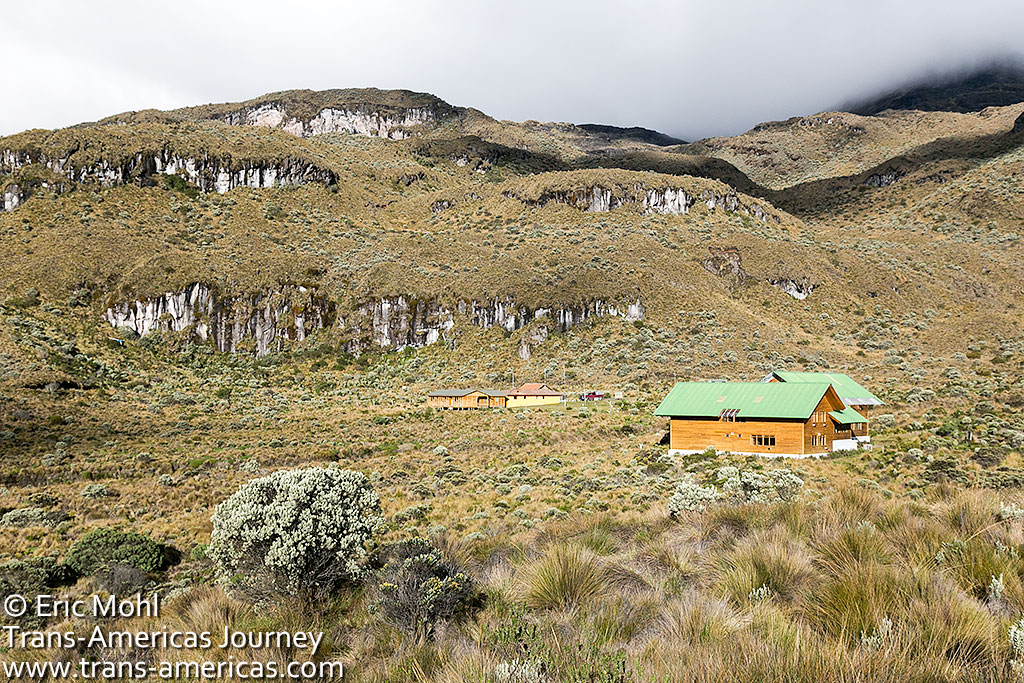 The El Cisne Refugio offers rooms and a restaurant.

Our park escort Hector explained that Los Nevados offers more than just views. There are hiking trails in the park as well including a three hour round trip hike to a glacial lake called Lake Otún at 12,800 feet (3,900 meters). The lake is full of trout and is a breeding ground for many types of ducks. There’s a cabin on the lakeshore as well and camping opportunities. 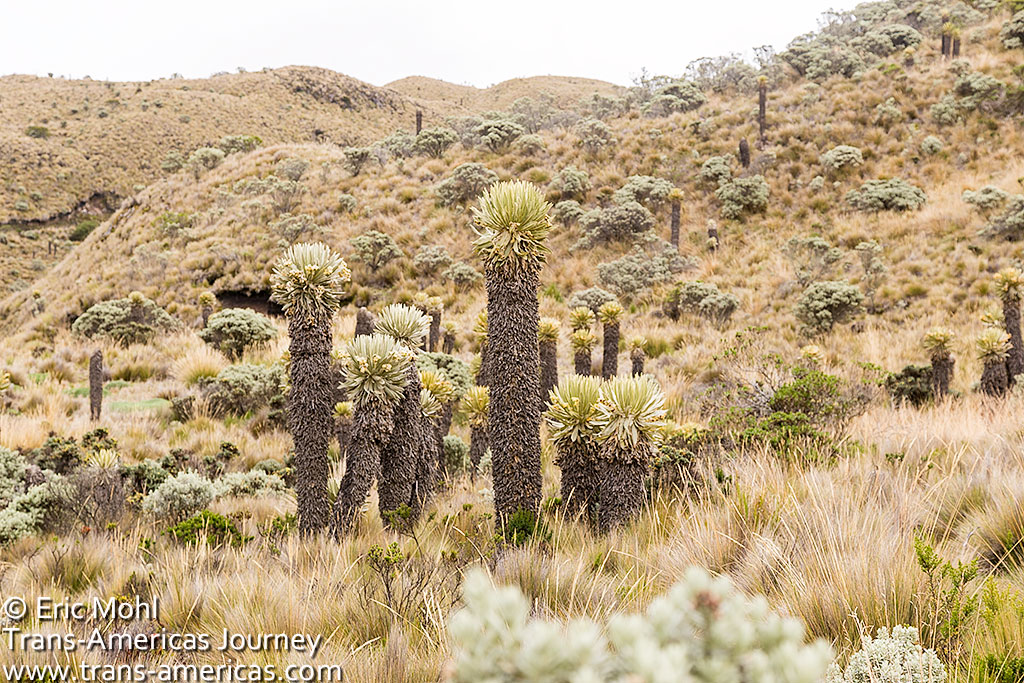 More páramo in the park.

The El Cisne Refugio is located at more than 13,000 feet (4,000 meters) and at this altitude it gets very cold the moment the sun goes down. As evening came we stayed outside as long as we could to watch the light change on the páramo and the hills that surround the small bowl where the buildings are located. Soon we retreated back inside where we bundled up in layers of wool and climbed into our sleeping bags for the night. 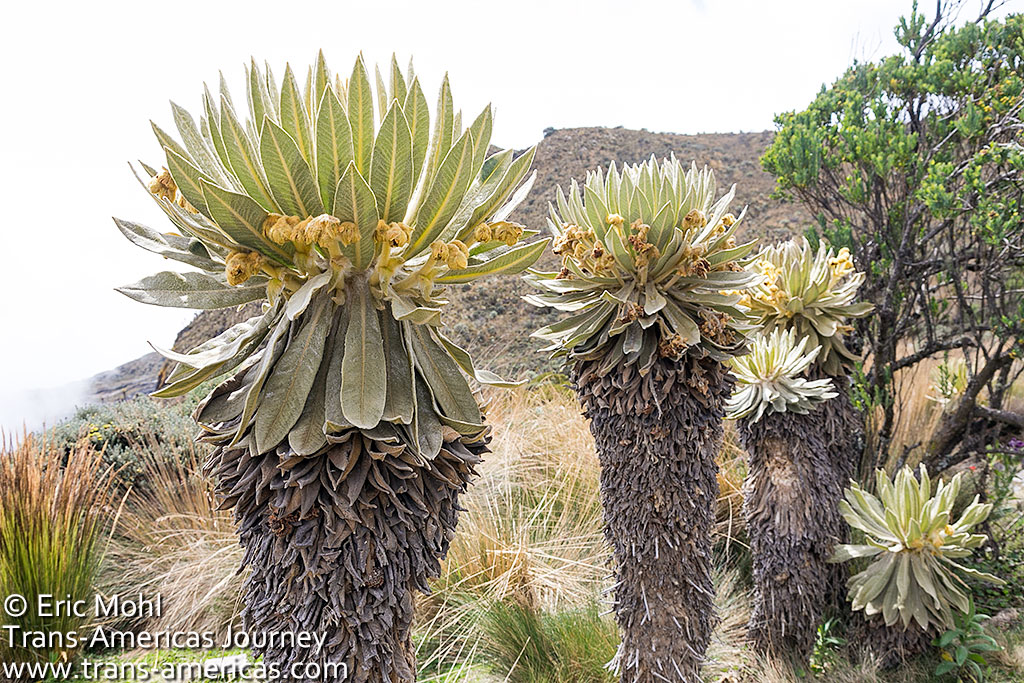 By 7 am the next morning we were back on the road, headed to a point from which we hoped to catch a clear view of the top of the Ruiz Volcano before clouds descended. We only got brief teases of the top as the clouds came and went, carried by strong winds. We’re told that July and August are the clearest months in the park, but even then cloud-free views of the high peaks are not guaranteed.

When was the last time you drove to 15,512 feet? Here’s our truck at that altitude on the flanks of the Ruiz Volcano in Los Nevados National Park. Click here to see a larger version of his panoramic shot. 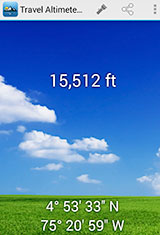 What we did get was a milestone on our little road trip. As the surprisingly good dirt road through the park climbed and climbed we reached 15,512 feet (4,728 meters) on a cinder covered pass just below Ruiz Volcano–the highest elevation we’d driven to on the journey at that point. We also saw one of those San Diego condors and a páramo eagle soaring above us. Hector told us that the condors sometimes swoop down the snowy hillsides and brush their chests against the snow to clean their feathers. 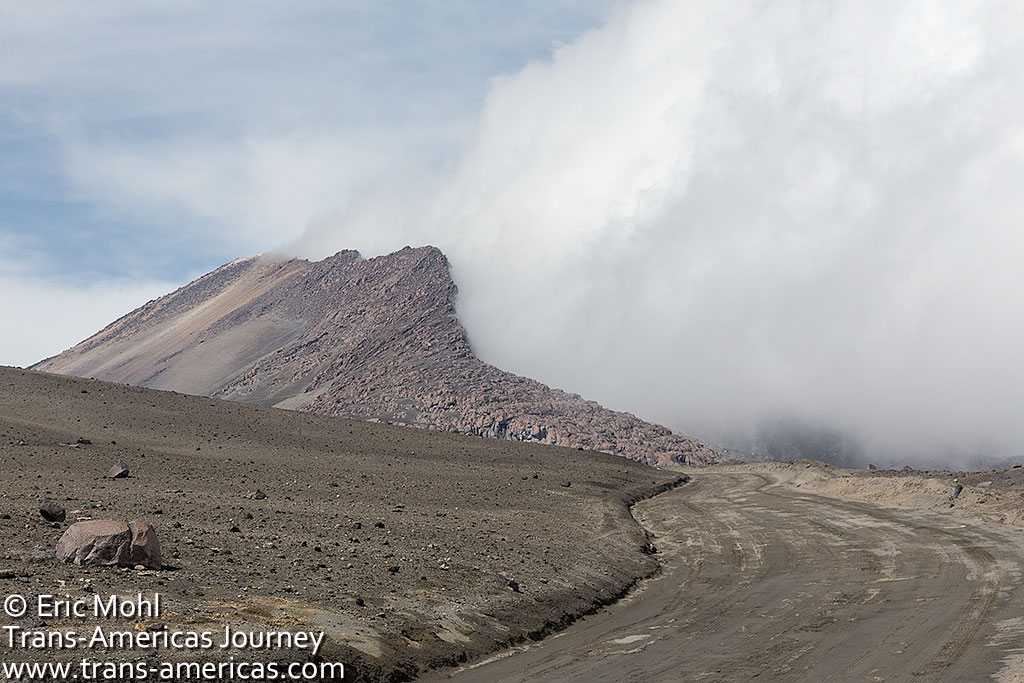 Clouds descend over a craggy mountainside cut by glaciers and shaped by volcanic eruptions in Los Nevados National Park in Colombia.

The terrain in Los Nevados is constantly shifting due to wind, weather and seismic activity. When we were there a section of road was only marginally passable. The area had recently been crudely cleared so small park vehicles could get through, but there was no guarantee that our monster truck would be able to pass. We decided to take our chances and push forward through the park toward the main Las Brisas entrance anyway rather than backtrack over the terrible dirt road we’d taken into the park the previous day. 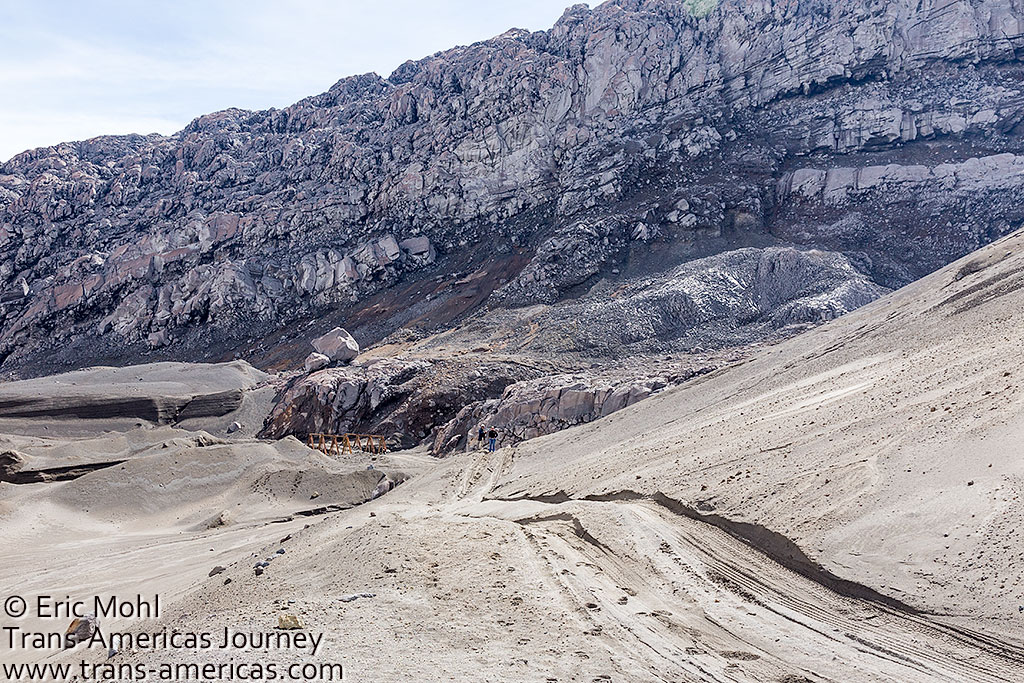 There used to be a road in there somewhere…

This meant driving along a notorious stretch of road called “The Ss” because you have to navigate 17 switchback turns, some of them very, very tight for our long-wheel-base truck.Then we reached the semi-rebuilt wash-out area and managed to power through narrow spaces and deep ash to get through. This is the sort of stuff that Eric finds adventurous and Karen finds arduous. 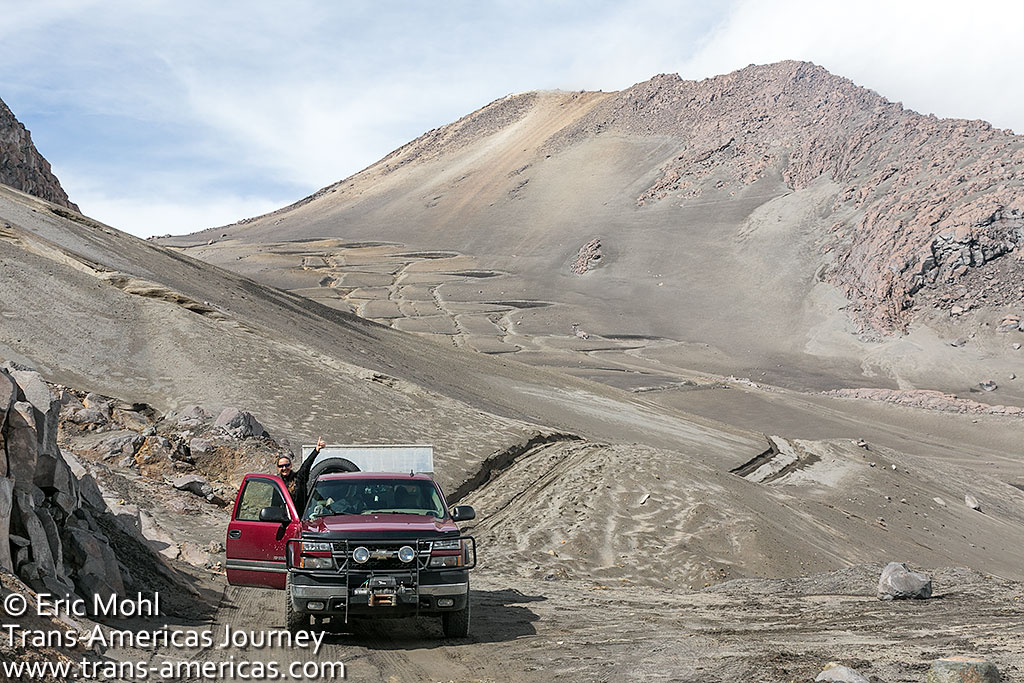 Our truck after Eric successfully negotiated his way through a sketchy roadless section. You can see the 17 switchbacks of “The Ss” in the background.

Just short of the main Las Brisas entrance we stopped at Chalet Arenales. The original structure burned down in 2010 and a new building (which is not in the chalet style) opened in 2014. It’s surprisingly modern and offers a warm interior, free hot coffee, and large windows which give great views onto the moonlike landscape of the park. 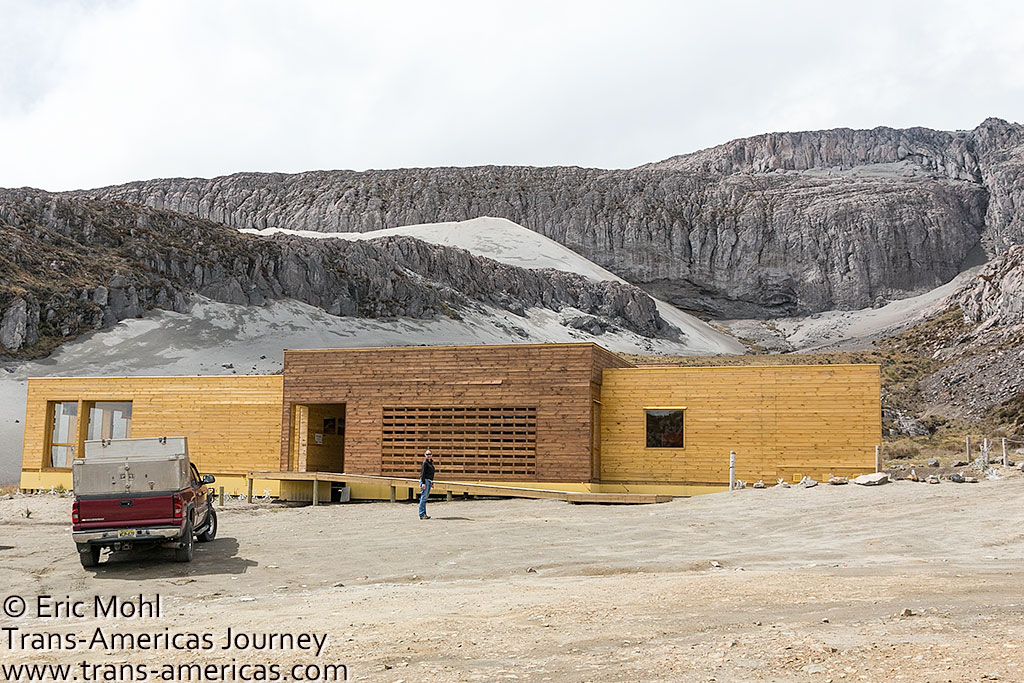 Many people only travel as far as the new chalet when they visit Los Nevados but we’re grateful to Colombian national park officials for finding a way for us to visit more of the heart of the park even during a time of restricted access. The unique páramo, extreme landscapes, rare wildlife, and fleeting glimpses of the Ruiz Volcano made Los Nevados one of our favorite national parks on the journey so far. 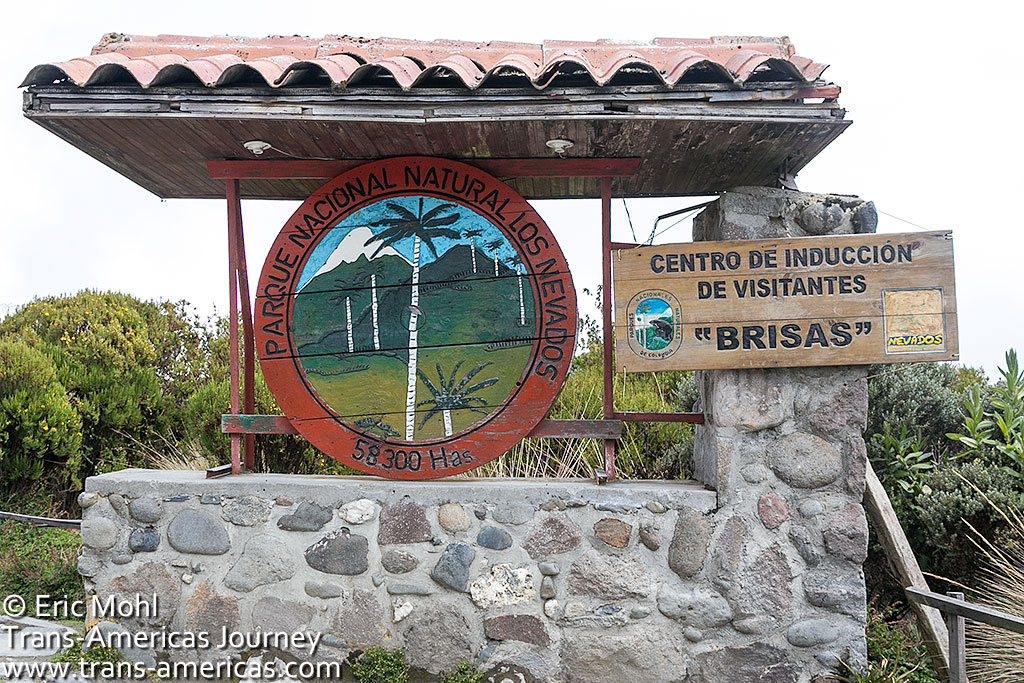 This entrance to Los Nevados National Park can be closed whenever seismic activity within the park is deemed too high. Check the status before planning your visit.

And speaking of the Ruiz Volcano, it’s still very, very active. Most recently, Ruiz erupted again this month. No deaths have been reported so far, but the airport in nearby Manizales was closed. Check park status before planning a visit to Los Nevados.

Smart visitors to Los Nevados National Park combine it with a warm and relaxing visit to one of the many hot springs in the area where you can soak in water that’s naturally heated by the area’s volcanoes. These places range from basic pools to full service hotels. We soaked our bones at Termales El Otoño which has three big, clean pools surrounded by a large hotel with standard rooms and traditionally painted stand-alone cottages.
Book Now 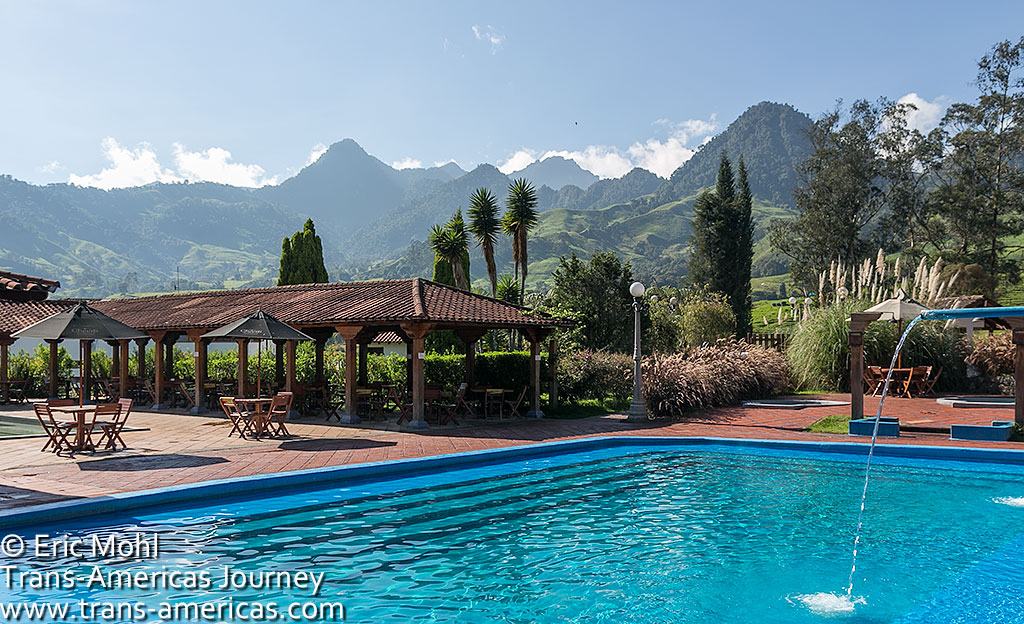 One of the soaking pools at Termales El Otoño.