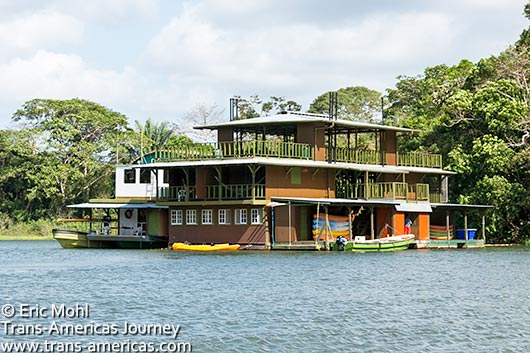 Jungle Land Panama, the only houseboat hotel in Panama. Check in and sleep on the Panama Canal.

Jungle Land Panama is Panama’s only houseboat hotel. On top of that, it’s located in a secluded section of Lake Gatún which forms a crucial part of the Panama Canal. Jungle Land Panama is the creation of Captain Carl, an expat from the US who has connected two houseboats, crafted a handful of simple but comfortable rooms and leads boat and kayak tours on the lake. 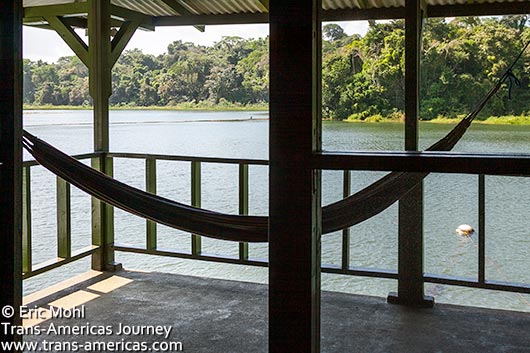 Comfortable, clean rooms aboard the Jungle Land Panama houseboat hotel were designed for relaxation and a pretty much unobstructed feeling of being right in the jungle. 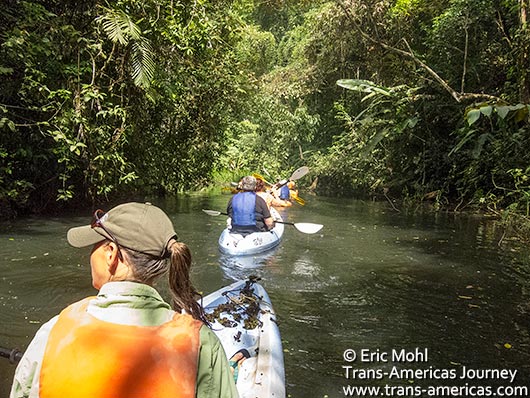 Many excursions from Jungle Land Panama houseboat hotel take guests on adventures around the waterways of Lake Gatún and the Panama Canal.

While staying at Jungle Land Panama you can go fishing, look for monkeys and caiman, or just relax in the hammocks or on the two astro-turfed “lawns”. The food is terrific and Carl’s stories are entertaining, but the best part is sleeping in a totally wild and peaceful arm of the lake just a short distance from the world’s busiest shipping channel. 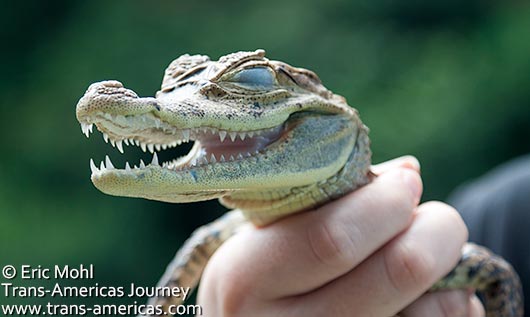 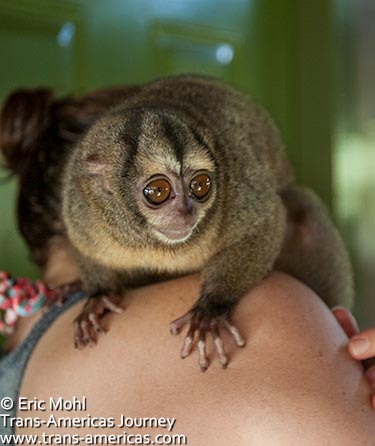 A rescued Panamanian night monkey lives on the Jungle Land Panama houseboat hotel and sometimes agrees to interact with guests. 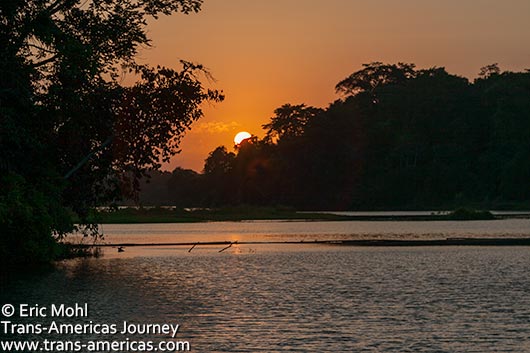 Sunset over the jungle seen from the Jungle Land Panama houseboat hotel. It’s hard to believe the world’s busiest shipping channel is just a stone’s throw away. 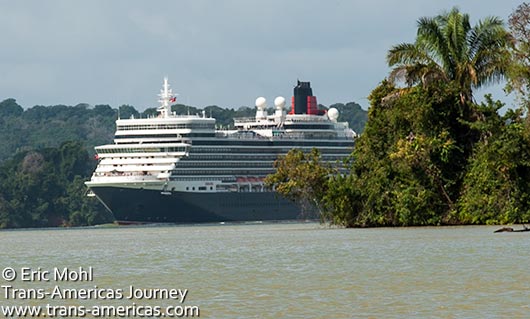 During one excursion from the Jungle Land Panama houseboat hotel we nearly bumped into the MS Queen Elizabeth as she made her way through the Panama Canal.

From radar tower to hotel on the Panama Canal

In 1965 the US Air Force built a radar tower on the banks of the Panama Canal and by 1969 is was being used by the Federal Aviation Administration to control air traffic in the area and by the Panama Canal Commission as a communications tower.

In September of 1988, the radar tower became Site One in the Caribbean Basin Radar Network which was used by the US government to monitor, spot, and deter planes suspected of carrying drugs north from South America. 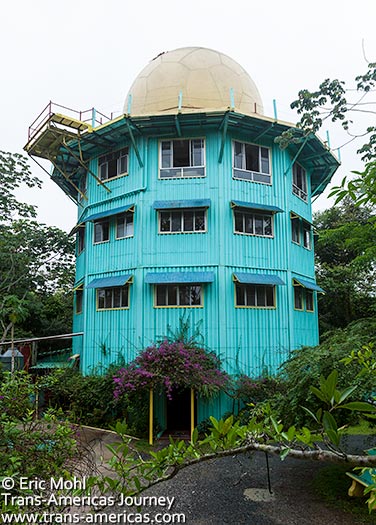 The Canopy Tower Hotel, on the banks of the Panama Canal, is shaped that way because it used to be a US military radar tower.

Located within the Soberanía National Park, in which more than 500 species of birds have been identified, Canopy Tower soon became a magnet for bird watchers, including some famous ones like Oprah Winfrey, eager to explore the surrounding rainforest and spot wildlife from their own rooms which are at treetop level. 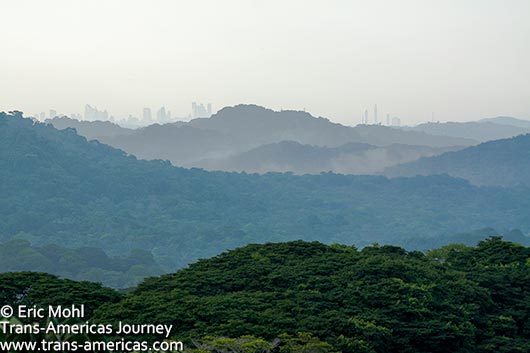 Rainforest, the Panama Canal, and the skyline of Panama City as seen from the roof deck of the Canopy Tower Hotel.

The roof deck of Canopy Tower is at treetop level, perfect for bird watching.

We spent a lot of time gawking at toucans, tanagers, and tityras as well as small groups of mantled howler monkeys, Geoffroy’s tamarins, sloths, and a bunch of stuff we’re not smart enough to identify from the window-filled public spaces, rooftop deck (from which you can also see the nearby Panama Canal), and even from the huge window in the shower in our room. 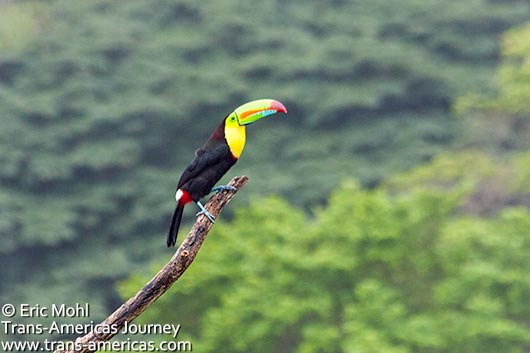 One of many toucans we saw right from the Canopy Tower Hotel on the banks of the Panama Canal. 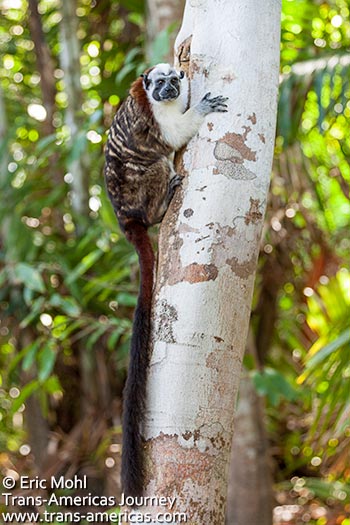 A Geoffroy’s tamarin seen from the Canopy Tower Hotel.

And don’t worry. You won’t be roughing it in barracks with a bunch of drill sergeants. Rooms are clean, simple, and comfortable with fans and good screens to keep critters out. Electric towel heaters and clothes drying areas help keep the jungle damp at bay. 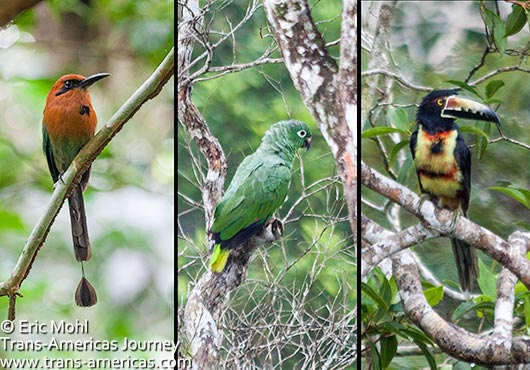 More than 500 species of birds have been documented in the rainforest around the Canopy Tower Hotel including (left to right) mot mots, parrots, and aracaris.

There’s an earplug dispenser because the all-metal structure can creak and groan but we never heard anything. You’re more likely to hear frogs and owls in the night. 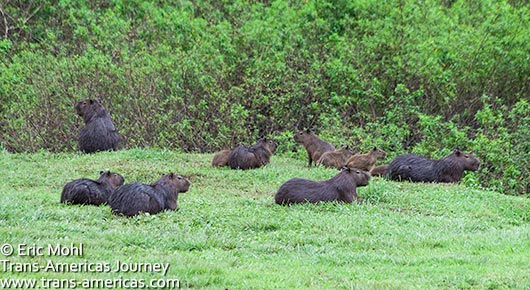 A small herd of capybaras, the largest rodent in the world, seen during a wildlife walk around the Canopy Tower Hotel.

The food is plentiful and terrific and meals often include local seasonal specialties like palm nuts. The guides are knowledgeable, patient, and enthusiastic and the trips, including hiking along the wildlife filled (but not very ecologically named) Pipeline Road and night drives, are fulfilling. 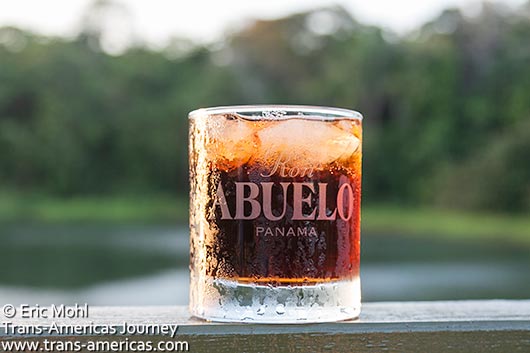 Enjoying a Panamanian rum cocktail on the Panama Canal.