We just spent two days at Cotton Tree Lodge in southern Belize near Punta Gorda. While at Cotton Tree Lodge we met two funny, smart, and interesting couples from Alaska which is one of our favorite places on the planet. One of them, Rick, looked a bit familiar to us but we didn’t think too much about it. 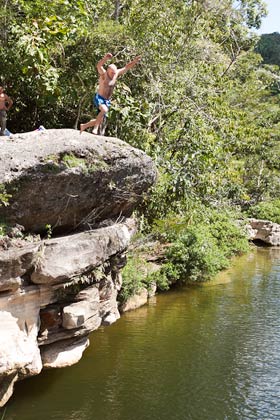 Rick, our long-lost Alaskan good samaritan, taking a 20 foot jump into the pools of the Rio Blanco National Park in Belize wearing significantly less clothing than when we first met him in Alaska.

Rick mentioned that he and his wife have a cabin near Cantwell, Alaska. We mentioned that in September of 2006 we got a flat tire on a @TAB teardrop camper we were pulling while driving along the old dirt Denali Highway between Paxson and Cantwell where we discovered that the tire iron supplied with the camper did not fit the lug nuts on the wheels.  We were, we said, rescued by a good Alaskan samaritan who drove by and then went back to his cabin to get the right tire iron for us.

That’s when all the lightbulbs went on. Rick was that good samaritan from more than four years ago who helped us out on a deserted back road in Alaska.

This is a true story which proves that the world is as big or as small as you need it to be.