We’re still using (and loving) previous top travel gear from previous years like KINeSYS sunscreen, Chaco flip flops, our Seagate external hard drives, and our Rare Parts tie rods. Now it’s time to present our top travel gear of the year 2014 including a taxi app we love (and it’s not Uber), a genius (and cheap) way to keep mosquito coils from breaking, a laptop surprise for Karen, two retro gadgets that will keep you warm at night, Eric’s new favorite (small) camera, prescription sunglasses that look badass not bifocal, the perfect smartphone for travelers, and more. All road tested. All road approved.

Here’s what earned the right to be called…

There are many times during our Trans-Americas Journey when we need to take high quality photos but it’s just not safe or cool to carry around Eric’s big, flashy Canon SLR camera and lenses. In 2010 Eric added a Canon Powershot S95, about the size of a pack of cards, to his arsenal and it quickly became his go-to camera in dodgy cities, when it was important to take pictures discretely and when he just didn’t want to haul around his heavy camera bag full of tricks. In 2014, after four years of pretty extreme use, the S95 no longer focused properly when it was zoomed in so Eric started researching all of the high quality compact cameras that were high quality, but not quite SLR replacements. The problem is that most of them aren’t exactly pocket-sized or affordable or high quality enough, so his search lead him straight back to Canon. He now uses a Canon Powershot S120 (below) which is the updated version of the S95. Like its predecessor, it can shoot fully manual and RAW images and has a sharp and fast lens covering a solid zoom range. It’s also very ruggedly built but still lightweight and truly pocket-sized all for under $400. Eric loves the new touch screen on the S120 and the camera’s ability to change focus while shooting video.

When the “check engine” light on the dashboard suddenly goes on it’s impossible to know what the problem might be and whether it’s minor or urgent without taking your vehicle into the dealer and paying the mechanics to read the engine error code which set off the “check engine” light in the first place. That’s usually not an option when you’re driving through countries where dealerships are few and far between. Plus, who wants to pay a mechanic when you can check engine error codes yourself. Yep.  OBD  or “on-board diagnostics” is a standardized port that every vehicle has. The trick is reading it. We’ve had an OBD reader with us since Day 1 of our Trans-Americas Journey and in 2014 we upgraded to an OBDLink MX, which has enhanced information for GM and Ford models (the LX model covers all other makes). It not only reads our Silverado’s diagnostic codes but turns our Nexus 5 smartphone into the ultimate performance monitoring tool, providing all sorts of information about our truck like instant mpg, torque, mass air flow and dozens of other things we don’t really understand. And, yes, it will read that engine error code and tell you what the problem is so you know if you need to “check engine” immediately or not.

We are fans of Dell computers not only because their high-quality products are usually substantially less expensive than an equivalent Mac product but also because of their international warranty service that has allowed us to have computers fixed right in our hotel rooms by authorized Dell technicians in Mexico and Nicaragua. In 2014 Eric got an updated version of his 17 inch Inspiron and Karen changed from the heavy ruggedized Dells she’s had in the past to a Dell XPS 12 2-in-1 Ultrabook (below). It weighs just over 3 pounds (1.3 kilos) and is a drop smaller than the 13 inch MacBook Air. It’s got a sleek aluminum and carbon fiber shell and the 12.5 inch high-definition touch screen is stellar, the 256 GB flash hard drive is fast and reliable and with eight GB of memory Karen’s computer no longer crawls along when asked to do more than two things at once. It also has a flip screen that allows the laptop to be used like a tablet, that’s where the “2-in-1” comes in. The XPS 12 specs are nearly identical to the MacBook Air except that the Dell has a much better screen and can be used as a tablet. Most crucially, Apple’s “global” warranty (its version of what Dell has offered for years) still has many gaping geographical wastelands where the warranty does not cover you — ie, many of the places you want to go. Also, Apple’s global coverage is only available for two years and Dell’s is available for up to four years. 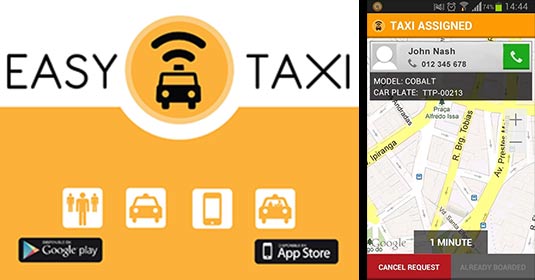 In many parts of the world, including many Latin American cities, hailing a taxi on the street is not recommended since taxi crimes (usually involving being driving around town to ATMs against your will until you bank account is empty) can happen. Therefore, it’s a good idea to call for a taxi because then there is a record of the name of the driver who was sent to pick you up. However, this requires a phone, an often lengthy wait on hold and the ability to understand the mumbling dispatcher who finally picks up the line. Easy Taxi, a free app for iOS or Android, solves all of those problems. You request a ride using the app which transmits your exact location. A drivers near your location claims the job and usually arrives at your location within minutes. You are sent the driver’s name, plate number, phone number and a photo so you have multiple ways of verifying that the person in the taxi is, indeed, your driver. You can also track the driver’s journey to you via a map on the app which is updated in real time. It’s wonderfully simple and safe and, unlike some other taxi apps, you pay the driver directly so there are no additional fees. Like most taxi apps, Easy Taxi only works in select cities primarily in South America, Mexico, the Middle East and Asia. 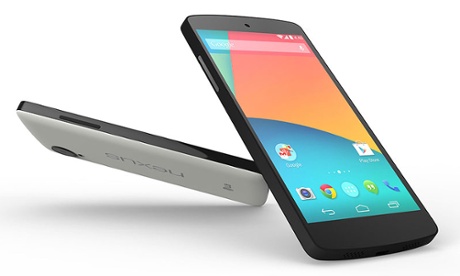 The Nexus 5 by Google is the perfect smartphone for travelers. Every Nexus is unlocked so you can travel anywhere in the world with it and have a local telephone just by dropping a local SIM chip in. Plus, the Nexus is a fraction of the price (US$349 with 16GB of storage) of similar high-end phones from Samsung, LG, Motorola and Apple whose smartphones cost well more than US$600 for an unlocked, contract-free model. Our Nexus also has a large, bright display screen and one of the best processors around so nothing slows it down. Not to mention we’re fans of Android over iOS as an operating system and the new Android upgrade, 5.0 (Lollipop) has some fantastic new features. Our only complaint is the less than stellar battery life of our Nexus 5 (a complaint many users have). Sadly, the new Nexus 6 costs a more typical US$649. However, frugal travelers like us can still find a more moderately priced new Nexus 5 on Amazon and eBay. 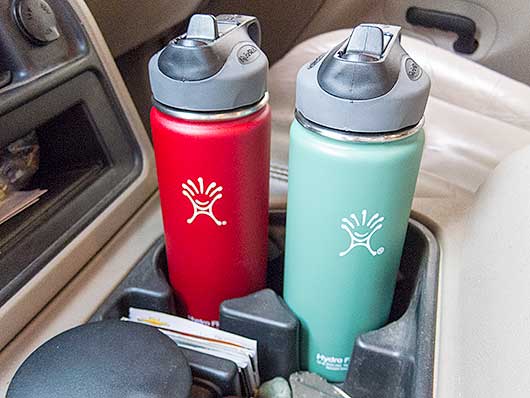 The straw tops on these Hydro Flask bottles make them easy to drink from even when we’re driving. 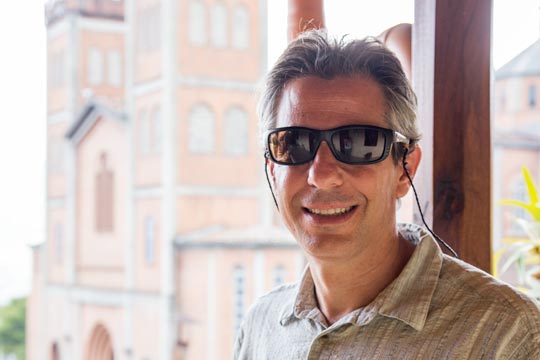 Prescription sunglasses. Shudder. But it was no longer possible for Eric to deny that he needed prescription lenses in all of his glasses, not just his reading glasses. Luckily, he didn’t have to ditch the Costa del Mar sunglasses that we’ve worn and loved since the very beginning of our Trans-Americas Journey because a wide range of Costa frame styles are available with prescription lenses. Now Eric can see what’s out there while still looking like a badass, not a grandpa in bifocals (he wears Zane frames, by the way). 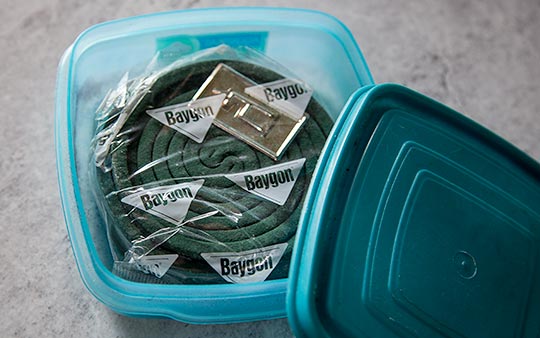 Mosquito coils are a smart thing to pack for travel to many parts of the world. Not so smart is just tossing a box of coils into your backpack or luggage, unless you enjoy the challenge of making bits and pieces of broken coils stay in the coil holder long enough to burn. It took us a few years to figure it out, but you can keep mosquito coils from breaking by putting them inside a hard, reusable plastic sandwich container. Bonus: these tightly sealed container keeps coils from getting damp too and there’s room inside for the little metal stand and some matches.

After years of pretty much being hot all day every day while we traveled through Central America, our Trans-Americas Journey has now entered South America where the presence of things like mountains (hello Andes!) means we can go from sweltering hot at sea level to freezing cold at well over 10,000 feet (3,000 meters) within the same day. That’s why we now travel with an enamel cup and an electric hot water coil. This allows us to crank out gallons of tea right from our room and this has gotten us through many a cold night. We recommend a 24 ounce (700 ml) enamel cup, like this one, because you can make a lot of tea (or instant noodle soup or hot chocolate or whatever) in it but it’s still light and durable. Tip: The metal handle of enamel cups can get hot so you might want to wrap it in handlebar tape.

We love One Drop because it magically covers up even the most egregious bathroom atrocities which comes in handy if we get traveler’s tummy or find ourselves sharing bathrooms in hostels, etc. In Colombia we found a local version, called Oseaan Goticas Aroma, in the toilet paper aisle for US$4 but the label suggested four drops, not just one, and we didn’t think it worked as well as One Drop.