The Virgin of Guadalupe is adored throughout Mexico, especially in early December when the country celebrates the 12 day Virgin of Guadalupe Festival. We joined a celebration in the hills above the town of Ajijic, Mexico for fireworks, tripe soup, and more. 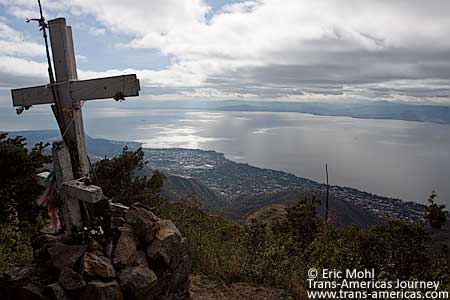 A view of Lake Chapala and the village of Ajijic below a mountain top spot where people celebrate the festival of the Virgin of Guadalupe every December.

In many ways Ajijic, on Lake Chapala, the largest lake in Mexico, is a typical mid-sized Mexican town. The streets are cobbled. The town square is peaceful. The pace is languid. The sun is out pretty much every day of the year. Nobody obeys the traffic signs.

Despite a sizeable (and growing) population of gringos, Ajijic retains a healthy Mexican population as well and they retain a healthy regard for the Virgin of Guadalupe, especially during the festival held in her name every December 1-12. This is a time for Mexicans to honor their own unique religious icon, also known as Nuestra Señora de Guadalupe, which was tolerated by the Spanish conquistadors who figured turning a blind eye to a miracle-working Mexican version of the Virgin Mary was a small price to pay for converting an entire country to Catholicism.

The Virgin of Guadalupe festival in Mexico

It all began on December 12, 1531 when the image of what has come to be accepted as the Virgin of Guadalupe appeared on the cloak of Juan Diego, a peasant who, earlier in the day, had encountered an odd teenage girl who had requested that a church be built in her honor on the hill of Tepeyac. Mexico’s Virgin was eventually invoked by revolutionaries and honored by Popes (there’s a shrine to her in St. Peter’s Basilica in Rome) and today she is perhaps the most ubiquitous symbol in all of Mexico.

December 12 was decreed a feast day for the Virgin of Guadalupe in the early 1800s by Jose Maria Morelos, a priest and rabble-rousing leader of Mexico’s War of Independence against the Spanish. Today, in typical Mexican fashion, the Virgin of Guadalupe celebration has been expanded to encompass the first 12 days of December and her festival is both profound and the not so profound.

On the one hand you can buy a car freshener with the Virgin’s image on it (we did). On the other hand, millions of devoted pilgrims and followers swarm Mexican shrines and temples devoted to the Virgin every year during the annual festival commemorating her miraculous encounter with Juan Diego. Mexico’s Basilica of Guadalupe in Mexico City is the most visited Catholic pilgrimage destination in the world. In 2009 more than 6 million pilgrims traveled there over December 11 and 12–many of them walking for biking long distances.

Celebrating the Virgin of Guadalupe in Ajijic, Mexico

Ajijic’s festivities don’t include millions of people, however, those who do take part make sure they have a good time. We were invited to one of Ajijic’s celebrations of the Virgin which combined some of our favorite things: a good stiff hike, good friends (new and old), and the chance to take part in Mexican hospitality and ritual.

But first we had to get there. 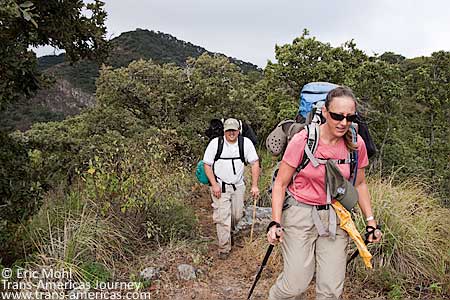 The sun finally came out when we were half way up Mount Chupanya outside Ajijic, Mexico.

We began the steep steady climb in the dark and slowly wound our way up the desert scrub hillsides of the Sierra Madre for about three hours before we reached our destination, a saddle in the mountain with a small shrine to the Virgin that’s been hand-chipped out of a huge boulder. 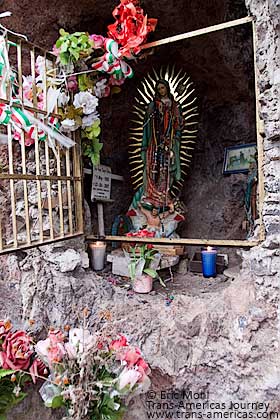 This small Virgin of Guadalupe shrine has been carved out of a huge boulder on Mount Chupanya above Ajijic.

The trail took us past a few stations-of-the-cross markers, through someone’s small hand-worked corn field, and in and out of many different types of vegetation ultimately passing a cluster of crosses, then the summit shortly thereafter. When we got to the top, around 9:30 am, we were shocked to discover that we weren’t the first arrivals. Already hard at work was a group of Mexican men and it was a pleasure to watch (and try to help) as these guys, not necessarily even friends on any other day, worked together seamlessly and resourcefully to turn a narrow, lumpy bit of hill into a party pad.

It was amazing what they accomplished with a few tarps, a knife and some fallen logs. As we watched them build a campfire, create makeshift benches, string up tarps, collect firewood and literally unearthing buried treasure, we thought MacGyver’s got nothing on these guys. 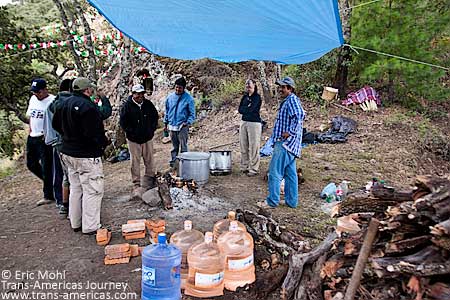 The early arrivals (including us) warmed up by a never-ending campfire between trips into the woods to dig up party necessities that had been cached in the ground over the previous months.

In preparation for the festival, these men and others had been hiking up the mountain from Ajijic and neighboring communities for months with enormous bottles of purified water, huge soup pots, bottles of tequila and many other necessities that were the makings of a party which was expected to attract 200 people.

An entire banda band (typically at least eight musicians) would hike up with their instruments some time in the wee hours when they were done playing at parties down in town.

Two vital ingredients that couldn’t be cached in the ground ahead of time were fireworks and noise makers. No celebration in Mexico is complete without setting off copious quantities of bombas (extremely loud creations that look like giant bottle rockets) and fireworks or cuteras that come with names like vampiros. During the 12 day Guadalupe Festival even priests set the things off at their churches.

It wasn’t long before other men began arriving, huffing up the hill carrying huge baskets full of bombas and cuteras on their backs. All told, about 300 of the things were ultimately amassed at the top. Almost immediately one guy began lovingly sorting, piling, and covering them. Then he began lighting them, usually four or five in a row from extremely close range. 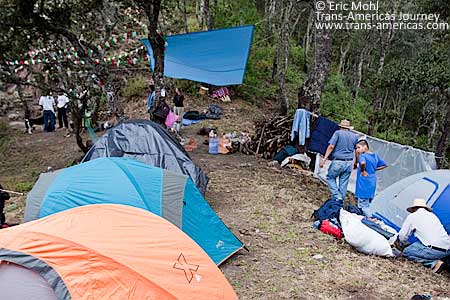 The faithful pitched tents for the 24 hour mountain-top Virgin of Guadalupe fiesta above Ajijic. That’s our orange Coleman tent in the lower left hand corner.

By noon it was drizzling and Tom was sorry he hadn’t bothered schlepping his tent up the hill. However, he kept miraculously dry under a crudely strung up bit of plastic even after the drizzle turned to a true rain. In large part due to the rain, this year’s Chupanya Virgin fiesta attracted far fewer than 200 people and the banda band arrived late and in reduced numbers. But by dawn they were set up gamely in front of the shrine where they belted out loud, rollicking, slightly-circus-like banda tunes, even though the rain kept the tuba player at home.

Check out our video of the Virgin of Guadalupe celebrations above Ajijic, below.

At some point in the soggy night the party crew had begun simmering an enormous pot of menudo (a slow-cooked soup made with tripe) and a equally impressive pot full of cafe olla (a Mexican spiced and simmered cowboy coffee). We’ve had menudo before and we’ve made peace with the fact that we just don’t care for tripe (cow stomach), but we do like the broth so we breakfasted on a couple of bowls of rich broth (puzzling our fellow revelers by politely refusing the tripe), then we packed up our wet gear for the hike back down.

A fireworks finale for the Virgin

A few days later we found ourselves at another Virgin celebration, this one slightly more urban, in the village of San Antonio next to Ajijic. It was December 12, the culmination of the 12 day festival, and San Antonio, like virtually every other city, town and hamlet in the country, was marking the day with a big fireworks display at the entrance to the church. 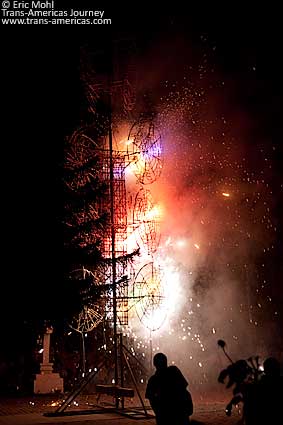 The Virgin of Guadalupe Festival in San Antonio on Lake Chapala culminated, as so many Mexican festivals do, with a castillo (fireworks tower).

As if to enhance the experience, the power miraculously went out in San Antonio, plunging everything into darkness–the perfect backdrop for the huge castillo or intricately built tower of spinning wheels and fancy shapes which would be brought to life with one flick of a match. 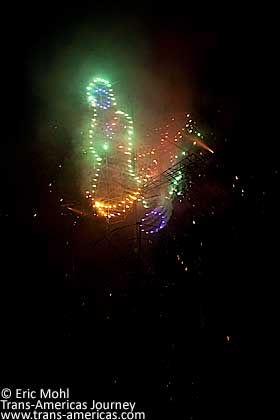 The fireworks finale of the Virgin of Guadalupe Festival in San Antonio on Lake Chapala.