A River Ferry Adventure Up the Amazon – Iquitos to Yurimaguas, Peru

Iquitos, Peru is the largest city in the world that’s not connected by road. The only travel options in and out of Iquitos are via air or the river. We flew into Iquitos, so we decided to take the Amazon River out from Iquitos to Yurimaguas. This meant taking a four-day journey on a river ferry in hammocks on an open deck. Here’s what to expect (and bring) on this languid and low-cost Amazon adventure. 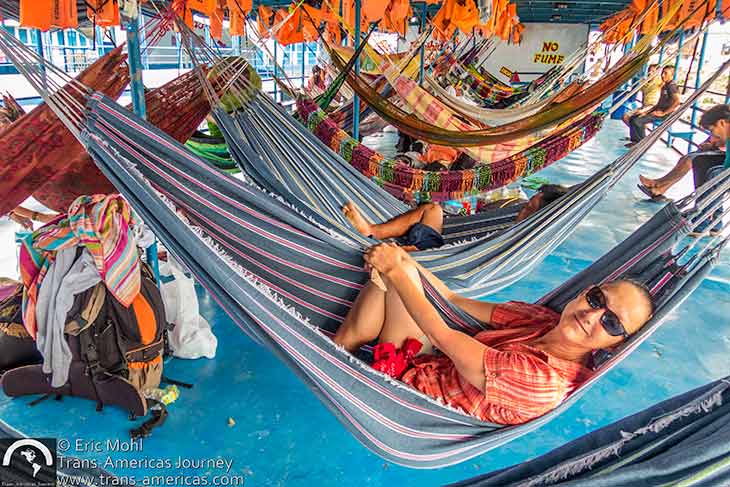 Karen getting a feel for her hammock.

Our 3-night/4-day journey took us up the Amazon, Marañón, and Hullaga rivers as we traveled very slowly from Iquitos (check out our Iquitos City Travel Guide to plan your time in the city before or after your ferry journey) to Yurimaguas. Though these two cities are separated by just 241 miles (388 km) directly, it’s an ambling 395 mile (636 km) trip via the winding rivers. Along the way, we traveled through the Pacaya-Samiria National Reserve, passed riverside villages, and got to know an onboard cast of characters. River ferry travel like this is akin to the local bus for anyone and everyone who needs to travel within a more than 3,000 mile (4,900 km) swath of roadless Amazon. Here’s how our lazy Amazon River ferry adventure spooled out. 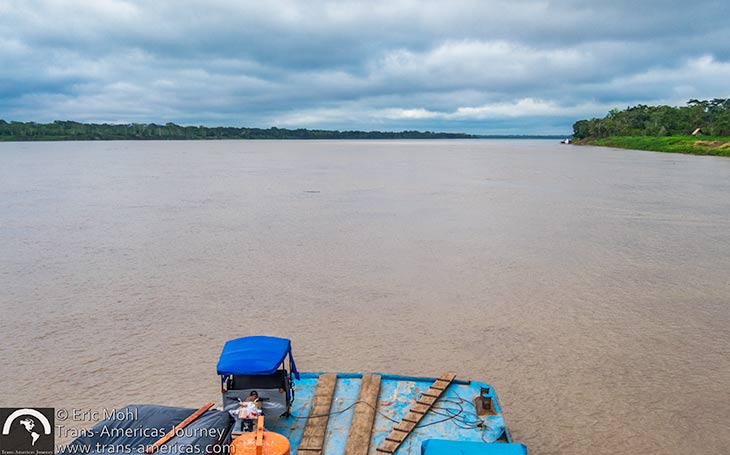 The back of our ferry on the Marañón River.

We boarded our ferry, which was docked next to another ferry that was entirely loaded with crates of live chickens, in the litter-strewn Mamusa port outside of Iquitos. We got on board three hours early to claim spots for our hammocks on the open-air deck. A handful of vendors passed through the ferry selling essentials including hammocks, toilet paper, homecooked meals, and water, but we’d already stocked up at shops near the port and in Iquitos (see our handy list of what to bring at the end of this post). 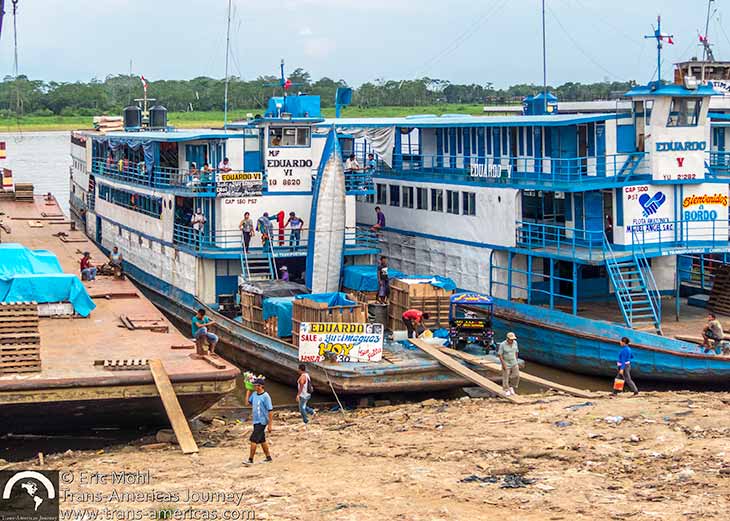 Our ferry (on the left) in the Mamusa port near Iquitos.

The ferry pulled away and merged roughly into the Amazon River at 5:30 pm. Passengers were promptly informed that there would be no food service on board until breakfast the next day. No reason was given. We settled into our hammocks and took stock of our fellow passengers. 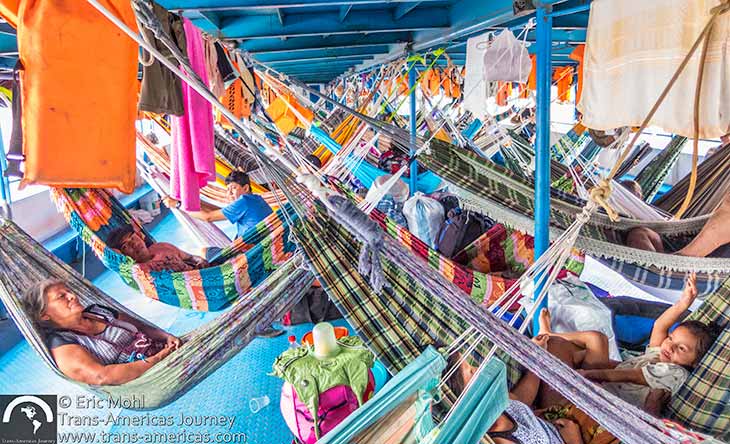 Passengers on our ferry were mostly male and mostly local. However, there were eight other foreigners on the ferry, and on our deck (deck three, the upper passenger deck), there were also a few local women and children including a newborn. There were two large trash cans on our deck, but no one seemed to use them. The mother of the newborn, for example, kept tossing used diapers overboard.

The cargo on the ferry, which was loaded onto the first deck, consisted of sodas, bags of cement, and huge crates of fish on ice which we prayed wouldn’t melt prematurely. The shared bathrooms were, theoretically, separated: one for men and one for women. However, the men were soon using the women’s toilets and showers and things got filthy and disgusting quickly including standing dirty water on the floor and iffy flushing. The shower was an open spigot (no showerhead) in the wall that dumped cloudy river water. 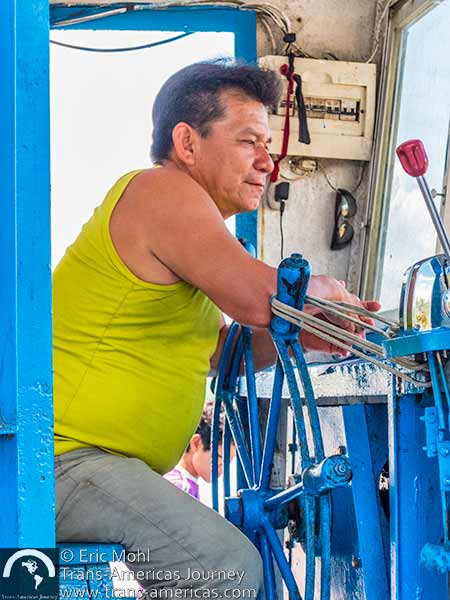 Our captain dressed for duty.

The ferry captain was wearing a bright green tank top that he liked to pull up over his basketball-like belly. He assured us that he “knows every curve” in this ever-changing river, which was a good thing because, as dusk turned into night, it was clear that he (like many river captains we’ve known) preferred to navigate with no lights. There were life jackets on the ferry and one 30-person lifeboat was lashed to the front of the ferry in a way that looked way too complicated to deploy quickly. Never mind that there must have been nearly 100 people on board. 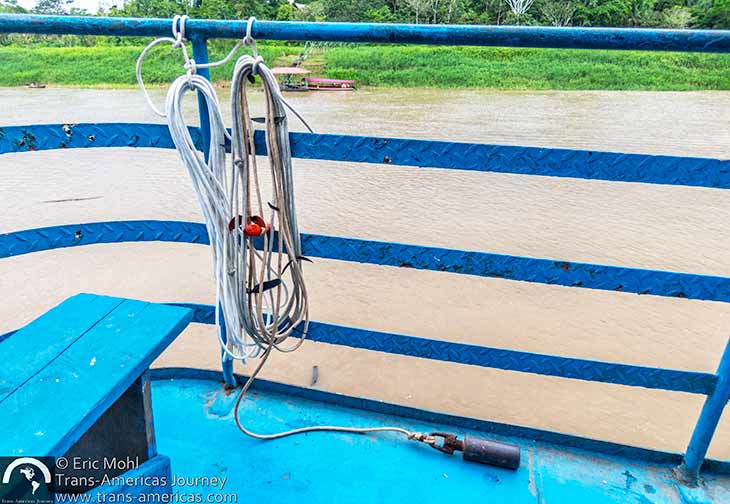 That weighted rope with incremental markers on it is a 2,000-year-old method of depth sounding which the captain used to navigate the ever-changing rivers.

Our first night in the hammocks passed peacefully with no loud snorers and, surprisingly, no bugs. At 6:30 am we awoke to a loud buzzer which announced that breakfast (sort of) was served (sort of). Passengers ran down to the second deck to form a line and we each got a glop of grey gruel and a roll made mostly of air. No coffee. That was only made at night to keep the captain and crew awake. 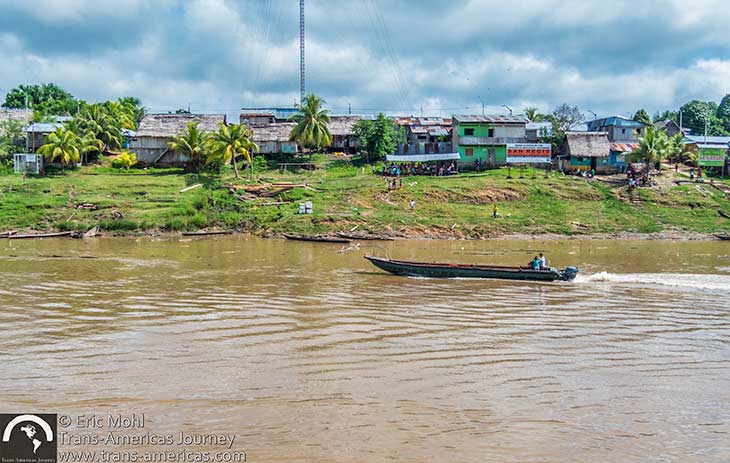 One of many riverside villages.

Notably, kitchen staff members were all proudly effeminate and they jazzed up the otherwise dreary meal time with tramp stamps and bleached highlights. One wore Barney purple pants held up with a flashy white belt for the entire journey. It was as if the kitchen was also the green room for Drag Race Peru. 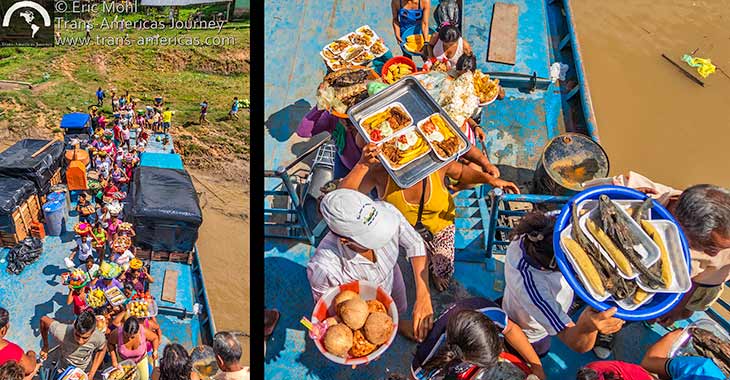 Cafeteria-style meals can be purchased from the ferry kitchen but local vendors are also allowed on board to sell home-cooked meals, sodas, fruit, and more.

Eating and drinking options expanded significantly when the ferry docked momentarily near a village and people rushed on board hawking sodas, fruit, even full plates of home-cooked meals before scurrying off again a few minutes later. A tiny tienda on the ferry also sold stale junk food and tepid beer. 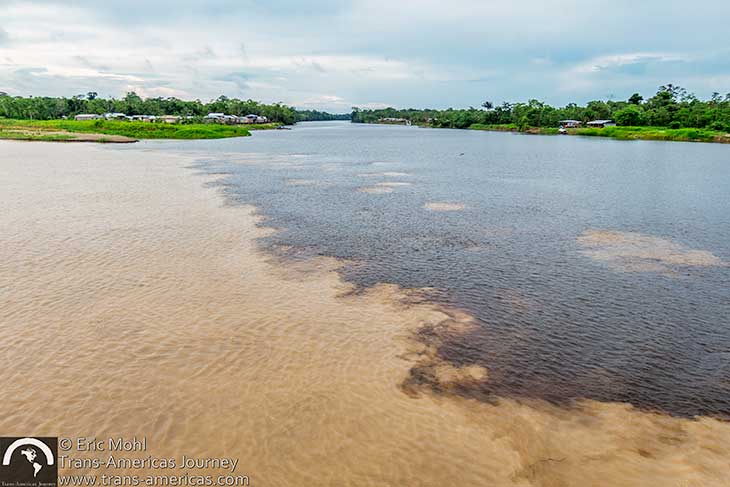 The milky Marañón River meets a smaller coffee-colored river in a dramatic confluence.

The confluence of the Marañón River and the Ucayali River is widely considered to be the beginning of the Amazon River (though Brazilians insist that the Amazon River begins at the city of Manaus). From this confluence onward, we were heading up the Marañón River and we soon entered Pacaya-Samiria National Reserve which protects 8,000 square miles (20,800 square km) of Amazon rainforest.

For the next two days, we traveled 200 miles (320 km) on the Marañón River. Everything on the left-hand side of the boat (as we headed upstream) was within the boundaries of the Pacaya-Samiria National Reserve. We focused our attention on the lush jungle on the park side of the river and spent many pleasant hours spotting ringed kingfishers, herons, black-collared hawks, crested caracaras, ospreys, blue-and-yellow macaws, parrots, and many more birds we couldn’t positively identify. We also got fleeting glimpses of a few pink river dolphins. 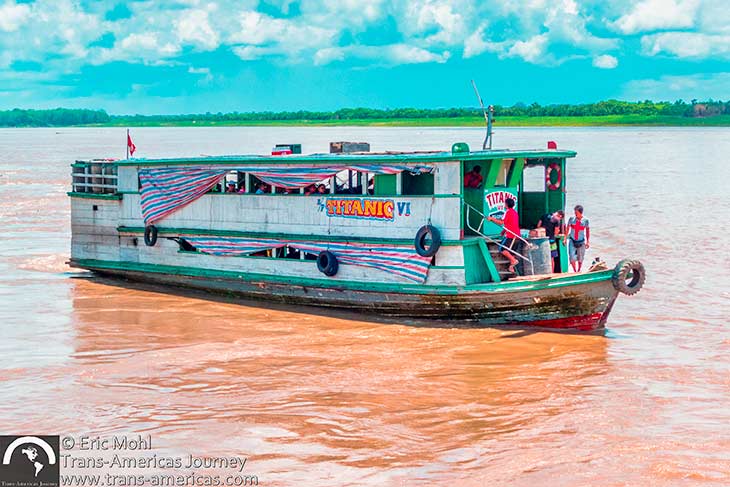 Luckily there are no icebergs in the Amazon… 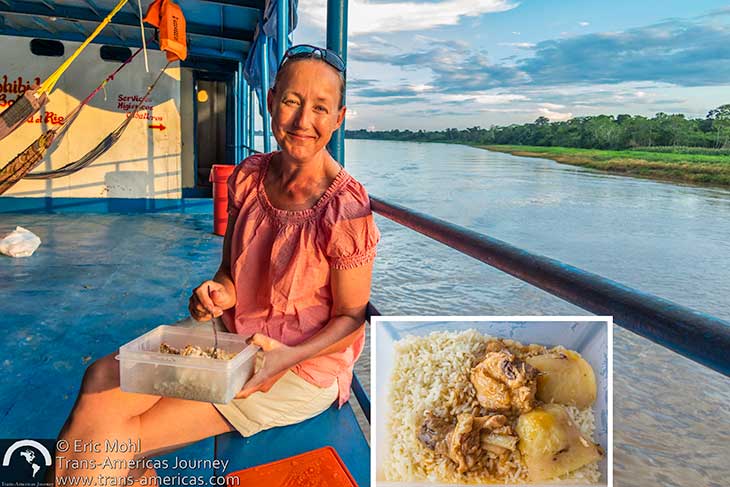 Sunset dinner of rice, chicken, and potato (see inset). The view was great and the food was passable.

At noon, the meal buzzer went off again for a serving of rice with pieces of chicken and potato. With that safely in our past, we went back to watching the scenery, aka Amazon Ferry TV. For the rest of the afternoon, mile after mile and hour after hour, we got into the rhythm of the river as it’s chocolate-milk-colored water flowed past eroded banks and vast expanses of vibrant green. We saw only a handful of other boats. 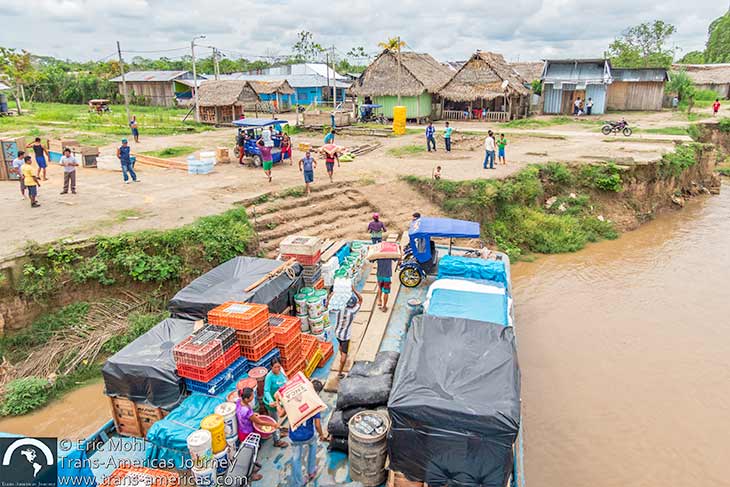 Our Amazon River ferry making a quick stop at a local village.

Then, at 4:30, the dinner buzzer went off and it was time for another portion of the same food we had at lunch. Sadly, we didn’t make it through the second day before someone clipped their toenails on deck. Even worse? In the middle of the night noise and movement woke Karen up and she saw a crew member toss at least three huge plastic bags of trash overboard into the river. Each bag made a sickening plop and splash as it hit the surface of the water. 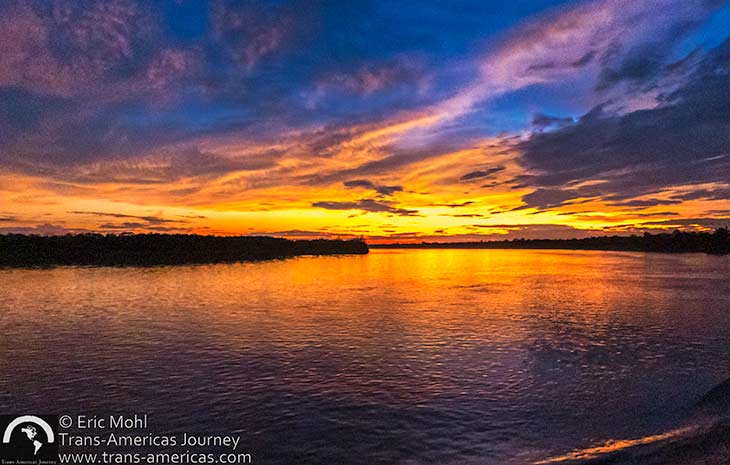 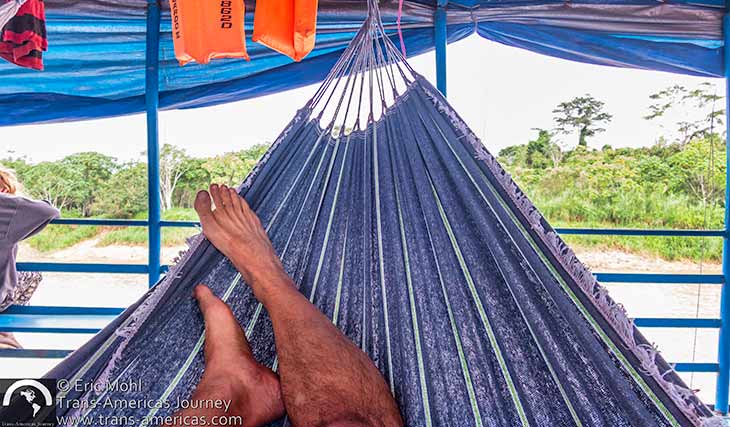 It didn’t take long for this hammock view to get monotonous.

Late that night Karen spotted staffers dumping more trash bags into the river, right next to a big sign that read “No Bota Basura al Rio” (Don’t Throw Trash in the River). This time we managed to get a few sly photos of the dumping and when we got off the boat we figured out which Peruvian government agency to report the trash dumping to. We were promised a response when any action was taken, but we never heard back from anyone about it again.

Day 4: Let us off this boat

Overnight, the captain had navigated off the Marañón River and onto the Huallaga River and we left the boundaries of the national reserve. As we crept nearer to our destination, the riverbank became more populated and our ferry began making stops to drop off and pick up locals. As passengers neared their villages, they began to shake off the ferry. Hair was combed. Shirts were tucked in. The end was nigh. 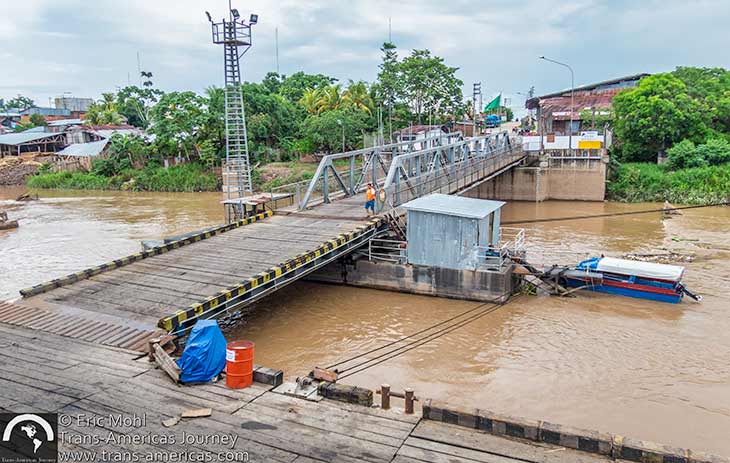 The ferry port in Yurimaguas, Peru.

At noon, we arrived at our destination near Yurimaguas where the road begins providing access to the nearest city (Tarapoto) and the rest of Peru. We were only four hours late. From the port, it’s a short moto-taxi trip to the center of town where the minibus depot to Tarapoto is located. All in all, taking a 3-night/4-day river ferry ride on the Amazon was like camping in a crowded and dirty campground that moves. But it did the trick.

We booked passage on the Eduardo VI ferry operated by Transportes Eduardo on the third deck in hammock class which was just under US$40 (per person). Tickets were half that price for passage on the over-crowded second deck which is also where the kitchen and snack shop were located. We also booked a tiny private cabin on the third deck solely to stash and lock up our luggage because we were traveling with cameras and computers. For an extra US$8 per day per person, the peace of mind was worth it.

The filthy, stuffy cabin was not a pleasant place to spend time but it did keep our stuff secure, provided a private place to change clothes, and was a place to pass a few hours reading at night because the cabin was equipped with a bright light while the hammock deck was kept dark. 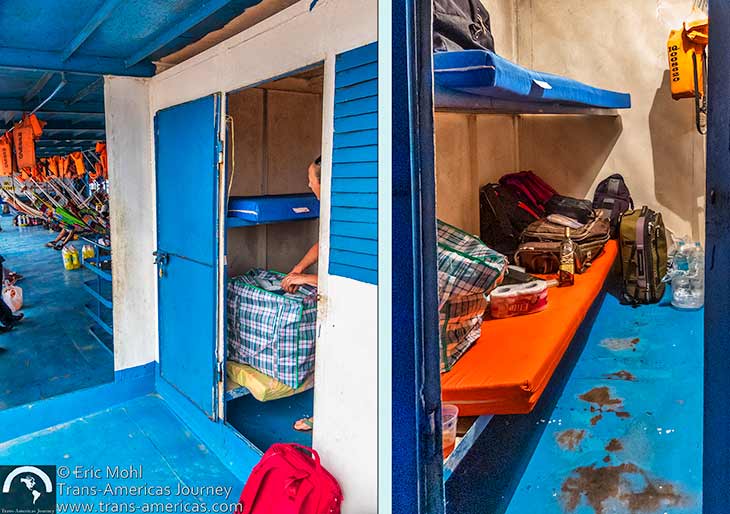 We also booked this filthy, stuffy cabin to serve as a place to keep our stuff secure and a private place to change clothes.

We purchased our tickets from the Transportes Eduardo office at the Mamusa port a couple of days before departure. You can purchase tickets on board at a slightly lower price, but it was worth the small mark-up to guarantee our tickets beforehand. Once onboard, we booked the cabin and bought our meal tickets.

You must board your ferry at least two hours before departure time, but if you’re traveling in hammock class arrive even earlier because hammock spaces are not reserved. We boarded the ferry three hours early and our deck was already crowded with hammocks.

The ferry travels upriver from Iquitos to Yurmiaguas and downriver in the other direction. During high water conditions (December through March), the upstream trip is even slower and the downstream trip is faster.

All of these items are available in the large shops lining the road to the port or in Iquitos.

And if you don’t want to keep the items you’ve purchased for your river ferry adventure, you’ll be able to easily find local families on board who will be delighted to inherit your kit once you reach your destination. We gave nearly all of our stuff to a mother and her two small children.