Chichén Itzá, one of the greatest Mayan cities ever built, is the second most visited archaeological site in Mexico. Tens of thousands of people once lived here and, at times, it can feel like there are that many tourists at the site. Here’s why it’s worth braving the crowds and how to avoid some of them. 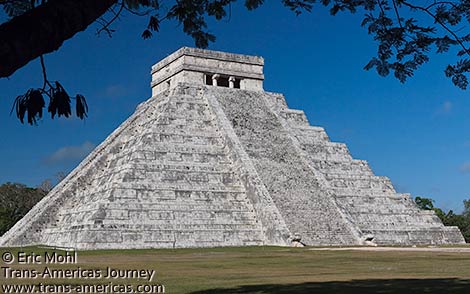 Chichén Itzá’s Temple of Kukulkan (the Maya name for Quetzalcoatl), is often referred to as El Castillo (the castle).

Chichén Itzá is a pre-Columbian site and geeky Indiana Jones types believe 50,000 Mayans may have lived here at the city’s peak. Today it’s a huge, well-groomed site with a lot of rules and a lot of ropes preventing visitors from getting too close to most structures. And you can forget about climbing to the top of anything. Here are some highlights. 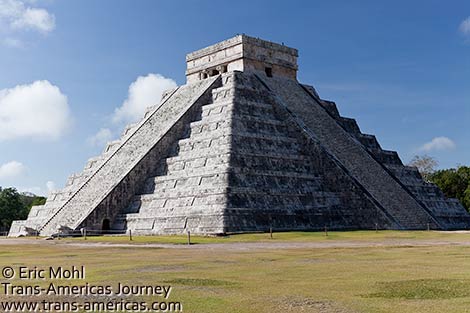 Temple of Kukulkan (the Maya name for Quetzalcoatl), often referred to as El Castillo (the castle). 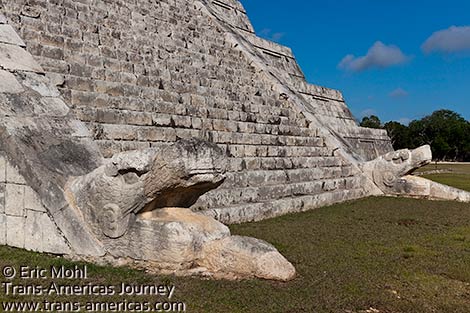 On the Spring and Autumn equinoxes, at the rising and setting of the sun, the ingeniously engineered staircase on this temple casts a shadow in the shape of a plumed serpent – Kukulcan, or Quetzalcoatl – which appears to slither down the stairs. 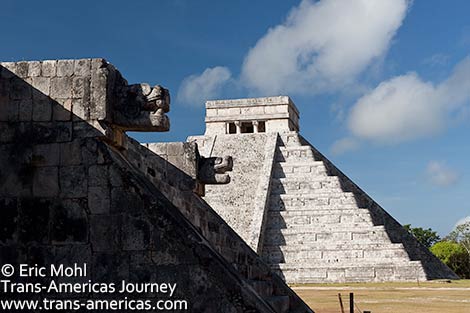 The Venus Platform with the Temple of Kukulkan in the background. 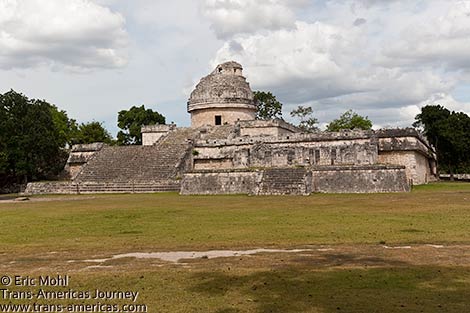 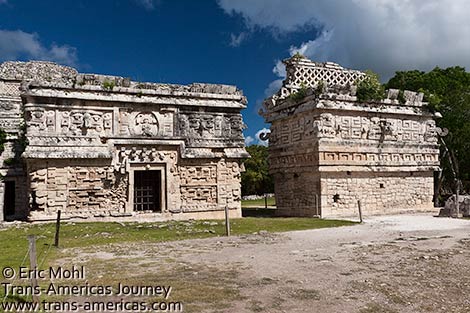 Part of the Las Monjas (nunnery) group is an ornate small temple called La Iglesia (the church), decorated with elaborate masks of the rain god Chaac. 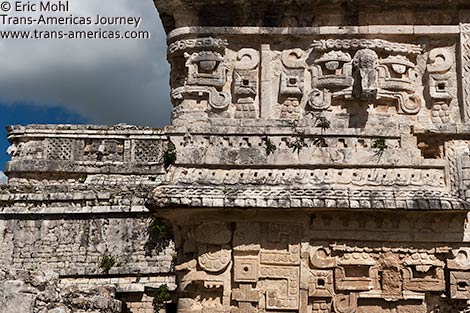 Detail of the small temple called La Iglesia (the church), decorated with elaborate masks of the rain god Chaac. 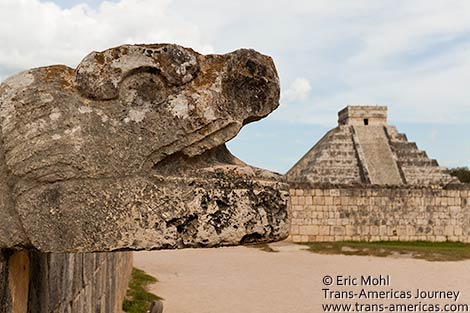 A serpent head in the Great Ball Court at Chichén Itzá with the Temple of Kukulkan in the background.

Your entry ticket to Chichén Itzá includes the price of the nightly sound and light show whether you want to see it or not. We’re not usually into those things since they’re inevitably cheesy and some archaeological experts believe they damage the ruins. However, since we’d already paid for it we decided to check it out. 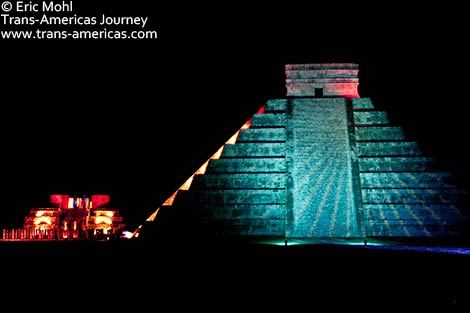 Are you ready for the Sound and Light show on Temple of Kukulkan and Templo de los Guerreros (Temple of the Warriors) at Chichén Itzá?

See the sound and light show at Chichén Itzá for yourself in our video, below, taken during the hour-long spectacle.

Where to sleep near Chichén Itzá

When our friend Pancho told us that he knew the family that “owns Chichén Itzá” we thought something must have been lost in translation. After all, nobody owns something like Chichén Itzá, right? Wrong.

The Barbachano family literally owned Chichén Itzá until March 2010 when they sold just over 200 acres, covering the core area of the site, to the Yucatan government for 220 million pesos (just shy of USD$18 million). 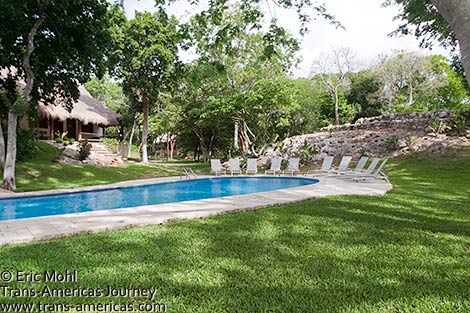 Our room at The Lodge at Chichén Itzá is in the upper left of this picture and, yes, that mound of rocks just off our deck is actual Mayan ruins.

The Barbachano family may have sold the Chichén Itzá site, but part of the family has retained a number of hotels situated right on its doorstep. In fact, their Hotel Chichén Itzá, built in 1923, is the first hotel ever built within an archeological site. Over the decades it’s hosted the likes of Jacqueline Kennedy.

We stayed at The Lodge at Chichén Itzá, which is also owned by the Barbachanos and run through their Mayaland Resorts group. When musicians play concerts at Chichén Itzá this is where they stay—which explains the Elton John room (huge wet bar, raised king size bed, double jetted tub) and the Placido Domingo suite.

Sarah Brightman also stayed here when she performed at the ruins and the hotel management is assuming that Sir Paul McCartney will continue the tradition and stay at the hotel when he comes to perform at Chichén Itzá in 2012. 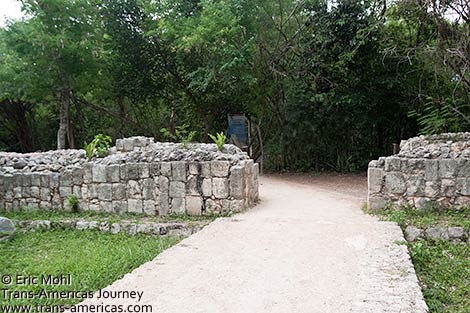 Guests at The Lodge at Chichén Itzá have the use of this private entrance to Chichén Itzá, avoiding the turnstiles and crowds of the main entrance.

Our room made us feel like stars with tons of space, a Jacuzzi tub, a virtually private pool, and (best yet) a huge rocky mound of unexcavated Mayan ruins just off our patio. As hotel guests, we also got to use the hotel’s much more pleasant private entrance to Chichén Itzá which allowed us to avoid the bus crowds and hawkers at the main entrance to the site. We wandered over to the main entrance once, however, to check out the museum which was closed with no opening date posted.