You can explore the Osa Peninsula in Southern Costa Rica from two main gateways: Puerto Jimenez on the east side and Drake Bay on the west side. Both gateways give you access to Corcovado National Park, but in very different ways. We first traveled to Puerto Jimenez and explored this wild peninsula from that side. Then we headed for Drake Bay to see how the other half lives. 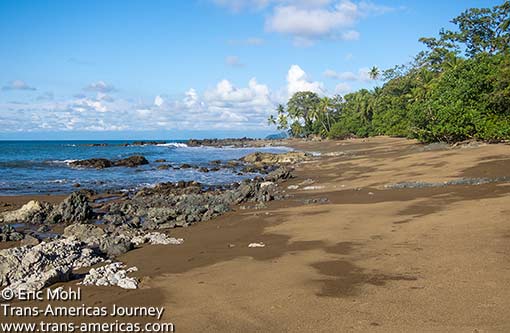 A  pristine beach down the coast from Drake Bay on the Osa Peninsula in Costa Rica.

Drake Bay, with its bustling fishing village, hotels and guesthouses, sport fishing operations, even a 13 platform zip line, felt busier and more built-up than the Puerto Jimenez side of the peninsula. However, Drake Bay is still one of the least visited areas of Costa Rica and the wildlife that the Osa Peninsula is famous for is all around you–you just have to get out of Drake Bay to see it. Luckily, that’s easy.

From Puerto Jimenez our explorations of the Osa had been on foot and we never really entered Corcovado National Park at all. On the Drake Bay side of the peninsula it was all about water access and we finally got into the park itself on a day trip to the San Pedrillo Ranger Station entrance of Corcovado National Park which started off with a 30 minute boat ride (US$85 per person including boat, guide, lunch, and US$10 per person entry fee). 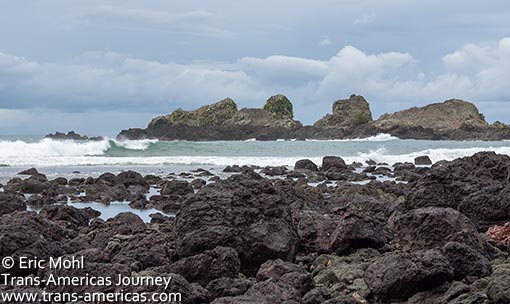 Rugged coastline within the boundaries of Corcovado National Park on the Osa Peninsula in Costa Rica.

From there we waded through water to reach a hump of high ground covered in secondary forest and primary forest which we walked through for about an hour and a half spotting spider monkeys, tree frogs, agoutis, and lots of birds including squirrel cuckoos and mangrove cuckoos.

We were hoping, as we always do, for a glimpse of a tapir as well. They’re known to live in Corcovado but they’re most common at the La Sirena entrance which is more difficult and more expensive to get to from Drake Bay.

The flat, shaded, slightly muddy trail ultimately spit us out on the beach which we walked along before heading back to the San Pedrillo Ranger Station for a picnic lunch with ocean views. 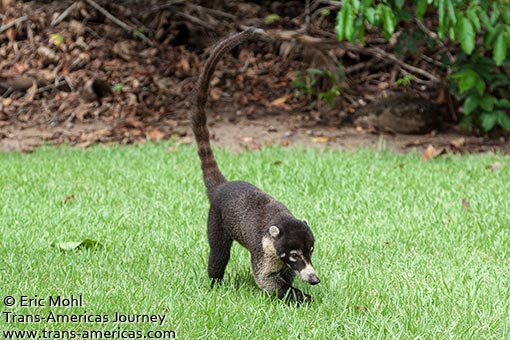 A white-nosed coati roamed around as we ate lunch on the grassy picnic area in front of the San Pedrillo Ranger Station entrance of Corcovado National Park in Costa Rica.

After chowing down and watching the antics of a disturbingly tame white-nosed coati looking for handouts, we hiked up a different trail for about 20 minutes to reach a lovely waterfall and swimming hole. However, we were almost stopped in our tracks by soldiers. 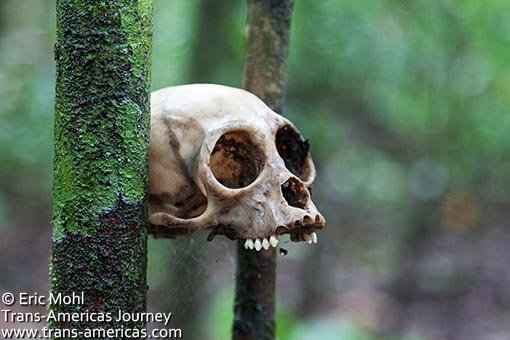 A monkey skull along the trail in Corcovado National Park in Costa Rica.

About midway up the trail to the waterfall we noticed that the ground appeared to be moving. It only took a split second to realize that millions of army ants were swarming all around us. We didn’t need to wait for our guide to tell us to run and we all sprinted through the seething mass. Miraculously, only a few of us got bit. 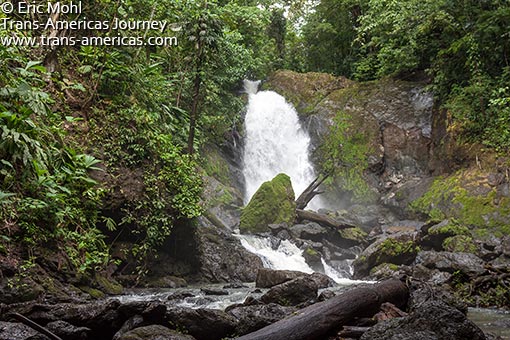 On our way back down the trail, after a refreshing dip in the swimming hole below San Pedrillo waterfall, we found that the army ants were still swarming over the trail right where we’d left them. This time we conceded defeat and bushwhacked our way through the undergrowth off the trail, giving the ants a very wide berth. 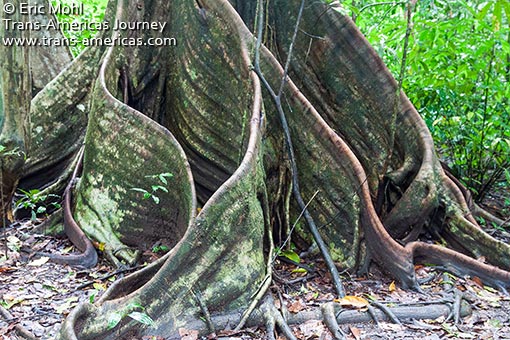 In the shallow soil of Corcovado National Parks trees need buttressed roots like this to help keep them upright. 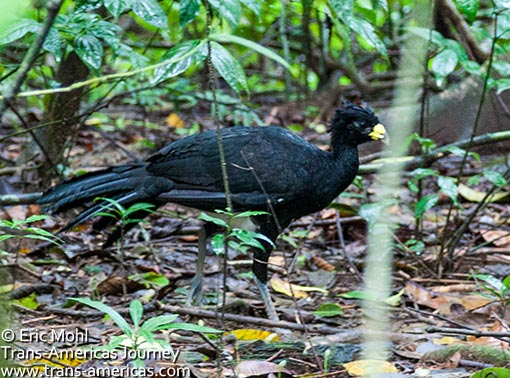 A great curassow in Corcovado National Park in Costa Rica.

Way too close for comfort

Our encounter with the army ants was nothing, however, compared to Eric’s stand-off with a pack of wild peccaries.

It all started when Eric headed out on a trail to explore more of the bays and beaches around Drake Bay. He rounded a bend and saw some white-lipped peccaries on the trail in front of him. We’ve seen (and smelled) peccaries in the wild before but this time was different. Instead of giving Eric a cranky glare then going about their business, these peccaries, which look like boars or wild pigs but aren’t, quickly closed the ground between them and Eric causing a face-off between man and a whole mess of beasts. 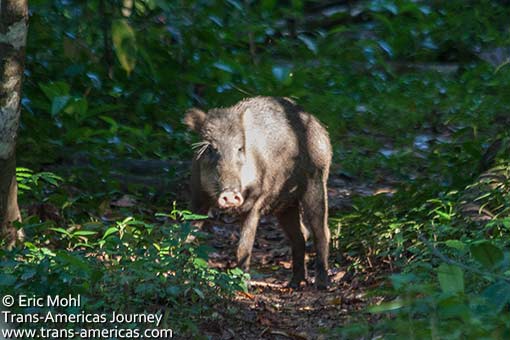 Just one of the white-lipped peccaries that menaced Eric on a trail near Drake Bay on the Osa Peninsula in Costa Rica.

We later learned that run-ins with packs of peccaries 50 or more strong are not unheard of in these parts. We’re not sure how many were in the pack that Eric encountered but they were clacking their self-sharpening tusks alarmingly and a few came to within 5 feet of him.

We only have one or two pictures of this pig/man face off because Eric was actually swinging his camera around as a form of defense. Though the most common advice in a situation like this is to climb a tree, Eric sought higher ground by walking uphill and the groundskeeper of a nearby hotel showed him a trail that dropped back down onto the main trail beyond where the peccaries were located. 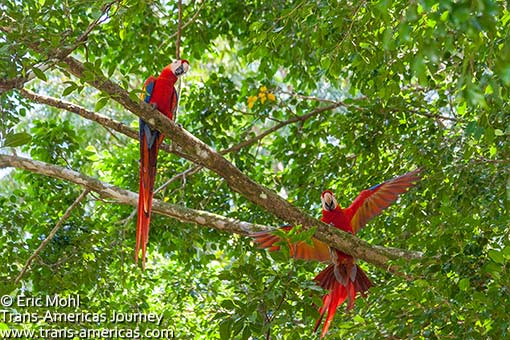 You can drive right to Drake Bay or even fly in. We chose to make our Drake Bay entrance by boat from Sierpe and what an entrance it was. After parking our truck in the guarded lot at the boat dock in Sierpe we headed down the Sierpe River in a open-sided boat. 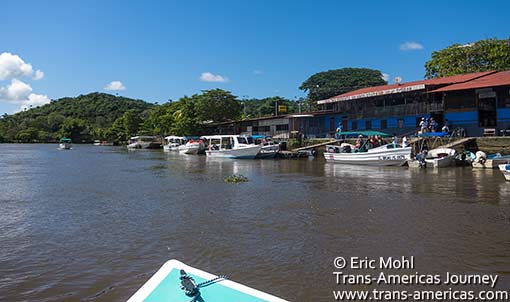 Leaving the town of Sierpe in our boat, headed for Drake Bay.

We sped past huge crocodiles and trees full of birds along mangrove-lined waterways. Eventually, the river started widening as we approached the mouth of the river where it flows directly into the Pacific Ocean. 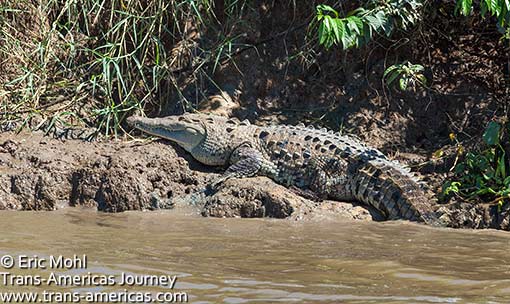 Massive crocs like this were a common sight during our boat ride up the Sierpe River to Drake Bay.

At this point, the captain told us to put on our life vests. It can be a rough ride when rivers meet oceans but we made it through without even getting splashed. We scanned the surface for signs of dolphins and soon the calm arc of Drake Bay came into view. 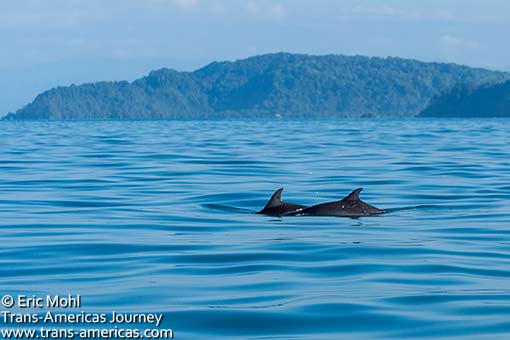 Our boat dropped us off at Aguila de Osa Inn, which we’d chosen because the hotel is part of the Greentique Collection of sustainable hotels and because we simply had to meet owner Bradd Johnson. Bradd opened the lodge 20 years ago making him a card-carrying member of the Costa Rican Eco-Tourism Early Adopters Club. Okay, we just made that club up, but it really should exist.

Bradd, a super gregarious US native, originally bought property on the mainland of Costa Rica before realizing that Drake Bay was poised for an eco-tourism boom and could use a decent hotel. The eco part evolved along with Bradd’s awareness and is now a major focus.

Of course, they recycle, but with a twist. Recyclables are given to local school children who collect the money for the items and use it to improve their schools. All guests get a corn-based, totally biodegradable, and reusable water bottle. All staff members are from the local community. 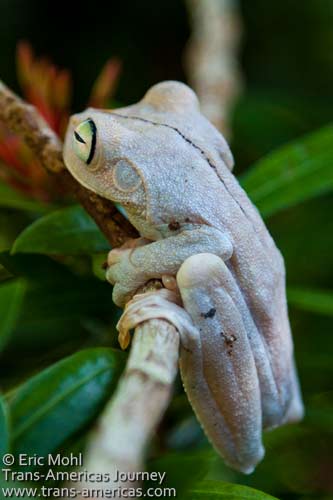 A gladiator tree frog spotted on the grounds of the Aguila de Osa Inn in Drake Bay, Costa Rica.

Aguila de Osa’s 11 rooms and two suites have gorgeous floors and handmade furniture in woods that are no longer available but were plentiful during construction and much of the hotel was built by hand. Though Bradd brought in a full arsenal of power tools his local workforce preferred their own traditional tools.

Many of those original construction workers went on to full-time jobs at the hotel and some of the staff have been with Bradd since day one, which is part of the reason the service at Aguila de Osa is so natural and polished.

The same can be said for the food. Rates are all-inclusive and you will not go hungry. Meals are huge, delicious, and varied. Beware of the never-empty cookie jar!

Another reason we chose Aguila de Osa is its private location and surrounding jungle which gives it a great feeling of remoteness from Drake Bay even though the village can be reached on foot in less than 10 minutes. We saw frogs, sloths, and scarlet macaws in the trees and landscaping near our room. And speaking of rooms…be aware that the rooms at Aguila de Osa are reached via a series of fairly steep ramps and staircases. 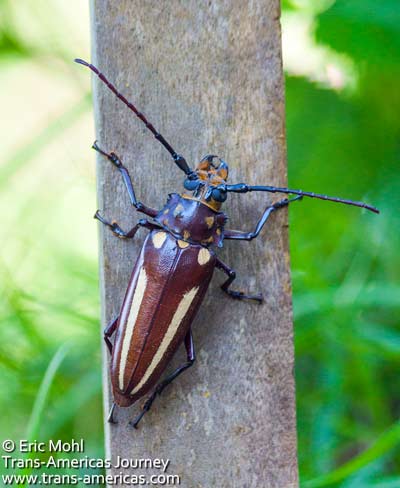 In his spare time (ha!) Bradd helped form the Corcovado Foundation which works with Costa Rica’s national park service and local communities to stop illegal logging and hunting which still threatens the area.

When we weren’t in Corcovado National Park or being menaced by peccaries we took advantage of Aguila de Osa’s free kayaks and paddled the languid waterways right off the hotel’s dock where we had the natural wonders of this area all to ourselves. 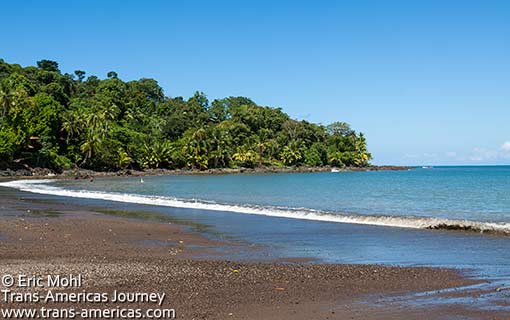 The calm waters and arcing beach of Drake Bay.

You may read accounts of the horrors of the roads on the Osa Peninsula. We sure did. However, we drove nearly the entire peninsula and found 99% of the roads to be paved and in perfectly acceptable shape. Even the shortcut road that bisects the peninsula between Puerto Jimenez and Drake Bay is said to be good these days. We chose to drive the long way between Puerto Jimenez and Sierpe (roughly three hours) because we wanted to take the boat from Sierpe to Drake Bay, and we’re glad we did.

Be aware that small cruise ships (60 passengers or so) do sometimes stop at Drake Bay and the trails and picnic areas at the San Pedrillo entrance of Corcovado National Park can get very, very crowded when there’s a ship in port.

Oh, and Drake Bay was named after Sir Francis Drake but some locals give his last name a Spanish pronunciation so don’t be surprised if you hear it referred to as “Drah-kay” Bay. 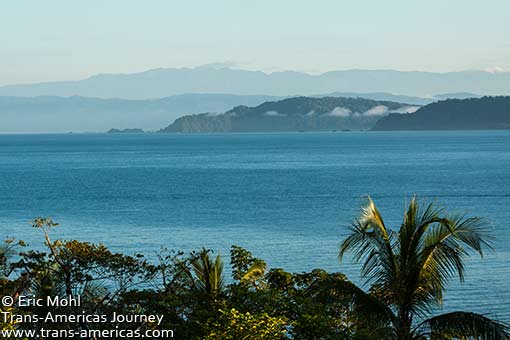 The Costa Rican mainland seen from Drake Bay, with Cerro Chirripó, the highest mountain in Costa Rica, in the distance.